Moscow will have "no choice" but to strike at "decision-making centres" - which may mean outside of Ukraine - if Kyiv uses long-range missiles received from the US against Russian territory, Dmitry Medvedev has warned.

The former Russian president and current deputy head of the Russian Security Council made the comments in an interview with Qatari TV channel Al Jazeera on Friday, in which he also invoked the "Horsemen of the Apocalypse".

"If these types of weapons are used against Russian territories, the armed forces of our country will have no choice but to act to defeat decision-making centres," he said, according to translated comments from state-owned news agency TASS.

"Everyone understands what kind of centres these are – this is the Ministry of Defence, and the General Staff, and anything else. But you need to understand that the final decision-making centres in this case, unfortunately, are not even located on the territory of Kyiv. Therefore, this is certainly a threat that will need to be taken into account."

“This isn’t a forecast, but what’s already in play. The horsemen of the apocalypse are galloping ahead and we can only look towards God.”— Dmitry “Full Metal” Medvedev to Al’Jazeera today. [not a joke, that’s what he said. He even posted this on his own tg. Wat mean? Dunno] pic.twitter.com/SQFjUjJyqP

Medvedev's warning was prompted by US President Joe Biden's announcement on Tuesday that America would provide long-range missile systems to Ukraine, reversing course from just a day earlier.

Writing in The New York Times, Biden said he would "provide the Ukrainians with more advanced rocket systems and munitions that will enable them to more precisely strike key targets on the battlefield in Ukraine".

The White House National Security Council confirmed he was referring to multiple-launch rocket systems (MLRS), which officials said were capable of reaching Russia but were not intended for that purpose, NBC News reported.

The Pentagon spokesperson told the outlet Ukraine had agreed not to use the weapons, which have a range of about 70km, to launch rockets into Russia.

Different versions of the MLRS have differing ranges, from around 30km up to 300km.

On Monday, Biden had ruled out giving Ukraine long-range missiles.

"We're not going to send to Ukraine rocket systems that strike into Russia," the President said in remarks at the White House.

Republican Senator Lindsey Graham had criticised the decision, saying failure to send Ukraine the rockets was "a betrayal" of Ukraine and "democracy itself".

"Ukraine is not asking for American soldiers – just advanced weapons to protect and defend themselves from Putin's invasion," he tweeted.

On Monday, Medvedev praised Biden, saying it was "rational" for the US not to provide Ukraine with long-range rockets, Newsweek reported.

Writing on Telegram, he warned that Moscow would "have struck at the centres of these criminal decisions" if Russian cities were struck.

After Biden's U-turn, speaking to Al Jazeera on Friday, Medvedev said Moscow was concerned about the change in Washington's position on the supply of weapons to Ukraine.

"At first, President Biden said that they would not supply multiple-launch rocket systems, MLRS, especially advanced ranges," he said.

"And then this position was adjusted, and it was announced that, in any case, certain types, such as HIMARS [High Mobility Artillery Rocket System], would be delivered."

Although these "do not have such a long area of destruction, not such a range as some other systems ... it still poses an obvious threat" to Russia, he said. "The Americans stipulate this by saying that these systems will be used only on the territory of Ukraine, but for obvious reasons they do not fully control those decisions, in any case, which are applied and adopted by the Ukrainian authorities," he said.

"Therefore, this is, of course, a threat, we must respond."

He added: "These are not forecasts, this is something that has already happened. This can be looked at in different ways, but we can assume that the 'Horsemen of the Apocalypse' are on their way and we can only hope in the Lord God almighty."

It came as Ukraine marked 100 days since Moscow's invasion on Friday, with Russian forces hammering the Donbas in their push to capture the country's east.

The sombre milestone came less than 24 hours after Kyiv announced Moscow was now in control of 20 per cent of Ukrainian territory, including Crimea and parts of the Donbas region seized in 2014.

After being repelled from around the capital, Putin's troops have set their sights on capturing eastern Ukraine, prompting dire warnings the war could continue to drag on.

"We just have to be prepared for the long haul," Stoltenberg said, while reiterating that Nato does not want direct confrontation with Russia.

While the advance has been much slower than Moscow expected, Russian forces have expanded control beyond the 43,000sq km.

"Today, about 20 per cent of our territory is under the control of the occupiers," Ukrainian President Volodymyr Zelenskyy said.

Since Russia's February 24 invasion, thousands have been killed and millions forced to flee, with Ukraine's east now bearing the brunt of Russia's assault, which Zelenskyy said was killing up to 100 Ukrainian soldiers every day.

On the ground, street battles were raging in the industrial hub of Severodonetsk in Luhansk, part of the Donbas.

The strategic city is a key target for Moscow, which already controls 80 per cent of the area, but Luhansk regional governor Sergiy Gaiday vowed Ukrainian forces would fight "until the end".

Severodonetsk's Azot factory, one of Europe's biggest chemical plants, was targeted by Russian soldiers, who fired on one of its administrative buildings and a warehouse where methanol was stored. 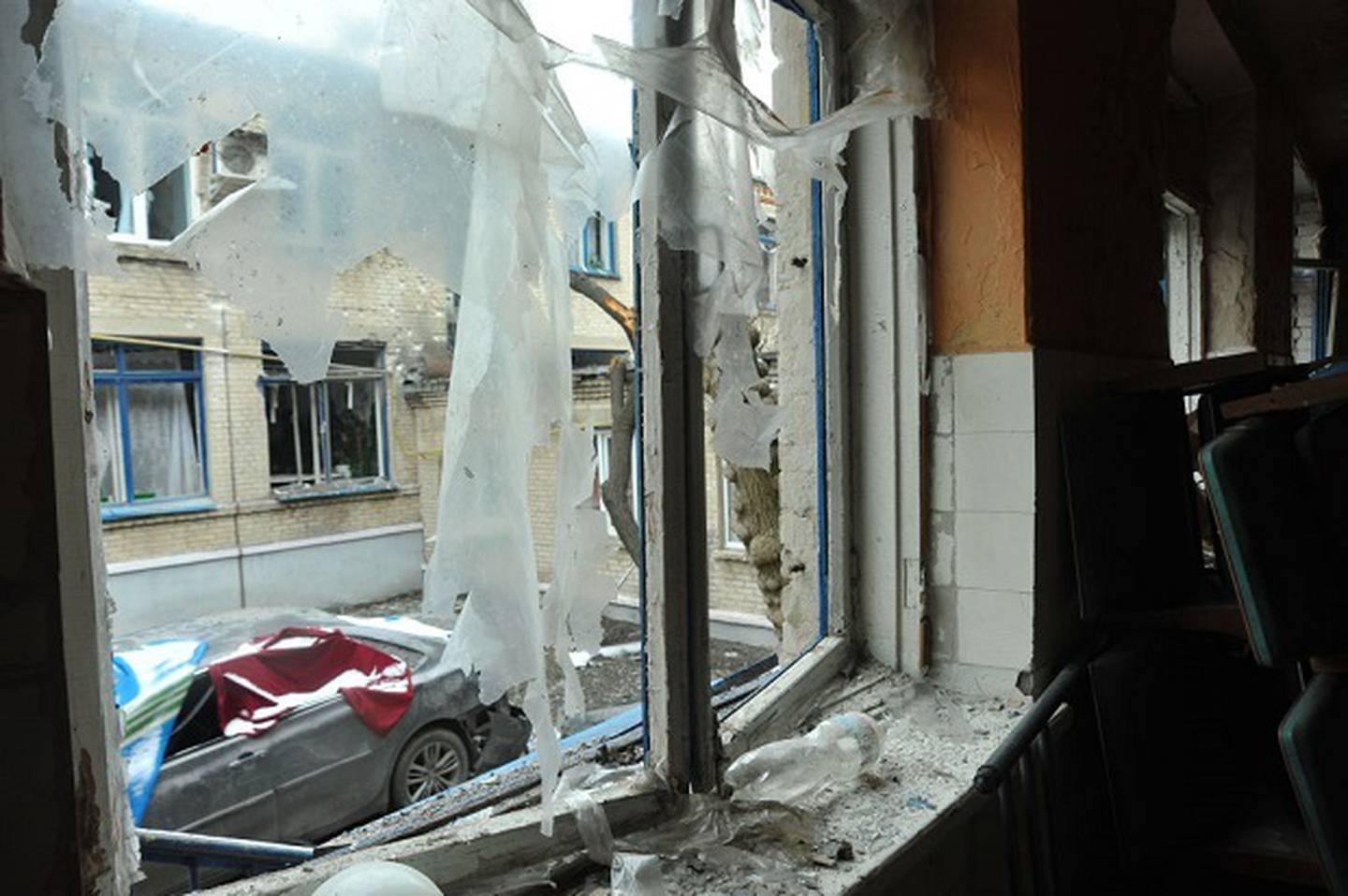 Damaged as a result of shelling by Russian troops in Sievierodonetsk, eastern Ukraine. Photo / Getty Images

Led by the US, Western nations have pumped arms and military supplies into Ukraine to help it survive the onslaught so far.

Bridget Brink, the new US ambassador to Kyiv, promised on Thursday the United States would "help Ukraine prevail against Russian aggression", after presenting her credentials to Zelenskyy.

Beyond sending arms to Ukraine, Western allies have also sought to choke off Russia's financial lifeline in a bid to get Putin to change course.

Ramping up an already long list of embargoes, the US black-listed Putin's money manager and a Monaco company that provides luxury yachts to Moscow's elite.

Across the Atlantic, EU nations agreed new sanctions that would halt 90 per cent of Russian oil imports to the bloc by the end of the year.