France's president denounced Russia's fiery airstrike on a crowded shopping mall in Ukraine as a "new war crime" on Tuesday (Wednesday NZ time) and vowed the West's support for Kyiv would not waver, saying Moscow "cannot and should not win" the war.

The strike, which killed at least 18 people in the central city of Kremenchuk, came as leaders from the Group of Seven nations met in Europe. It was part of an unusually intense barrage of Russian fire across Ukraine, including in the capital, Kyiv, that renewed international attention as the war drags on.

Speaking at the end of the G7 summit in Germany, French President Emmanuel Macron appeared to address that concern, vowing that the seven leading industrialised democracies would support Ukraine and maintain sanctions against Russia "as long as necessary, and with the necessary intensity."

"Russia cannot and should not win," he said. He called Monday's attack on the mall "a new war crime".

As they have in other attacks, Russian officials claimed the shopping centre was not the target.

In a virtual address to the UN Security Council, Ukrainian President Volodymyr Zelenskyy accused Russian President Vladimir Putin of being a "terrorist" and called for Russia to be expelled from the United Nations. He also urged the UN to establish an international tribunal to investigate Russia's action in Ukraine.

Zelenskyy ended his address by asking all in the chamber to stand in silent tribute to the "tens of thousands" of Ukrainian children and adults killed in the war. All council members rose, including Russia's deputy UN ambassador Dmitry Polyansky. 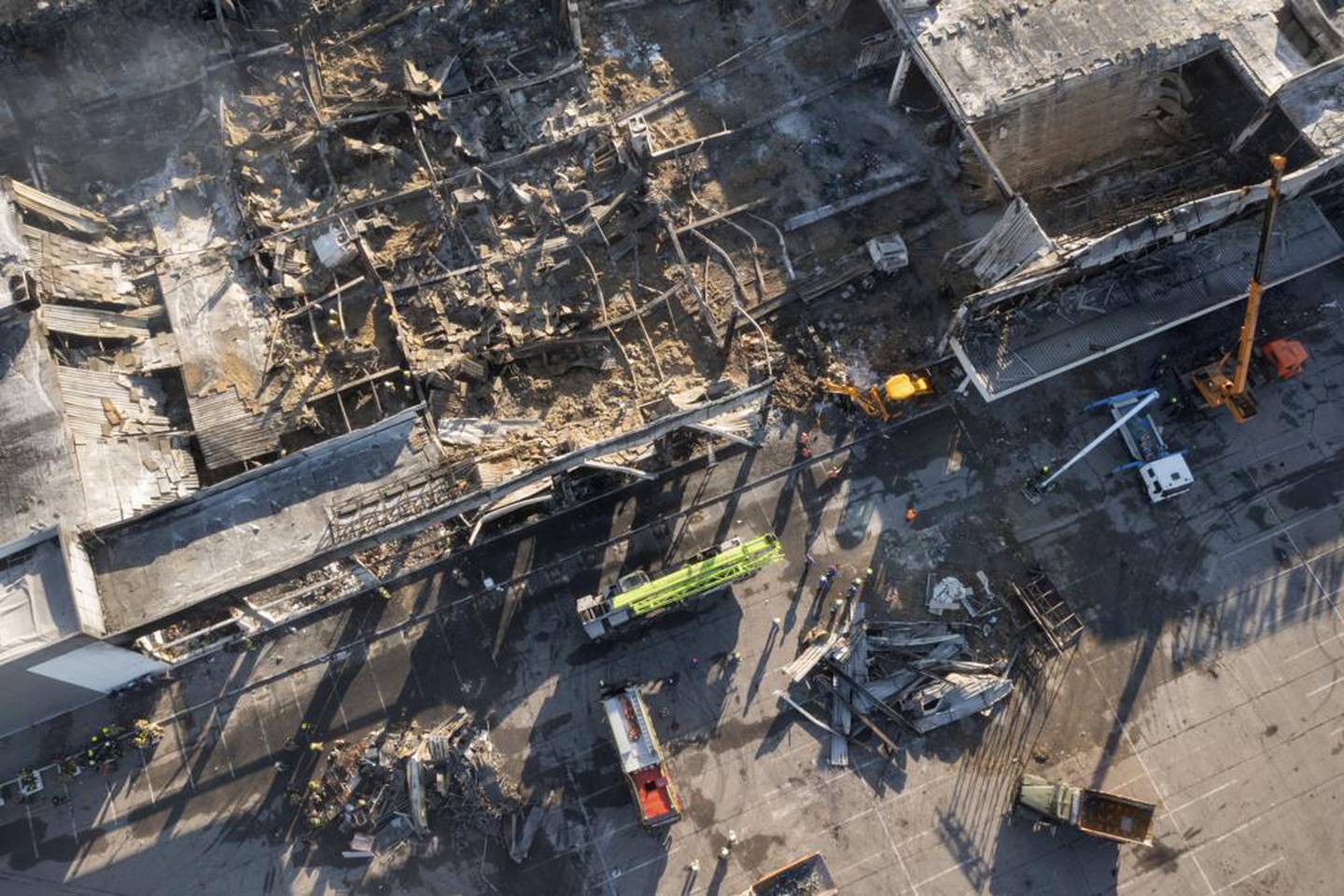 How to counter Russia and back Ukraine will also be the focus of a summit this week of the Nato alliance, whose support has been critical to Kyiv's ability to fend off Moscow's larger and better-equipped forces. Ukrainian leaders, however, say they need more and better weapons if they are to hold off and even drive back Russia, which is pressing an all-out assault in Ukraine's eastern Donbas region.

As Macron spoke, rescuers combed through the charred rubble of the shopping mall, which officials said was struck when more than 1000 afternoon shoppers and workers were inside.

Kateryna Romashyna, a local resident, told The Associated Press that she had just arrived at the mall when an explosion knocked her down. When another blast came about 10 minutes later, she realised she needed to get away.

"I ran away from the epicentre with all of my strength," she said. Fighting back tears, she added: "You have to be a real monster" to strike a shopping mall.

Many of those inside quickly fled the building when an air raid siren sounded and took shelter across the street, Ukrainian Interior Minister Denis Monastyrsky said. Several of the bodies of those who didn't make it out in time were burned beyond recognition, he said. In addition to the 18 killed, authorities said 59 were wounded, and 21 people were still missing.

The attack recalled strikes earlier in the war that hit a theatre, a train station, and a hospital. Zelenskyy called it "one of the most daring terrorist attacks in European history".

Rocket attacks continued elsewhere in Ukraine. Authorities in the city of Dnipro said workers at a diesel car repair shop were trapped in rubble after a strike from a cruise missile fired from the Black Sea, Ukrainian news agencies reported. The Ukrainian military managed to intercept and destroy other missiles fired at the city, the agencies said.

As condemnation came in from many quarters, Kremlin spokesman Dmitry Peskov struck a defiant note, saying Russia would press its offensive until it fulfilled its goals. He said the hostilities could stop "before the end of the day" if Ukraine were to surrender and meet Russia's demands, including recognising its control over the territory it has taken by force. 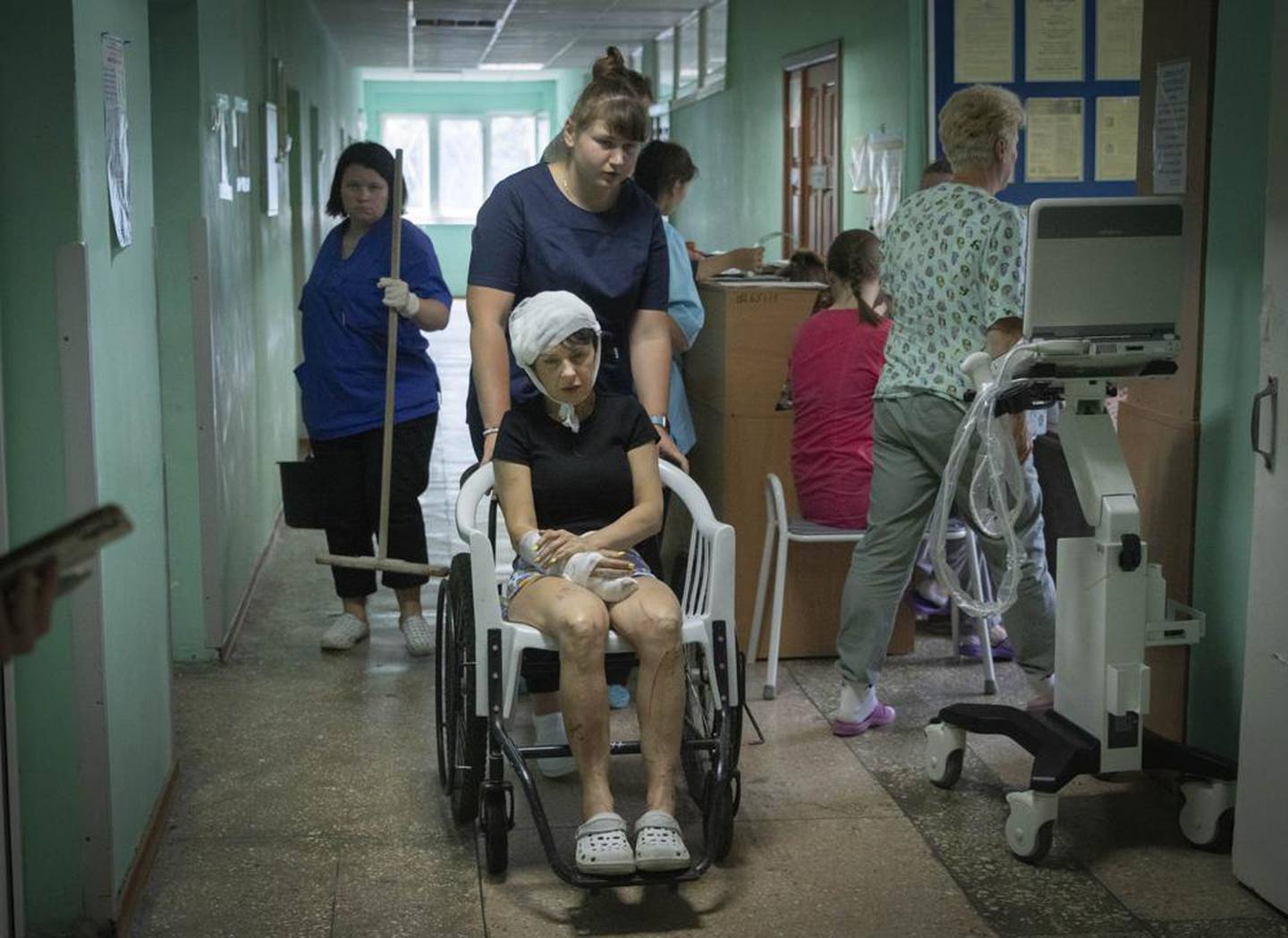 A hospital nurse pushes a wheelchair carrying a woman wounded by the Russian deadly rocket attack at a shopping centre. Photo / AP

Russian Defence Ministry spokesman Lt Gen Igor Konashenkov claimed warplanes fired precision-guided missiles at a depot that contained Western weapons and ammunition, which detonated and set the mall on fire. Ukrainian authorities said that in addition to the direct hit on the mall, a factory was struck, but denied it housed weapons.

Konashenkov also falsely alleged the mall was not in use.

One survivor, Oleksandr, a mall employee, told the AP from a hospital bed the shopping centre was packed with customers. He recalled stepping outside with a colleague for a cigarette when the air raid siren went off.

"There was a black tunnel, smoke, fire," he said. "I started to crawl. I saw the sun up there, and my brain was telling me I needed to save myself."

Ukraine's prosecutor general Iryna Venediktova said the missile attack was one of Russia's "crimes against humanity". She emphasised the need for all Ukrainians to remain alert and expect a similar strike "every minute".

On Tuesday, Russian forces struck the Black Sea city of Ochakiv, damaging apartment buildings and killing two, including a 6-year-old child. Six more people, four of them children, were wounded. One of them, a 3-month-old baby, is in a coma, according to officials.

The unusually intense spate of fire came as the G7 leaders pledged continued support for Ukraine and prepared new sanctions against Russia, including a price cap on oil and higher tariffs on goods.

Zelenskyy has called for more air defence systems from his Western allies to help his forces fight back. Nato's support for Ukraine will be a major focus of a summit starting this week in Madrid, and an early signal of unity came on Tuesday when Turkey agreed to lift its opposition to Sweden and Finland joining Nato. 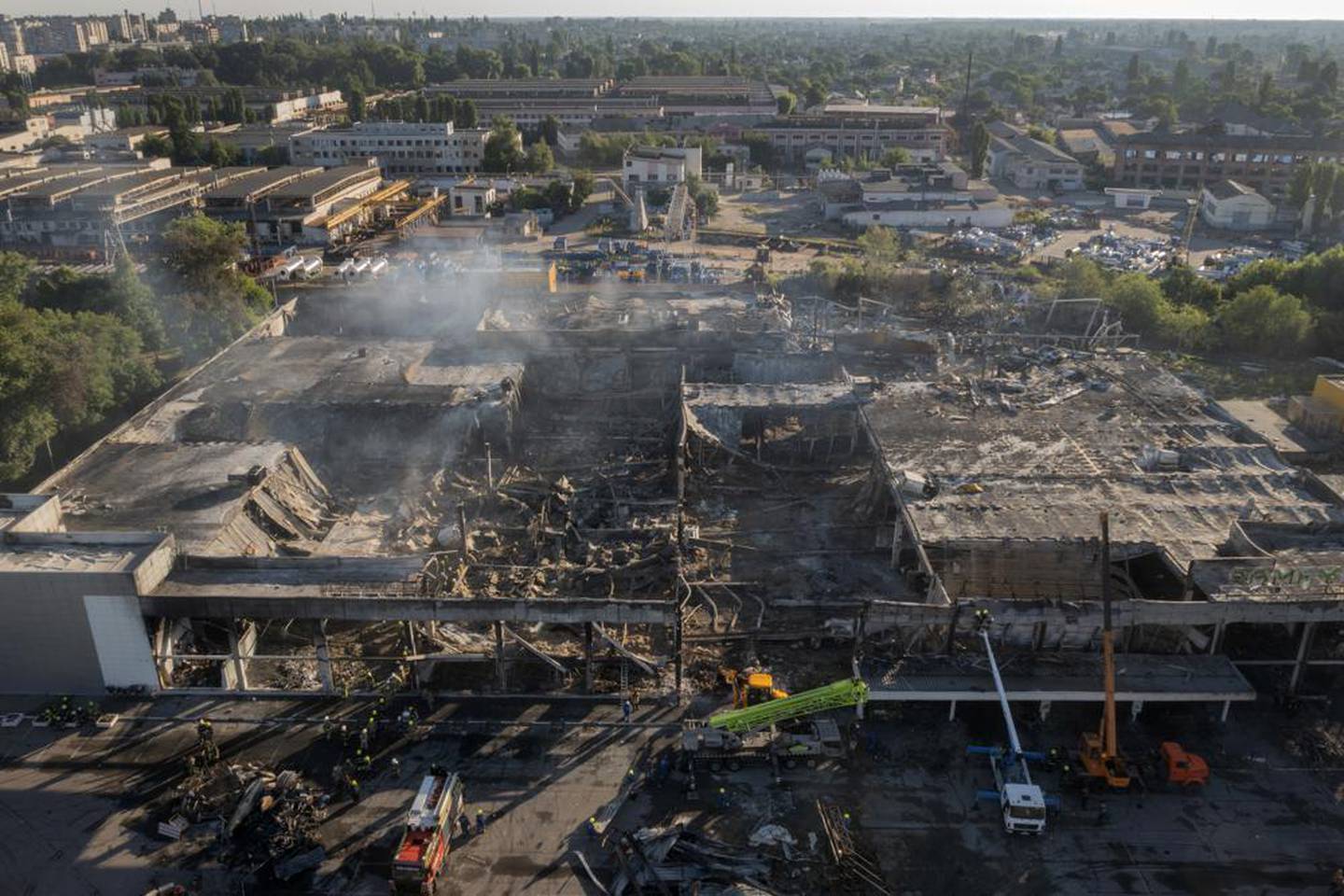 Russia's invasion of Ukraine prompted the two Nordic countries to abandon their long-held nonaligned status and apply to join Nato. But Turkish President Recep Tayyip Erdogan had blocked the move, insisting they change their stance on Kurdish rebel groups that Turkey considers terrorists.

Russian Foreign Minister Sergey Lavrov warned the West that "the more weapons are pumped into Ukraine, the longer the conflict will continue and the longer the agony of the Nazi regime backed by Western capitals will last".

Russia has falsely called the war a campaign to "de-Nazify" Ukraine — a country with a democratically elected Jewish president who wants closer ties with the West.

In a sinister message to Nato leaders, Russia's state space corporation Roscosmos published satellite images and the precise coordinates of the conference hall where their summit will be held.

It also posted images and the coordinates of the White House, the Pentagon and the government headquarters in London, Paris and Berlin — referring to them as "decision-making centres supporting the Ukrainian nationalists" in a message on the Telegram app. That wording echoes Putin's warnings he could target such centres in response to what he has called Western aggression.

In other developments, the two fighting countries continued a sporadic series of prisoner exchanges. Ukraine exchanged 15 Russian prisoners of war for 16 Ukrainian soldiers and one civilian, the Ukrainian Pravda news outlet reported on Tuesday.

Ukrainian Pravda also reported that in the Russian-occupied city of Kherson, the mayor was detained Tuesday and occupying authorities seized his computer hard drive and documents after he had refused to cooperate with Russian-appointed local officials. Russia's Tass news agency confirmed the detention.

Meanwhile, Bulgaria said on Tuesday it was expelling 70 Russian diplomats designated "a threat to national security," ordering them to leave within five days. A Bulgarian foreign ministry statement said this would reduce Russia's Sofia embassy staff "to up to 23 diplomatic and 25 administrative and technical staff."