The first civilians evacuated from the bombed-out steel plant that has become the last stronghold of Ukrainian fighters in Mariupol have slowly made their way toward safety, as others who managed to escape the city described terrifying weeks of bombardment and deprivation.

More than 100 civilians — including elderly women and mothers with small children — left the sprawling, rubble-strewn Azovstal steel mill and set out in buses and ambulances for the Ukrainian-controlled city of Zaporizhzhia, about 230km to the northwest, according to authorities and video released by the two sides.

Mariupol Deputy Mayor Sergei Orlov told the BBC that the evacuees were making slow progress. Authorities gave no explanation for the delay.

At least some of the evacuees were apparently taken to a village controlled by Russia-backed separatists. The Russian military said that some chose to stay in separatist areas, while dozens left for Ukrainian-held territory. 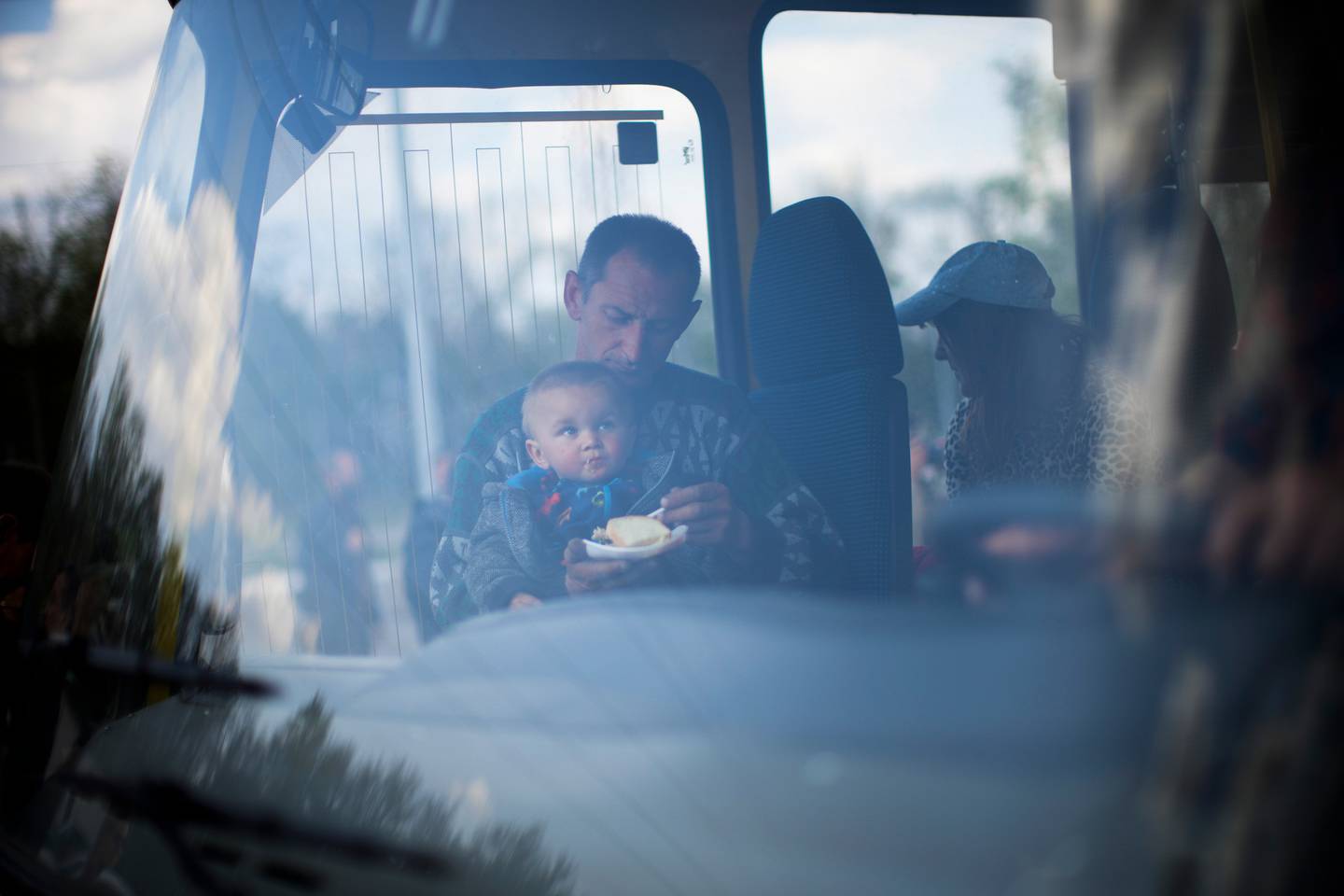 A man feeds a child as they arrive by bus at a reception centre for displaced people in Zaporizhzhia, Ukraine. Photo / Francisco Seco, AP

In the past, Ukraine has accused Moscow's troops of taking civilians against their will to Russia or Russian-controlled areas. The Kremlin has denied it.

The steel-plant evacuation, if successful, would represent rare progress in easing the human cost of the almost 10-week war, which has caused particular suffering in Mariupol. Previous attempts to open safe corridors out of the southern port city and other places have broken down, with Ukrainian officials accusing Russian forces of shooting and shelling along agreed-on evacuation routes.

Before the weekend evacuation, overseen by the United Nations and the Red Cross during a brief cease-fire around the steelworks, about 1000 civilians were believed to be in the plant, along with an estimated 2000 Ukrainian defenders. Russia has demanded that the fighters surrender; they have refused.

As many as 100,000 people overall may still be in Mariupol, which had a prewar population of more than 400,000. Russian forces have pounded much of the city to

Some Mariupol residents got out of the city on their own, by way of often damaged private cars.

As sunset approached, Mariupol resident Yaroslav Dmytryshyn rattled up to a reception centre in Zaporizhzhia in a car with a back seat full of youngsters and two signs taped to the back window: "Children" and "Little ones".

"I can't believe we survived," he said, looking worn but in good spirits over their safe arrival after two days on the road.

"There is no Mariupol whatsoever," he said. "Someone needs to rebuild it, and it will take millions of tons of gold." He said they lived just across the railroad tracks from the steel plant. "Ruined," he said. "The factory is gone completely." 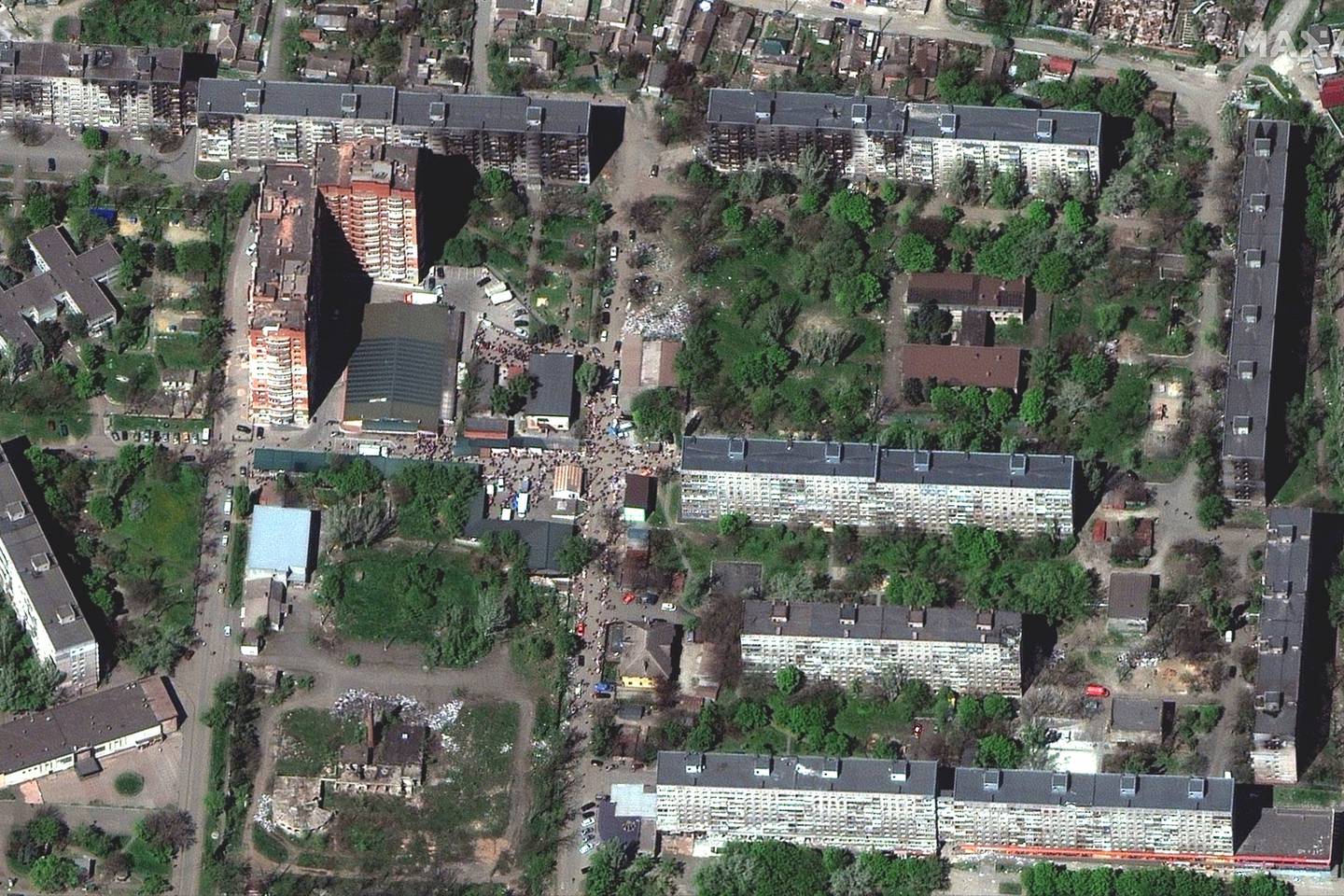 Anastasiia Dembytska, who took advantage of the cease-fire to leave with her daughter, nephew and dog, said her family survived by cooking on a makeshift stove and drinking well water. She said she could see the steelworks from her window, when she dared to look out.

"We could see the rockets flying" and clouds of smoke over the plant, she said.

In other developments, European Union energy ministers met Monday to discuss new sanctions against the Kremlin, which could include restrictions on Russian oil. But some Russia-dependent members of the 27-nation bloc, including Hungary and Slovakia, are wary of taking tough action.

Ukrainian President Volodymyr Zelenskyy said he hoped more people would be able to leave Mariupol in an organised evacuation. The city council told residents wanting to leave to gather at a shopping mall to wait for buses. 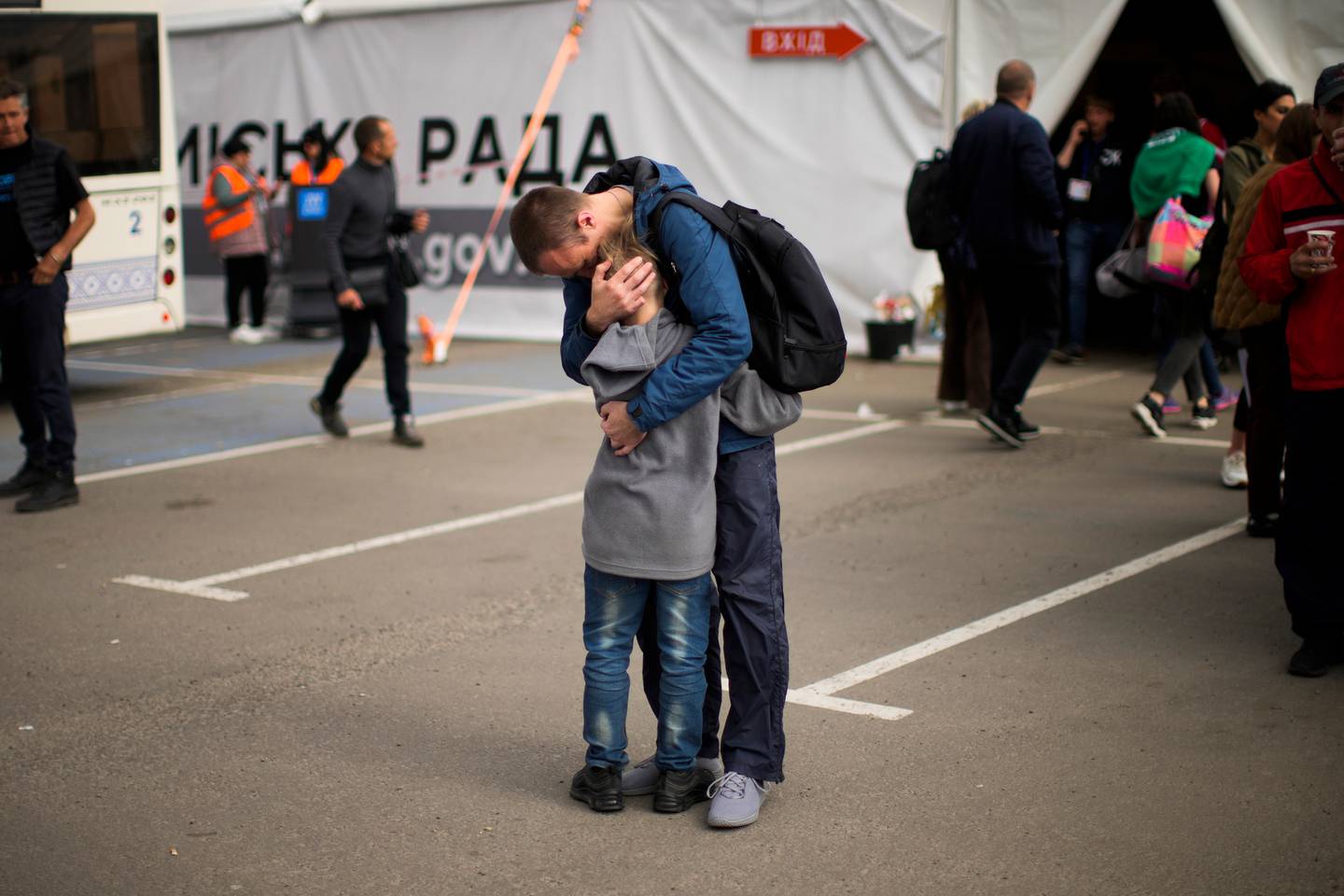 Andrii Fedorov hugs his son Makar as they are reunited at a reception centre in Zaporizhzhia. Photo / Francisco Seco, AP

Zelenskyy told Greek state television that remaining civilians in the steel plant were afraid to board buses because they feared they would be taken to Russia. He said he had been assured by the UN that they would be allowed to go to areas his government controls.

In the wake of the evacuation from the plant, Russian forces resumed shelling there, according to one of the defenders.

"Several dozen small children are still in the bunkers underneath the plant," Shlega said.

Thwarted in his bid to seize Kyiv, the capital, President Vladimir Putin has shifted his focus to the Donbas, Ukraine's eastern industrial heartland, where Moscow-backed separatists have been battling Ukrainian forces since 2014.

Russia said it struck dozens of military targets in the region in the past day alone. It said it hit concentrations of troops and weapons and an ammunition depot near Chervone in the Zaporizhzhia region, which lies west of the Donbas. 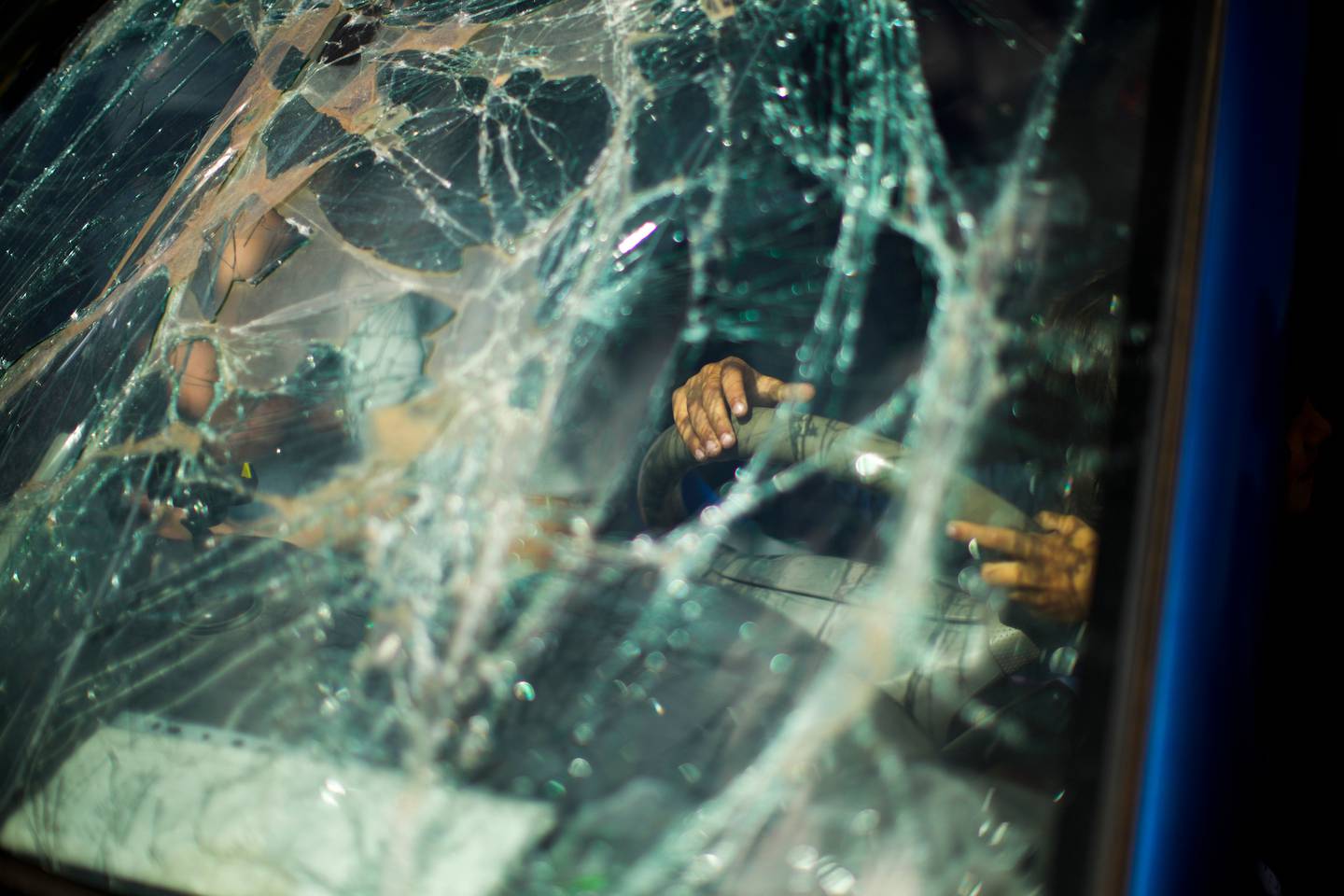 A child plays with the steering wheel of a damaged car as his family waits to be processed on arrival from Mariupol in Zaporizhzhia. Photo / Francisco Seco, AP

Zelenskyy's office said at least three people were killed in the Donbas in the previous 24 hours. The regional administration in Zaporizhzhia reported that at least two people died in Russian shelling.

The governor of the Odesa region along the Black Sea Coast, Maksym Marchenko, said on the Telegram messaging app that a Russian missile strike on an Odesa infrastructure target caused deaths and injuries. He gave no details.

Mariupol, which lies in the Donbas, is key to Russia's campaign in the east. Its capture would deprive Ukraine of a vital port, allow Russia to establish a land corridor to the Crimean Peninsula, which it seized from Ukraine in 2014, and free up troops for fighting elsewhere in the region.

A full picture of the battle unfolding in eastern Ukraine is hard to capture. The fighting makes it dangerous for reporters to move around, and both sides have imposed tight restrictions on reporting from the combat zone. 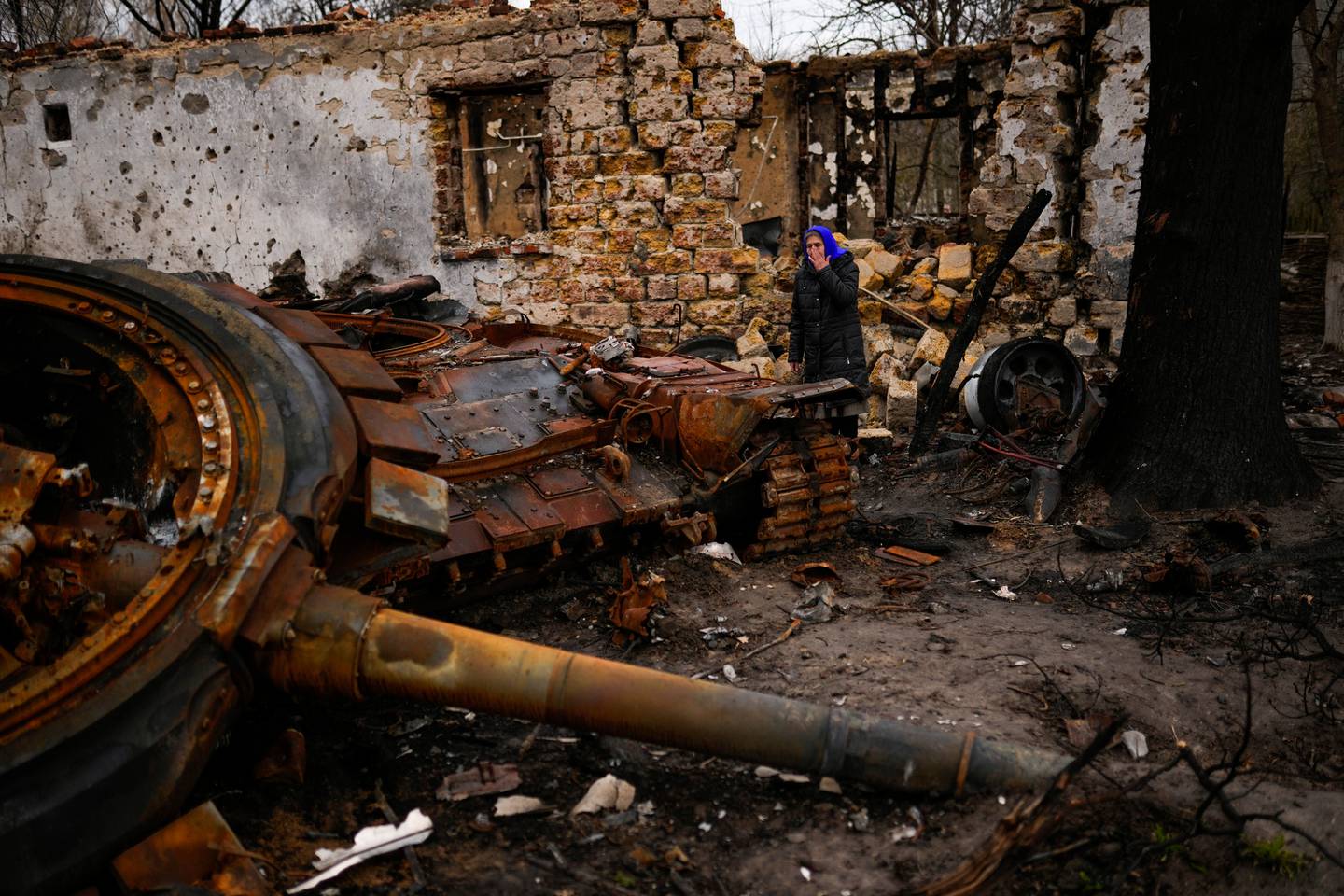 Valentyna Sherba, 68, stands next to a Russian tank in the backyard of her father's home, both destroyed on the outskirts of Chernihiv. Photo / Francisco Seco, AP

But Britain's Defence Ministry said it believes more than a quarter of all the fighting units Russia has deployed in Ukraine are now "combat ineffective" — unable to fight because of loss of troops or equipment.

Ukraine said Russia also struck a strategic road and rail bridge west of Odesa. The bridge was heavily damaged in previous Russian strikes, and its destruction would cut a supply route for weapons and other cargo from neighbouring Romania.