Russia pounded targets from practically one end of Ukraine to the other Thursday, including Kyiv, bombarding the city while the head of the United Nations was visiting in the boldest attack on the capital since Moscow's forces retreated weeks ago.

At least one person was killed and several were injured in the attack on Kyiv, including some who were trapped in the rubble when two buildings were hit, rescue officials said.

The bombardment came barely an hour after Ukrainian President Volodymyr Zelenskyy held a news conference with UN Secretary-General António Guterres, who said Ukraine has become "an epicentre of unbearable heartache and pain". A spokesperson said Guterres and his team were safe.

Meanwhile, explosions were reported across the country, in Polonne in the west, Chernihiv near the border with Belarus, and Fastiv, a large railway hub southwest of the capital. The mayor of Odesa in southern Ukraine said rockets were intercepted by air defences.

Ukrainian authorities also reported intense Russian fire in the Donbas — the eastern industrial heartland that the Kremlin says is its main objective — and near Kharkiv, a northeastern city outside the Donbas that is seen as key to the offensive.

In the ruined southern port city of Mariupol, Ukrainian fighters holed up in the steel plant that represents the last pocket of resistance said concentrated bombing overnight killed and wounded more people. And authorities warned that a lack of safe drinking water inside the city could lead to outbreaks of deadly diseases such as cholera and dysentery.

In Zaporizhzhia, a crucial way station for tens of thousands of Ukrainians fleeing Mariupol, an 11-year-old boy was among at least three people wounded in a rocket attack that authorities said was the first to hit a residential area in the southern city since the war began. Shards of glass cut the boy's leg to the bone. 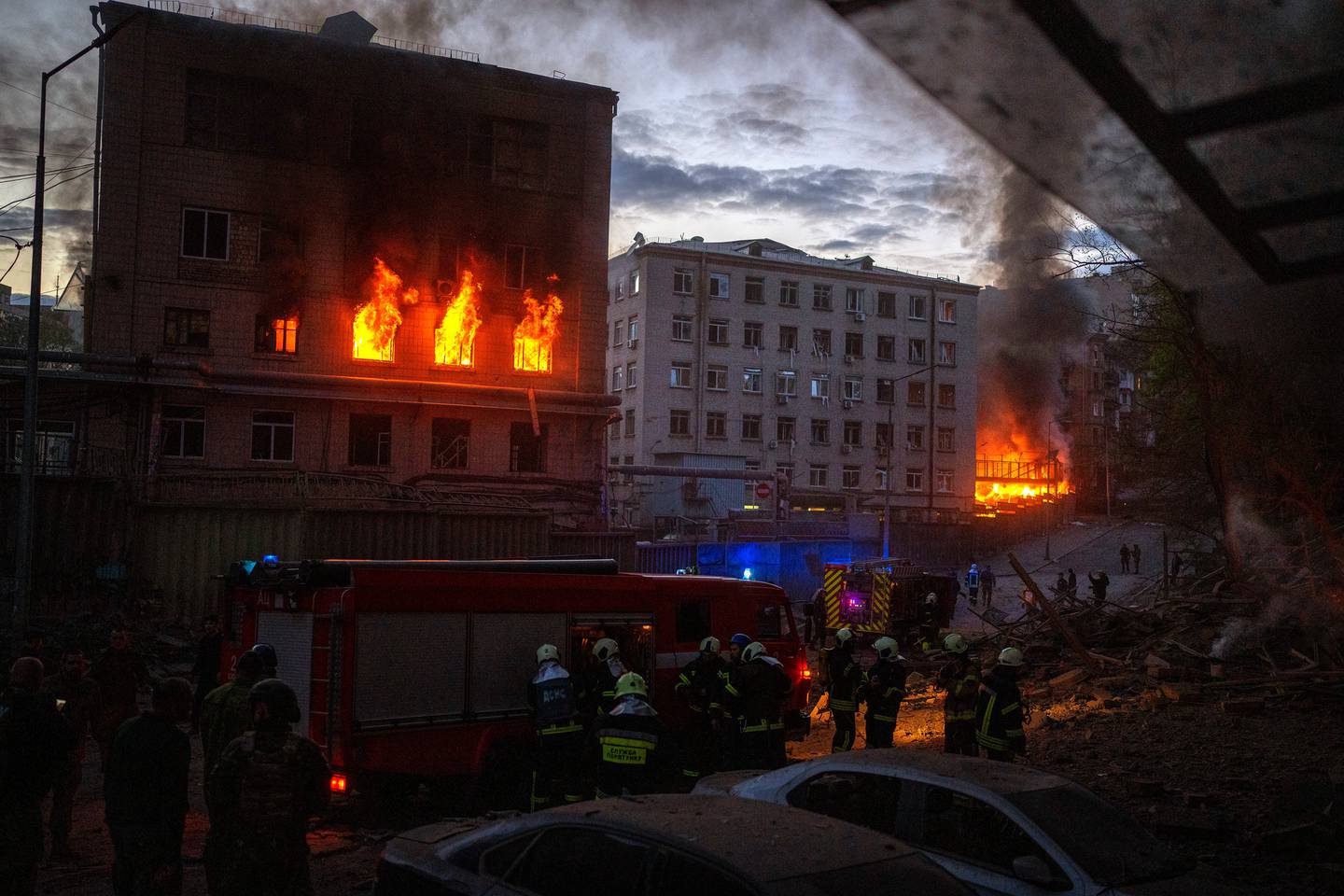 Emergency services are working in the area following an explosion in Kyiv, Ukraine. Photo / AP

Vadym Vodostoyev, the boy's father, said: "It just takes one second and you're left with nothing."

The fresh attacks came as Guterres surveyed the destruction in small towns outside the capital that saw some of the worst horrors of the first onslaught of the war. He condemned the atrocities committed in towns like Bucha, where evidence of mass killings of civilians was found after Russia withdrew in early April in the face of unexpectedly stiff resistance.

"Wherever there is a war, the highest price is paid by civilians," the UN chief lamented.

Separately, Ukraine's prosecutor accused 10 Russian soldiers of being "involved in the torture of peaceful people" in Bucha. Prosecutor General Iryna Venediktova did not say her office had filed criminal charges, and she appealed to the public for help in gathering evidence. Russia denies it targets civilians. 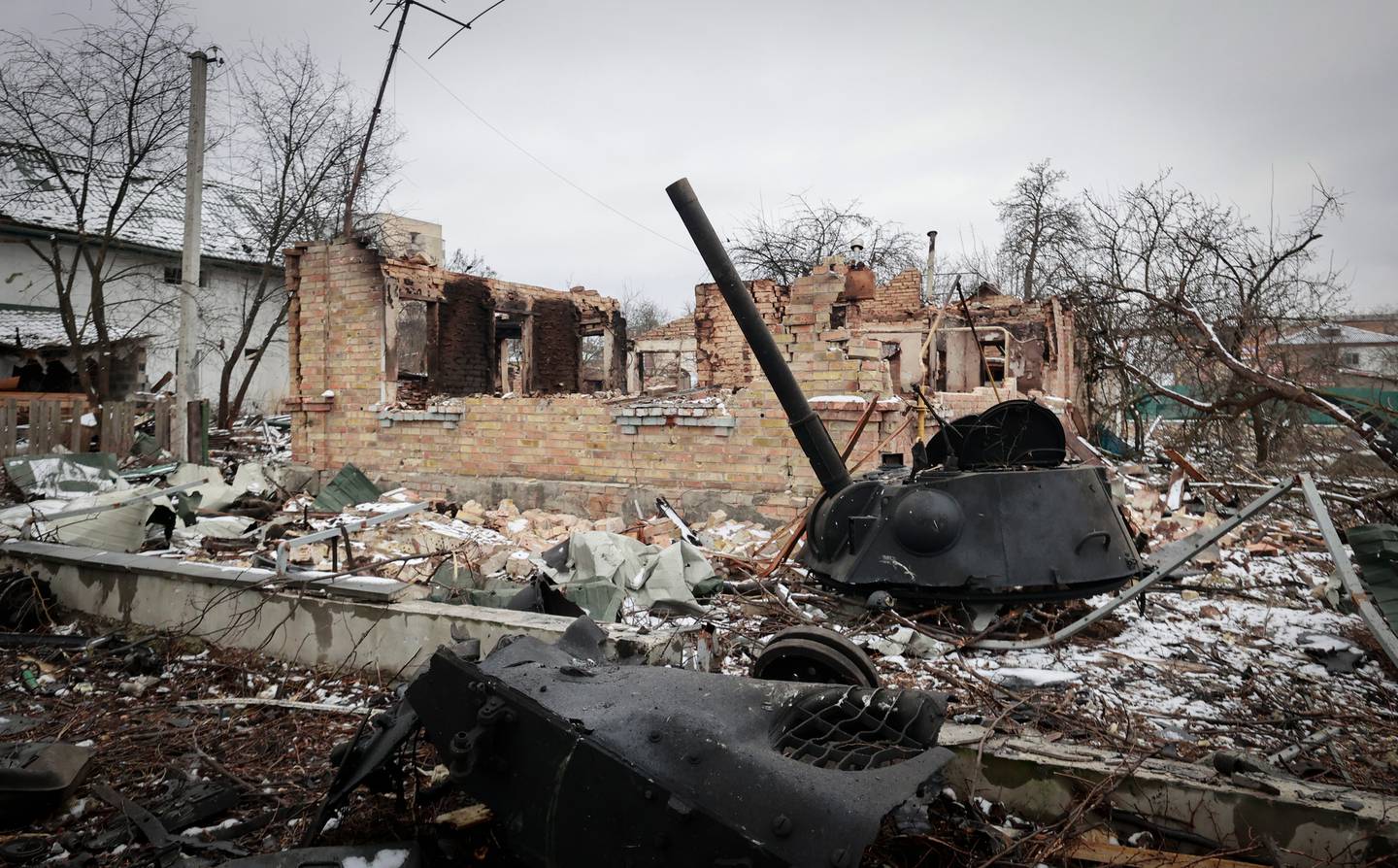 Destroyed buildings seen in the town of Bucha, close to the capital Kyiv, Ukraine. Photo / AP

In the attack on Kyiv, explosions shook the city and flames poured out of windows in at least two buildings — including one residential one — in the capital, which has been relatively unscathed in recent weeks. Plumes of smoke could be seen over the city.

The explosions in northwest Kyiv's Shevchenkivsky district came as residents have been increasingly returning to the city. Cafes and other businesses have reopened, and growing numbers of people have been out and about, enjoying the spring weather.

It was not immediately clear how far away the attack was from Guterres.

Getting a full picture of the unfolding battle in the east has been difficult because airstrikes and artillery barrages have made it extremely dangerous for reporters to move around. Several journalists have been killed in the war, now in its third month.

Also, both Ukraine and the Moscow-backed rebels fighting in the east have introduced tight restrictions on reporting from the combat zone.

Western officials say the Kremlin's apparent goal is to take the Donbas by encircling and crushing Ukrainian forces from the north, south and east. 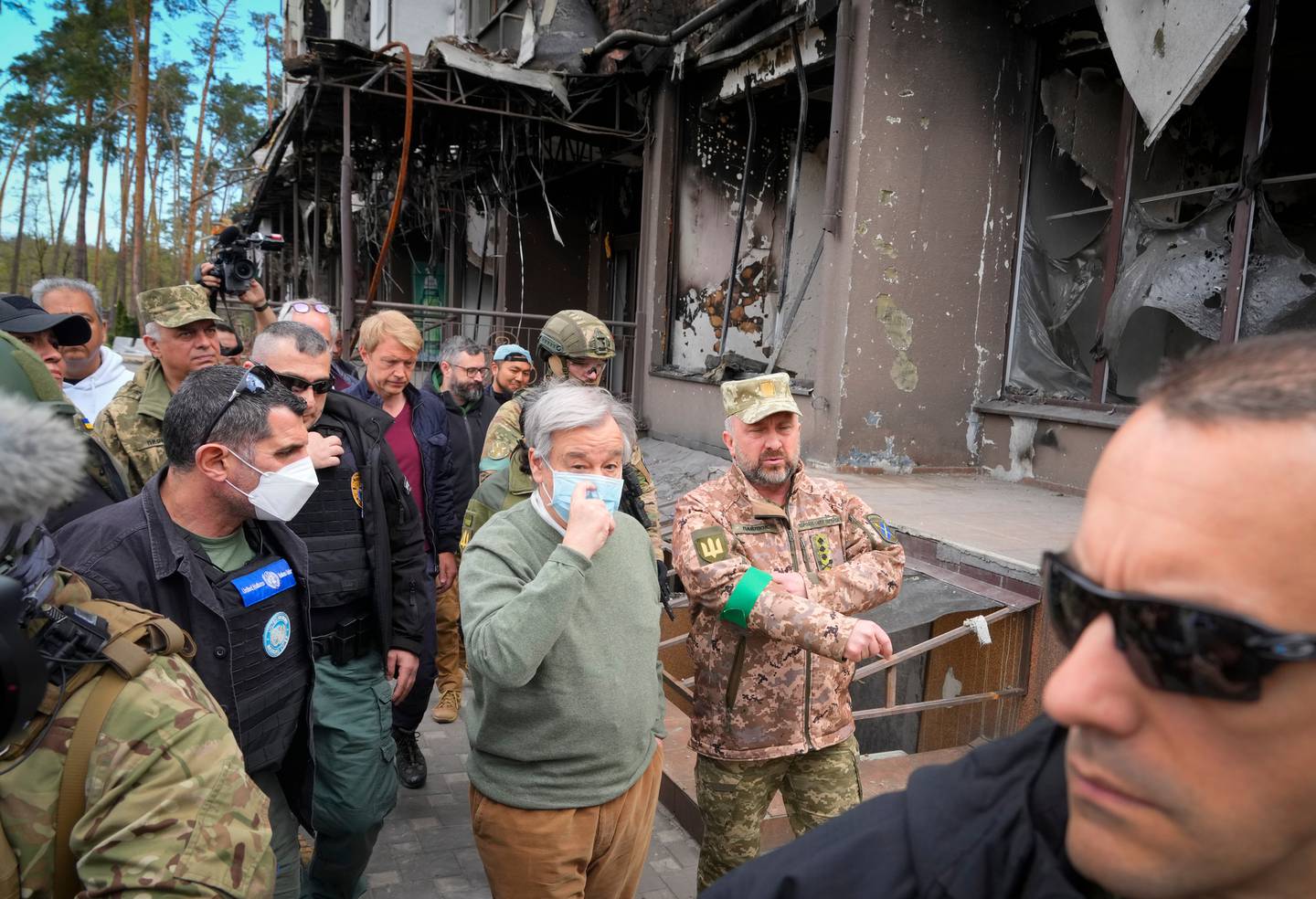 U.N. Secretary-General Antonio Guterres, checks houses that were destroyed by Russian shelling in Irpin, on the outskirts of Kyiv, Ukraine. Photo / AP

But so far, Russia's troops and their allied separatist forces appear to have made only minor gains, taking several small towns as they try to advance in relatively small groups against staunch Ukrainian resistance.

Russian military units were mauled in the abortive bid to storm Kyiv and had to regroup and refit. Some analysts say the delay in launching a full-fledged offensive may reflect a decision by Russian President Vladimir Putin to wait until his forces are ready for a decisive battle, instead of rushing in and risking another failure that could shake his rule amid worsening economic conditions at home because of Western sanctions.

Many observers suspect Putin wants to be able to claim a big victory in the east by Victory Day, on May 9, one of the proudest holidays on the Russian calendar, marking the defeat of Nazi Germany during World War II.

As Russia presses its offensive, civilians again bear the brunt.

"It's not just scary. It's when your stomach contracts from pain," said Kharkiv resident Tatiana Pirogova. "When they shoot during the day, it's still OK, but when the evening comes, I can't describe how scary it is."

Ukraine's military said that Russian troops were subjecting several places in the Donbas to "intense fire" and that over the past 24 hours, Ukrainian forces had repelled six attacks in the region.

Four civilians were killed in heavy shelling of residential areas in the Luhansk region of the Donbas, according to the regional governor. 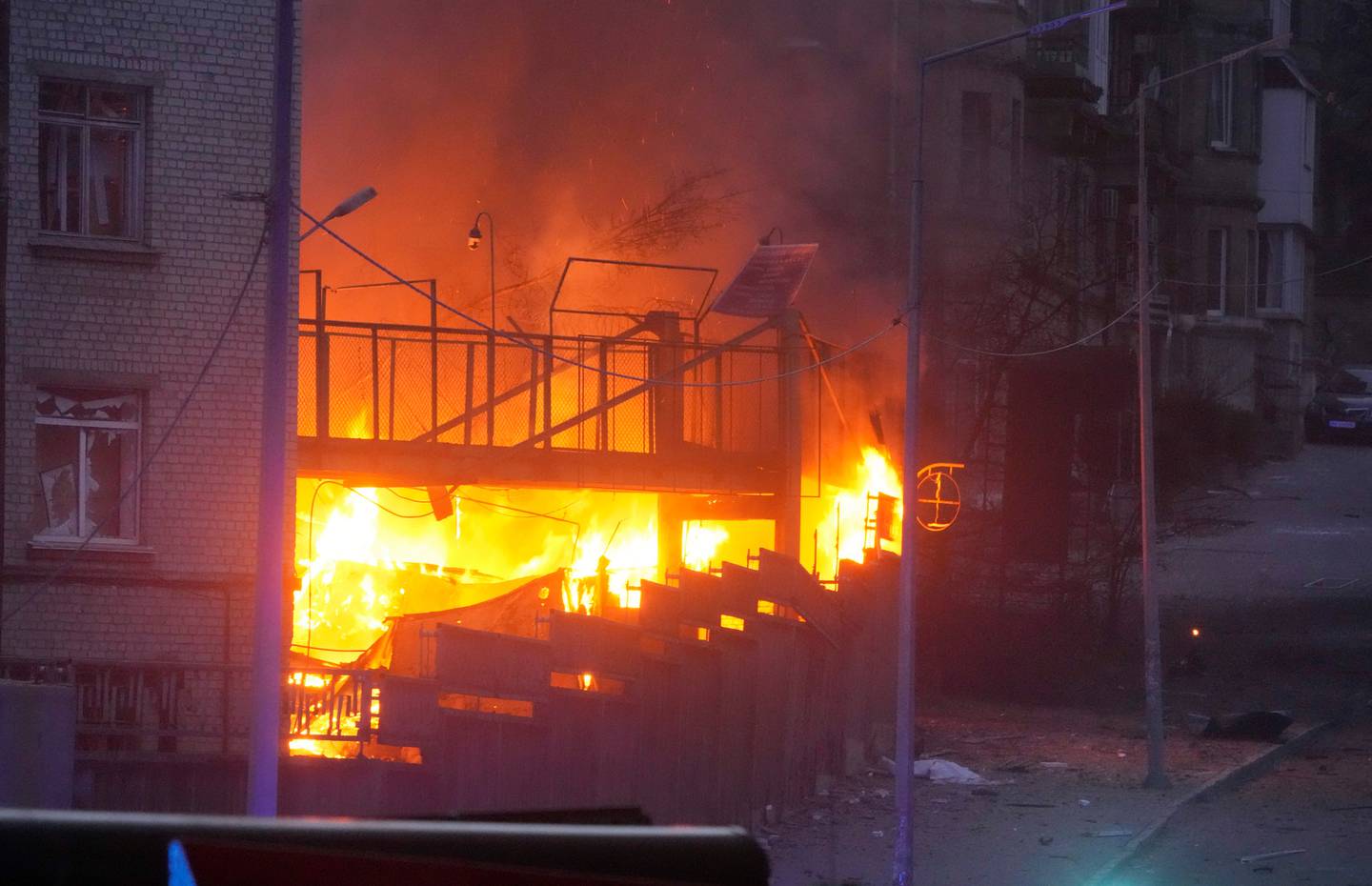 A fire after a Russian rocket attack is seen in Kyiv, Ukraine. Photo / AP

Columns of smoke could be seen rising at different points across the Donetsk region of the Donbas, and artillery and sirens were heard on and off.

In Mariupol, video posted online by Ukraine's Azov Regiment inside the steel plant showed people combing through the rubble to remove the dead and help the wounded. The regiment said the Russians hit an improvised underground hospital and its surgery room, killing an unspecified number of people. The video couldn't be independently verified.

"Deadly epidemics may break out in the city due to the lack of centralised water supply and sewers," the city council said on the messaging app Telegram. It reported bodies decaying under the rubble and a "catastrophic" shortage of drinking water and food.

Loud bangs were also reported in Russia's Belgorod region bordering Ukraine, but there was no immediate explanation. In recent days, fuel and ammunition sites on Russian soil have been hit with explosions and fires, and suspicion has fallen on Ukraine.

Ukraine has urged its allies to send even more military equipment to fend off the Russians. US President Joe Biden asked Congress for an additional $33 billion to help Ukraine.