A missile hit a train station where thousands of people had flocked to flee in eastern Ukraine, killing 50 people, Ukrainian authorities said, while warning they expect to find more evidence of war crimes in areas abandoned by Russian troops.

Photos from the scene showed bodies covered with tarps on the ground and the remnants of a rocket with the words "For the children" painted on it in Russian. About 4000 civilians were in and around the station, the office of Ukraine's prosecutor-general said, adding that most were women and children heeding calls to leave the area before Russia launches a full-scale offensive in the country's east.

The Russian Defense Ministry denied attacking the station in Kramatorsk, a city in Ukraine's contested Donbas region, but President Volodymyr Zelenskyy and other Ukrainian leaders accused Russia's military of deliberately targeting a location where only civilians were assembled. 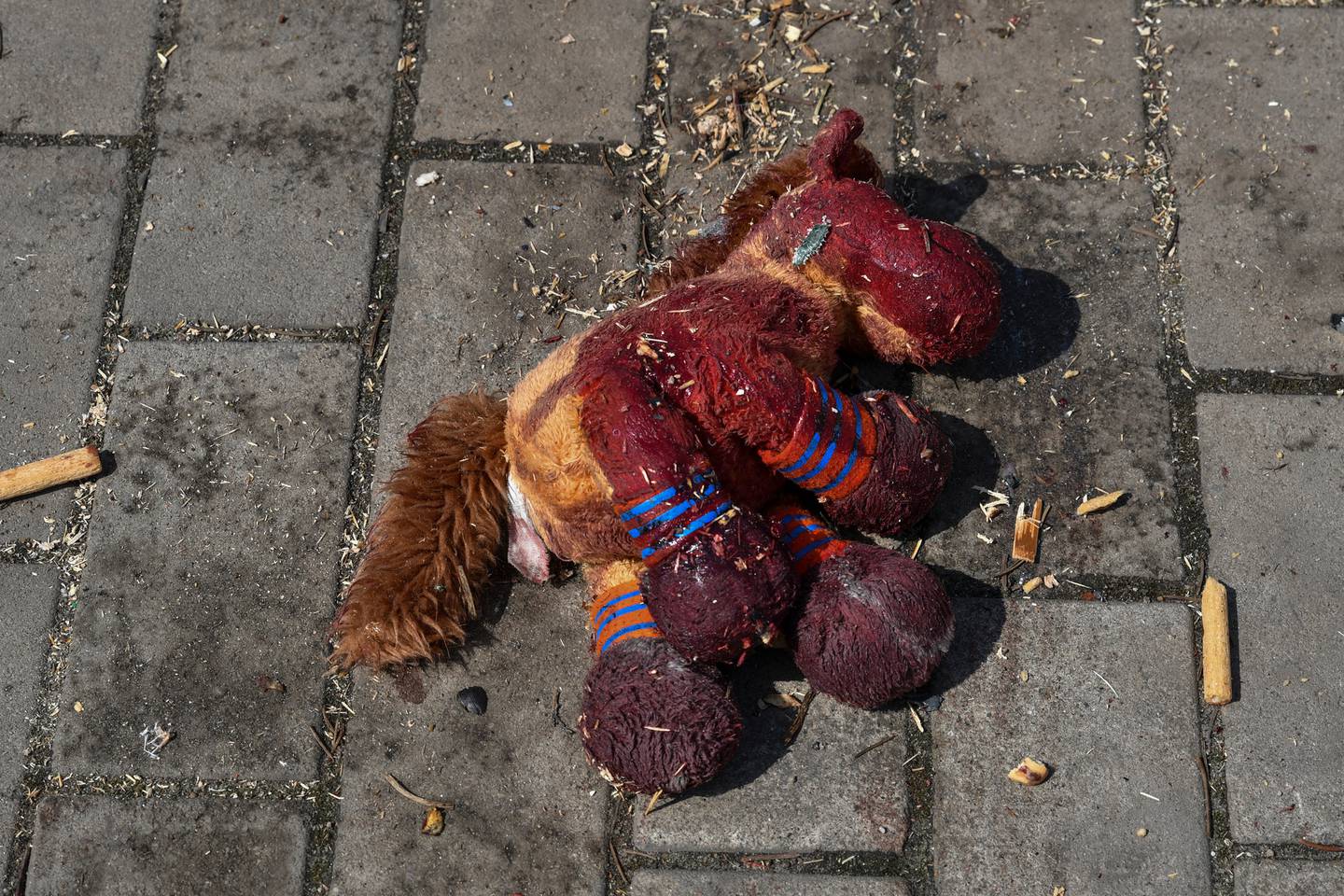 A stuffed horse with bloodstains on it lies on a platform after Russian shelling at the railway station in Kramatorsk. Photo / AP

"The inhuman Russians are not changing their methods. Without the strength or courage to stand up to us on the battlefield, they are cynically destroying the civilian population," the president said on social media. "This is an evil without limits. And if it is not punished, then it will never stop."

The regional governor of Donetsk, Pavlo Kyrylenko, later said that 39 people were killed and 87 wounded.

"The people just wanted to get away for evacuation," Prosecutor General Iryna Venediktova said while visiting Bucha, a town north of Kyiv, Ukraine's capital, where journalists and returning Ukrainians discovered scores of bodies on streets and in mass graves after Russian troops withdrew.

Venediktova spoke as workers pulled corpses from a mass grave near a church under spitting rain. Black body bags were laid out in rows in the mud. None of the dead were Russians; she said. Most of them had been shot. The prosecutor general's office is investigating the deaths as possible war crimes.

After failing to take Ukraine's capital and withdrawing from northern Ukraine, Russia has shifted its focus to the Donbas, a mostly Russian-speaking, industrial region in eastern Ukraine where Moscow-backed rebels have been fighting Ukrainian forces for eight years and control some areas. The train station is located in government-controlled territory.

Ukrainian officials warned residents this week to leave as soon as possible for safer parts of the country and said they and Russia had agreed to establish multiple evacuation routes in the east. 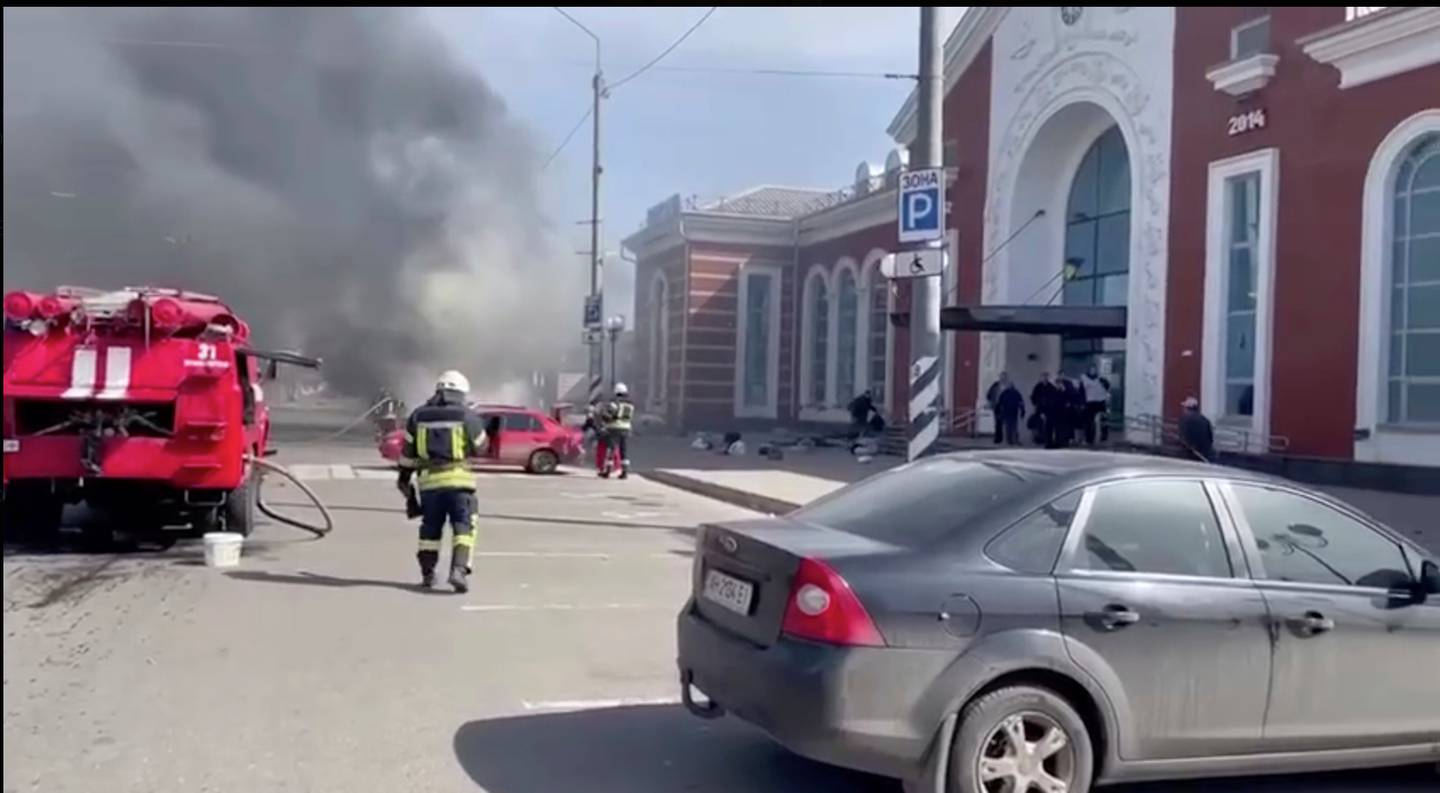 In this image from video published on Zelenskyy's Telegram channel, a smoke rises after Russian shelling at the railway station in Kramatorsk, Ukraine, on April 8. Photo / AP 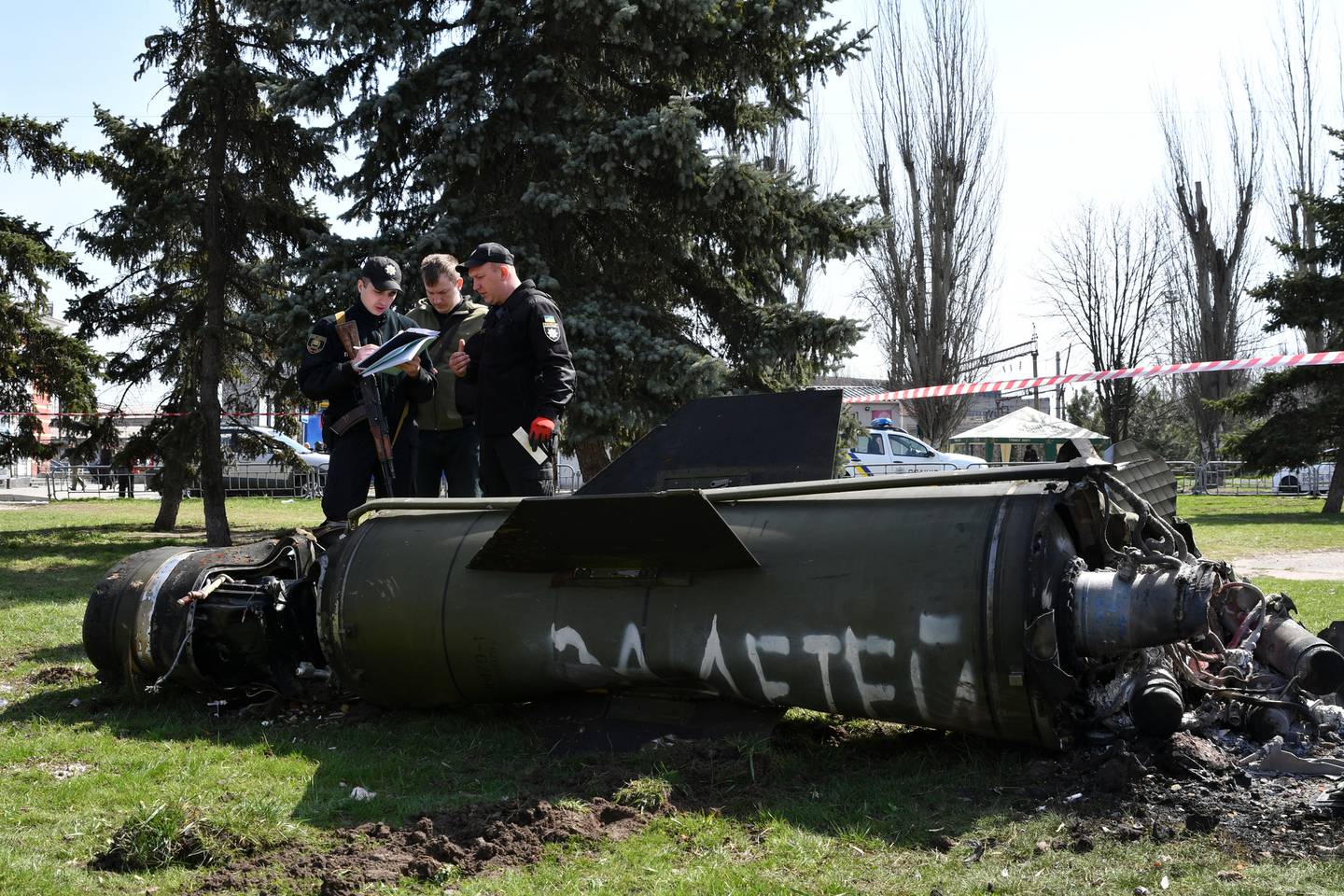 Ukrainian servicemen stand next to a fragment of a Tochka-U missile with a writing in Russian For children, after Russian shelling at the railway station in Kramatorsk, Ukraine. Photo / AP

In his nightly video address, Zelenskyy predicted more gruesome discoveries would be made in northern cities and towns as the Russians depart. He said horrors worse than the ones in Bucha already had surfaced in Borodianka, another settlement outside the capital.

"And what will happen when the world learns the whole truth about what the Russian troops did in Mariupol?" Zelenskyy said late Thursday, referring to the besieged southern port that has seen some of the greatest suffering since Russia invaded Ukraine.

"There, on every street, is what the world saw in Bucha and other towns in the Kyiv region after the departure of the Russian troops. The same cruelty. The same terrible crimes."

Spurred by reports that Russian forces committed atrocities in areas surrounding the capital, Nato nations agreed to increase their supply of arms after Ukraine's foreign minister pleaded for weapons from the alliance and other sympathetic countries to help face down an expected offensive in the east. Bucha Mayor Anatoliy Fedoruk said investigators found at least three sites of mass shootings of civilians during the Russian occupation. Most victims died from gunshots, not from shelling, he said, and some corpses with their hands tied were "dumped like firewood" into mass graves, including one at a children's camp.

Fedoruk said 320 civilians were confirmed dead as of Wednesday, but he expected more as bodies are found in the city that was home to 50,000 people. Only 3700 remain, he said. 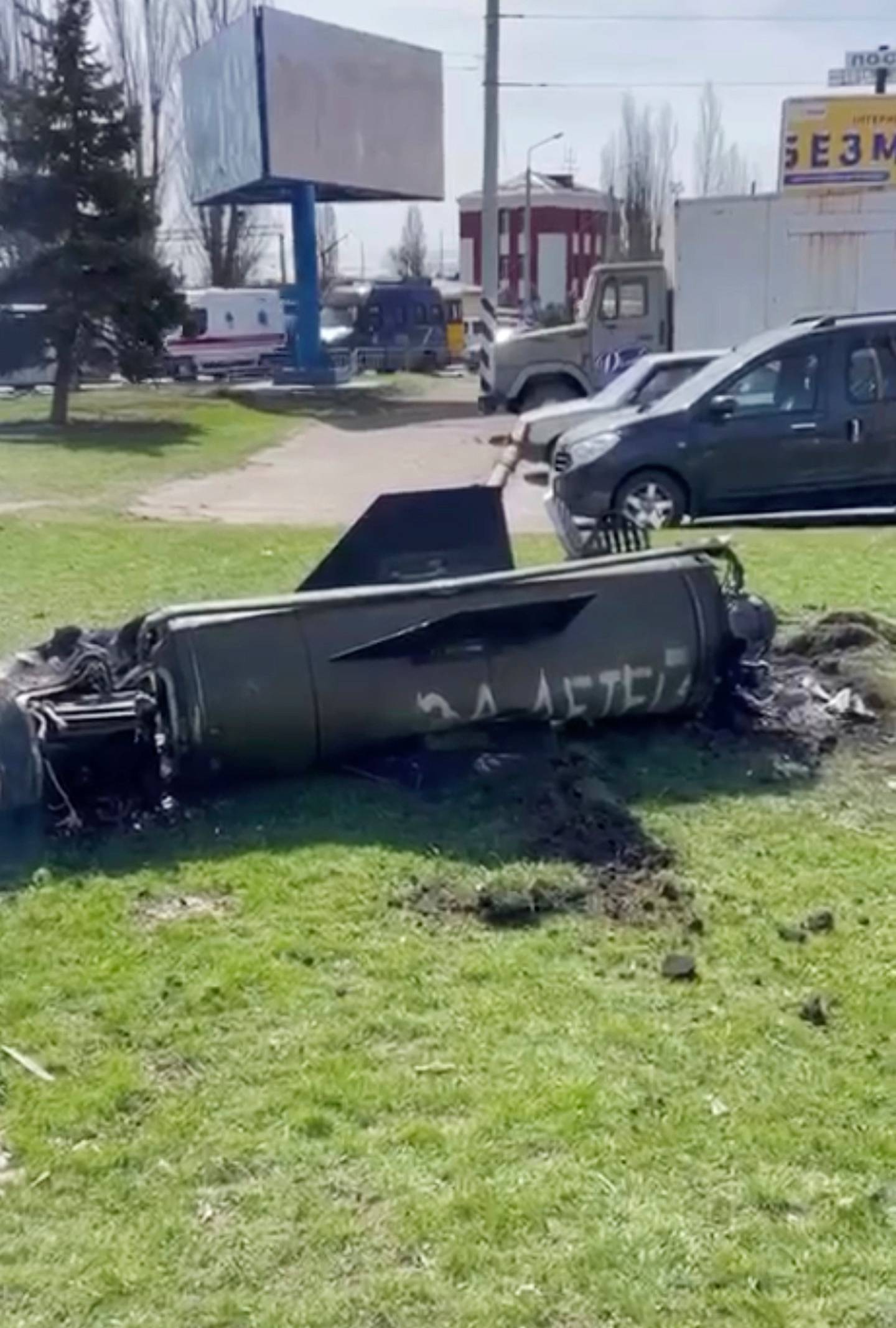 In this image from video, a fragment of a Tochka-U missile with writing in Russian 'For children' lies on grass after Russian shelling at the railway station in Kramatorsk. Photo / AP

In a rare acknowledgment of the war's cost to Russia, a Kremlin spokesman said on Thursday that the country has suffered major troop causalities during its six-week military operation in Ukraine.

"Yes, we have significant losses of troops and it is a huge tragedy for us," Kremlin spokesman Dmitry Peskov told British broadcaster Sky.

Peskov also hinted the fighting might be over "in the foreseeable future," telling Sky that Russian troops were "doing their best to bring an end to that operation."

Asked about his remarks Friday, Peskov said his reference to troop losses was based on the most recent Russian Defense Ministry numbers. The ministry reported on March 25 that a total of 1351 Russian troops had been killed in Ukraine.

"It is a significant number," Peskov said during his daily conference call with reporters. 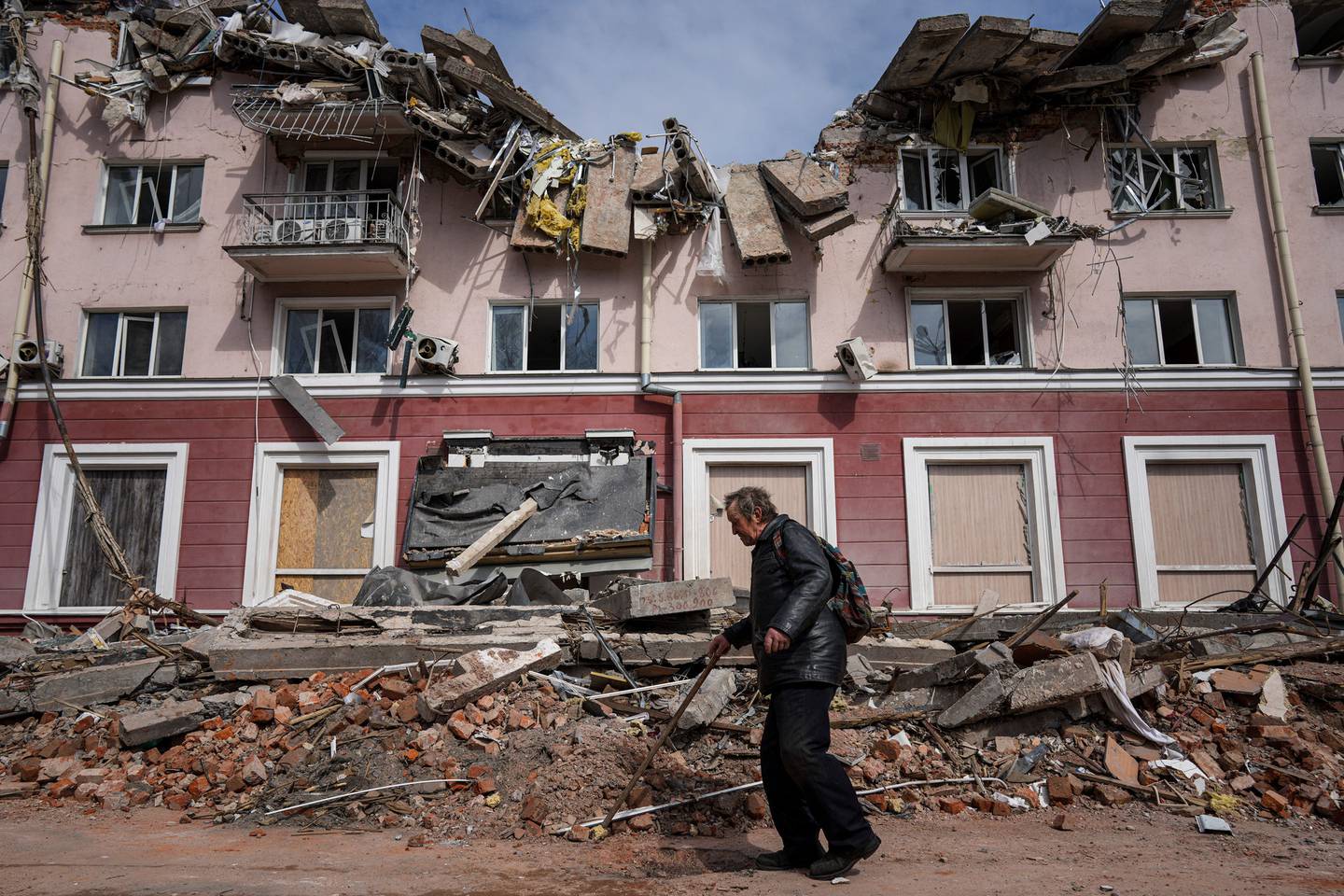 A man walks past an apartments building damaged by shelling in Chernihiv, Ukraine, on April 7. Photo / AP

In anticipation of intensified attacks by Russian forces, hundreds of Ukrainians fled villages in the Mykolaiv and Kherson regions that were either under attack or occupied.

Marina Morozova and her husband fled from Kherson, the first major city to fall to the Russians.

"They are waiting for a big battle. We saw shells that did not explode. It was horrifying," she said.

Morozova, 69, said only Russian television and radio was available. The Russians handed out humanitarian aid, she said, and filmed the distribution.

Anxious to keep moving away from Russian troops, the couple and others boarded a van that would take them west. Some will try to leave the country, while others will remain in quieter parts of Ukraine.

On Thursday, a day after Russian forces began shelling their village in the southern Mykolaiv region, Sergei Dubovienko, 52, drove north in his small blue Lada with his wife and mother-in-law to Bashtanka, where they sought shelter in a church.

"They started destroying the houses and everything" in Pavlo-Marianovka, he said. "Then the tanks appeared from the forest. We thought that in the morning there would be shelling again, so I decided to leave."

The UN refugee agency, UNHCR, said that more than 4.3 million, half of them children, have left Ukraine since Russia launched its invasion on February 24 and sparked Europe's largest refugee crisis since World War II.

The International Organisation for Migration estimates more than 12 million people are stranded in areas of Ukraine under attack.

The United Nations' humanitarian chief told the Associated Press on Thursday that he's "not optimistic" about securing a cease-fire after meeting with officials in Kyiv and in Moscow this week, given the lack of trust between the sides. He spoke hours after Russian Foreign Minister Sergey Lavrov accused Ukraine of backtracking on proposals it had made over Crimea and Ukraine's military status.

Part of that, Heger says is "to offer options for transporting grains, including wheat." Ukraine is a major world wheat supplier and Russia's war on Ukraine is creating shortages, notably in the Middle East.

Western nations have stepped up sanctions, and the Group of Seven major world powers warned that they will keep adding measures until Russian troops leave Ukraine.

The US Congress voted Thursday to suspend normal trade relations with Russia and ban the importation of its oil, while the EU approved other new steps, including an embargo on coal imports. The UN General Assembly, meanwhile, voted to suspend Russia from the world organisation's leading human rights body.

US President Joe Biden said the UN vote demonstrated how "Putin's war has made Russia an international pariah." He called the images coming from Bucha "horrifying."

"The signs of people being raped, tortured, executed — in some cases having their bodies desecrated — are an outrage to our common humanity," Biden said.