Warning: This story contains graphic images that may be distressing to some readers

The outskirts of Kharkiv have the feel of an open-air morgue, where the dead lie unclaimed and unexplained, sometimes for weeks on end, as Ukrainian and Russian forces fight for control of slivers of land.

There is the charred body of a man, unidentifiable, propped on an anti-tank barrier made of crossed I-beams outside a town that has been under the control of both sides in recent days. There are the dead soldiers, apparently Russian, four of them arranged in a Z like the military symbol found on Russian armored vehicles, visible to the Russian drones that continuously buzz overhead. The door to an apartment opens to three bodies inside.

Precisely how any of this happened will likely never be known.

Kharkiv, Ukraine's second-largest city, has been under sustained Russian attack since the beginning of the war in late February. With the Russian offensive intensifying in the east, the Russian onslaught has grown fiercer.

Considered a strategic and industrial prize, territory on the eastern city's outskirts has gone back and forth between Russian and Ukrainian forces for weeks now as the fighting shifts from village to village. Many, but by no means all, of Kharkiv's 1 million residents have fled. 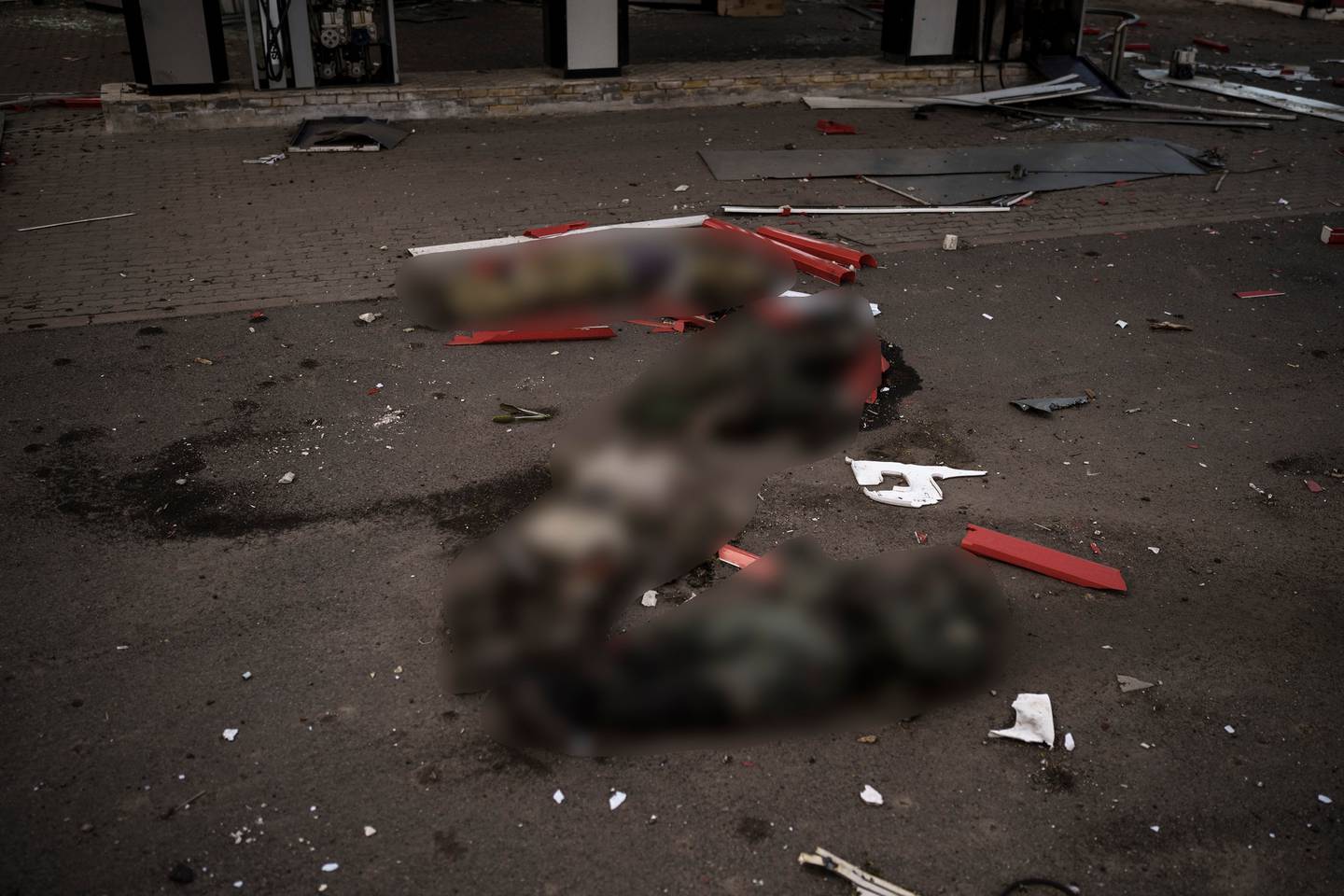 The bodies of unidentified men, believed to be Russian soldiers, arranged in a Z, lie near a village recently retaken by Ukrainian forces on the outskirts of Kharkiv. Photo / AP

Associated Press journalists saw the bodies formed into a Z, wearing the white arm bands commonly used by Russian soldiers, and with some Russian medical kits alongside them. They were found on a front line where fighting had been taking place for days. They, along with the burned man, were taken to a morgue on Monday. There was no explanation for the Z formation — a symbol of the Russian invasion — nor the burned body propped on the barrier. Either could be considered a war crime, for disrespecting the dignity of the dead.

Next will come the investigation into their identities, maybe an attempt to notify family.

But even that is hard to untangle. The body of a man with Ukrainian insignia turned out to have the identity papers of a Russian soldier. The apartment where the three bodies were found had been badly shelled, but it wasn't clear what killed them.

Shelling and airstrikes are a daily threat everywhere here, to everyone. And, as long as that remains true, death can come at anytime, without anyone around to answer why.

It was a rare glimpse into the death and atrocities of the war. Getting a full picture of the unfolding battle in eastern Ukraine has been difficult because airstrikes and artillery barrages have made it extremely dangerous for journalists to move around. Russia has severely restricted reporting in the combat zone; Ukraine's government has imposed fewer limits, mostly on how quickly material can be published or about military installations.