One is a restaurateur who fled Belarus when he learned he was about to be arrested for criticising President Alexander Lukashenko. Another was given the choice of either denouncing fellow opposition activists or being jailed. And one is certain his brother was killed by the country's security forces.

What united them is their determination to resist Lukashenko by fighting against Russian forces in Ukraine.

Belarusians are among those who have answered a call by Ukrainian President Volodymyr Zelenskyy for foreign fighters to go to Ukraine and join the International Legion for the Territorial Defence of Ukraine, given the high stakes in a conflict which many see as a battle pitting dictatorship against freedom.

For the Belarusians, who consider Ukrainians a brethren nation, the stakes feel especially high.

Russian troops used Belarusian territory to invade Ukraine early in the war, and Lukashenko has publicly stood by longtime ally, Russian President Vladimir Putin, describing him as his "big brother". Russia, for its part, has pumped billions of dollars into shoring up Lukashenko's Soviet-style, state-controlled economy with cheap energy and loans.

Weakening Putin, the Belarusian volunteers believe, would also weaken Lukashenko, who has held power since 1994, and create an opening to topple his oppressive government and bring democratic change to the nation of nearly 10 million.

For many of the Belarusians, their base is Poland, a country on Nato's eastern flank that borders Belarus and Ukraine and which has become a haven for pro-democracy Belarusian dissidents before becoming one for war refugees from Ukraine.

Some of the volunteer fighters are already in Poland, and some only pass through briefly on their way to Ukraine. Volunteers from Belarus practice at a shooting range near Warsaw, Poland. Photo / AP

"We understand that it's a long journey to free Belarus and the journey starts in Ukraine," said Vadim Prokopiev, a 50-year-old businessman who used to run restaurants in Minsk. He fled the country after a rumour spread that he would be arrested for saying publicly that the government wasn't doing enough for small businesses.

"When the Ukraine war will be eventually over, our war will just start. It is impossible to free the country of Belarus without driving Putin's fascist troops out of Ukraine," he said.

Prokopiev heads a unit called "Pahonia" that has been training recruits. The Associated Press interviewed him as he oversaw an exercise involving firing pistols and other weapons into old cars in simulations of war scenarios. They were being trained by a Polish ex-police officer who is now a private shooting instructor. 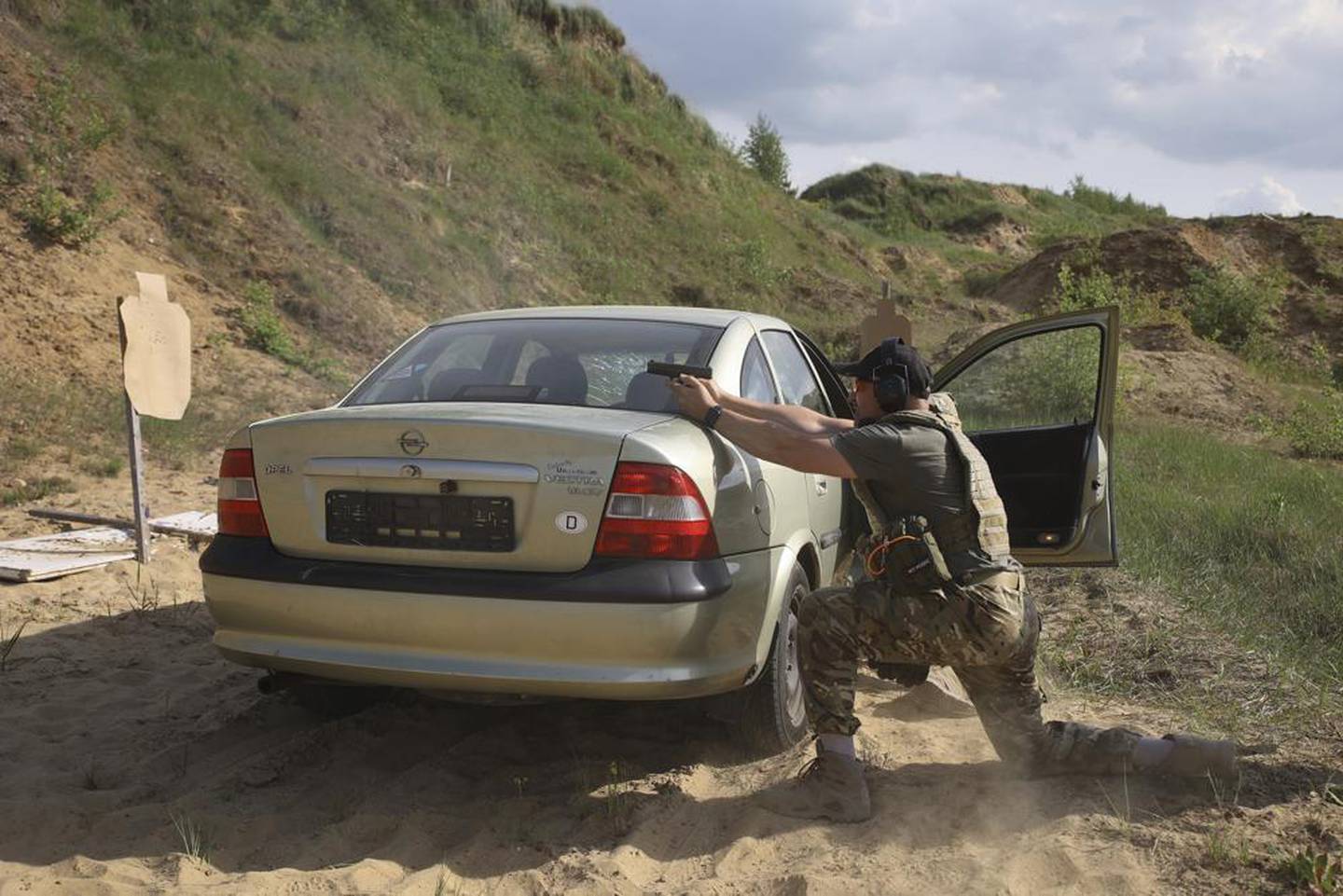 Prokopiev wants his men to gain critical battle experience, and he hopes that one day soon a window of opportunity will open for democratic change in Belarus. But he says it will require fighters like himself to be prepared, and for members of the security forces in Belarus to turn against Lukashenko.

The 2020 presidential election in Belarus was widely seen as fraudulent, but massive street protests against Lukashenko being awarded a sixth term were met with a brutal government crackdown, leading to Prokopiev's belief that no "velvet revolution" can be expected in Belarus.

"Power from Lukashenko can only be taken by force," he said.

On Saturday, men with another unit, Kastus Kalinouski, gathered in Warsaw in the Belarus House, where sleeping bags, mats and other Ukraine-bound equipment were piled high. They sat together, talking and snacking on chocolate and coffee as they prepared to deploy to Ukraine later in the day. Most didn't want to be interviewed out of concerns for their security and that of family back home. 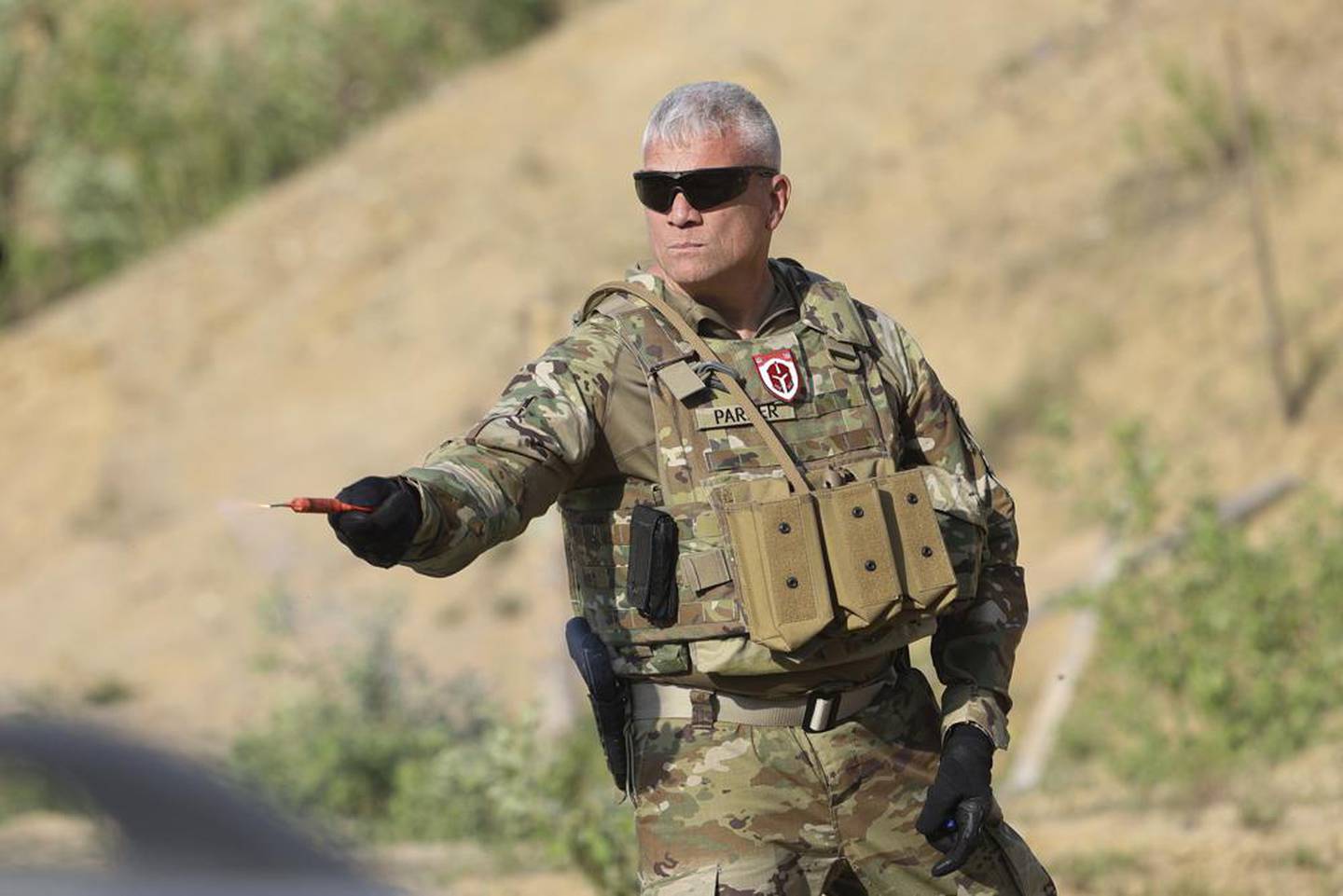 The regiment, formally part of Ukraine's armed forces, was named after the leader of an anti-Russian insurrection in the 19th century who is viewed as a national hero in Belarus.

Lukashenko has called them "crazy Belarusian citizens", and authorities have put 50 members of Kastus Kalinouski on a wanted list and initiated criminal cases against them.

One willing to describe his motivations was a 19-year-old, Ales, who has lived in Poland since last year. He fled Belarus after the country's security service, which is still called the KGB, detained him and forced him to denounce an anti-Lukashenko resistance group in a video. He was told he would be jailed if he didn't comply.

Dressed all in black from a hooded sweatshirt to his boots, he admitted to feeling nervous as the moment arrived to head into Ukraine. He had never received any military training, but would get it once he arrived in Ukraine. But just how much, and where he would be deployed, he didn't yet know.

He said he was going to fight not only to help Ukraine "but to make Belarus independent". He said it was also important for him that people realise that the Belarusian people are very different from the Lukashenko government.

It is a dangerous mission. At least four volunteers from the Kastus Kalinouski unit have already died. A deputy commander, Aliaksiej Skoblia, was killed in a Russian ambush near Kyiv and was later recognised by Zelenskyy as a Hero of Ukraine.

Still, the fighting in Ukraine can feel less dangerous at times than seeking to resist Lukashenko at home, where many activists are in prison facing harsh conditions. 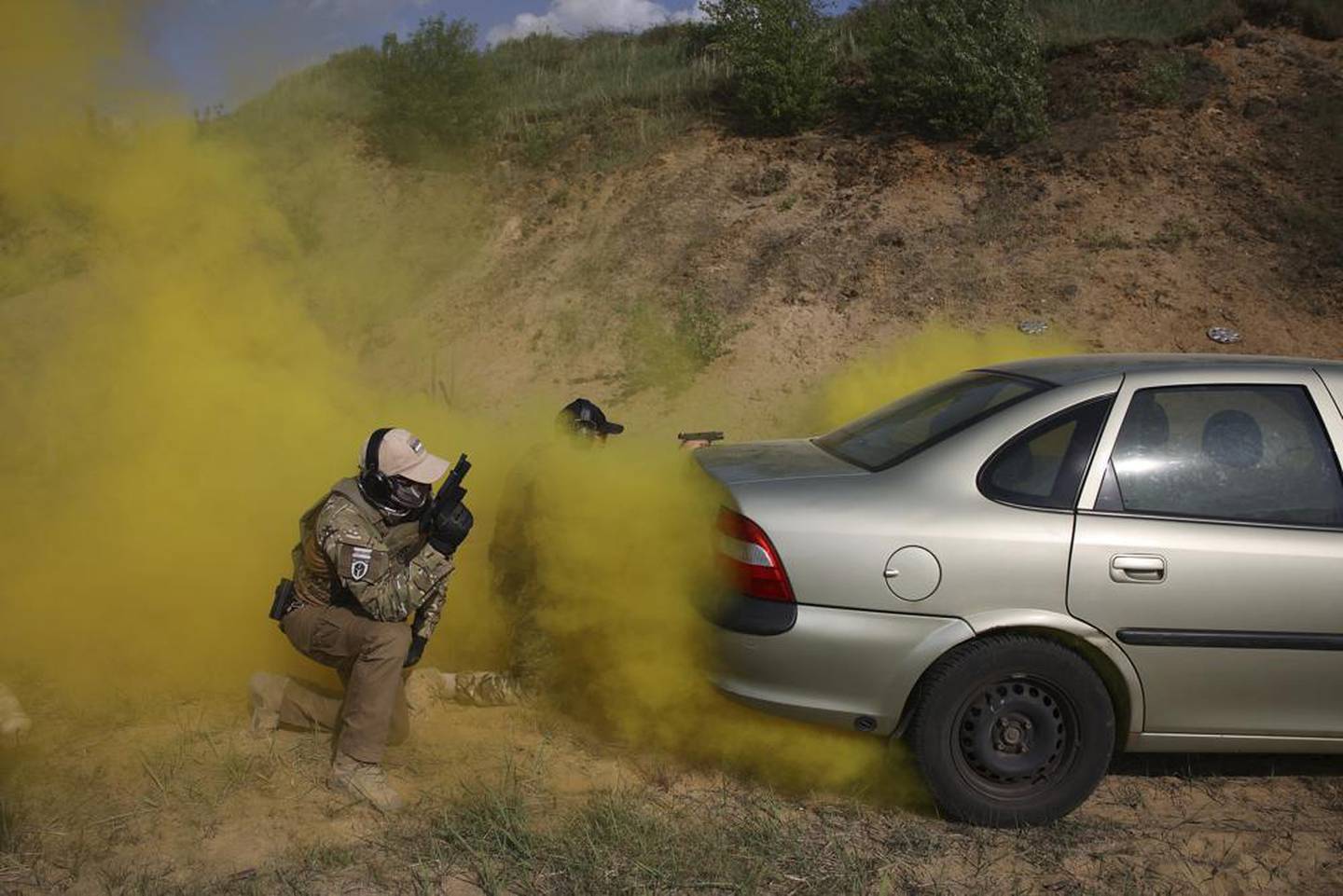 Volunteers from Belarus practice at a shooting range near Warsaw, Poland. Photo / AP

Organising the Kastus Kalinouski recruits was Pavel Kukhta, a 24-year-old who already fought in Ukraine's Donbas region in 2016, suffering burns and the loss of most of hearing in one ear.

Kukhta said his half-brother, Nikita Krivtsov, was found hanged in a wooded area outside Minsk in 2020. Police said there was no evidence of foul play but Kukhta says he and the rest of the family are certain Krivtsov was killed for joining the anti-Lukashenko protests.

But he insisted that his support for Ukraine is not about revenge, only about fighting for democratic change.

"If Putin is defeated, Lukashenko will be defeated."