Robert Durst, the wealthy New York real estate heir and failed fugitive who was dogged for decades with suspicion in the disappearance and deaths of those around him before he was convicted of killing his best friend and sentenced to life in prison, has died. He was 78.

Durst died today in a state prison hospital facility in Stockton, attorney Chip Lewis said. He said the death was from natural causes due to a number of ailments.

Durst was convicted in September of shooting Susan Berman at point-blank range at her Los Angeles home in 2000. He was sentenced October 14 to life in prison without parole.

Durst had long been suspected of killing his wife, Kathie, who went missing in New York 1982 and was declared legally dead.

But only after Los Angeles prosecutors proved that the motive in Berman's death was to silence her because she helped him cover up Kathie's killing, was he indicted by a New York grand jury in November for second-degree murder in his wife's death. 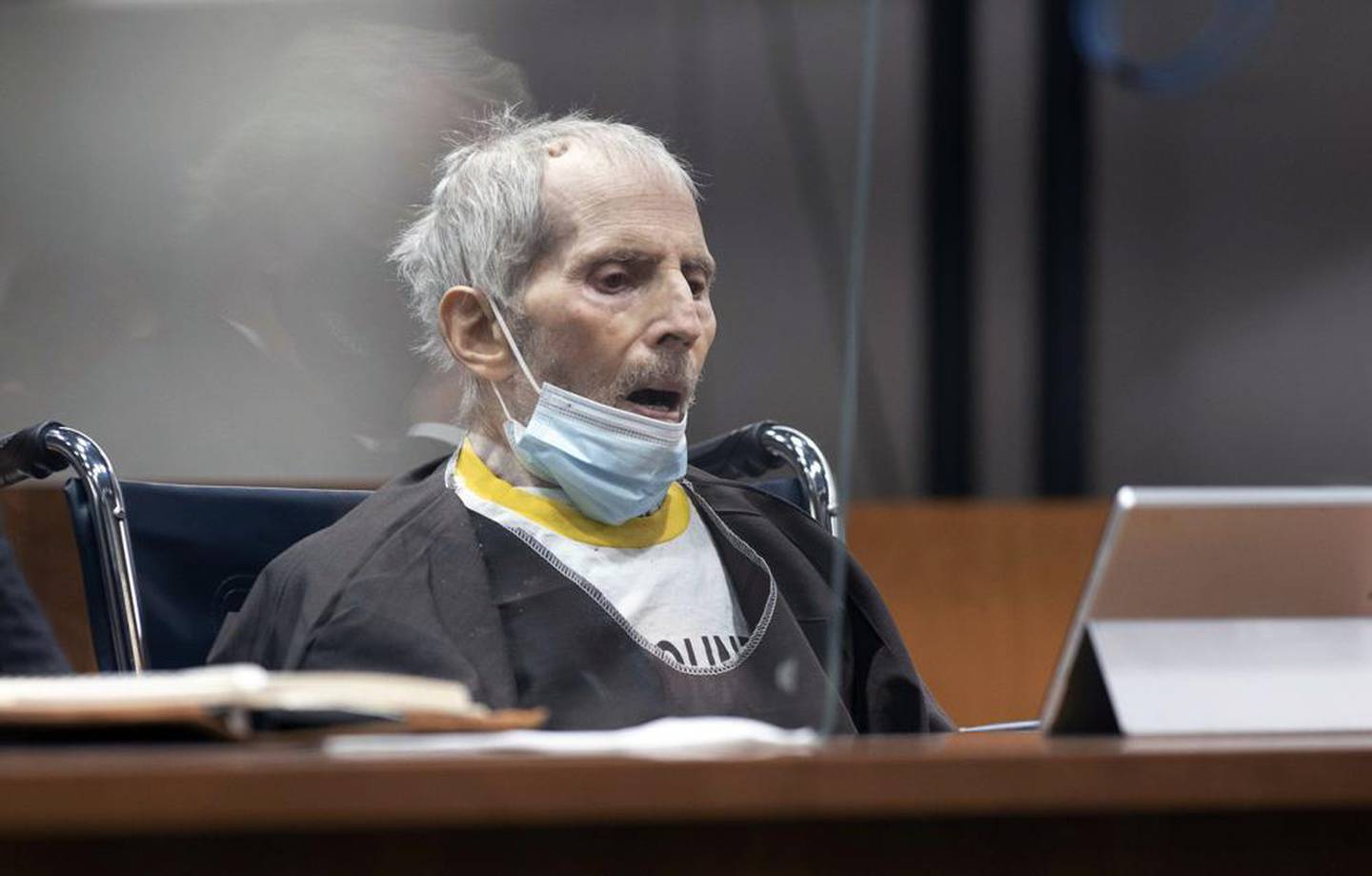 New York real estate scion Robert Durst, 78, sits in the courtroom as he is sentenced to life in prison without chance of parole. Photo / AP

Los Angeles prosecutors told jurors that Durst got away with murder in Texas after shooting a man who discovered his identity when he was hiding out in Galveston after Berman's killing. Durst was acquitted of murder in that case in 2003, after testifying he shot the man as they struggled for a gun.

Deputy Los Angeles District Attorney John Lewin said jurors told him after the verdict that they believed Durst murdered Morris Black in Texas and had killed his wife.

Durst discussed the cases and made several damning statements including a stunning confession during an unguarded moment in the six-part HBO documentary series "The Jinx: The Life and Deaths of Robert Durst." 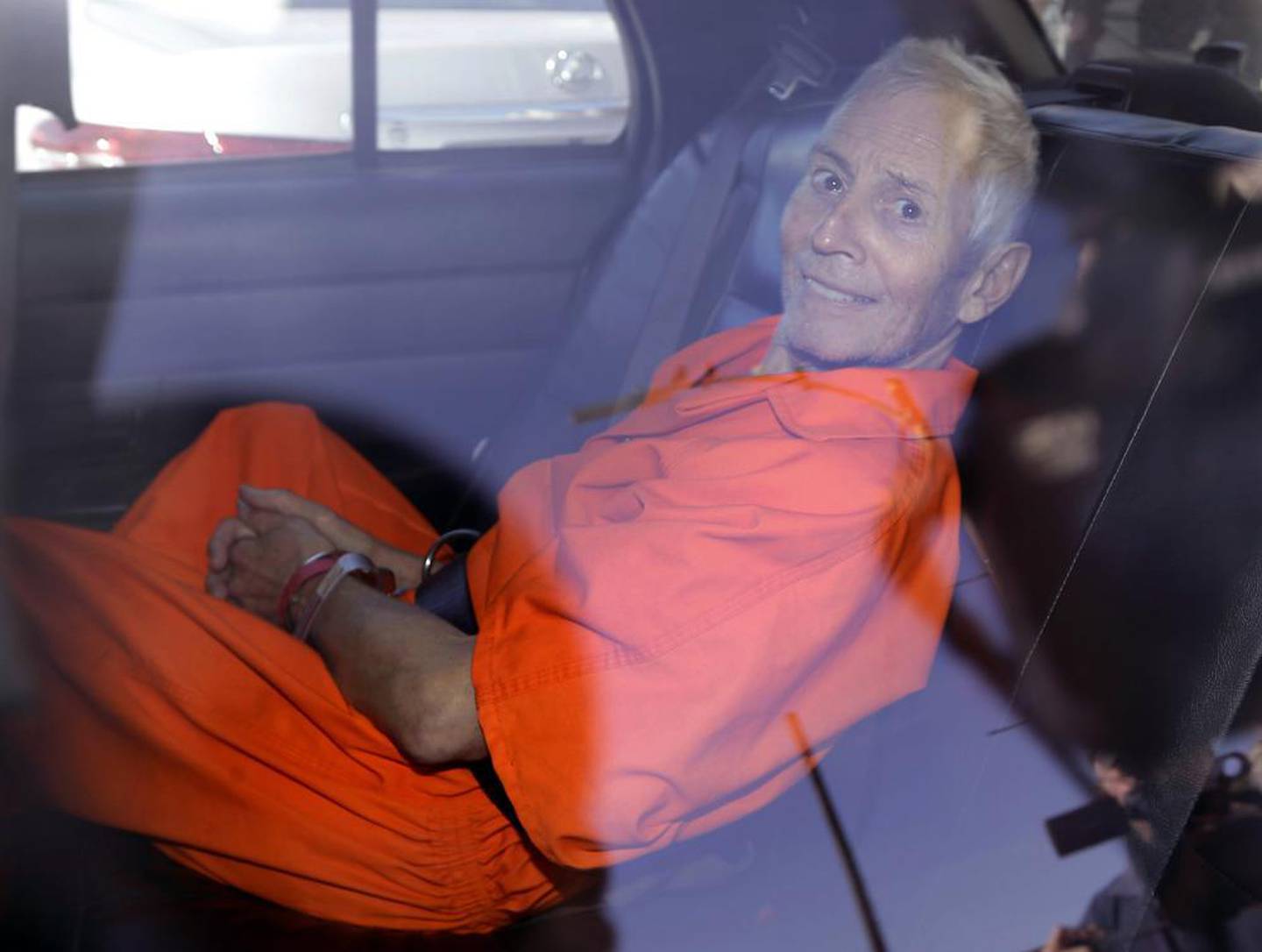 The show made his name known to a new generation and brought renewed scrutiny and suspicion from authorities. He was arrested in Berman's killing the night before the final episode, which closed with him mumbling to himself in a bathroom while still wearing a hot mic, saying: "You're caught! What the hell did I do? Killed them all, of course."

The quotes were later revealed to have been manipulated for dramatic effect but the production – done with Durst's co-operation against the advice from his lawyer and friends – dredged up new evidence including an envelope that connected Durst to the scene of Berman's killing as well as incriminating statements he made.

Police had received a note directing them to Berman's home with only the word "CADAVER" written in block letters.

In interviews given between 2010 and 2015, Durst told the makers of the "The Jinx" that he didn't write the note, but whoever did, had killed her.

"You're writing a note to the police that only the killer could have written," Durst said.

His defence lawyers conceded in the run-up to trial that Durst had written the note, and prosecutors said it amounted to a confession.

Clips from "The Jinx," and from the 2010 movie "All Good Things" in which Ryan Gosling played a fictionalised version of Durst, had starring roles at trial.

As did Durst himself. His attorneys again took the risk of putting him on the stand for what turned out to be about three weeks of testimony. It didn't work as it had in Texas.

Under devastating cross-examination by prosecutor John Lewin, Durst admitted he lied under oath in the past and would do it again to get out of trouble.

It long appeared he would avoid any such convictions.

Durst went on the run in late 2000 after New York authorities reopened an investigation into his wife's disappearance, renting a modest apartment in Galveston and disguising himself as a mute woman.

In 2001, the body parts of a neighbour, Morris Black, began washing up in Galveston Bay.

Arrested in the killing, Durst jumped bail. He was arrested for shoplifting a sandwich six weeks later in Bethlehem, Pennsylvania, where he had gone to college. Police found $37,000 cash and two handguns in his car.

He would testify that Black had pulled a gun on him and died when the weapon went off during a struggle. He told jurors in detail how he bought tools and dismembered and disposed of Black's body. He was acquitted of murder. He pleaded guilty to violating his bail, and to evidence tampering for the dismemberment. He served three years in prison.

Durst had bladder cancer and his health deteriorated during the Berman trial. He was escorted into court in a wheelchair wearing prison attire each day because his attorneys said he was unable to change into a suit. But the judge declined further delays after a 14-month pause during the coronavirus pandemic.

DeGuerin said Durst was "very, very sick" at his sentencing hearing and it was the worst he looked in the 20 years he spent representing him.

Durst entered the courtroom with wide-eyed vacant stare. Near the end of the hearing after Berman's loved ones told the judge how her death upended their lives, Durst coughed hard and then appeared to struggle to breathe. His chest heaved and he pulled his mask down below his mouth and began to gulp for air.

The son of real estate magnate Seymour Durst, Robert Durst was born April 12, 1943, and grew up in Scarsdale, New York. He would later say that at age 7, he witnessed his mother's death in a fall from their home.

He graduated with an economics degree in 1965 from Lehigh University, where he played lacrosse. He entered a doctoral program at the University of California, Los Angeles, where he met Berman, but dropped out and returned to New York in 1969.

He became a developer in the family business, but his father passed him over to make his younger brother, and rival, Douglas the head of the Durst Organization in 1992.

In January 1982, his wife was a student in her final year at medical school when she disappeared. She had shown up unexpectedly at a friend's dinner party in Newtown, Connecticut, then left after a call from her husband to return to their home in South Salem, New York.

Robert Durst told police he last saw her when he put her on a train to stay at their apartment in Manhattan because she had classes the next day.

He would divorce her eight years later, claiming spousal abandonment, and in 2017, at her family's request, she was declared legally dead.

Robert Durst is survived by his second wife Debrah Charatan, whom he married in 2000. He had no children.

Under California law, a conviction is vacated if a defendant dies while the case is under appeal, said Laurie Levenson, a law professor at Loyola Law School.

Lewis said an appeal was filed for Durst.