Auckland mayoral candidate Efeso Collins and his family were nearly run off the road on Monday by "irresponsible cowards" hurling abuse at them.

The couple and their two daughters, aged 9 and 2, were in Collins' campaign vehicle when two cars dangerously tried to cut them off at the merging lane near KFC in Te Atatu.

Collins said his wife Fia, who was driving, was cut off by the two cars at the same time doing fingers at her.

"She said they had been behind her and had noticed one of them, in particular, had been driving on her bumper.

"To be hurled abuse at is disappointing because our girls are witnessing this behaviour," Collins told the Herald.

Collins said his campaign team reported the incident to the police road incident line with details of the licence plates.

In a Facebook post, Fia Collins said her first thought was "maybe they didn't see us but then they beeped their horns, wound their windows down and did all sorts of hand signals at us.

"I understand there will be people who will disagree with us - that's cool. But what's not cool is driving dangerously and causing an accident on the road. It's not good for you or for us.

"So if you have something to say it's not hard to find me or Fes - contact us properly and let's have a proper conversation. But please don't be an irresponsible coward and drive like an idiot on the road," she said.

Collins said Fia was ruffled by the incident, saying the level of aggression towards his family was disconcerting.

The Manukau councillor was not sure what the people in the two cars were angry about, but had experienced the odd obscenity when driving his campaign vehicle.

"I understand there are people who disagree with me and the positions I take, but the fact it triggers people to yell out that kind of abuse is saddening for society."

Fia Collins said putting up your hand for public office is a privilege, but one that comes at a cost that may not always be seen or understood. Shane Henderson, a councillor for Waitakere where the incident occurred and who drives a car with his name emblazoned on it, said he was "ashamed to say this behaviour happens to me far too many times".

"It saddens me that people don't seem to worry that it's my kids in the car that they're endangering too," said Henderson.

Councillor Angela Dalton said "this is totally not okay" and councillor Cathy Casey was glad to see the "threatening and dangerous behaviour" being called out.

"The hating has to stop," Casey said.

Collins is the second mayoral candidate to encounter aggressive behaviour outside the cut and thrust of the election campaign.

On June 18, mayoral candidate Craig Lord and his son went to hospital with minor injuries after an altercation with an alleged drunk driver near their home in Blockhouse Bay. 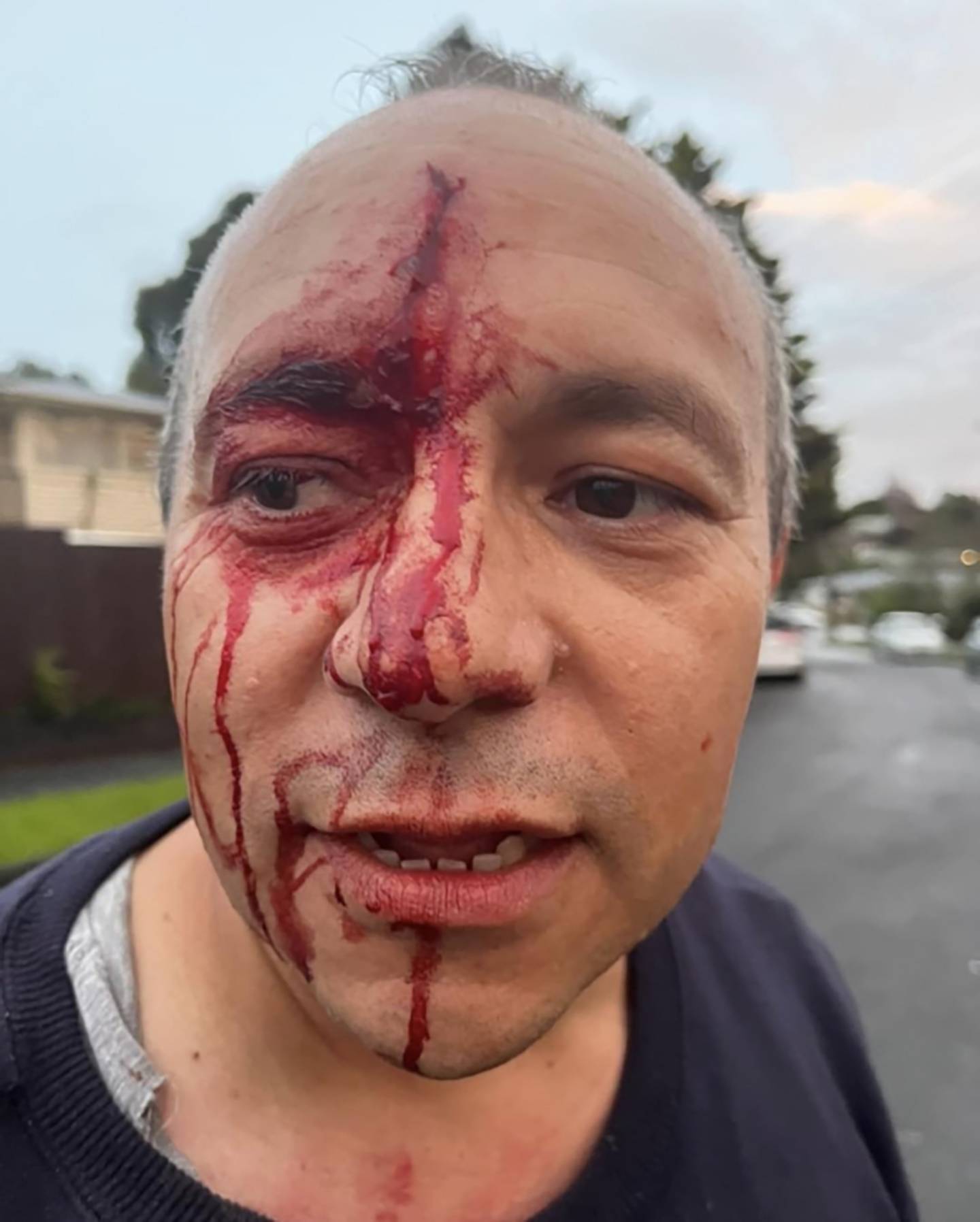 Auckland mayoral candidate Craig Lord and his son went to hospital with minor injuries after an altercation with an alleged drink driver. Photo / Supplied

Lord, who received stitches to his brow, had gone door knocking after seeing a car spinning its wheels in the rain lost control and sideswiped his neighbour's car.

Shortly after he was elected to the council in 2016, Collins alleged he was the victim of racial discrimination at a swearing-in ceremony at Auckland Town Hall.

Collins said his wife, then 4-year-old daughter and elders were initially told that they could not sit in a special area reserved for council guests. When his wife said they were guests, no-one believed them.

An investigation was conducted between Auckland Council and Regional Facilities Auckland - the council-controlled organisation responsible for the Town Hall.

The investigation found that the Collins' family were eventually seated in the area reserved for councillors' guests and did not find any Town Hall staff responsible for causing offence to family members.