A year after migrants started crossing into the European Union from Belarus to Poland, Polish Prime Minister Mateusz Morawiecki and top security officials visited the border area on Thursday (local time) to mark the completion of a new steel wall.

Polish authorities will also lift a state of emergency along the border that has blocked journalists, rights workers and others from witnessing a human rights crisis. At the very least, 20 migrants have died in the area's freezing forests and bogs.

The Polish government characterises the wall as part of the fight against Russia; human rights defenders see it as representing a huge double standard, with groups of white Christian refugees from Ukraine made up mostly of women welcomed but predominantly male Muslims from Syria and other countries rejected and mistreated.

"The first sign of the war in Ukraine was [Belarus President] Alexander Lukashenko's attack on the Polish border with Belarus," Morawiecki told a news conference.

"It was thanks to [our] political foresight and the anticipation of what may happen that we may focus now on helping Ukraine, which is fighting to protect its sovereignty." 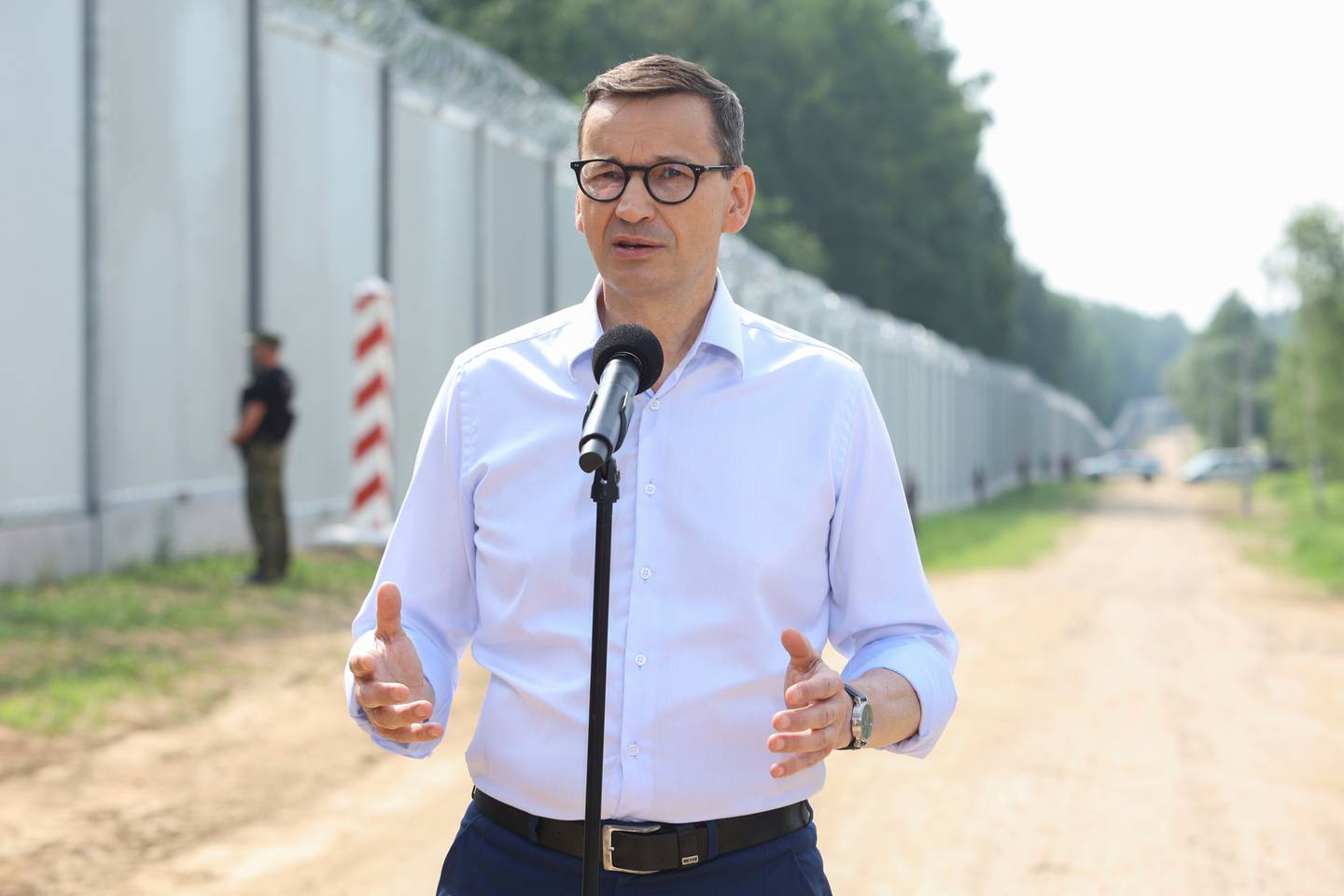 As Poland opened its gates to millions of Ukrainians fleeing Russia's invasion, work was well under way to build the 5.5m-high wall along 186km of its northern frontier with Belarus. It still needs electronic surveillance systems to be installed.

It's meant to keep out asylum seekers of a different type: those fleeing conflict and poverty in the Middle East and Africa, who were encouraged to try their luck by Belarus' authoritarian regime — a close ally of Russia — as part of a feud with the EU.

One of the asylum-seekers was 32-year-old Ali, who left Syria late last year after reading on social media that the easiest way into the EU was to fly to Belarus and walk into Poland.

Ali, from a village outside Hama in western Syria, flew to the Belarusian capital, Minsk, and set out to find an unguarded spot in the forest where he could sneak over into the EU.

"I was looking for a place where I can live in safety, away from the oppression and hopelessness back home," he said in an interview this week with The Associated Press in Berlin.

Ali, who didn't give his last name, fearing repercussions for his family, was not prepared for the violence and sub-zero temperatures that awaited him in the vast forests and swamps.

"There were nights when I went to sleep on the bare ground in the woods thinking I would not wake up again," Ali said.

Natalia Gebert, founder and CEO of Dom Otwarty, or Open House, a Polish NGO that helps refugees, said: "If you give a lift to a refugee at the Ukrainian border you are a hero. If you do it at the Belarus border you are a smuggler and could end up in jail for eight years." 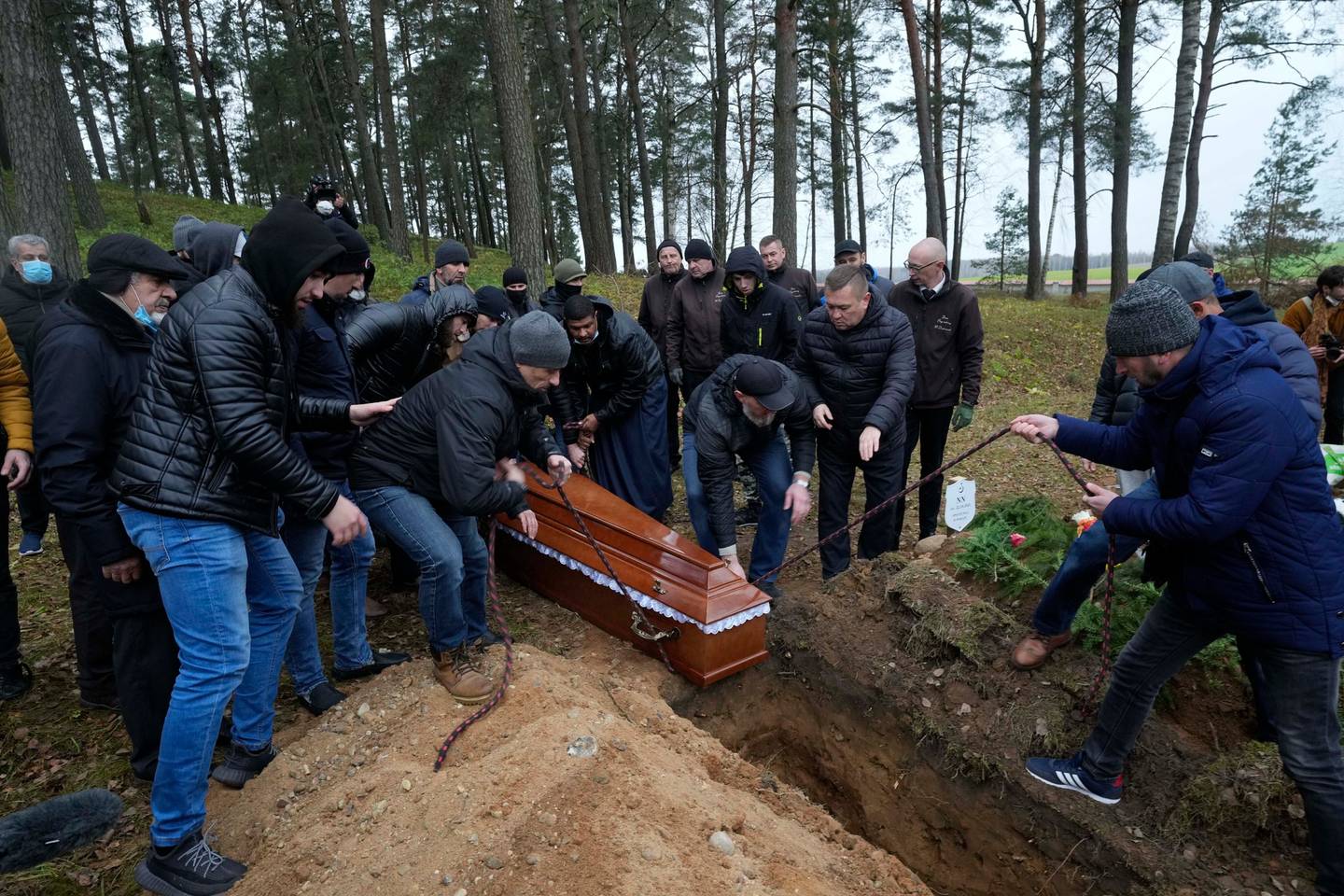 About a dozen people from the Middle East and elsewhere have died along the Poland-Belarus border amid a standoff involving migrants between the two countries. Photo / AP

Belarus had never before been a key migration route into the EU — until its President Alexander Lukashenko began encouraging would-be asylum-seekers in the Middle East to travel to Minsk. Soon, people from Syria, Iraq, Yemen, Afghanistan and African countries flocked to the EU's eastern edge, entering Poland and neighbouring Lithuania and Latvia.

Though migration slowed in the winter, people continued to try to enter the EU through Poland, a route seen as less dangerous than crossing the Mediterranean Sea, where many have drowned in past years, Gebert said.

Ali, whose small makeup business in Syria was destroyed when Sunni extremists learned he belonged to the Alawite religious minority, says he got pushed back six times by Polish border guards.

But Belarusian guards beat him, stole his money and forced him to take off all his clothes in the middle of the winter. He wanted to give up and return to Minsk, but the guards wouldn't let him. They made him and others lie on the cold ground, screamed at them, approached closely with a snarling dog and kicked Ali repeatedly in the chest.

Polish border patrol officers broke his phone's SIM card, he said. He went without water and food for days, lost in the swamps.

A Human Rights Watch report this month said Poland "unlawfully, and sometimes violently, summarily pushes migrants and asylum-seekers back to Belarus, where they face serious abuses, including beatings and rape by border guards and other security forces".

While some Poles support the government's tough stance, many border region residents have throughout the winter and spring sought to help migrants trapped in the forest, several requiring medical help.

A play that premiered in Warsaw this week, "Responsibility", asks how Poland can accept millions of Ukrainians while withholding help to thousands of others. One character asks: "Why does the Polish state demand that a child from Aleppo sits in a bog in sub-zero temperatures and withhold the aid it gives the child from Mariupol?"

Ali spent 16 days in the forests, before he and others used pliers to open a hole in a border fence. Some villagers gave him food and water, but soon he was apprehended by police and taken to a detention centre.

Over the next three months, he was moved through several closed camps.

Guards carried batons and stun guns, he said, and every time before they moved him to a different camp they made him and other detainees strip naked in public. Nobody addressed him by his name, but by an identification number.

In March, he was handed his papers and taken to the Debak centre for foreigners in Otrebusy southwest of Warsaw, where he was told: "Go away, go to Germany."

Ali arrived in Berlin in April and applied for asylum. Rights activists and psychologists have documented his account and also those of other asylum-seekers who say they suffered abuse by both Belarusian and Polish border guards.

"I feel better here. People call me by my name again," Ali said. "But I'm worried all the time that the Germans will send me back to Poland."