The Queen sat and mourned alone, a tearful Prince Charles walked behind the coffin and Princes William and Harry were finally reunited during a sad and solemn farewell to Prince Philip at his funeral at Windsor Castle today.

Queen Elizabeth II bowed her head as she accompanied her husband's coffin on its final journey and their eldest son Prince Charles cried as he walked behind the casket into St George's Chapel.

Princes William and Harry joined the solemn procession, walking with their father Charles and other members of the Royal Family behind the coffin - although the brothers were separated during the walk by their cousin Peter Phillips. 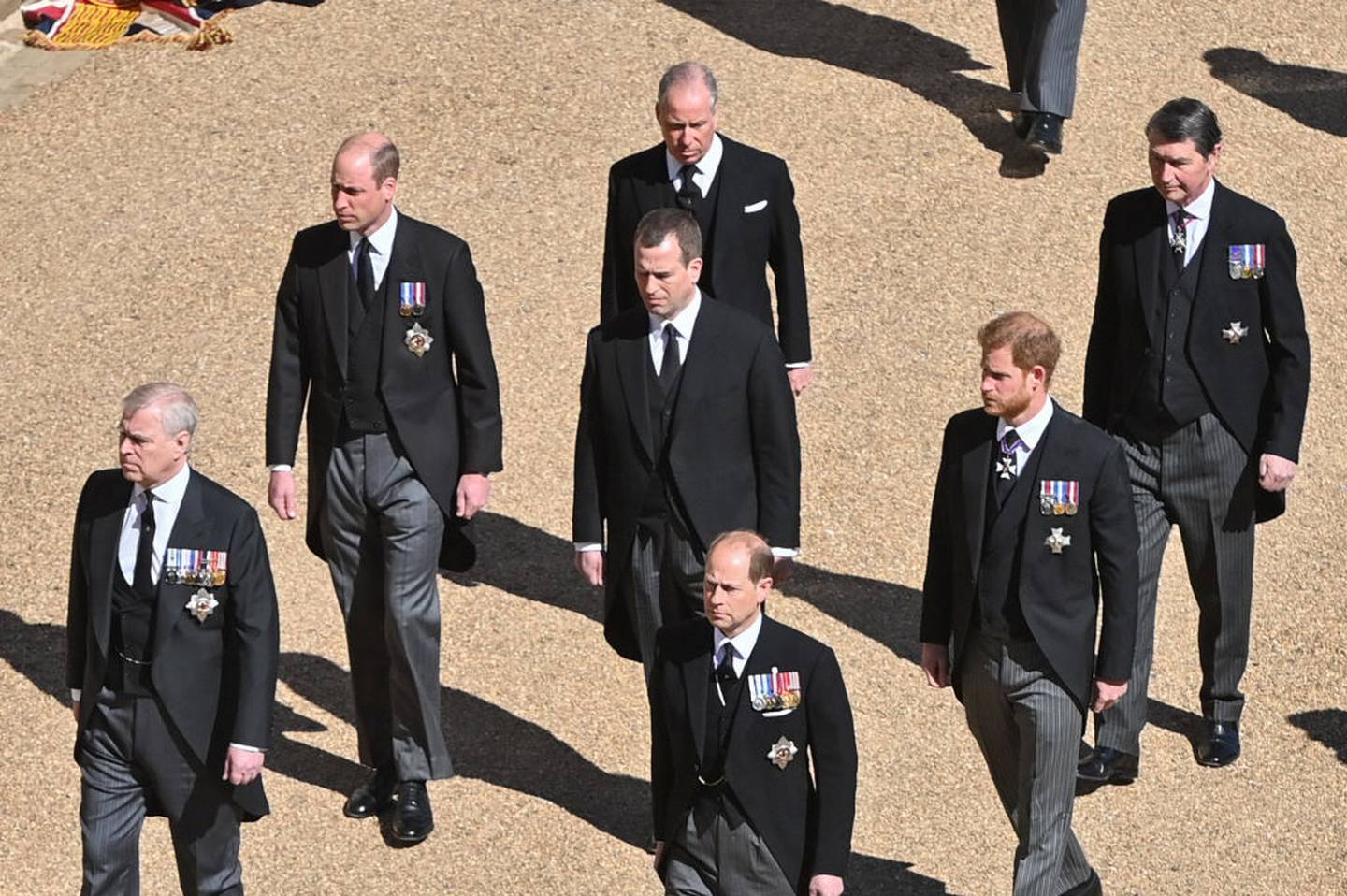 The Queen, 94, sat nearest the altar, alone in the chapel's Quire, two metres from any family members and wearing a face mask. She took no active part in the ceremony. 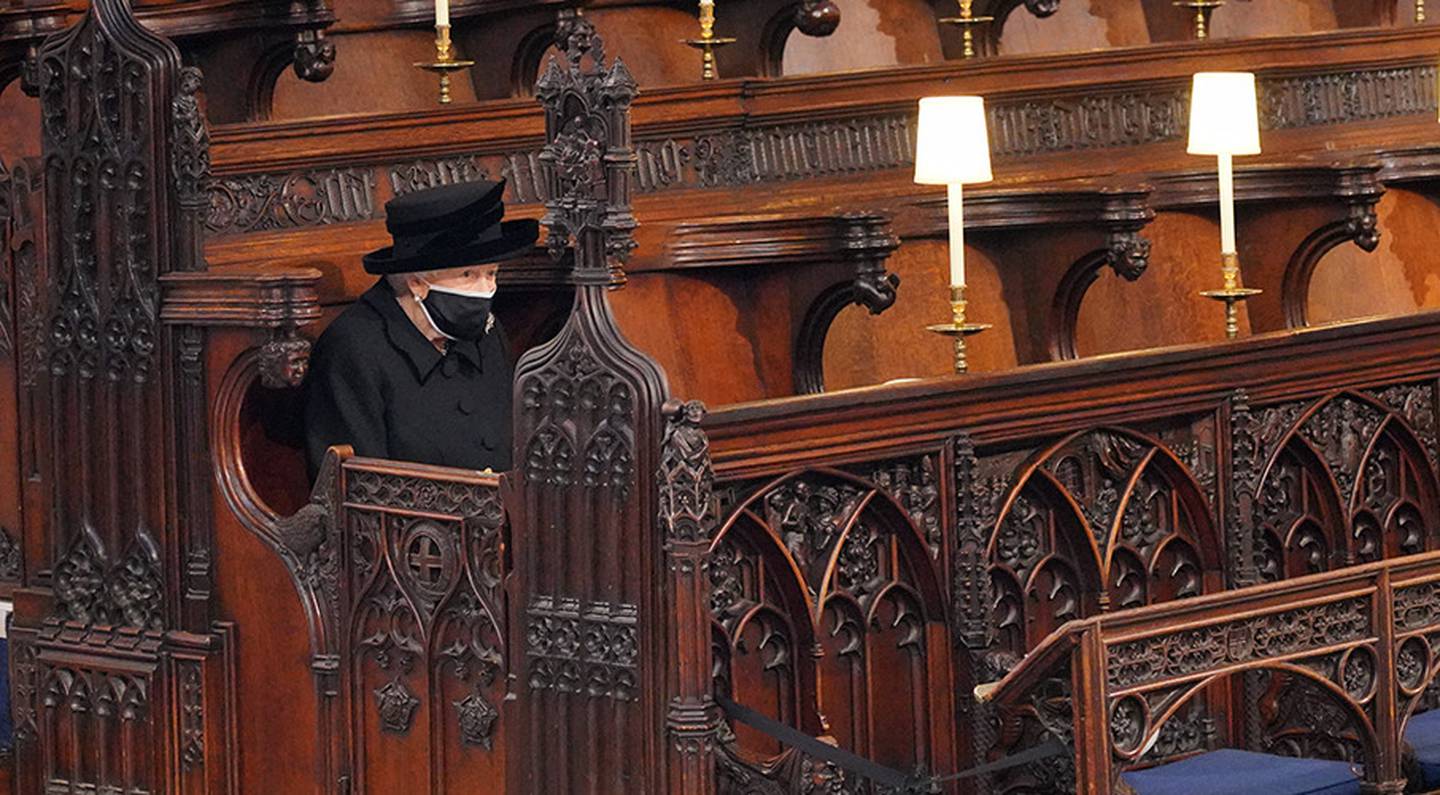 Queen Elizabeth II takes her seat during the funeral of Prince Philip, Duke of Edinburgh, at St George's Chapel at Windsor Castle on April 17, 2021 in Windsor, England. Photo / Getty

Inside the chapel, William and Harry were apart. William and Kate sat on one side of the chapel, opposite Harry, who was on the same side as the Queen, Prince Andrew, Princess Anne and her husband Vice Admiral Sir Tim Laurence.

It was the first time William and Harry have seen each other in more than a year and the brothers reportedly resolved to put aside their issues today to focus on mourning their grandfather.

As they left the chapel, Prince William and Prince Harry came together side-by-side for the very first time, speaking to the Archbishop of Canterbury.

Kate was seen speaking to her brother-in-law as the trio walked away together following the service. Harry and William then walked along together as the royals headed to the wake. 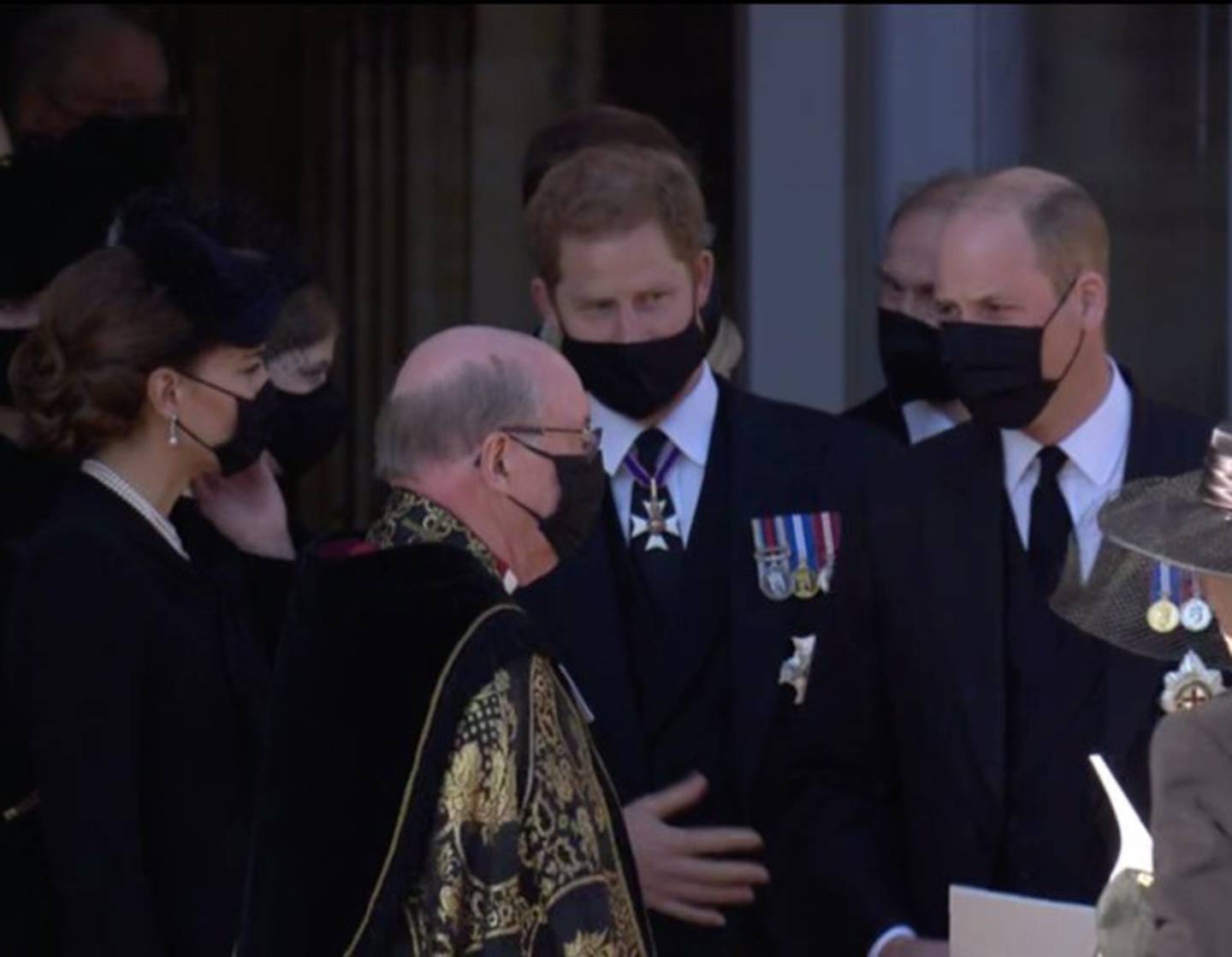 The brothers were seen standing side-by-side as they spoke to the Archbishop of Canterbury after Prince Philip's funeral. Photo / BBC

The Duke of Edinburgh's casket was covered in his personal standard and carried his sword, naval cap and a wreath of flowers as pallbearers lowered him on to his self-designed Land Rover hearse in the castle packed quadrangle packed with hundreds of armed personnel.

Prince Philip, 99, was remembered for his "kindness, humour and humanity" and his "unwavering loyalty" to the Queen.

There was no eulogy or sermon at the service and no members of the Royal family gave readings.

Instead, the deeply religious ceremony reflected The Duke of Edinburgh's desire to avoid unnecessary fuss, and focused on Royal Navy tradition and his love of the sea.

In keeping with Covid guidelines and tradition for a ceremonial royal funeral, the 50-minute service was conducted solely by the Dean of Windsor and the Archbishop of Canterbury.

Just 30 members of the royal family gathered to remember the Duke's life at 3pm local time (2am Sunday NZT).

"We are here today in St. George's Chapel to commit into the hands of God the soul of His servant Prince Philip, Duke of Edinburgh," said the Dean of Windsor.

"With grateful hearts we remember the many ways in which his long life has been a blessing to us. We have been inspired to his long loyalty, by his service to the nation and the Commonwealth, by his courage, fortitude and faith.

"Our lives have been enriched through the challenge that he set us, the encouragement that he has given us, his kindness, humour and humanity.

"We therefore pray that God will give us grace to follow his example and that, with our brother Philip, at the last, we shall know the joys of life eternal."

The Queen arrived at Windsor Castle as the national anthem played and the royal Bentley stopped next to her beloved husband's coffin, where she poignantly paused for a moment of reflection as cannons fired and bells tolled in remembrance of the duke.

Her Majesty was then driven to St George's Chapel with a lady in waiting, before being sat alone at the front of the church where she stood alone and bowed her head during the national minute's silence.

Following behind the coffin was the royal procession, led by Philip's children Prince Charles, Princess Anne, Prince Andrew and Prince Edward. The grandchildren, including Prince William and Prince Harry, followed. 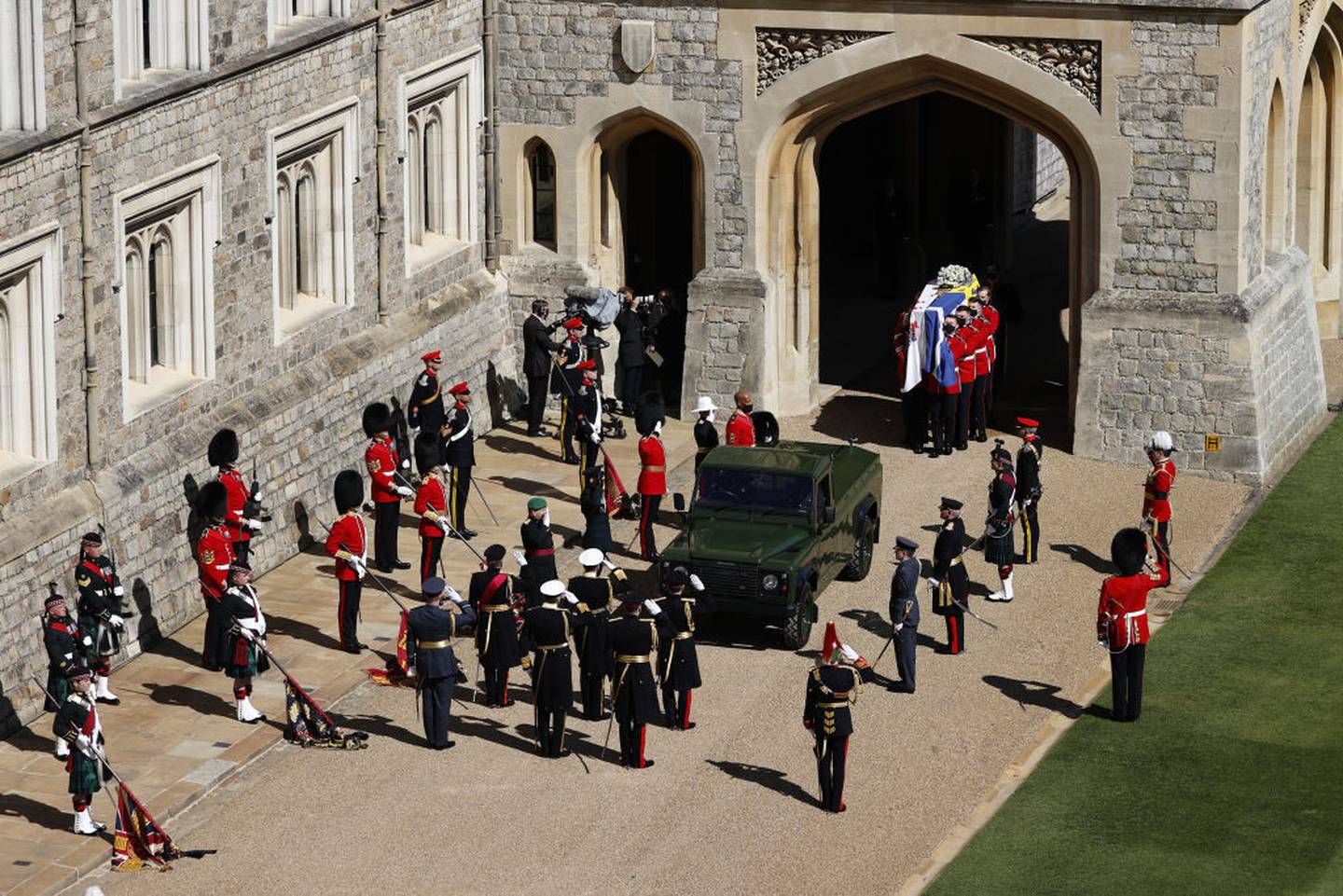 The Queen had decided that no royals should wear military uniform after Prince Andrew demanded to dress as an Admiral and Prince Harry was stripped of his titles. They were allowed to wear their medals, however.

Towards the end of the service, the Dean of Windsor commended the Duke, as his coffin was lowered into the Royal Vault.

The Buglers of the Royal Marines sounded the Last Post, in a nod to Prince Philip's military career, before Reveille was sounded by the State Trumpeters of the Household Cavalry.