A livestock ship sailing from Napier to China with two New Zealand crew members on-board is missing off the coast of Japan.

Japan's coast guard was on Thursday afternoon (NZ time) searching for Livestock carrier Gulf Livestock 1 carrying 42 crew members and 5800 cows that made a distress call off a southern Japanese island in seas roughened by a typhoon.

Japan's coastguard said it rescued one crew member, Sareno Edvarodo, a 45-year-old chief officer from the Philippines, while searching for the ship.

According to Edvarodo, the vessel lost an engine before it was hit by a wave and capsized, a coastguard spokeswoman said.

When the ship capsized, crew were instructed to put on lifejackets. Edvarodo said he jumped into the water and did not see any other crew before he was rescued.

Pictures provided by the coastguard showed a person in a lifejacket being hauled from choppy seas in darkness. 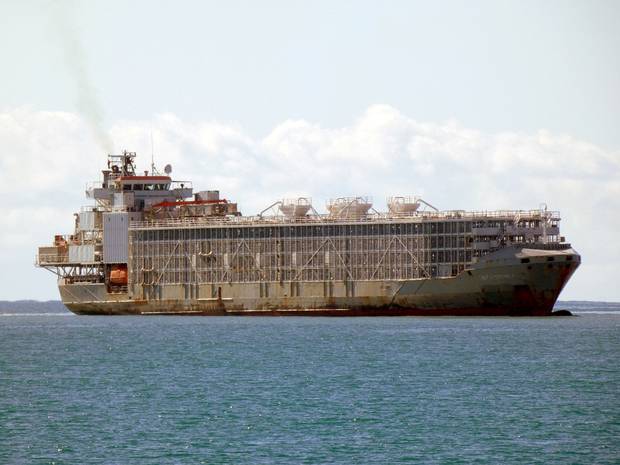 The Gulf Livestock 1 departed Napier on August 14 and is now reported to be missing. Photo / Tony des Landes

The ship sent a distress signal at 4.45am NZT yesterday in the East China Sea, an area being affected by Typhoon Maysak.

NHK World Japan reported that the Panamian registered cargo ship issued the distress signal at 1.40am Wednesday Japan time from a ship about 185km west of Amami Oshima in southwest Japan.

The ship departed Napier on August 14 carrying 5867 cows and reportedly 43 crew members including two people from New Zealand, 39 from the Philippines, one from Australia and one from Singapore.

The ship was on route to the Port of Jingtang in Tangshan, China, with an estimated journey of approximately 17 days.

It was expected to arrive in China on September 3.

NHK World reported that at shortly before 7pm Wednesday Japan time Japan's Defense Ministry said crew on a patrol plane spotted a lifeboat-like object in the waters near where the signal was sent and a person in a lifejacket nearby. 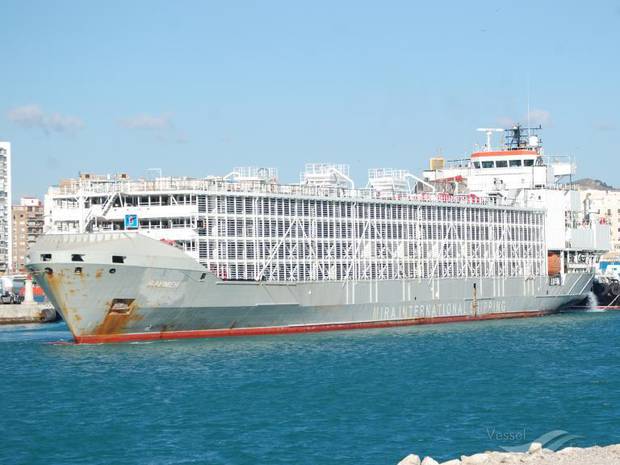 "I very much hope all the crew on board are safe. My thoughts are with their families, this will be a very difficult time for them as the search continues.

"Officials from MPI are working closely with the Ministry of Foreign Affairs and Trade and the exporter. I am awaiting an update on the situation."

Because it was an overseas incident, the Ministry for Foreign Affairs was the lead agency, a spokesperson said.

Safe Campaigns Manager Marianne Macdonald said it highlighted the risk of exporting live cattle. The cows are "likely all pregnant", she said.

However, the MPI spokeswoman confirmed that none of the livestock on board were pregnant.

"No MPI staff were on board the Gulf Livestock 1," she added.

A Ministry of Foreign Affairs and Trade spokeswoman said they are providing "consular assistance" to the families of two New Zealanders aboard.