Orderlies pushed Jertha Ylet's bed from the centre of the hospital ward to one side so Dr. Michelet Paurus could plug in his electric saw. She was silent as the doctor cut off her plaster cast in measured strokes.

Today she would have to leave the hospital, the doctor said.

Ylet had resisted until the cast came off. She'd been at Les Cayes' General Hospital since being brought there August 14, unconscious and with her leg crushed, after a 7.2-magnitude earthquake destroyed her house, killing her father and two other relatives and seriously injuring her brother. There is no home to return to.

A surgeon inserted a metal rod in her lower left leg on Thursday. Ylet, 25, had not been out of bed, much less tried to walk, since she arrived. Her 5-year-old daughter, Younaika, who was not injured, shared her bed and spent her days playing with other children around the ward.

More than a week after the earthquake on Haiti's southwestern peninsula killed at least 2207 people, injured 12,268 and destroyed nearly 53,000 houses, Ylet represents an emerging dilemma for the region's limited health care services: how to turn over hospital beds when discharged patients have nowhere to go.

"I said to the doctor, 'I don't have any place to go,'" Ylet said. "I told them everything. The doctor doesn't understand."

In the first days after the quake, the hospital was overwhelmed with patients. The injured lay on patios and breezeways awaiting care. Now there are still people in those areas, but they are discharged patients or people who were never admitted at all, who have been drawn by the donations of food, water and clothing that arrive at the hospital daily. 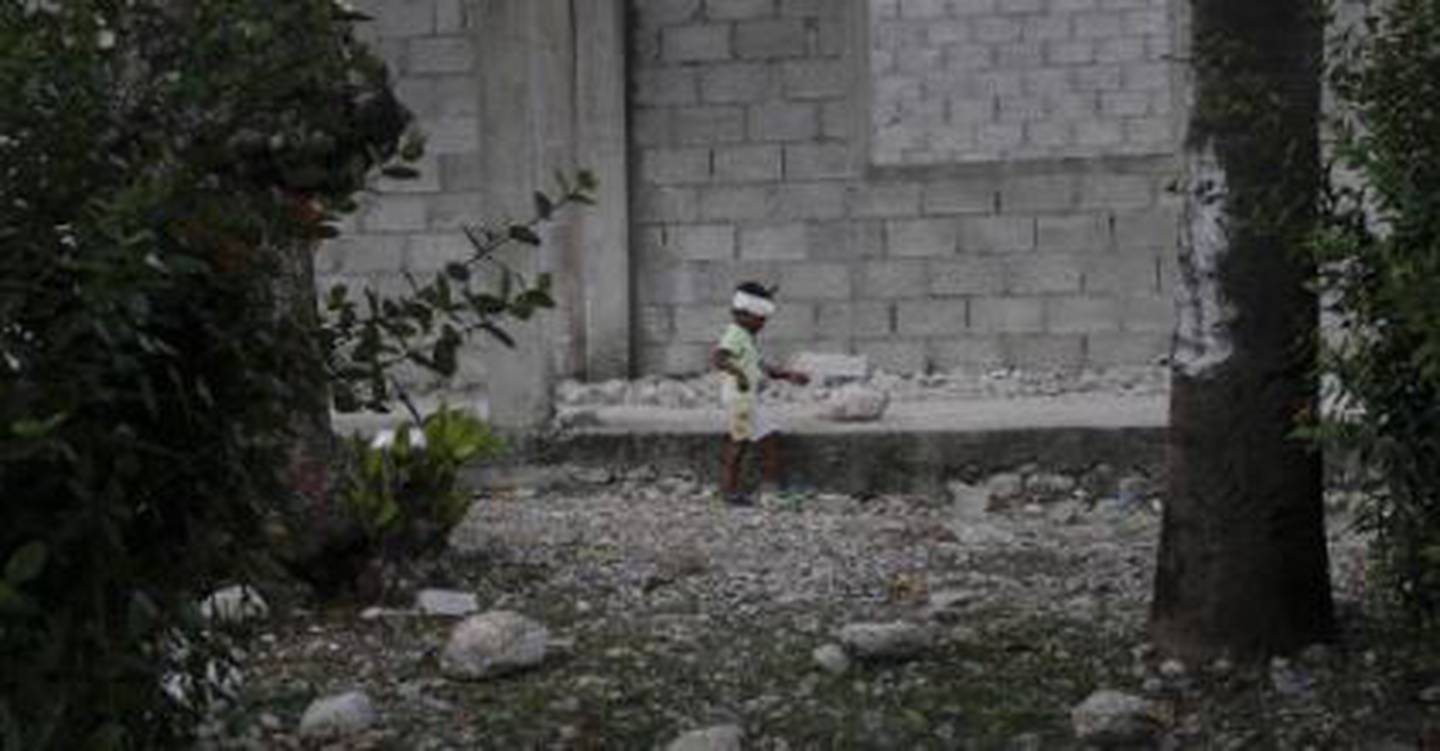 An injured boy walks through the yard of the Immaculée Conception hospital in Les Cayes, Haiti. Photo / AP

"We have a lot of patients who have been discharged, but are still hanging out in the yard," said hospital director Peterson Gede. "The fact they know they will receive food and water ... they don't have any intention to leave."

On Monday, Gede issued an order for hospital staff to begin to "motivate" patients to leave, "to make them understand that we need beds for new patient admissions."

It proved easier said than done. Not having a home to return to was a significant obstacle for Ylet and many others.

Ylet lost consciousness when a wall of her cinderblock house in Camp-Perrin fell on her as the quake struck.

Her boyfriend, Junior Milord, had left 20 minutes earlier for work. He froze in the street until the shaking stopped, then ran back to Ylet's house. He found her buried near the front of the building, which unlike the back, had not completely collapsed.

"I thought she was dead when I first started removing the blocks," Milord said.

He pulled her out and flagged down a passing car, which took her to the hospital in Les Cayes. "When I woke up I was in the hospital," she said.

Milord then returned to help dig out the bodies of Ylet's father, cousin and brother-in-law. Their bodies are still at a funeral home, because the family doesn't have the money to bury them. Milord lost his own home, plus two uncles, an aunt and a brother in the quake.

Milord said some of Ylet's surviving relatives are camping in her yard. If Ylet and her daughter have to leave, he said, they will end up there too.

Across the ward, nurse Gabrielle Lagrenade understands that reality as well as anyone. 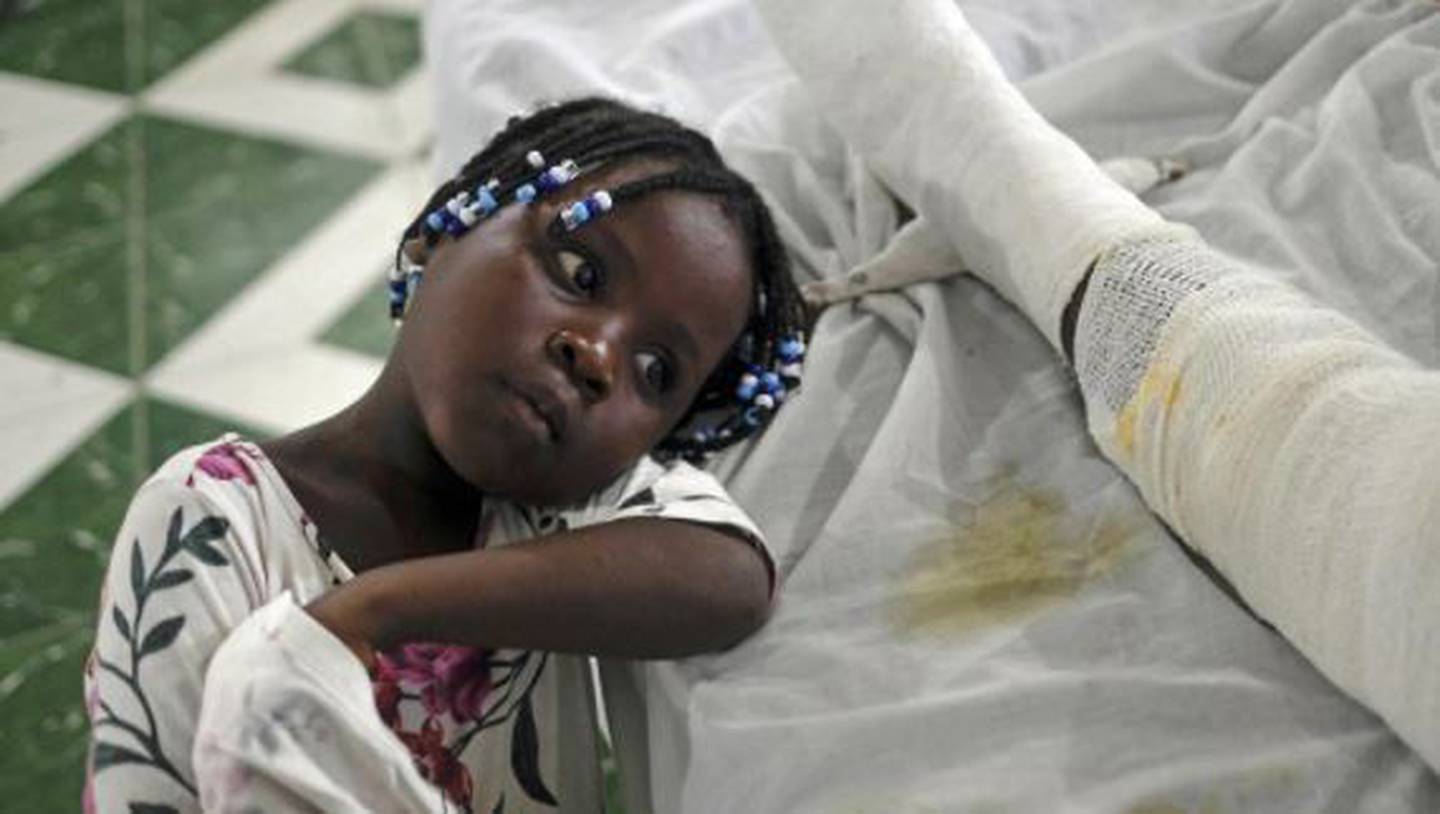 Younaika rests next to her mother Jertha Ylet, who was injured in the earthquake one week prior, at the Immaculate Conception Hospital, Haiti. Photo / CNN

Lagrenade and her 21-year-old daughter, Bethsabelle, have been sleeping outside since the quake hit. They struggle to sleep on the gravel roadside with their heads less than 6 feet from the highway. All night long mopeds, SUVs and tractor trailers rain dust and pebbles on them.

It's the only level ground around the two-story building where they'd rented an apartment above a small clothing store. The land drops precipitously from the road to a stream running behind the building, which was constructed on reinforced concrete columns above a drainage gully that feeds into the stream. Two columns now display gaping spaces between the bottom of the building and the top of the supports. The landlord has wisely decided to tear it down.

Despite her own precarious situation, Lagrenade, 52, continues to arrive daily for her shift at the hospital, carefully folding and stowing her bedding, discreetly slipping behind the row of roadside buildings to bathe and re-emerging in her spotless white nurse's smock to hail a motorcycle taxi for the ride to work.

Ylet is on her ward. About 22 beds spread across the room. Nurses and doctors wear masks, but patients do not, despite virtually no one in Haiti having been vaccinated for Covid-19. Nurses huddle around a wooden table at one end. Medical waste is tossed into a cardboard box in a corner.

Lagrenade is not unsympathetic to Ylet's plight and that of other newly homeless patients, but she is pragmatic.

The beds are needed, she said.

"After someone gets well they have to go," Lagrenade said.

This is what Paurus was trying to explain to Ylet.

An orthopaedic surgeon who came from Port-au-Prince to operate on her leg had cleared her to leave, the doctor said.

"If we decide to keep patients whose homes were destroyed there won't be room for [new] patients," he said. "We have a lot of patients and emergencies who need a bed."

Then Paurus got his saw.

After her cast was off, Ylet said she would give up her bed, but camp outside on the hospital grounds, because they told her to come back Thursday for a follow-up appointment.

But then some volunteers brought hot lunches. By the end of the day, Ylet was still in her bed. Milord said no one had come back to tell her to leave so there she was.

"The doctor needs to understand that I don't have a place to go and I am not leaving," Ylet said. "I will stay in the hospital's yard and sleep there until I am able to figure it out."