Nato envoys failed to reach a yesterday on whether to start membership talks with Finland and Sweden, diplomats said, as Turkey renewed its objections to the two Nordic countries joining.

The envoys met at Nato's headquarters in Brussels after Finland and Sweden's ambassadors submitted written applications to join the military organisation, in a move that marks one of the biggest geopolitical ramifications of Russia's war on Ukraine — and which could rewrite Europe's security map.

The diplomats, who did not want to be named because of the sensitive nature of the proceedings, declined to say who or what was holding up the process. They pointed to the messages from many of the 30 Nato allies welcoming Finland and Sweden's request.

Lithuanian Ambassador Deividas Matulionis told Swedish and Finnish media that the envoys had exchanged views about their national security. "The discussion was about that, but it is up to Turkey to comment," he said.

Nato officials also refused to provide details. They underlined remarks earlier by Secretary-General Jens Stoltenberg, that "we are determined to work through all issues and reach a rapid conclusion".

Meetings and diplomatic outreach aimed at resolving the problem will continue. US President Joe Biden voiced optimism on the matter Wednesday.

Turkey is the only ally to have clearly voiced its opposition — and although Croatia's president on Wednesday suggested his country could do the same to secure a tradeoff from Western powers, he's unlikely to derail the Croatian government's support for the Nordic pair's Nato accession.

Turkish President Recep Tayyip Erdogan insists Finland and Sweden must show more respect for Turkish sensitivities about terrorism. He is refusing to budge over what he says is their alleged support for Kurdish militants.

Erdogan accuses the two countries of turning a blind eye to activities of the banned Kurdistan Workers Party, or PKK, even though the group is on the European Union's anti-terror blacklist.

"You will not hand over terrorists to us, but you will ask us to allow you to join Nato. Nato is a security entity. Therefore, we cannot say 'yes' to depriving this security organisation of security," he said yesterday.

"We should follow Turkey's example," Milanovic said. "Turkey will sell its Nato status at a high price."

Before Croatia's lawmakers ratify the Nordic pair's Nato bid, Milanovic — a socialist — wants a change of neighbouring Bosnia's electoral law in favour of Bosnian Croats. But Plenkovic's conservative party enjoys a small majority over the socialists in parliament, and would likely carry the vote on Finland and Sweden's Nato bids.

The day had started off on an upbeat note in Brussels. Stoltenberg had said the military alliance stands ready to seize a historic moment and move quickly on allowing Finland and Sweden to join its ranks, after the two countries submitted their membership requests.

The official applications set a security clock ticking. Russia, whose war on Ukraine spurred them to join the alliance, has warned that it wouldn't welcome such a move, and could respond.

"I warmly welcome the requests by Finland and Sweden to join Nato. You are our closest partners," Stoltenberg said. "We all agree that we must stand together, and we all agree that this is a historic moment which we must seize."

"This is a good day at a critical moment for our security," a beaming Stoltenberg said, as he stood alongside the two envoys, with Nato, Finnish and Swedish flags at their backs.

Russian President Vladimir Putin has demanded that the alliance stop expanding towards Russia's borders, and several Nato allies, led by the United States and Britain, have signalled that they stand ready to provide security support to Finland and Sweden should the Kremlin try to provoke or destabilise them during the time it takes to become full members. 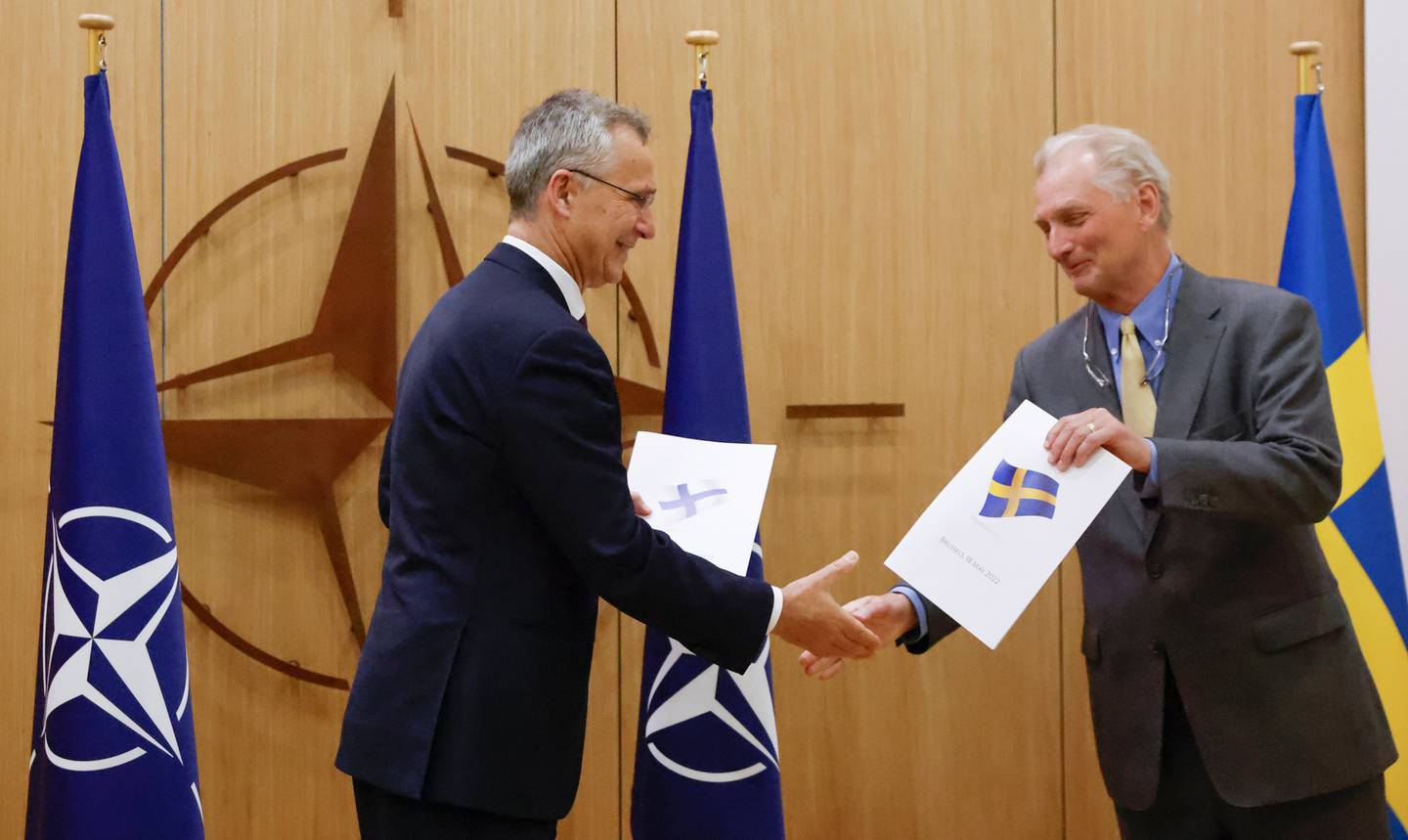 The countries will only benefit from Nato's Article 5 security guarantee — which pledges that any attack on one member would be considered an attack of them all — once the membership ratification process is concluded, probably in a few months.

A senior US defence official said the Pentagon is having ongoing discussions with Sweden and Finland on their security needs to deter Russia as they move towards Nato membership.

White House national security adviser Jake Sullivan said Wednesday that the US and European allies are "prepared to send a very clear message ... that we will not tolerate any aggression against Finland or Sweden" until Nato's Article 5 kicks in for them.

Sullivan also said Biden asked his national security team and Cabinet principals about the risks and benefits of Finland and Sweden joining Nato, and they "unanimously" supported backing the move as both countries are "highly capable security partners".

British Prime Minister Boris Johnson welcomed the Nordic applications in a tweet and said that "Putin's appalling ambitions have transformed the geopolitical contours of our continent". Germany, Italy, the Baltic states and the Czech Republic all spoke favourably about the candidates.

The membership process usually takes eight to 12 months, but Nato wants to move quickly given the threat from Russia hanging over the Nordic countries' heads.

Public opinion in Finland and Sweden has shifted massively in favour of membership since Russia invaded Ukraine on February 24.

Finland and Sweden cooperate closely with Nato. They have functioning democracies, well-funded armed forces and contribute to the alliance's military operations and air policing.