ON AIR: The Weekend Collective

Wildfires and plumes of smoke from the Amazon rainforest can been seen from space in the latest set of satellite images captured by US space agency Nasa.

More than 75,000 fires have erupted since the start of the year — an 83 per cent increase on last year and the highest since records began in 2013.

The latest fires have been burning for three weeks now, prompting anti-government protests and international furore.

Nasa's images show the increase in smoke and fire activity as flames break out in Rondonia, Mato Grosso and Amazonas.

More than half of the fires are in the massive Amazon Basin, where more that 20 million people live.

Some 1663 new fires were ignited between Thursday and Friday, according to Brazil's National Institute for Space Research.

Environmental organisations and researchers say the blazes were most likely set by humans who wanted to clear and use the land for business purposes.

Amazon Watch, a non-profit organisation that works to protect the rainforest, said farmers had been setting the forest ablaze to create pastures, emboldened by Brazil's conservative pro-business government.

"The unprecedented fires ravaging the Amazon are an international tragedy and a dangerous contribution to climate chaos," Christian Poirier said, the organisation's programme director.

He said the flames were "directly related" to Brazil's President Jair Bolsonaro, a climate sceptic who in the past has been criticised for claiming that environmental protections hinder the South American country's economic growth.

This time series ⬇️ shows CO high in the atmosphere over Brazil from Aug. 8-22, 2019. Each "day" in the series is made by averaging three day's-worth of data: https://t.co/binaSKsGcm pic.twitter.com/tcg2W311Pm

"The vast majority of these fires are human-lit," he said.

He said farmers and ranches had long used fire to clear land, which was the most likely cause of the unusually large number of fires burning in the rainforest.

Backed by military aircraft, Brazilian troops on Saturday were deploying in the Amazon.

Even so, the fires were likely to be urgently discussed at a summit of the Group of Seven leaders in France this weekend.

Some 44,000 troops will be available for "unprecedented" operations to put out the fires, and forces are heading to six Brazilian states that asked for federal help, Defence Minister Fernando Azevedo said.

So far in 2019, the region is experiencing more fires, with more intense burns, than in recent years. pic.twitter.com/PhqRBMjfsu

The military's first mission will be carried out by 700 troops around Porto Velho, capital of Rondonia, Mr Azevedo said.

The military will use two C-130 Hercules aircraft capable of dumping up to 12,000 litres of water on fires, he said.

On Friday, the reporter saw many already deforested areas that were burned, apparently by people clearing farmland, as well as a large column of smoke billowing from one fire.

The municipality of Nova Santa Helena in Brazil's Mato Grosso state was also hard-hit. Trucks were seen driving along a highway Friday as fires blazed and embers smouldered in adjacent fields.

The Brazilian military operations came after widespread criticism of Bolsonaro's handling of the crisis. 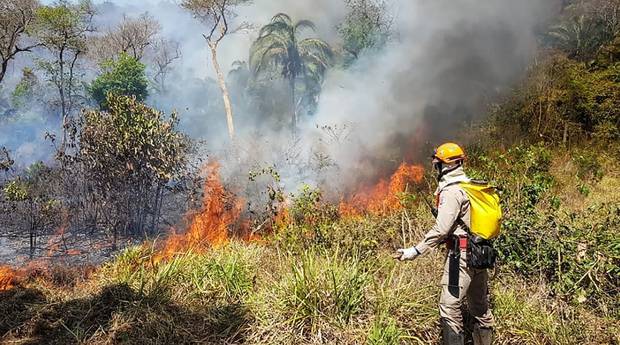 Despite international concern, Bolsonaro told reporters on Saturday that the situation was returning to normal.

He said he was "speaking to everyone" about the problem, including US President Donald Trump, Spanish Prime Minister Pedro Sanchez and several Latin American leaders.

Bolsonaro, who has previously described rainforest protections as an obstacle to Brazil's economic development, sparred with critics who warn the Amazon absorbs vast amounts of greenhouse gases and is crucial for efforts to contain climate change.

The Amazon fires have become a global issue, escalating tensions between Brazil and European countries who believe Bolsonaro has neglected commitments to protect biodiversity.

The Amazon is often referred to as the planet's lungs, producing 20 per cent of the oxygen in the Earth's atmosphere.

As the largest rainforest on the planet, it is considered a vital instrument in slowing global warming.

According to the National Institute for Space Research, more than one-and-a-half soccer fields' worth of Amazon rainforest are being destroyed every minute.

ON AIR: The Weekend Collective