The lone survivor of a team of Islamic State extremists has been convicted of murder and other charges and sentenced to life in prison without parole in the 2015 bombings and shootings across Paris that killed 130 people in the deadliest peacetime attacks in French history.

The special court also convicted 19 other men involved in the assault following a nine-month trial.

Chief suspect Salah Abdeslam was found guilty of murder and attempted murder in relation to a terrorist enterprise. The court found that his explosives vest malfunctioned, dismissing his argument that he ditched the vest because he decided not to follow through with his part of the attack on the night of November 13, 2015.

The killings at the Bataclan concert hall, cafes and the national stadium led to intensified French military action against extremists abroad and a security crackdown at home.

Abdeslam, a 32-year-old Belgian with Moroccan roots, was given France's most severe sentence possible. The sentence of life without parole has only been pronounced four times in the country - for crimes related to rape and murder of minors. The historic trial in Paris of 20 men suspected of critical roles in the Islamic State massacres that killed 130 people in 2015 has ended this week. Photo / AP

Of the defendants besides Abdeslam, 18 were given various terrorism-related convictions, and one was convicted on a lesser fraud charge. They were given punishments ranging from suspended sentences to life in prison.

Arthur Denouveaux, who survived the Bataclan massacre, appeared tired but relieved the trial was over.

"I hope to be able to put the word 'victim' into the past," he said.

"When things like this happen you have no repair possible. That's why you have justice," he said, even if "justice can't do everything".

He added: "It puts an exclamation point at the end of it."

During the trial, Abdeslam wept, apologised to victims and pleaded with judges to forgive his "mistakes".

For victims' families and survivors of the attacks, the trial has been excruciating yet crucial in their quest for justice and closure.

For months, the packed main chamber and 12 overflow rooms in the 13th-century Justice Palace heard the harrowing accounts of the victims, along with testimony from Abdeslam. The other defendants are largely accused of helping with logistics or transportation. At least one is accused of a direct role in the deadly March 2016 attacks in Brussels, which also was claimed by the Islamic State group.

The trial was an opportunity for survivors and those mourning loved ones to recount the deeply personal horrors inflicted that night and to listen to details of countless acts of bravery, humanity and compassion among strangers. Some hoped for justice, but most just wanted to tell the accused directly that they have been left irreparably scarred, but not broken. 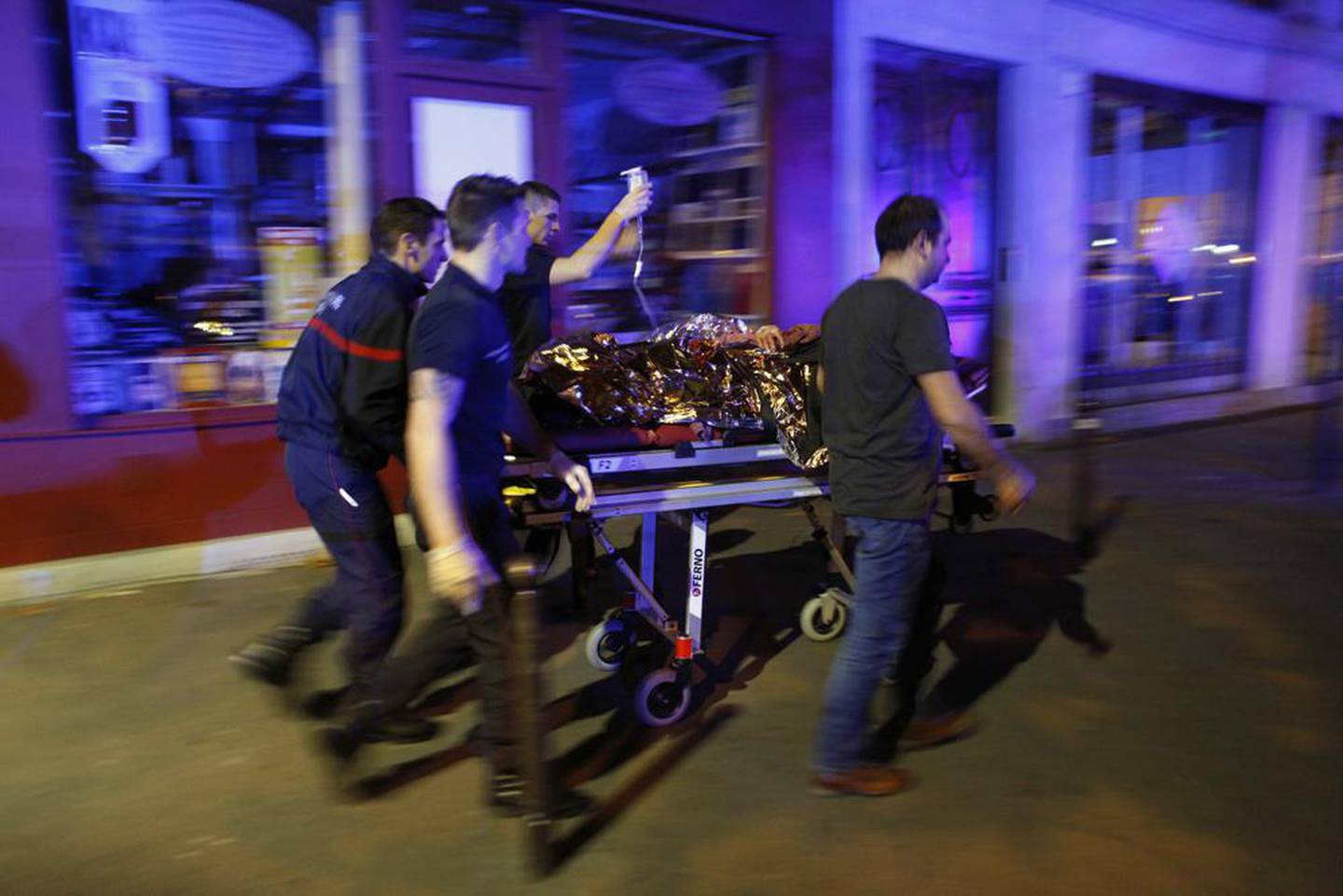 A person is evacuated after a shooting, outside the Bataclan theater in Paris, Nov. 14, 2015. Photo / AP

"The assassins, these terrorists, thought they were firing into the crowd, into a mass of people," said Dominique Kielemoes at the start of the trial in September 2021. Her son bled to death in one of the cafes. Hearing the testimony of victims was "crucial to both their own healing and that of the nation", Kielemoes said.

"It wasn't a mass - these were individuals who had a life, who loved, had hopes and expectations," she said.

France was changed in the wake of the attacks: Authorities declared a state of emergency and armed officers now constantly patrol public spaces. The violence sparked soul-searching among the French and Europeans, since most of the attackers were born and raised in France or Belgium. And they transformed forever the lives of all those who suffered losses or bore witness.

Presiding judge Jean-Louis Peries said at the trial's outset that it belongs to "international and national events of this century.

France emerged from the state of emergency in 2017, after incorporating many of the harshest measures into law. 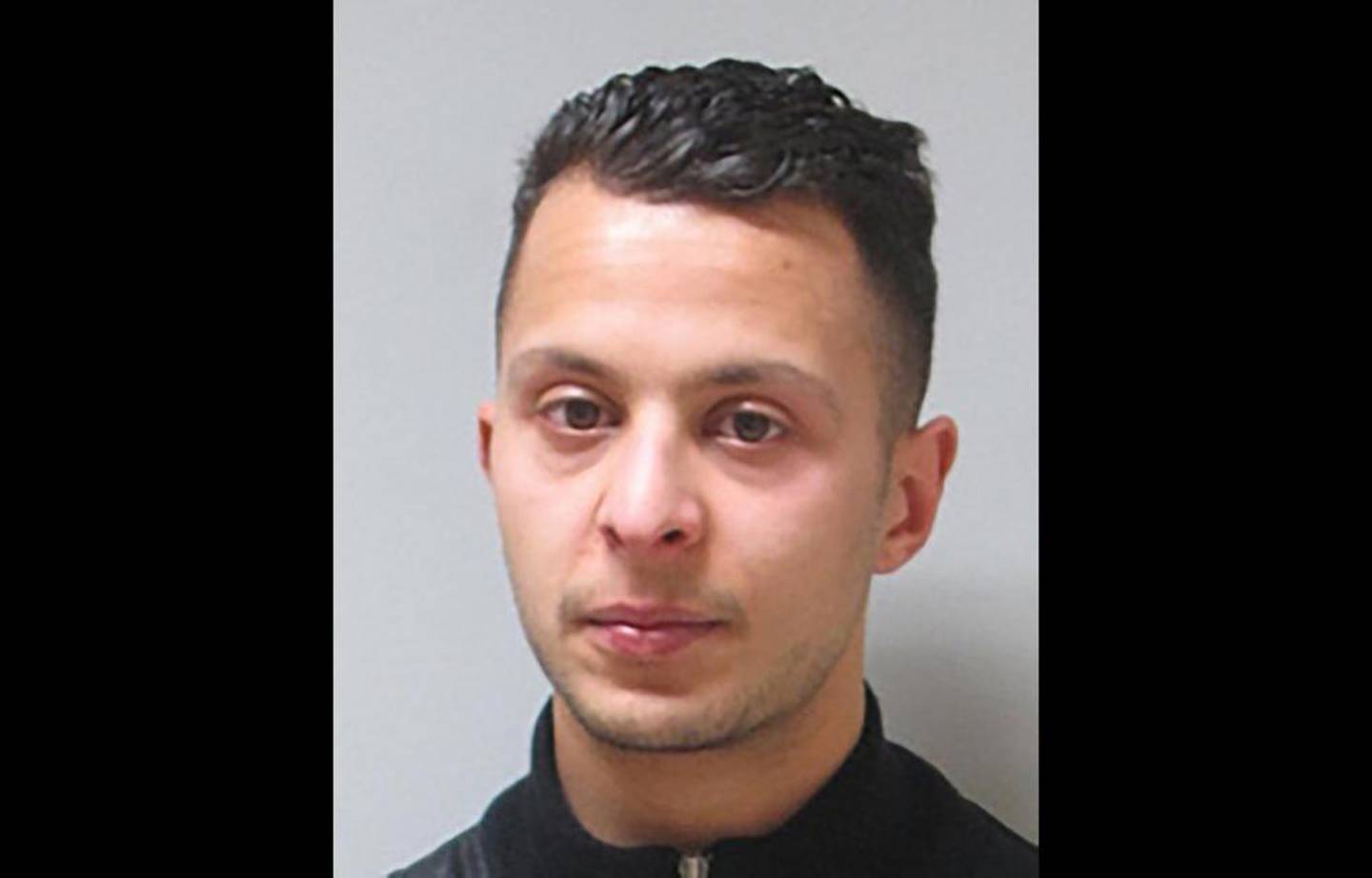 Salah Abdeslam was found guilty of murder and attempted murder in relation to a terrorist enterprise. Photo / AP

Fourteen of the defendants were in court, including Abdeslam. All but one of the six men tried in absentia are presumed killed in Syria or Iraq; the other is in prison in Turkey.

Most of the suspects were accused of helping create false identities, transporting the attackers back to Europe from Syria or providing them with money, phones, explosives or weapons. Abdeslam was the only defendant tried on several counts of murder and kidnapping as a member of a terrorist organisation.

"Not everyone is a jihadi, but all of those you are judging accepted to take part in a terrorist group, either by conviction, cowardliness or greed," prosecutor Nicolas Braconnay told the court in closing arguments this month.

Some defendants, including Abdeslam, said innocent civilians were targeted because of France's policies in the Middle East and hundreds of civilian deaths in Western airstrikes in Islamic State-controlled areas of Syria and Iraq.

During his testimony, former President François Hollande dismissed claims that his government was at fault.

The Islamic State, "this pseudo-state, declared war with the weapons of war", Hollande said. The Paris attackers did not terrorise, shoot, kill, maim and traumatise civilians because of religion, he said, adding it was "fanaticism and barbarism".

During closing arguments, Abdelslam's lawyer Olivia Ronen told a panel of judges that her client is the only one in the group of attackers who didn't set off explosives to kill others that night. He can't be convicted for murder, she argued.

"If a life sentence without hope for ever experiencing freedom again is pronounced, I fear we have lost a sense of proportion," Ronan said. She emphasised through the trial that she is "not providing legitimacy to the attacks" by defending her client in court. A woman pays respect to the victims, outside the Bataclan concert hall. Photo / AP

Abdeslam apologised to the victims at his final court appearance, saying his remorse and sorrow is heartfelt and sincere. Listening to victims' accounts of "so much suffering" changed him, he said.

"I have made mistakes, it's true, but I am not a murderer, I am not a killer," he said.