The nation that has declared it will "live with Covid-19" has ramped up coronavirus restrictions just days after easing them.

A sudden spike in virus cases in Singapore – infections have gone from eight to almost 200 in 10 days – has rattled the government which only on Monday had allowed larger groups of people to gather together.

Finance Minister Lawrence Wong said the Covid-19 "situation has taken a sharp turn for the worse", while trade Minister Gan Kim Young added the implementation of restrictions "feels like a huge setback" for the city state.

On Tuesday, 182 new local infections were recorded following an outbreak at a fish market.

Nevertheless, the government still intends to significantly do away with social distancing measures in the coming months.

In June, the southeast Asian nation of almost six million unveiled a strategy that would be a "new normal" to "live with Covid".

"We can't eradicate it, but we can turn the pandemic into something much less threatening, like influenza or chickenpox, and get on with our lives," wrote ministers Wong and Gan and health Minister Ong Ye Kung in an editorial in the Straits Times.

Essentially, a level of circulation of the virus would be tolerated due to the protection offered by vaccines.

Large gatherings would be allowed and international borders would steadily reopen.

A big change would be to no longer report daily case numbers.

"Instead we will focus on the outcomes: how many fall very sick, how many in the intensive care unit, how many need to be intubated for oxygen, and so on," said the trio of politicians who make up the nation's Covid-19 multi-ministry task force.

The plan is considered to be one of the most comprehensive produced by a country on how to manage coronavirus post vaccination.

But it's not as extreme as the UK which has removed most social distancing measures altogether with the hope that vaccinations will lead to far fewer deaths and hospitalisations even as case numbers soar. 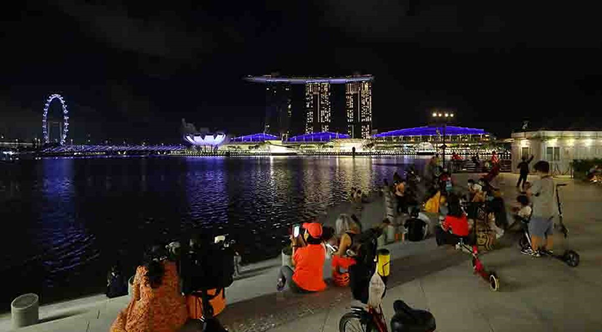 The nation of Singapore that has declared it will "live with Covid-19" has ramped up coronavirus restrictions just days after easing them. Photo / Getty

Confidence had been rising in Singapore before the "live with Covid" plan kicked in with just a steady undercurrent of 20 cases a day for the past nine months.

So much so, that two weeks ago the government announced a scaling back of restrictions.

From Monday this week, fully jabbed locals have been allowed to dine with in restaurants in groups of five or more – that was up from two previously.

It's a relaxation that has not lasted long.

Starting on Thursday, no one will be allowed to eat within restaurants with takeaway and delivery the only options, while social gatherings have gone from five back to two.

Close contact activities such as saunas and nail salons will be closed and it's a no-no to singing and even the playing of wind instruments because they require the expulsion of air.

"The Covid situation has taken a sharp turn for the worse," said Wong in a Facebook post on Tuesday announcing the new restrictions.

"The current trajectory of infection means that cases will likely rise sharply and many more people will potentially catch the virus."

Almost as soon as Singapore announced a rolling back of some restrictions, virus cases began to rise.

The majority of those cases have been linked to the Jurong Fishery Port, a large and busy seafood market. It has now been shut down.

Authorities have speculated the virus may have been transported to Singapore on fishing boats from Indonesia, just over the Malacca Straits, where there has been a countrywide outbreak.

A number of cases have also been traced back to karaoke lounges. The nation that has declared it will "live with Covid-19" has ramped up coronavirus restrictions just days after easing them. Photo / Getty

'Huge setback' but plan on track

"I know today's announcement feels like a huge setback to many," Gan added, according to a report in the Straits Times.

"Once we have slowed down the new clusters and hit higher vaccination rates, we would be able to continue with our reopening journey."

And that was a key message from the ministerial trio. That while this was a bump on the road, Singapore was still intending to change tack on managing Covid-19.

"When we outlined our plans to live with Covid-19, we also emphasised that we needed to significantly raise our vaccination, and meanwhile we still need to keep infection under control to protect the unvaccinated," Gan said.

The government has flagged that it would be comfortable with up to 200 cases a day under the plan.

Data coming out of Britain and Israel, two of the world's most vaccinated nations, has shown that while cases can still rise deaths are one tenth of what they were before vaccination.

"We are so close, weeks away, to a stage where we have two-thirds or more of our population fully vaccinated," said Ong.

"Then we will be able to much more decisively transit to a Covid-19-resilient posture.

"Now is not the time to risk it all. So we need to bite this bullet, dial back on social activities, and use this time to push through the vaccination efforts."