Residents of a Pennsylvania county have been warned not to approach a monkey missing after a crash involving a pickup that was towing a trailer taking about 100 of the animals to a lab.

State troopers have urged people not to look for or capture the cynomolgus macaque monkey after the Friday afternoon (local time) crash on a state highway near an Interstate 80 exit in Montour County.

"Anyone who sees or locates the monkey is asked not to approach, attempt to catch, or come in contact with the monkey. Please call 911 immediately," troopers tweeted, not elaborating on any specific dangers the monkey posed.

Several monkeys escaped after the collision between the pickup and a dump truck, but as of Saturday morning only one remained unaccounted for, officials said. The Pennsylvania Game Commission and other agencies searched for it amid frigid weather.

The US Centres for Disease Control and Prevention said the agency was providing "technical assistance" to state police. The shipment of monkeys was en route to a CDC-approved quarantine facility after arriving on Friday morning at New York's Kennedy Airport from Mauritius, the agency said.

The truck had been on its way to a lab, Trooper Andrea Pelachick told The Daily Item newspaper of Sunbury.

The location of the lab and the type of research for which the monkeys were destined weren't clear, but cynomolgus monkeys are often used in medical studies. A 2015 paper posted on the website of the National Centre for Biotechnology Information referred to them as the most widely used primate in preclinical toxicology studies. 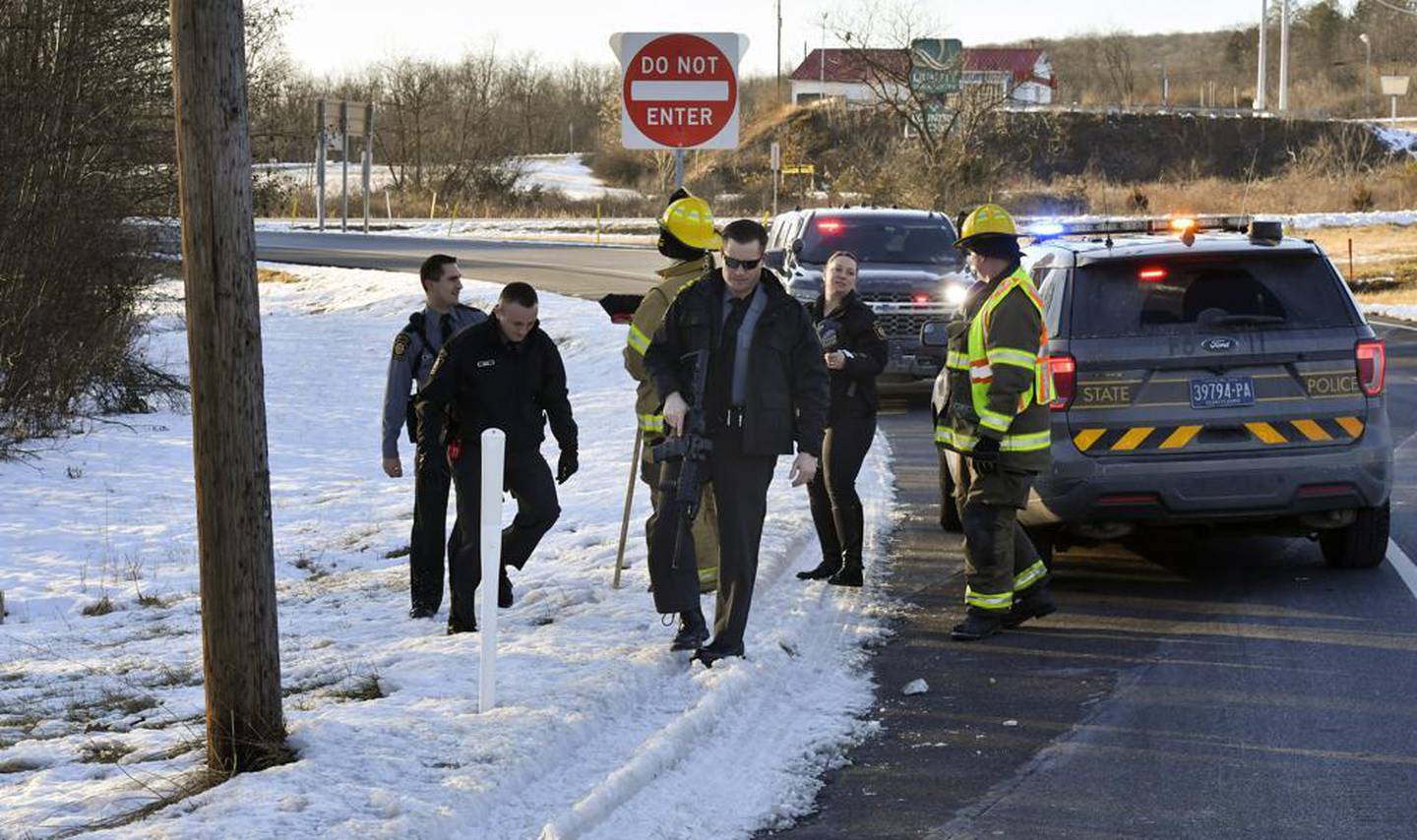 Game Commission Officers pull up as Pennsylvania State Troopers prepare to look for several monkeys which escaped from their crates. Photo / AP

Trooper Laura Lesher said state police secured the scene for the Pennsylvania Department of Health and the US Centres for Disease Control and Prevention.

The condition and whereabouts of the remaining monkeys weren't clear on Saturday.

The condition of the motorists also wasn't clear, nor was it clear whether any citations were issued.

A crash witness, Michelle Fallon, told the Press Enterprise newspaper of Bloomsburg that she spoke with the pickup driver and a passenger after the crash. The driver appeared to be disoriented, and the passenger thought he might have injured his legs, she said.

Crates littered the road on Friday as troopers searched for monkeys, rifles in hand. Valley Township firefighters used thermal imaging to try to locate the animals, and a helicopter also assisted, the Press Enterprise newspaper of Bloomsburg reported.

The pickup was heading west on I-80 when it got off at the Danville exit and then immediately tried to get back on, driving across the other lane, the newspaper reported.

Fallon told the Press Enterprise she was behind the pickup when it was hit on the passenger side by the dump truck, tearing off the front panel of the trailer and sending more than a dozen crates tumbling out.

She and another motorist who stopped to help were standing near the scene when the other driver said he thought he saw a cat run across the road, Fallon said.

Fallon peeked into a crate and saw a small monkey looking back at her, she told the newspaper.

"They're monkeys," she told the other motorist.