Kmart has pulled a children's bride costume from its shelves after a Melbourne mum launched a petition calling the costume "beyond inappropriate".

The $6 costume, which included a white wedding gown and headband with veil for children between the ages of 4 and 6, was stripped from sale on Tuesday afternoon just two days after Shannon B launched the petition on Change.org.

"It was not intended to cause offence and we sincerely apologise. We have made the decision to withdraw this product." 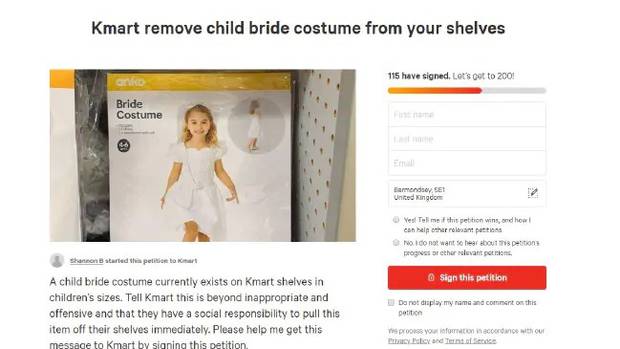 The petition was posted on Change.org two days ago. Photo / Change.org

The petition, which had just 124 signatures, had labelled the costume "offensive" and asked supporters to remind Kmart it had a "social responsibility" to uphold.

"Each year, 12 million children (girls as young as 6 years old — the same size as this 'costume') are sold or married off by their family without their consent. That's one million child marriages per month!" Shannon wrote.

"That equates to 23 children every minute or 1 child every 2 minutes. If this continues, 150 million more children will be married by the year 2030.

"Tell Kmart this is beyond inappropriate and offensive and that they have a social responsibility to pull this item off their shelves immediately."

Every year, 12 million girls are married before the age of 18, which works out to one every 23 minutes.#WorldVision Australia's child rights advocate @MercyJumo said "anything that trivialises child marriage is disturbing" @rickgoodman13 @7NewsMelbourne https://t.co/dJsGhBM5nS

The decision comes just a week before Halloween, where children's costumes will fly off department store racks.

"You know what I love. Halloween. I love the holiday a lot. You know what I don't love … this. I'm very confused to why Kmart thought being a bride is a costume little girls should dress up as. Not only that, there (was) no groom one. This is just weird onto push little girls," one person wrote on Twitter.

At this stage, the costume is still available on the Kmart New Zealand website.