"It was like looking into the gates of Hades" — that's how a Northland woman describes the 25-metre-high flames advancing towards her home on the fire-ravaged New South Wales coast.

Now Bonnie Callagher, who has seen the fires approach and recede twice in the past two weeks, is bracing herself for today's forecast of "catastrophic" fire danger.

Three people have died in the Australian state and at least 150 homes have been destroyed since Friday, but the worst is expected today when high temperatures, strong winds and low humidity combine. View from the holiday park at the height of the blaze. Photo / BIG4 Colonial Holiday Park

Callagher is well-known in Kerikeri as the former manager of High Voltage surfwear store, but for the past year and a half she and her husband have been running BIG4 Colonial Holiday Park in Harrington, New South Wales.

Her parents are Hugh, a carver and one-time Far North mayoral candidate, and Debbie McKechnie.

The drama started just over two weeks ago when a fire broke out in Crowdy Bay National Park, directly across the road from the holiday park and the couple's home.

There was no cause for alarm at first and, besides, emergency services were occupied with bigger fires further south.

Callagher kept a wary eye on the blaze which was still subdued when she went to bed on October 28. When she was woken up by police shortly after 10pm, however, the trees across the road were silhouetted by a red glow.

The couple swung their emergency plan into action and made sure all 190 people in the park — including many permanent residents in homes for over-55s — were awake, aware of the situation and ready to go. 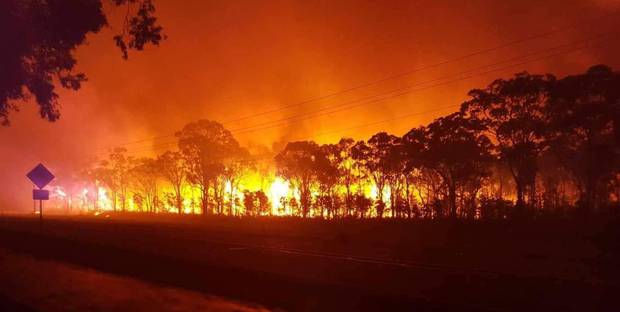 The holiday park was evacuated when flames reached the trees on the other side of the road. Photo / BIG4 Colonial Holiday Park

Soon the trees directly across the road were on fire. The road was teeming with police and firefighters.

"The trees there are about 25m tall and the flames were higher than that. It was like looking into the gates of Hades — a huge wall of fire coming directly towards you, but also embers raining down on you from above and setting fire to the grass so the fire's coming at you from all directions. The smoke burns your eyes and you can't breathe," Callagher said.

"It was absolutely terrifying. As Kiwis the whole bushfire thing is new to us."

Callagher ran back and forth between the camp office and their home, which she sprayed with a garden hose, until everyone was ordered to evacuate to Taree, a town about 25 minutes away, at 11pm.

About 1am the fire retreated back into national park and they were allowed to return, but that wasn't the end of it.

Since Thursday the area had been buffeted by intense, hot winds — ''like having a hair dryer on your face'' — and the fire had started approaching again, this time from the other direction.

"Basically the whole coast is on fire," she said.

The highway, which had been closed to the north and south, re-opened yesterday but they had to stay alert to ever-changing weather conditions.

Callagher said she didn't feel immediately threatened this time because fire had already swept through once, consuming much of what could be burnt.

However, she was bracing herself for today's forecast catastrophic fire danger. The tourists had left but she was keeping the holiday park's 160 permanent residents informed.

Callagher said she was grateful to be in a much better position than many.

"So many people have lost their homes. A couple arrived yesterday looking for a place to stay with only their dog and whatever they managed to get in their car before their home was destroyed," she said.

"It'll be a while before any of us can breathe clearly and sleep well."