Veteran Al Jazeera journalist Shireen Abu Akleh, one of the satellite channel's best-known reporters, was shot and killed on Wednesday (local time) while covering an Israeli military raid in the occupied West Bank. The broadcaster and two reporters who were with her blamed Israeli forces.

The Israeli army initially suggested that Abu Akleh might have been killed by stray fire from Palestinian militants. But the military chief, Lt. Gen. Aviv Kohavi, later stepped back from that assertion, saying it was unclear who had fired the deadly bullet.

Abu Akleh's death could draw new scrutiny of Israel's military justice system, which is being examined as part of a war crimes probe conducted by the International Criminal Court. It also threatened to further strain often rocky relations between the army and the international media.

Abu Akleh, 51, was a respected and familiar face in the Middle East, known for her coverage on Al Jazeera Arabic of the harsh realities of Israel's open-ended military occupation of the Palestinians, now in its 55th year. She was widely recognised in the West Bank and was also a US citizen.

Her death reverberated across the region. Arab governments condemned the killing.

There was also an outpouring of grief in the West Bank. In Ramallah, the seat of the Palestinian autonomy government, Abu Akleh's body, draped in a Palestinian flag and covered by a wreath of flowers, was carried through downtown streets. Hundreds chanted, "with our spirit, with our blood, we will redeem you, Shireen". 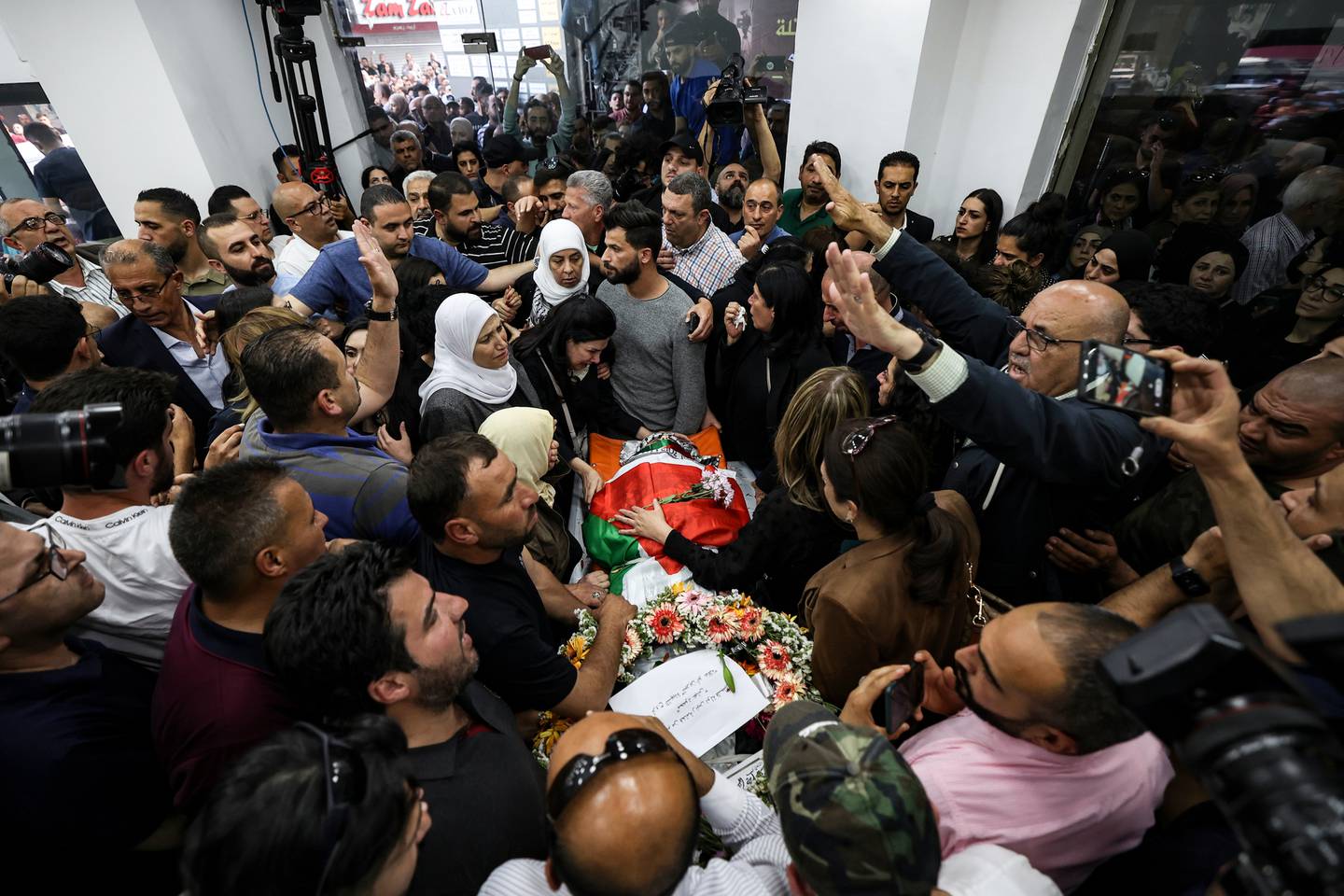 Colleagues and friends react as the Palestinian flag-draped body of veteran Al-Jazeera journalist Shireen Abu Akleh is brought to the news channel's office in the West Bank. Photo / AP

On Thursday, a procession was to take the body for burial in Jerusalem, where Abu Akleh was born.

In east Jerusalem, dozens of mourners gathered at the family home to honor her. Lina Abu Akleh, her niece, called her "my best friend, my second mum, my companion".

"I never thought this day would come, where the news would be about her and she won't be the one covering the news," she said.

At one point, a group of Israeli police entered the home, where they were immediately met with shouts of "killers" and "occupiers" and chants to "get out." It was not immediately clear why the police came, and the officers quickly left.

Palestinians gathered outside the family's house on Wednesday evening, some holding Palestinian flags and posters with Shireen Abu Akleh's photo. When the group walked toward a main thoroughfare, Israeli police tried to stop them. Scuffles ensured. Five Palestinians were hurt and about half a dozen were detained. 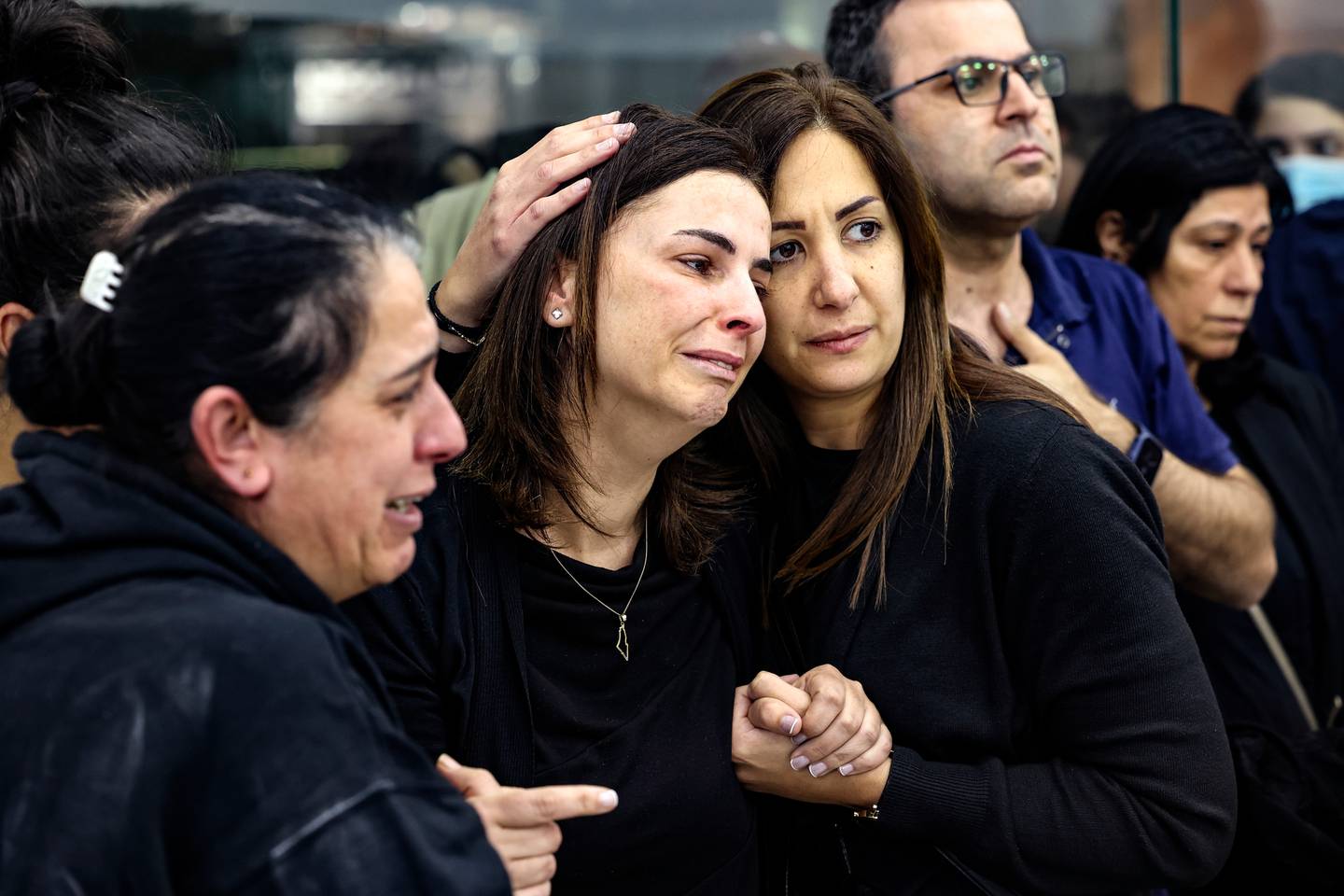 Colleagues and friends react as the Palestinian flag-draped body of veteran Al-Jazeera journalist Shireen Abu Akleh is brought to the offices of the news channel's office in the West Bank. Photo / AP

Abu Akleh was killed on the outskirts of the Jenin refugee camp in the northern West Bank, known as a bastion of militants. Israel has conducted near-daily raids in Jenin in recent weeks following a series of deadly attacks inside Israel carried out by militants from the area.

Kohavi, the Israeli military chief, said his forces came under attack by indiscriminate fire from Palestinian militants. The army released a body cam video of forces in the town while heavy fire is heard in the background.

But after earlier suggestions by Israeli officials that Palestinian fire may have killed the journalist, Kohavi said "at this stage we cannot determine by whose fire she was harmed and we regret her death". Kohavi said a special team was being formed to investigate.

Al Jazeera accused Israel of "deliberately targeting and killing our colleague". Palestinian journalists who were with Abu Akleh at the time said they made their presence known to Israeli soldiers, and that they did not see militants in the area.

Abu Akleh's producer, Palestinian journalist Ali Samoudi, was hospitalised in stable condition after being shot in the back. He said any suggestion they were shot by militants was a "complete lie". 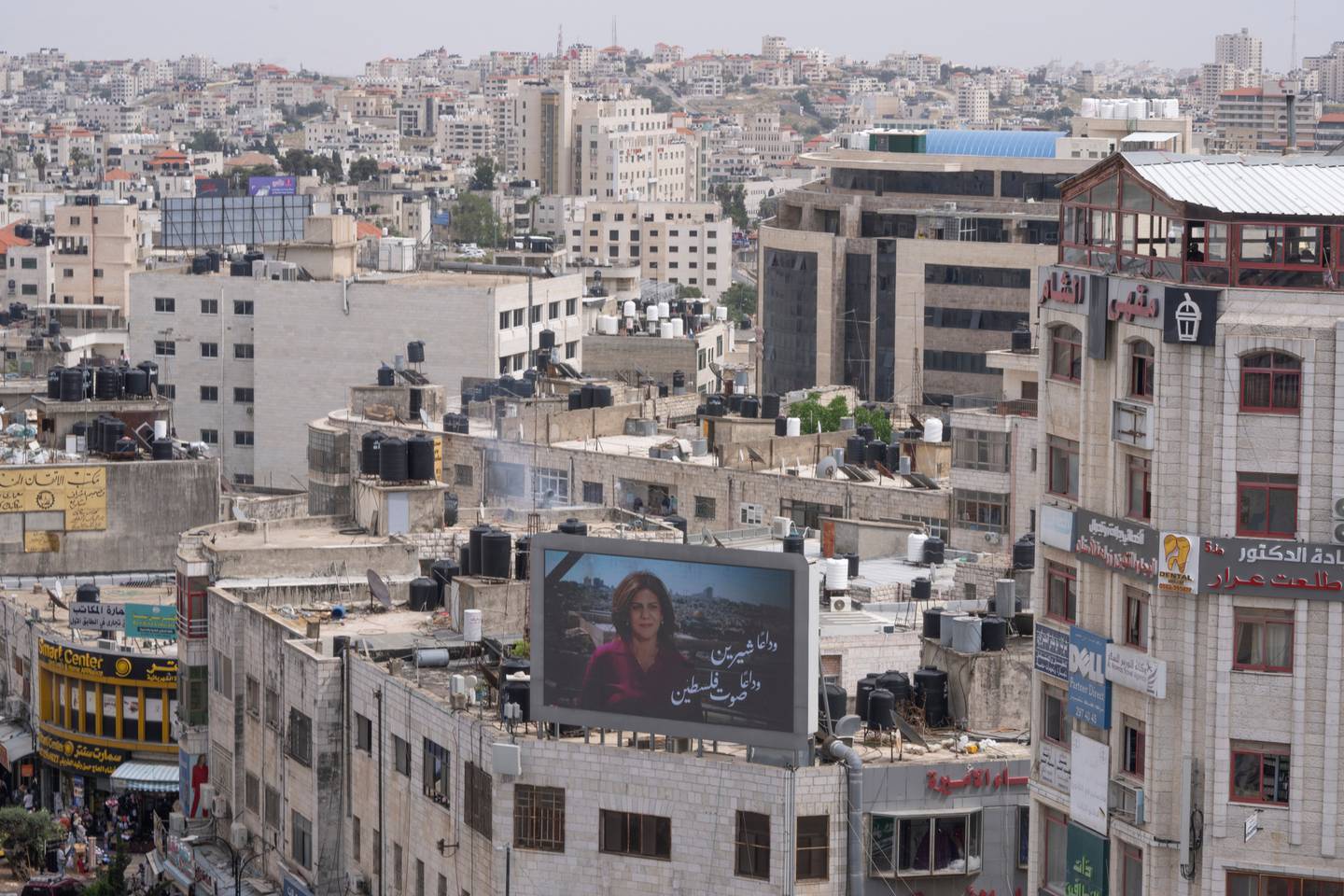 An outdoor screen in the West Bank shows a picture of Al Jazeera journalist Shireen Abu Akleh and Arabic that reads, 'goodbye Shireen, the voice of Palestine'. Photo / AP

The outcome of Israel's military investigation will be closely watched. The International Criminal Court has opened an investigation into possible war crimes by Israel in both the occupied West Bank and the Gaza Strip.

Israel does not recognise the court's jurisdiction and has called the investigation unfair and antisemitic. One of its key arguments against the probe has been that its military justice system is capable of investigating itself.

The findings of its probe into Abu Akleh's death could draw new scrutiny. Hussein Al Sheikh, a top Palestinian official, said the Palestinians would transfer its information on the case to the court.

The Palestinian forensics institute said an initial autopsy was inconclusive. Rayan al-Ali, director of the institute, said a deformed bullet was recovered and was being further studied to determine who had fired it.

In New York, the US ambassador to the United Nations, Linda Thomas-Greenfield, called Abu Akleh's death "really horrifying" and called for a transparent investigation. She said protecting American citizens and journalists was "our highest priority".

Thomas-Greenfield said Abud Akleh did "an extraordinary interview" with her in the West Bank last November. "I left there feeling extraordinary respect for her," she said. The UN Human Rights office urged for an "independent, transparent investigation into her killing. Impunity must end."

Al Jazeera, which has long had strained relations with Israel, interrupted its broadcast to announce her death early Wednesday.

In a statement flashed on its channel, it called on the international community to "condemn and hold the Israeli occupation forces accountable for deliberately targeting and killing our colleague".

It aired a separate video showing Abu Akleh lying motionless on the side of a road wall as another journalist crouches nearby and a man screams for an ambulance. Gunfire rings out in the background. Both reporters were wearing blue flak jackets clearly marked with the word "PRESS". The video did not show the source of the gunfire.

The Palestinian Authority, which administers parts of the occupied West Bank and cooperates with Israel on security matters, condemned what it said was a "shocking crime" committed by Israeli forces.

Qatar, the Arab League and Jordan all condemned the shooting, and in the Jordanian capital of Amman, a group of journalists and activists held a solidarity march outside Al Jazeera's offices.

Israelis have long been critical of Al Jazeera's coverage, but authorities generally allow its journalists to operate freely.

Relations between Israeli forces and the foreign media, especially Palestinian journalists, are strained. A number of Palestinian reporters have been wounded by rubber-coated bullets or tear gas while covering demonstrations in the West Bank and east Jerusalem.

Two Palestinian journalists were shot and killed by Israeli forces while filming violent protests along the Gaza frontier in 2018.

In November of that year, AP cameraman Rashed Rashid was covering a protest near the Gaza frontier when he was shot in the left ankle, apparently by Israeli fire. The military has never acknowledged the shooting.

During last year's war between Israel and Gaza's militant Hamas rulers, an Israeli airstrike destroyed the building in Gaza City housing the offices of The Associated Press and Al Jazeera. Residents were warned to evacuate and no one was hurt in the strike. Israel said Hamas was using the building as a command center but has provided no evidence.

The Foreign Press Association, which represents some 400 journalists working for international media, said it was "appalled and deeply shocked" by the killing and expressed hope "that those responsible for this horrible death will be held accountable."