In 2003, policeman Dick Heller was part of a joint action in the US District Court of Washington, DC concerning the Second Amendment of the United States Constitution, better known as the right to bear and keep firearms.

Living near a social housing complex that was a haven for drug deals, break-ins and gang violence, Heller claimed he had bullets fired through his house multiple times, and believed he had a right to protect himself within his own home.

However, due to the district's Firearms Control Regulation Act (1975), Heller was unable to travel home with his firearm, despite his history and experience in the force.

In a case titled Parker v District of Columbia, Heller joined five other plaintiffs in appealing to the court to reverse the enforcement of three provisions within the act; the banning of handgun registration, the prohibition on the carrying of unlicensed "deadly or dangerous" weapons capable of being concealed, and a ruling that firearms be disassembled or locked when stored to prevent firing.

Five years later, finding himself the only plaintiff that had the standing to sue, Heller took the case all the way to the US Supreme Court.

Now known as District of Columbia v Heller, the court ruled 5-4 in favour of Heller's team.

For the first time in history, it was affirmed at a national level that the US Constitution permitted that citizens could carry arms independent of service in a state militia, and use firearms for traditionally lawful purposes, including self-defence within the home.

The majority held that the Second Amendment's preamble of a regulated militia being "necessary to the security of a free State," was jeopardised when citizens were denied the right to private arms, with preventive laws undercutting any chance to form a militia in the future, should it be required.

It was a monumental ruling that dramatically enhanced the freedoms of American citizens to bear firearms nationwide. Less than two decades later, the US finds itself grappling with an epidemic of mass shootings and gun violence, that, since the ruling, has spiralled further and further out of control.

The firearm 'fetish' gripping the nation

Since the ruling, mass shootings – defined as having four or more victims – have risen steadily in America.

The past decade alone has seen gun massacres triple in frequency, with over half of America's deadliest rampages on record occurring in the 14 years since the ruling, including last month's Robb Elementary School shooting in Uvalde, Texas, which saw 21 people killed (including 18 children). "Gun ownership and use have really changed a lot over the past few decades," Associate Professor David Smith of the US Studies Centre at the University of Sydney told news.com.au.

"When President Kennedy was assassinated in 1963 with a military-style rifle, there was widespread consensus about the need for gun control, that citizens shouldn't have these military-style weapons.

"Even the National Rifle Association (NRA) got behind gun control.

"However, things began to change as political divides deepened in the 1970s.

"We saw the Republican Party moved hard to the right – there was really a right-wing takeover within, and it moved from being this sporting shooters association to one that was a lot more politicised and really committed to an extreme position on gun rights," Prof Smith said.

"Democrats used to be very wary of not crossing the NRA because they felt they would lose what support they had left in southern states.

"They've lost those areas anyway, so they're no longer concerned about the lobby, which has driven the polarisation far deeper.

"Guns have become very symbolic of an issue that divides the two – similar to abortion.

"You would not be able to get a Republican nomination if you stood in favour of gun control and vice versa."

As the gulf between the two mainstream political parties deepened in the latter 20th century, calls for military-style weapons to be available to the community ratcheted up. 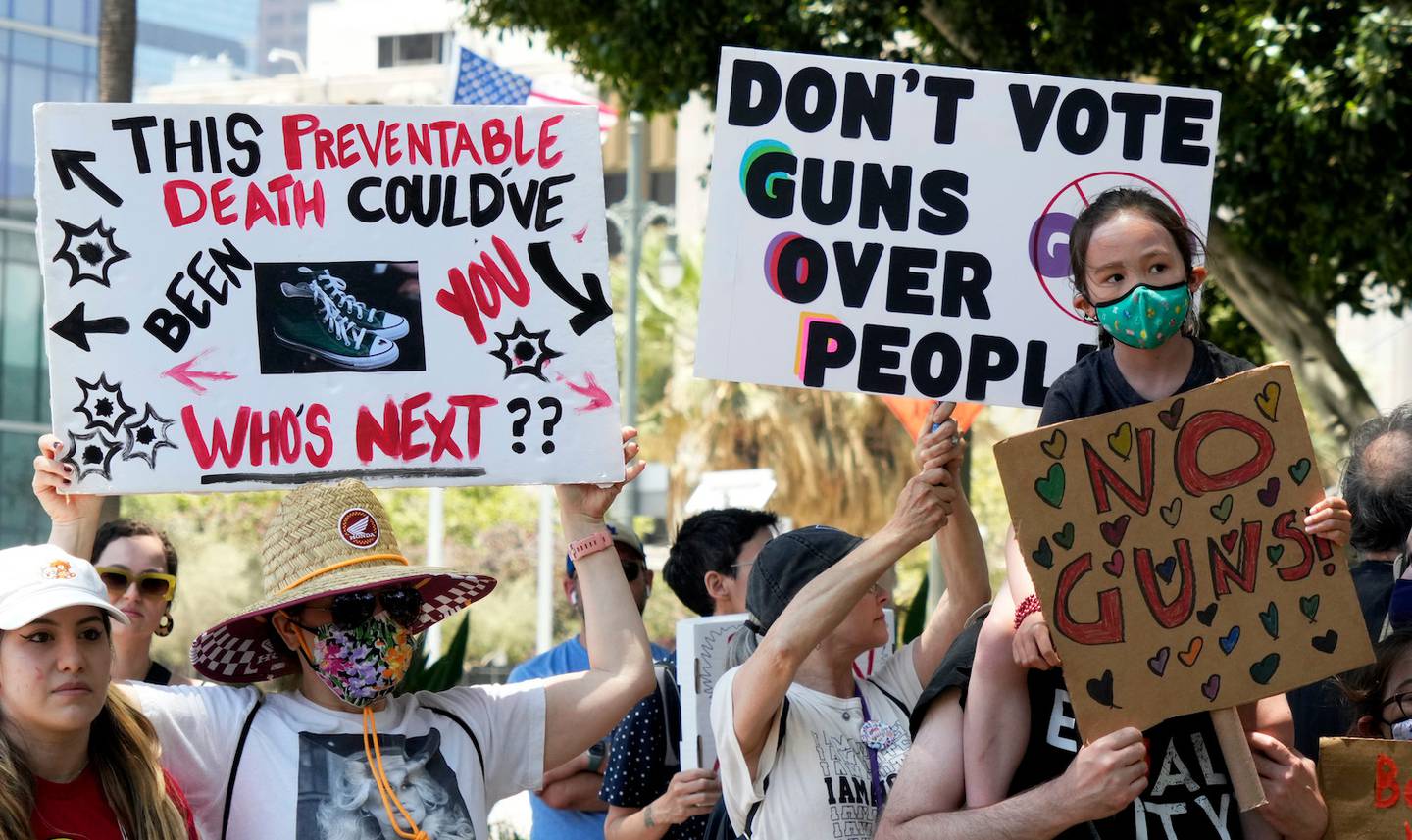 "American gun culture didn't traditionally include semiautomatic weapons – semi-auto's were banned in the US in 1994 under the Assault Weapons ban which expired in 2004," said Prof Smith.

"Since then, there's been an exponential growth in semiautomatic weapons, and that's been a result of deliberate marketing from gun manufacturers. Riley P, 10, from Milan, holds up a sign on the steps of the State Capitol in Lansing, Michigan, at a gun control rally. Photo / AP

"From the Iraq war onwards, there's been a real fetish among gun manufacturers and hobbyists for having military-style weapons … people acting like the right to own an MA-15 is a sacred thing is very recent."

Professor Smith also pointed out that the revolutionary foundations of modern America – spawning a prototype of 21st-century democracy 300 years ahead of the curve – was intimately connected to the notion of gun ownership to a far greater cultural degree than a majority of western Europe.

"The Second Amendment (ratified in 1791) is notoriously ambiguous," he said.

"It appears to guarantee the right to bear arms because of the supposed need for a well-regulated militia – this goes all the way back to the war of independence, and the initial idea of the right is actually taken from the English Bill of Rights (1689) which concerned Protestants arming themselves against Catholics.

"A major part of revolutionary ideology is when government becomes tyrannical people have a duty to resist and any attempt at control is seen as the kind of overreach that they overthrew in the first place."

Mass shootings 'the tip of the iceberg'

Fast-forward to 2022 and the nation is dealing with yet another record-breaking year of gun violence, coming off one of the worst months of mass shootings in recent memory.

Hopes were raised when earlier this month a bill passed the lower house of congress seeking to impose restrictions of firearms, such as age limits on certain weapon classes and ammunition.

A Republican-held upper-house meant the bill itself had little to no chance of being codified into law.

However, against the odds, a crossbench coalition of 10 Republicans and 10 Democrats struck a deal involving enhanced mental health background checks, with more resources available to schools to teach children about gun safety. 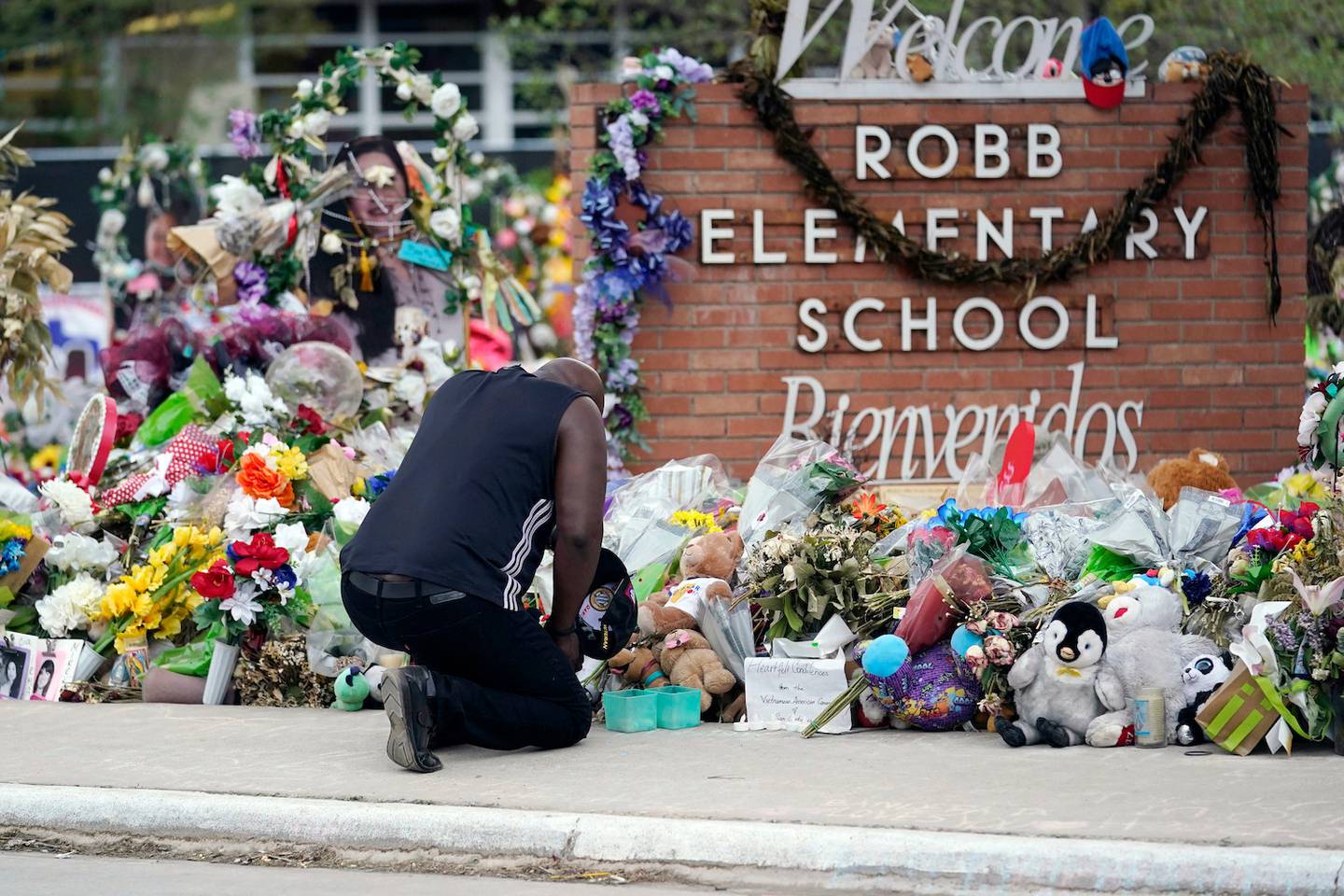 Despite being significantly less ambitious than the proposal initially put forth, experts have labelled it the most significant advancement in three decades.

"Members of Congress have become a lot more responsible to their voters on this issue, and many of them are overwhelmingly in favour of gun control – albeit under the term 'gun safety", Prof Smith said.

However, he warned new or updated laws would hardly scratch the surface of the issue around mass shootings.

"New laws tend to be very modest … they might stop people buying a rifle on their 18th birthday and deciding they're going to commit mass-murder suicide, but even that could be too radical," he said.

He also added that mass shootings were far from the biggest cause of death due to firearms in America.

"Mass shootings are only the tip of the iceberg when it comes to gun violence – 30,000 die by a gunshot every year, two-thirds of which are suicide," he said.