Prosecutors charged three more police officers today in the death of George Floyd and filed a new, tougher charge against the officer at the centre of the case, delivering a victory to protesters who have filled the streets in the United States to fight police brutality and racial injustice.

The most serious charge was filed against Derek Chauvin, who was caught on video pressing his knee to Floyd's neck and now must defend himself against an accusation of second-degree murder. The three other officers at the scene were charged for the first time with aiding and abetting second-degree murder and second-degree manslaughter.

All four were fired last week. If convicted, they could be sentenced to up to four decades in prison. 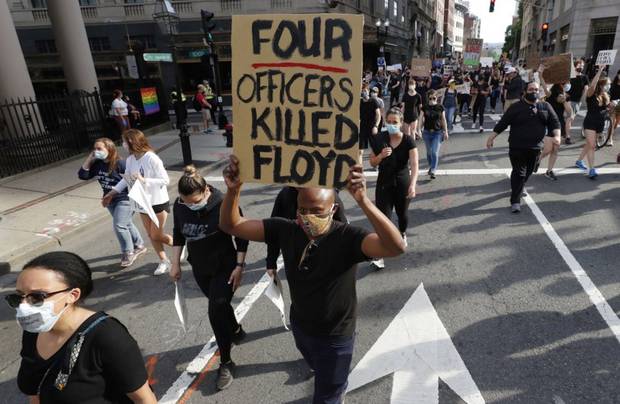 People march in protest against police brutality in Boston today following the death of George Floyd, who died after being restrained by Minneapolis police officers. (Photo / AP)

The other officers — Thomas Lane, J. Kueng and Tou Thao — face the same maximum penalties for aiding and abetting.

The additional charges were sought by Minnesota Attorney General Keith Ellison, who called the protests unleashed by the death "dramatic and necessary" and said Floyd "should be here and he is not."

"His life had value, and we will seek justice," said Ellison, who cautioned that winning convictions would be hard and said that public pressure had no bearing on his decisions.

Hundreds of protesters were in New York City's Washington Square Park when the charges were announced.

"It's not enough," protester Jonathan Roldan said, insisting all four officers should have been charged from the start. "Right now, we're still marching because it's not enough that they got arrested. There needs to be systematic change." Family attorney Ben Crump, left, escorts Quincy Mason, second from left, a son of George Floyd today as they and some family members visited a memorial where Floyd was arrested and died. (Photo / AP)

Ben Crump, an attorney for Floyd's family, called it "a bittersweet moment" and "a significant step forward on the road to justice." Crump said Elison had told the family he would continue his investigation into Floyd's death and upgrade the charge to first-degree murder if warranted.

The move by prosecutors punctuated an unprecedented week in modern American history, in which largely peaceful protests took place in communities of all sizes but were rocked by bouts of violence, including deadly attacks on officers, rampant thefts and arson in some places.

Some of the rockiness of the days since Floyd's May 25 death dissipated on Tuesday night, with demonstrations continuing around the United States, but without major reports of violence.

Curfews and efforts by protesters to contain earlier flare-ups of lawlessness were credited with preventing more widespread damage to businesses in New York and other cities overnight.

"Last night we took a step forward in moving out of this difficult period we've had the last few days and moving to a better time," New York Mayor Bill de Blasio said. 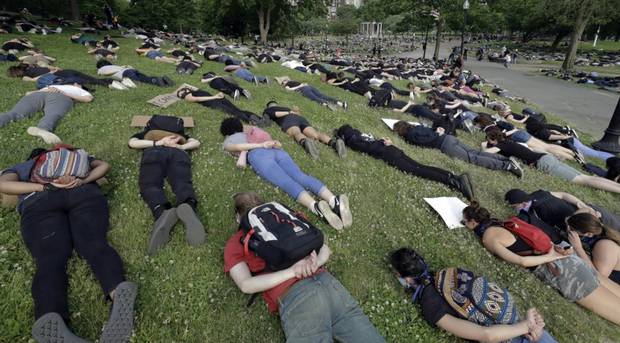 Demonstrators lie face down depicting George Floyd during his detention by police during a protest against police brutality on Boston Common today. (Photo / AP)

New York police said about 280 people were arrested on protest-related charges Tuesday night, compared with 700 a day earlier. Nationwide, more than 9000 have been arrested in connection with unrest.

At least 12 deaths have been reported, though the circumstances in many cases are still being sorted out.

Some tense incidents continued Tuesday night, but were far less prevalent than in preceding days. Police and National Guard troops used tear gas, flash-bang grenades, nonlethal rounds and other means of dispersing crowds near a police precinct in Seattle, near Centennial Park in Atlanta and at demonstrations in Tampa and St. Petersburg, Florida.

Minnesota has opened a civil rights investigation into whether the Minneapolis Police Department has a pattern of discrimination against minorities.

President Donald Trump has pushed the nation's governors to take a hard line against the violence, saying Tuesday that "lowlifes and losers" were taking over New York's streets. 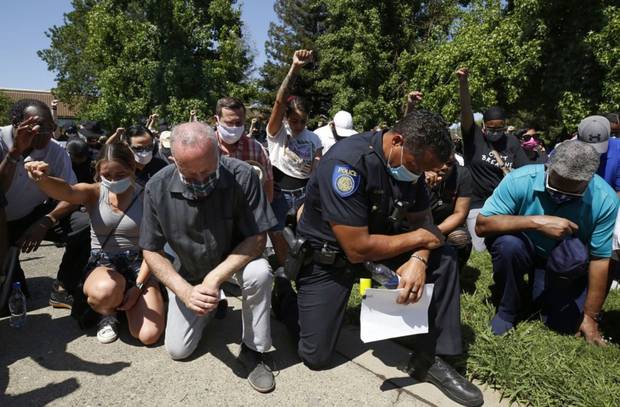 Sacramento Mayor Darrell Steinberg, left, and Sacramento Police Chief Daniel Hahn, right, kneel with others for a moment of silence at a rally in honour of George Floyd. (Photo / AP)

Thousands of protesters took to the streets again in the nation's capital, singing "Amazing Grace" as they knelt. "We are not going anywhere!" they chanted.

Jade Jones, 30, said the protests would continue despite the new charges.

"That's the least they could do," said Jones, who had been attending Washington protests for days. "It's not going to wipe away 400 years of pain."

"We are glad there are additional charges, but that doesn't mean justice has been served," she said. 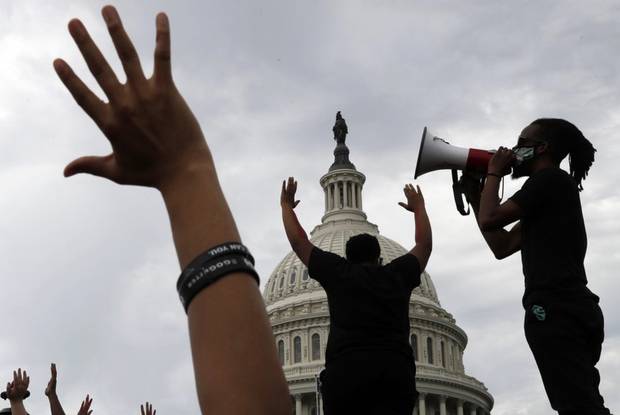 Demonstrators protest the death of George Floyd as they gather today on the East side of the U.S. Capitol in Washington. (Photo / AP)

More than 20,000 National Guard members have been called up in 29 states to deal with the violence.

In Greece, police fired tear gas after young people attacked them Wednesday outside the US Embassy in Athens. Some 4000 protesters had been peaceful until near the end of the demonstration, when some threw gasoline bombs and stones at police. No injuries or arrests were reported. Other protests were held Wednesday in London, Helsinki and Rotterdam, among other cities.

Meanwhile in Philadelphia, a statue of former Mayor Frank Rizzo was removed by the city early Wednesday after repeatedly being targeted by vandals. Rizzo presided over a police force widely accused of racism and brutality in the 1970s.

In Virginia, Governor Ralph Northam was expected to announce plans Thursday for the removal of an iconic statue of Confederate General Robert E. Lee from Richmond's prominent Monument Avenue, a senior administration official told The Associated Press. The statue in the former Confederate capital has been the target of vandalism during the protests.