A pickup truck drove through an intersection where protesters were demonstrating Saturday in Tallahassee, Florida, causing people to run screaming out of the way as the vehicle stopped and started and at one point had a person on its hood, according to witnesses and video posted on social media.

Tallahassee Mayor John E. Dailey tweeted later that the driver was taken into custody after hitting the crowd at a low rate of speed. He says no one was seriously injured.

Video shows the truck stopped at a traffic light, and protesters walking around and near it while appearing to speak to the driver. The truck then suddenly accelerates.

Lucas von Hollen, an instructor at Florida State University, said he saw the incident as protesters were chanting and marching as in a standard demonstration, but then he heard a distinct scream of fear. 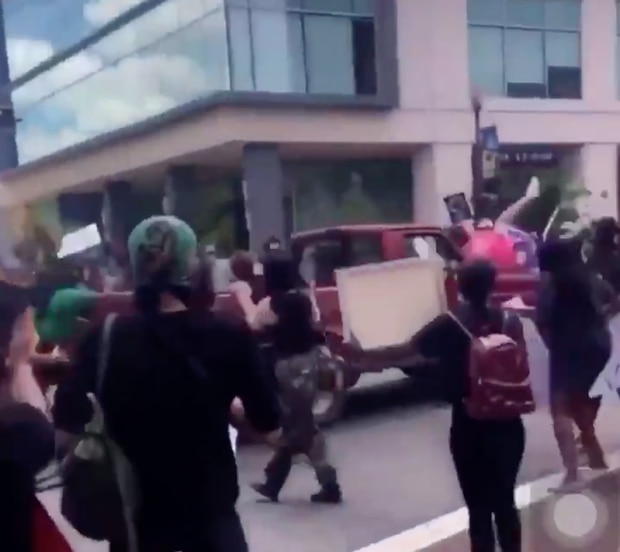 A pick-up truck drove through a protest in Tallahassee, Florida. (Photo / Supplied)

He looked out a window from a second-floor work building and saw the burgundy pickup. He described it slowing down as it had driven up toward the protesters, who didn't move.

"Then the truck revved its engines … a couple people got out of the way, but some people didn't, and it just drove straight through the crowd."

He said people followed the car to prevent the driver from getting away.

Thousands of people across the US have taken to the streets, demanding justice for George Floyd, a black man who died after a white officer pressed a knee into his neck.

One of the officers died from his injury.

In Detroit, a 19-year-old man has been shot and killed after an unknown gunman opened fire on protesters.

As anger over Floyd's killing spread to cities nationwide, local leaders increasingly said they could need help from National Guardsmen or even military police to contain the unrest.

President Donald Trump on Saturday claimed that many Secret Service agents were "just waiting for action" and ready to unleash "the most vicious dogs, and the most ominous weapons, I have ever seen" if protesters angered by his response to George Floyd's death had crossed the White House's security fence.

In a series of tweets hours after hundreds of demonstrators had massed outside the White House and scraped with officers in riot gear, Trump belittled them, doubted their allegiance to Floyd's memory, said they were only out "to cause trouble" and were "professionally managed." He offered no evidence to back his assertions, and the president even seemed to invite supporters to make their presence felt: "Tonight, I understand, is MAGA NIGHT AT THE WHITE HOUSE???"

Great job last night at the White House by the U.S. @SecretService. They were not only totally professional, but very cool. I was inside, watched every move, and couldn’t have felt more safe. They let the “protesters” scream & rant as much as they wanted, but whenever someone....

Georgia's governor declared a state of emergency early Saturday to activate the state National Guard as violence flared in Atlanta. Portland Mayor Ted Wheeler also declared an emergency and ordered a nighttime curfew for the city.

Another 500 Guard soldiers were mobilised in and around Minneapolis, where Floyd died and an officer faced charges Friday in his death. But after another night of watching fires burn and businesses ransacked, Minnesota Gov. Tim Walz said early Saturday that he was moving to activate more than 1,000 more and was considering federal help. A protester throws a window cleaner at police standing guard of an Ez Go gas station after the station was damaged following a protest in Lincoln, Nebraska. (Photo / AP)

The Guard was also on standby in the District of Columbia, where a crowd grew outside the White House and chanted curses at President Donald Trump. Some protesters tried to push through barriers set up by the U.S. Secret Service along Pennsylvania Avenue, and threw bottles and other objects at officers wearing riot gear, who responded with pepper spray.

"I just feel like he's just one of many names that we've had to create hashtags and T-shirts and campaigns for and I feel like nothing has changed," district resident Abe Neri said of Floyd. "And so that's why I'm out here. Yeah, when you say nothing you're taking the side of the oppressor." 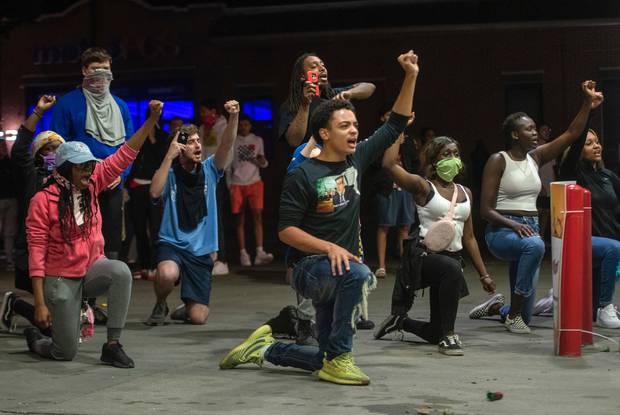 Protesters raise their fists as they gather near the police at the Ez Go gas station after the station was damaged following a protest of the killing of George Floyd. (Photo / AP)

Many protesters echoed that frustration, that Floyd's death was one more in a litany. The anger that seized the nation comes in the wake of the killing in Georgia of Ahmaud Arbery, who was shot after being pursued by a white father and son while running in their neighborhood, and in the middle of the coronavirus pandemic that has thrown millions out of work, killed more than 100,000 people in the U.S. and disproportionately affected black people.

In scenes both peaceful and violent across the nation, thousands of protesters chanted "No justice, no peace" and "Say his name. George Floyd." They hoisted signs reading: "He said I can't breathe. Justice for George."

Georgia Gov. Brian Kemp tweeted that up to 500 members of the Guard would deploy immediately "to protect people & property in Atlanta." He said he acted at the request of Atlanta Mayor Keisha Lance Bottoms, who earlier appealed in vain for calm.

Some demonstrators smashed police cars and spray-painted the iconic logo sign at CNN headquarters in downtown Atlanta. At least three officers were hurt and there were multiple arrests, Atlanta police spokesman Carlos Campos said, as protesters shot at officers with BB guns and threw bricks, bottles and knives.

Atlanta officials said crews were temporarily unable to reach a fire at Del Frisco's restaurant in the Buckhead neighborhood several miles north because of protesters there.

"This is not in the spirit of Martin Luther King, Jr.," Bottoms said. "You are disgracing the life of George Floyd and every other person who has been killed in this country."

"We have to be better than burning down our own homes. Because if we lose Atlanta what have we got?" said Killer Mike, crying as he spoke.

A person was killed in downtown Detroit just before midnight after someone in an SUV fired shots into a crowd of protesters near the Greektown entertainment district, police said. In Portland, Oregon, protesters broke into police headquarters and authorities said they lit a fire inside. In Virginia's capital, a police cruiser was set on fire outside Richmond police headquarters, and a city transit spokeswoman said a bus set ablaze was "a total loss," news outlets reported.

Video posted to social media showed New York City officers using batons and shoving protesters down as they took people into custody and cleared streets. One video showed on officer slam a woman to the ground as he walked past her in the street.

Demonstrators rocked a police van, set it ablaze, scrawled graffiti across its charred body and set it aflame again as officers retreated. Blocks away, protesters used a club to batter another police vehicle. The police department said numerous officers were injured.

The names of black people killed by police, including Floyd and Eric Garner, who died on Staten Island in 2014, were on signs and in chants. 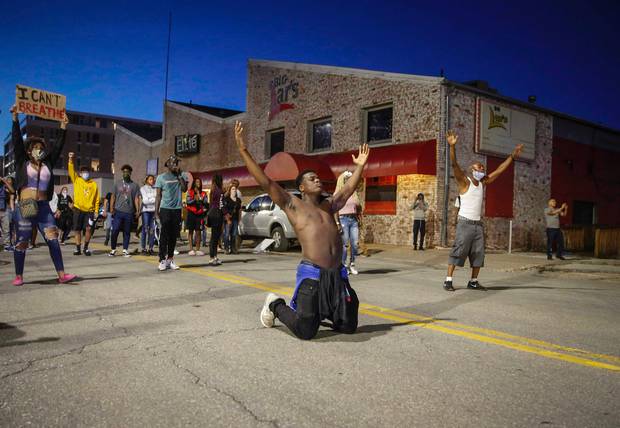 Marcus Lavon raises his hands during a protest in Des Moines. (Photo / AP)

"Our country has a sickness. We have to be out here," said Brianna Petrisko, among those at lower Manhattan's Foley Square, where most were wearing masks amid the coronavirus pandemic. "This is the only way we're going to be heard."

Protesters in Houston, where Floyd grew up, included 19-year-old Jimmy Ohaz from the nearby city of Richmond, Texas: "My question is how many more, how many more? I just want to live in a future where we all live in harmony and we're not oppressed."

Demonstrators on the West Coast blocked highways in Los Angeles and Oakland, California.

About 1,000 protesters in Oakland smashed windows, sprayed buildings with "Kill Cops" graffiti and were met with chemical spray from police, who said several officers were injured by projectiles.

One Los Angeles officer received medical treatment, police said. An LAPD vehicle had its windows smashed, and at least one city bus was vandalized. Police declared an unlawful assembly throughout downtown, where aerial footage from KTLA-TV showed scored of people corralled by police. 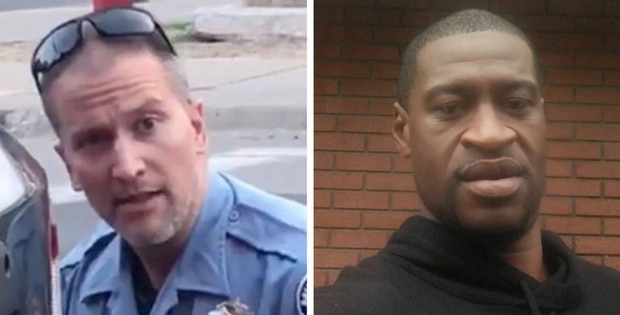 Derek Chauvin, left, has been arrested and charged with murder after kneeling on the neck of George Floyd during an arrest. (Photo / Supplied)

"It was a horrible injustice," he told the AP.

Portland, Oregon, police said at least one shooting was tied to the protest, although details weren't immediately released. Two people were arrested during overnight riots in which protesters set fires throughout downtown and smashed storefront windows, police said, but arrest details were immediately available.

Police, who declared the protest a riot, said they deployed gas after people threw projectiles at them.

Mayor Wheeler tweeted a plea to protesters to remain peaceful and said that, while he had left the city to attend to his dying mother, he was heading back. He later declared a state of emergency.

"Portland, this is not us," he wrote. "How does this honor the legacy of George Floyd?"