Shocking footage shows a tanker truck driving through a crowd of thousands of protesters on a highway in Minneapolis, US.

The crowd were said to be taking a knee to protest the death of George Floyd when the truck barrelled down the Interstate 35W Bridge. 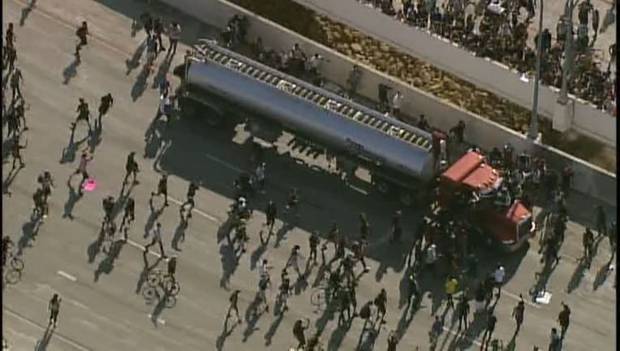 Footage shows a tanker truck driving through a crowd of thousands of protesters. (Photo / Fox 9 Minneapolis)

Footage shows a crowd of people then mobbed the truck and tried to get to the driver, while thousands scattered.

According to reports from FOX 9 Minneapolis, medics rushed to the highway to tend to the people who may have been struck.

As of yet, there are no reports of confirmed injuries.

BREAKING: Thousands of protesters scatter as tanker truck driver speeds into crowd on #Minneapolis interstate; unclear if anyone injured

Minneapolis Police Officer Derek Chauvin was arrested and charged on Friday over the death of George Floyd.

Protests continue to multiply and escalate across several cities in the US, as well as overseas.