When Emily Soriano recounts how her 15-year-old son was gunned down with four friends and two other residents while partying in a Philippine slum six years ago, she weeps in grief and anger like the massacre happened yesterday.

Police concluded at the time that the bloodbath in a riverside shantytown in Caloocan city in the Manila metropolis was set off by a drug gang war. But Soriano angrily blamed four plainclothes police officers and the brutal anti-drug crackdown of outgoing President Rodrigo Duterte for the 2016 killings.

"He didn't lead like a father to the country. He became a monster. His persona and the fury on his face are scary," Soriano said of Duterte in an interview with The Associated Press.

The thousands of killings under Duterte's brutal campaign against illegal drugs — unprecedented in its scale and lethality in recent Philippine history and the alarm it set off worldwide — are leaving families of the dead in agony, an International Criminal Court investigation and a savage side to Duterte's legacy as his turbulent six-year presidency ends today.

One of Asia's most unorthodox contemporary leaders, Duterte, now 77 and frail of health, is closing out more than three decades in the country's often-rowdy politics, where he built a political name for his expletives-laced outbursts and his disdain for human rights and the West while reaching out to China and Russia.

Activists regarded him as "a human rights calamity" not only for the widespread deaths under his so-called war on drugs but also for his brazen attacks on critical media, the dominant Catholic church and the opposition. An opposition senator and one of his fiercest critics, Leila de Lima, has been locked up in high-security detention for five years over drug charges she said were fabricated to muzzle her and threaten other critics.

His decision — just months after he rose to the presidency in 2016 — to allow the burial of former dictator Ferdinand Marcos in the country's heroes cemetery significantly boosted efforts by the Marcoses to burnish the family name. 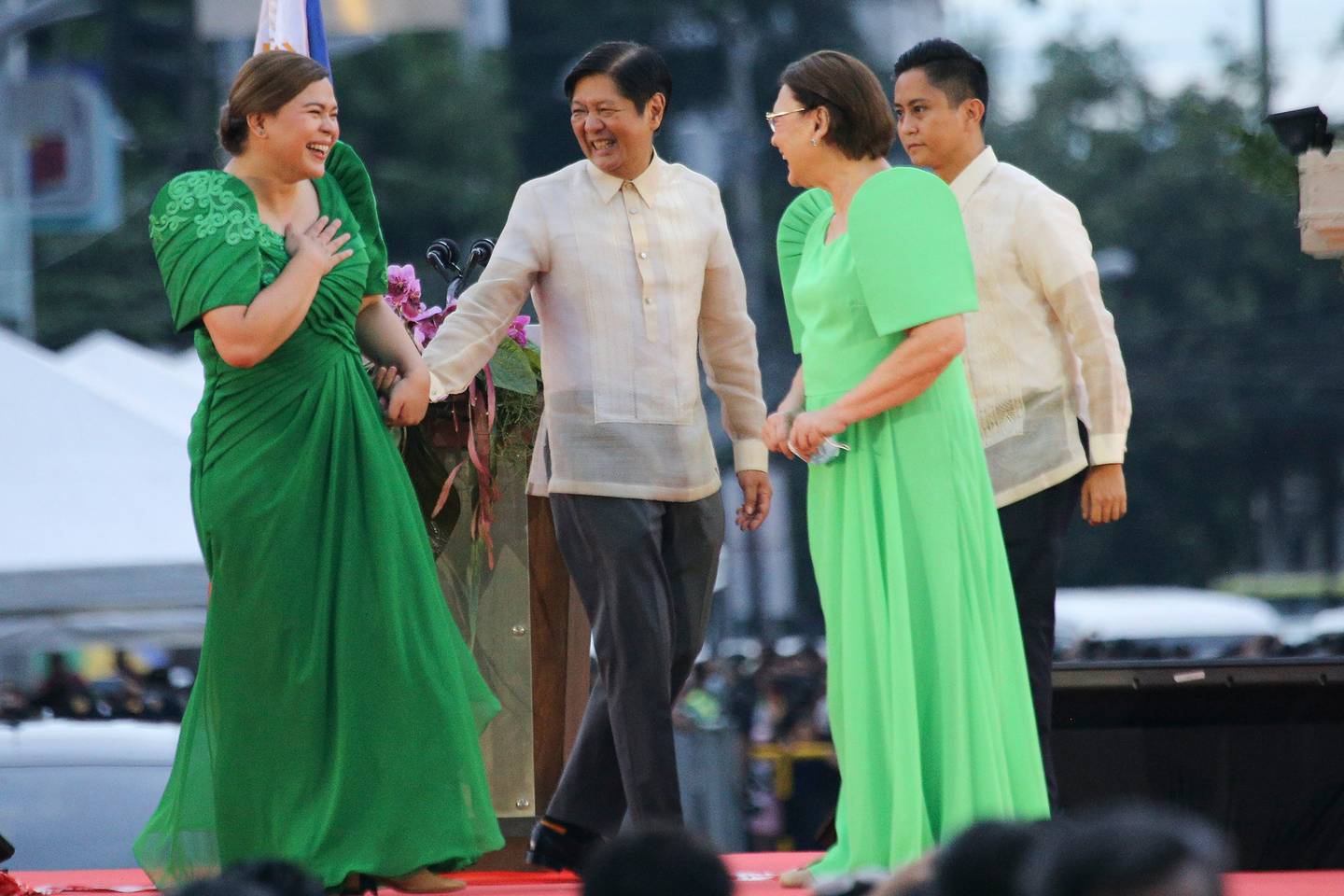 The dictator's namesake son won last month's presidential election by a landslide. Marcos Jr. succeeds Duterte on Thursday and will govern alongside Duterte's daughter, Sara, who won the vice presidency also by a huge margin.

Duterte himself has remained popular based on independent surveys despite the drug campaign deaths and his foibles, which endeared him to many poor Filipinos. His aides have often cited his high popularity ratings to deal with critics and the opposition.

The state-run TV network has been running Duterte legacy documentaries, mostly highlighting his administration's infrastructure and pro-poor projects. In a thanksgiving rally in Manila over the weekend, his supporters waved Philippine flags and cheered him on as he relented to belt a song with an orchestra and popular singers backing him up.

In the dim squalor of Soriano's shanty, however, an air of indignation and mourning still permeates. A wall brims with cluttered photographs of Angelito, her slain son, along with portraits and a statue of the Virgin Mary and a small card that reads: "End Impunity!"

Soriano pleaded to the ICC to resume an investigation into the drug campaign deaths which was suspended in November upon the Philippine government's request. She said she was ready to testify before the international court.

"When my son was buried, I promised I'll give him justice," Soriano said. Emily Soriano holds a picture of her 15-year-old son as she recounts how he was gunned down with four friends and two other residents while partying six years ago. Photo / AP

The ICC has launched an investigation into the drug killings from November 1, 2011, when Duterte was still mayor of southern Davao city, to March 16, 2019 as a possible crime against humanity.

Duterte won the presidency in mid-2016 on an audacious but failed promise to eradicate the menace of illegal drugs and corruption in three to six months.

The ICC, which is based in The Hague, is a court of last resort for crimes that countries are unwilling or unable to prosecute. Only one murder case against three policemen accused of gunning down a teenager they linked to illegal drugs has progressed into a conviction so far and Duterte's opponents have cited that to highlight the difficulty of prosecuting law enforcers and possibly Duterte for extrajudicial killings.

A drug suspect, who was gunned down and left for dead by police officers but surprisingly survived the violence in Metro-Manila in 2016, said he still fears for his life and asked that his real name not be used by journalists for security but added he too would be willing to testify before the ICC if its investigation progresses to a trial.

Asked to comment on Duterte's legacy, he shook his head but expressed hope he and other victims would get justice and possible state reparation.

"I still have a phobia," he told AP, but added that with Duterte's exit "it has eased a little."

More than 6250 mostly poor drug suspects have been killed in Duterte's crackdown based on a government count since he expanded the campaign nationwide after becoming president in 2016.

Human rights proponents have reported much higher death tolls. They added that under his two-decade crackdown against crimes in southern Davao city, where he served as mayor, vice mayor and a congressman starting in 1988, more than 1000 had been killed.

However, Arturo Lascanas, a retired police officer who served under Duterte for many years in a unit fighting heinous crime in Davao, said as many as 10,000 suspects may have been killed in the vast port city on orders of Duterte and the former mayor's key aides.

Duterte has denied authorising extrajudicial killings in Davao or elsewhere in the country but has long openly threatened drug suspects with death and ordered law enforcers to shoot suspects, who threaten them with harm. Vice President-elect Sara Duterte, left, places the hands of her father, outgoing President Rodrigo Duterte, on her forehead as a sign of respect during her oath taking rites. Photo / AP

"All of you who are into drugs, you sons of bitches, I will really kill you," Duterte told a huge crowd in a 2016 presidential campaign sortie in Manila's Tondo slum district. "I have no patience, I have no middle ground, either you kill me or I will kill you idiots."

Lascanas, 61, said he was also ready to testify in a potential ICC trial and provide crucial evidence that can prove Duterte ordered and funded many killings and abductions in Davao.

"The No. 1 physical evidence is myself," Lascanas, who has gone into hiding outside the Philippines, told AP in a video interview.

"Duterte must be given his day in court to face the consequences of his madness because this is a very dangerous precedent for the next generation of public officials in the country and probably to the entire humanity," he said.

Lascanas has provided details of many of the alleged killings in a 186-page affidavit and in testimonies he made at the Senate before he left the Philippines in 2017.

A Catholic missionary priest, Flavie Villanueva, said the widespread killings have left many orphans, deprived already-poor families of breadwinners and sparked other complex problems that Duterte was leaving behind.

Villanueva heads a religious centre in Manila that provides food, shelter, livelihood training and burial assistance to more than 270 families of slain victims. He said that's just a tiny fraction of the many families devastated by the drug campaign violence in a largely unnoticed humanitarian crisis sparked by the killings.

Another tragic consequence of Duterte's populist and coercive style is the blurring of the line between right and wrong that has sparked arguments among people and even within the church, Villanueva said, adding he often asks Duterte's apologists: "Are we reading the same Bible?"

As Duterte leaves, Villanueva said, "We're not only broken and wounded. We are even divided as a church and as a people."