Faced with tough questions about leaving Afghanistan, including Americans left behind, President Joe Biden plans to address the nation about the way forward after 20 years of US war.

Biden is under heavy criticism, particularly from Republicans, for his handling of the final evacuation, which airlifted more than 120,000 people from Kabul airport but left more than 100 Americans behind.

The White House signalled Biden would look to begin turning the corner on Afghanistan with his address.

"He will make clear that as president, he will approach our foreign policy through the prism of what is in our national interests, including how best to continue to keep the American people safe," press secretary Jen Psaki said.

The last Air Force transport plane departed Kabul one minute before midnight Monday, raising questions about why Biden didn't continue the airlift for at least another day. He had set Tuesday as a deadline for ending the evacuation and pulling out remaining troops after the Taliban took over the country.

Biden said military commanders unanimously favoured ending the airlift instead of extending it. He said he asked Secretary of State Antony Blinken to coordinate with international partners to hold the Taliban to their promise of safe passage for Americans and others who want to leave in the days ahead. Thousands of troops spent a harrowing two weeks protecting the airlift of Afghans, Americans and others seeking to escape a country once again ruled by Taliban militants.

General Frank McKenzie, head of US Central Command, said he believed remaining Americans who want to leave will still be able to. He called the situation heartbreaking but said that even if US forces had stayed another 10 days, "we wouldn't have gotten everybody out that we wanted to get out, and there still would have been people who would have been disappointed with that. It's a tough situation."

Blinken put the number of Americans still in Afghanistan at fewer than 200, "likely closer to 100," and said the State Department would keep working to get them out. He said the US diplomatic presence would shift to Doha, Qatar.

With the last U.S. troops leaving Afghanistan, here's a by-the-numbers look at the war that began nearly 20 years ago. Generations of Americans to come will be paying off its cost, in the trillions of dollars. https://t.co/du39YpPzbX

Jake Sullivan, Biden's national security adviser, said Tuesday of the effort to get remaining Americans out: "It's just that it has shifted from a military mission to a diplomatic mission." On ABC's Good Morning America, he cited "considerable leverage" over the Taliban to complete that effort.

The closing hours of the evacuation were marked by extraordinary drama. American troops faced the daunting task of getting final evacuees onto planes while also getting themselves and some of their equipment out, even as they monitored repeated threats — and at least two actual attacks — by the Islamic State group's Afghanistan affiliate.

A suicide bombing on August 26 killed 13 American service members and about 170 Afghans. More died in various incidents during the airport evacuation. 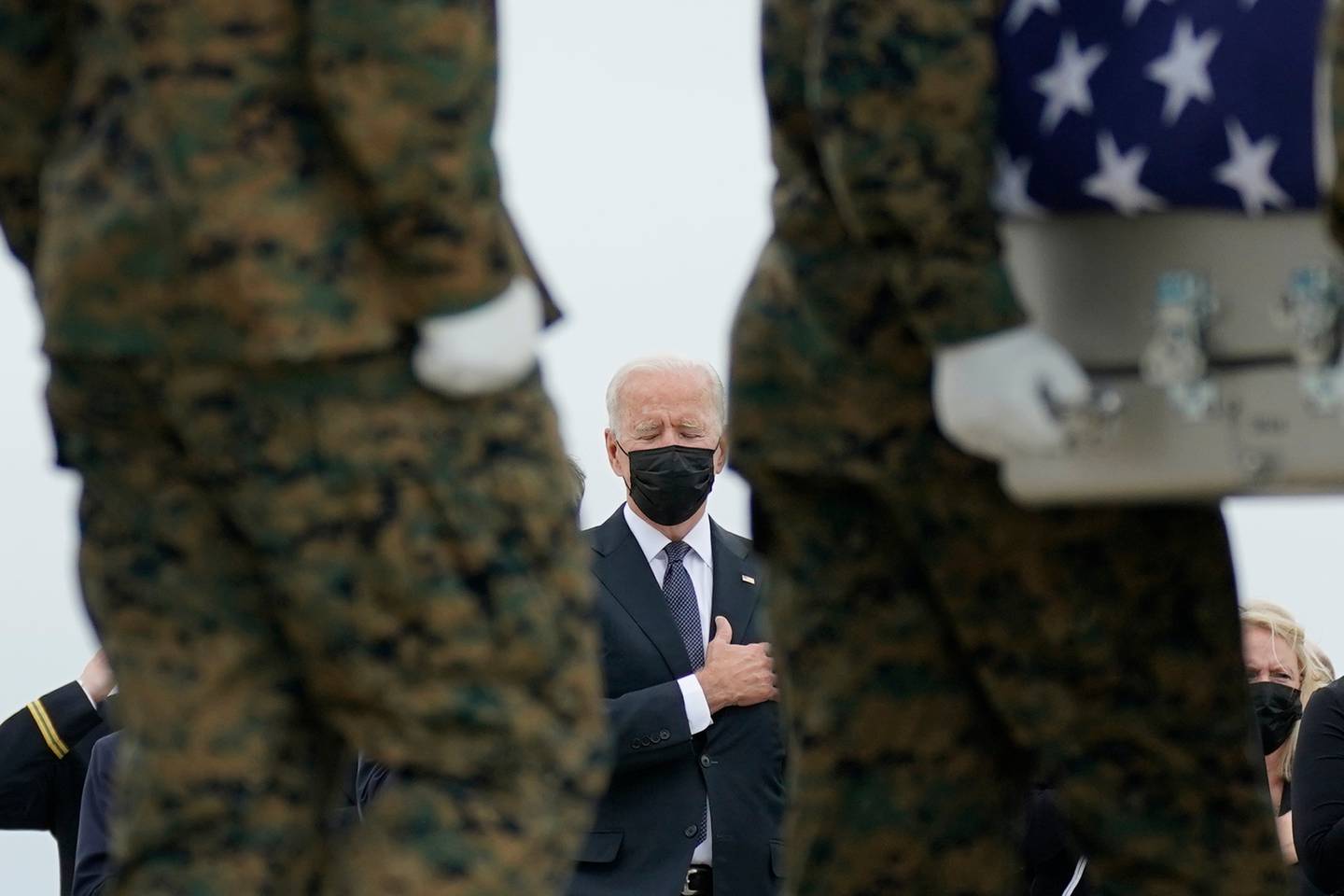 The final pullout fulfilled Biden's pledge to end what he called a "forever war" that began in response to the attacks of September 11, 2001, that killed nearly 3000 people in New York, Washington and rural Pennsylvania. His decision, announced in April, reflected a national weariness of the Afghanistan conflict.

In Biden's view the war could have ended 10 years ago with the US killing of Osama bin Laden, whose al-Qaida extremist network planned and executed the 9/11 plot from an Afghanistan sanctuary. Al-Qaida has been vastly diminished, preventing it thus far from again attacking the United States.

Congressional committees, whose interest in the war waned over the years, are expected to hold public hearings on what went wrong in the final months of the US withdrawal.

Why, for example, did the administration not begin earlier the evacuation of American citizens as well as Afghans who had helped the US war effort?

House minority leader Kevin McCarthy, R-California, on Tuesday described the Biden administration's handling of the evacuation as "probably the biggest failure in American government on a military stage in my lifetime" and promised that Republicans would press the White House for answers on what went wrong.

"We can never make this mistake again," McCarthy said.

It was not supposed to end this way. The administration's plan, after declaring its intention to withdraw all combat troops, was to keep the US Embassy in Kabul open, protected by a force of about 650 US troops, including a contingent that would secure the airport along with partner countries. Washington planned to give the now-defunct Afghan government billions more to prop up its army.

The speed with which the Taliban captured Kabul on August 15 caught the Biden administration by surprise. It forced the US to empty its embassy and frantically accelerate an evacuation effort that featured an extraordinary airlift executed mainly by the US Air Force, with American ground forces protecting the airfield. The airlift began in such chaos that a number of Afghans died on the airfield, including at least one who attempted to cling to a C-17 transport plane as it sped down the runway.