Facebook on Monday removed a campaign video by Missouri US Senate candidate Eric Greitens, while Twitter blocked it from being shared, because the ad showed the Republican brandishing a shotgun and declaring that he was hunting RINOs, or Republicans in Name Only.

In the video, Greitens identifies himself as a Navy SEAL and says he's going RINO hunting. "The RINO feeds on corruption and is marked by the stripes of cowardice," he whispers outside a home on a tree-lined street before a tactical unit breaks through a door and throws what appear to be flash-bang grenades inside.

Greitens, a former Missouri governor who resigned in disgrace in 2018, enters an empty living room through the smoke and says, "Join the MAGA crew. Get a RINO hunting permit. There's no bagging limit, no tagging limit and it doesn't expire until we save our country."

The video comes at a time of renewed focus on gun violence and violence in politics following fatal mass shootings and threats to government officials. Two weeks ago, a man carrying a gun, a knife and zip ties was arrested near Supreme Court Justice Brett Kavanaugh's house after threatening to kill the justice.

On Sunday, Republican Rep. Adam Kinzinger, one of two Republicans serving on the Congressional committee investigating the origins of the Jan. 6 Capitol attack, said he recently received a letter at his home threatening "to execute me, as well as my wife and 5-month-old child."

"We've never seen or had anything like that. It was sent from the local area," Kinzinger, of Illinois, told ABC News, adding that he's not worried about his personal safety but concerned about his family. Kinzinger, who is not running for reelection, is a moderate Republican, a swath of the GOP often disparaged as RINOs by hardline conservatives and supporters of Donald Trump. 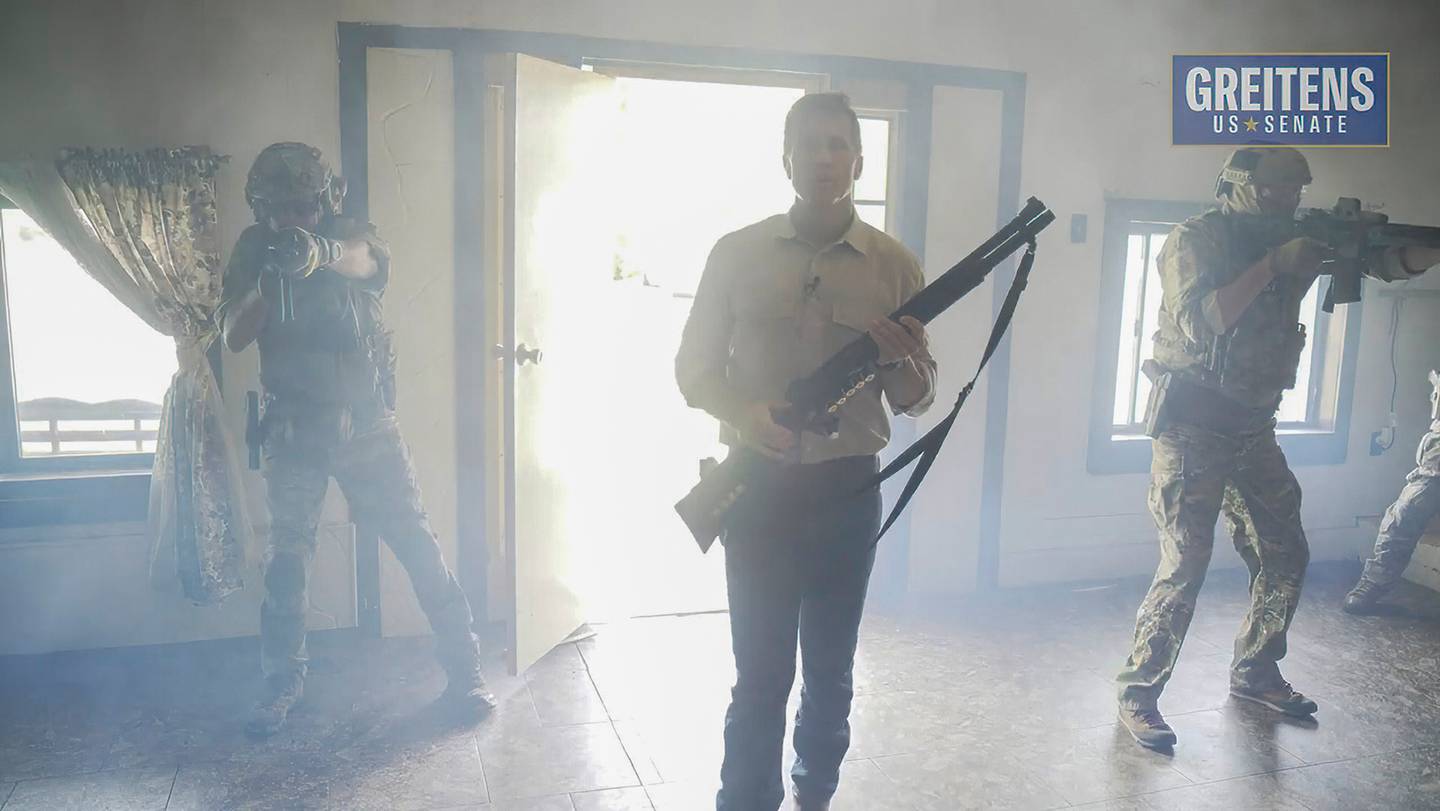 Eric Greitens, a Republican candidate for U.S. Senate in Missouri, in a campaign video ad that shows him brandishing a shotgun.

Facebook said in a statement Monday that the video was removed "for violating our policies prohibiting violence and incitement". Twitter said Greitens' post violated its rules about abusive behaviour but said it was leaving it up because it was in the "public's interest" for the tweet to be viewable. The company's move prevented the post from being shared any further.

Greitens' campaign did not address the action taken by the two social media companies.

"If anyone doesn't get the metaphor, they are either lying or dumb," campaign manager Dylan Johnson said in a brief emailed statement.

The ad was released at a make-or-break time for Greitens' Republican primary campaign to succeed retiring GOP Sen. Roy Blunt, as a crowded field of contenders vie for former President Donald Trump's endorsement. The primary is Aug. 2.

It's the latest dramatic move made by Greitens as he looks to jolt lacklustre fundraising and move past graphic allegations of domestic abuse made in March in a sworn affidavit filed by his ex-wife in March in the former couple's child custody case.

It also follows a well-worn playbook that has helped other Republican candidates juice their standing: make a provocative statement or ad, wait for a backlash to develop, then cite the backlash while trying to raise money from grassroots donors online. In Greitens case, the actions taken by the social media giants could prove to be a further boon. Conservatives have railed against social media companies in recent years, arguing that they aggressively censor right wing voices. (Such actions are often taken because the statements violate the companies guidelines.) 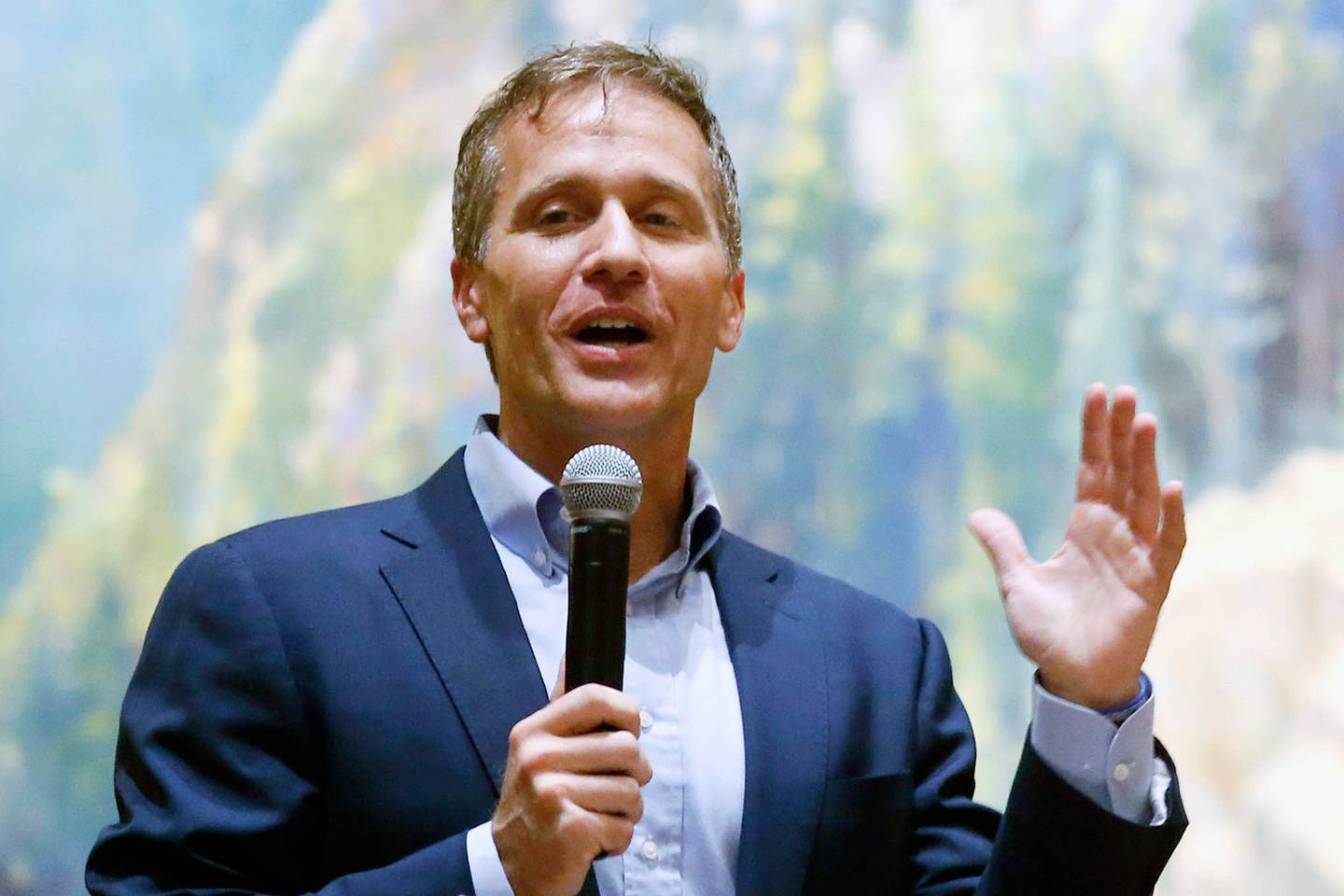 Greitens has been dogged by scandal. Photo / AP

Greitens stepped aside as Missouri's governor in 2018 amid a scandal involving accusations of blackmail, bondage and sexual assault. Sheena Greitens has alleged that, at that time, Eric Greitens was physically abusive to her and one of their sons, while demonstrating such "unstable and coercive behaviour" that steps were taken to limit his access to firearms, court documents state.

Greitens has vehemently denied the allegations. But they've continued to dog him on the campaign trail.

Helen Wade, Sheena Greitens' lawyer, told the Kansas City Star that she would "absolutely" use the video in the couple's ongoing court case.

"This is over the line," Wade told the newspaper while indicating she would file court papers to make the video an exhibit in the case.

Other candidates in the Senate race also condemned the video.

"That's why I'm running. It's time to restore sanity and reject this nonsense. Missouri deserves better," Schatz said in a tweet.

Democrat Lucas Kunce, meanwhile, tweeted that "Terrorists, child abusers, and criminals" like Greitens "shouldn't even be able to get a weapon."

"Help me beat this guy in November, and I'll keep our families safe from criminals like him," Kunce said.

Once a swing state, Missouri has become more reliably Republican in recent years. But the race is nonetheless receiving national attention because some in the GOP establishment are anxious that, with the latest abuse allegations, as well as his previous scandals, Greitens would be vulnerable against a Democrat.

And with the Senate evenly divided, the GOP can't afford to lose what would otherwise be a safe seat.