Coronavirus cases in Europe have begun to rise dramatically, with Spain hitting a total of 500,000 cases sparking fears other nations could be next.

Spain's total cases crossed the half a million mark overnight as the government struggled to contain a surge of infections in one of Europe's hardest-hit countries.

The country of around 47 million people has recorded 525,549 confirmed cases of Covid-19, and 29,516 related deaths, since its first case was diagnosed on January 31 on the remote island of La Gomera in the Canaries, the nation's health ministry said.

Now there is also concern over the rise in cases in France and the UK.

In Britain, people are being warned they are in for a "bumpy ride" over several months after cases skyrocketed over the weekend. 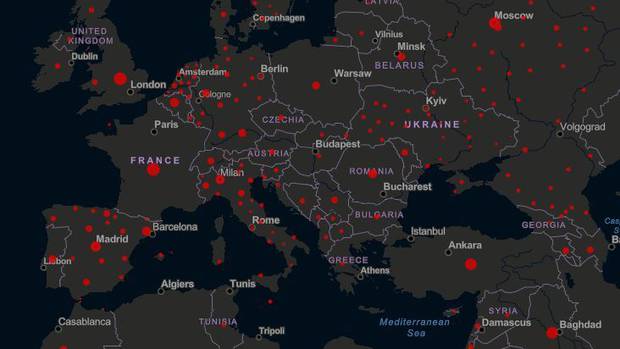 Nations in Europe, including the UK, are seeing their biggest virus spikes in months.

Parts of the UK are facing tougher restrictions after cases rose by 2988 on Sunday – the nation's highest total since May 22 – and a further 2948 cases were recorded yesterday.

England's deputy chief medical officer says the rise is of "great concern" and the nation needs to start taking the virus seriously again.

"People have relaxed too much, now is the time for us to re-engage, and to realise that this a continuing threat to us," Prof Van Tam told the BBC overnight.

He said hospital admissions and deaths were "at a very low level" in the UK and the rise in cases was most prominent among those aged between 17 and 21 and the country risks following the trajectory of some EU countries.

On Monday, the UK added seven Greek islands to its coronavirus quarantine list, but the mainland remains exempt, as the government seeks a more targeted way to limit new cases from abroad.

Transport Secretary Grant Shapps said anyone arriving from Lesbos, Tinos, Serifos, Mykonos, Crete, Santorini or Zakynthos from Wednesday must self-isolate for a fortnight.

Another nation seeing a spike in cases is France, which recorded a further 7071 new cases on Sunday evening, following an increase of around 8500 on Saturday and almost 9000 new cases on Friday.

But the mortality rate is far below that recorded at the height of the health crisis in late March and April, when nearly 900 deaths a day were reported, as the median age of new infections has dropped to around 40.

Asymptomatic cases also account for a far greater proportion of positive results, largely due to a rise in testing.

"The situation is much more favourable but we remain in an upwards phase," the health ministry's emergencies co-ordinator Fernando Simon told journalists.

The rise in infections comes as Spain is reopening its schools after they were closed in March, with some parents saying they are afraid to send their children to class.

The government has implemented several measures to curb the risk of infections in schools, including making the use of masks mandatory for anyone aged six and over and requiring frequent hand washing.

Last month, it ordered nightclubs and cocktail bars to close and shortened restaurant operating hours to try to curb the increase in infections.

The government expects the country's tourism-dependent economy will contract by 9.2 per cent this year under the weight of the pandemic.