A US drone strike blew up a vehicle carrying "multiple suicide bombers" from Afghanistan's Islamic State affiliate before they could attack the ongoing military evacuation at Kabul's international airport, American officials said.

The strike came just two days before the US is set to conclude a massive two-week-long airlift of more than 114,000 Afghans and foreigners and withdraw the last of its troops, ending America's longest war with the Taliban back in power.

The US State Department released a statement signed by around 100 countries, as well as Nato and the European Union, saying they had received "assurances" from the Taliban that people with travel documents would still be able to leave the country. The Taliban has said it will allow normal travel after the US withdrawal is completed on Tuesday and it assumed control of the airport. 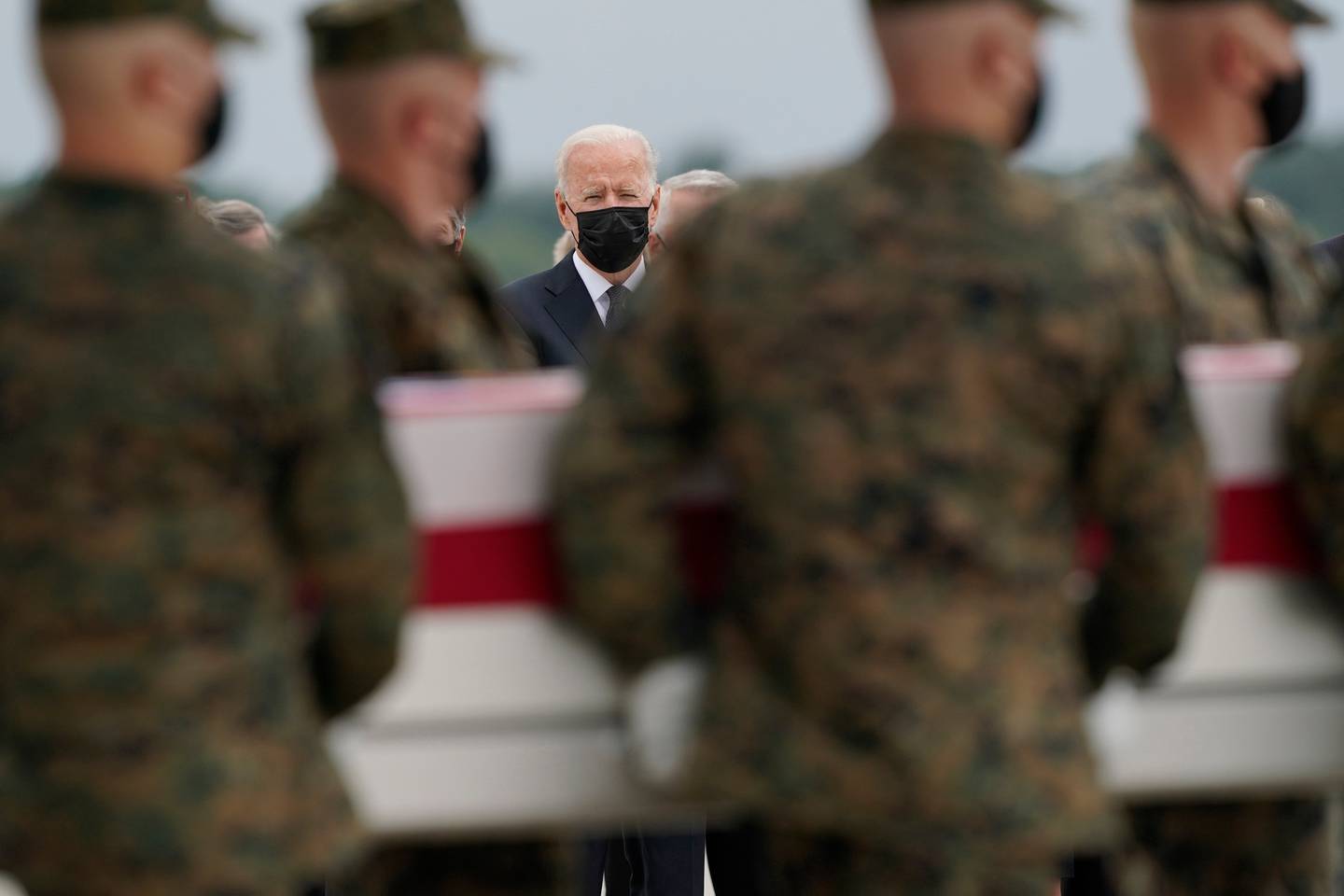 At around the same time as the drone strike, Afghan police said a rocket hit a neighbourhood near the airport, killing a child. Rashid, the Kabul police chief, who goes by one name, confirmed the rocket attack, and video obtained by the Associated Press showed smoke rising from a building around a kilometre from the airport.

The Taliban described the drone strike and the rocket attack as separate incidents, but AP reporters in the Afghan capital heard only one large blast.

US Navy Captain Bill Urban, a military spokesman, said the strike was carried out in "self-defence". He said the military was investigating whether there were civilian casualties but that "we have no indications at this time".

"We are confident we successfully hit the target," Urban said. "Significant secondary explosions from the vehicle indicated the presence of a substantial amount of explosive material."

The strike came two days after an Islamic State suicide attack outside the airport killed at least 169 Afghans and 13 US service members. The US carried out a drone strike elsewhere in the country on Saturday that it said killed two Isis members. US President Joe Biden had vowed to keep up the airstrikes, saying Saturday that another attack was "highly likely". The State Department called the threat "specific" and "credible".

The Sunni extremists of Isis, with links to the group's more well-known affiliate in Syria and Iraq, have carried out a series of attacks, mainly targeting Afghanistan's Shiite Muslim minority, including a 2020 assault on a maternity hospital in Kabul that killed women and newborns.

The Taliban have fought against the IS affiliate in the past and have pledged to not allow Afghanistan to become a base for terror attacks. The US-led invasion in 2001 came in response to the 9/11 attacks, which al-Qaeda planned and executed while being sheltered by the Taliban.

The Taliban increased security around the airport after Thursday's attack, clearing away the large crowds that had gathered outside the gates hoping to join the airlift.

Britain ended its evacuation flights on Saturday, and most US allies concluded theirs earlier in the week. But US military cargo planes continued their runs into the airport Sunday, ahead of a Tuesday deadline set by President Joe Biden to withdraw all American troops.

Biden's national security adviser, Jake Sullivan, said the US has the capacity to evacuate the estimated 300 Americans who remain in the country and wish to leave. He said the US does not currently plan to have an ongoing embassy presence after the withdrawal but will ensure "safe passage for any American citizen, any legal permanent resident" after Tuesday, as well as for "those Afghans who helped us".

In interviews with Sunday talk shows, Secretary of State Antony Blinken said the US was working with other countries to ensure that the airport functions normally after the withdrawal and that the Taliban allow people to travel freely.

The Taliban has given similar assurances in recent days, even as it urged Afghans to remain and help rebuild the war-ravaged country.

Tens of thousands of Afghans have sought to flee the country since the Taliban's rapid takeover earlier this month, fearing a return to the harsh form of Islamic rule the group imposed on Afghanistan from 1996 until 2001. Others fear revenge attacks or general instability.

The Taliban has pledged amnesty for all Afghans, even those who worked with the US and its allies, and says it wants to restore peace and security after decades of war. But many Afghans distrust the group, and there have been reports of summary executions and other human rights abuses in areas under Taliban control.

The shooting of a folk singer in a tense region north of Kabul was bound to contribute to such fears. Fawad Andarabi's family said the Taliban shot him for no reason, just days after they had searched his home and drank tea with him.

"He was innocent, a singer who only was entertaining people," his son, Jawad, said. "They shot him in the head on the farm."

There are repeated allegations that the folk singer #FawadAndarabi was executed by the Taliban in Kishnabad village of Andarab. There is mounting evidence that the Taliban of 2021 is the same as the intolerant, violent, repressive Taliban of 2011. https://t.co/fQ4HhVuM4D

The shooting happened in the Andarabi Valley, for which the family is named, some 100km north of Kabul, where the Taliban battled local fighters even after seizing the capital. The Taliban says it has retaken the region, which is near mountainous Panjshir, the only one of Afghanistan's 34 provinces not under Taliban control.

Taliban spokesman Zabihullah Mujahid said his group would investigate the shooting, without providing any further information. The Taliban banned music as un-Islamic when it last ruled the country.

Andarabi played the ghichak, a bowed lute, and sang traditional songs about his birthplace, his people and the country. A video online showed him at one performance, sitting on a rug with the mountains behind him.

"There is no country in the world like my homeland, a proud nation," he sang. "Our beautiful valley, our great-grandparents' homeland."

Karima Bennoune, the United Nations special rapporteur on cultural rights, said she had "grave concern" over Andarabi's killing. "We call on governments to demand the Taliban respect the #humanrights of #artists," she tweeted.

"There is mounting evidence that the Taliban of 2021 is the same as the intolerant, violent, repressive Taliban of 2001," she tweeted. "Nothing has changed on that front."