Iran has warned the US it's "ready for a fully-fledged war" after it was blamed for a drone attack on Saudi Arabia that wiped out five per cent of the world's crude oil supplies.

In response US president Donald Trump tweeted: "Saudi Arabia oil supply was attacked. There is reason to believe that we know the culprit, are locked and loaded depending on verification, but are waiting to hear from the Kingdom as to who they believe was the cause of this attack, and under what terms we would proceed!"

Meanwhile, US Secretary of State Mike Pompeo directly blamed Iran for the Saudi attack on Twitter late Saturday (US time), and officials worked to provide evidence for his claim the following day.

"Amid all the calls for de-escalation, Iran has now launched an unprecedented attack on the world's energy supply," Pompeo wrote. "There is no evidence the attacks came from Yemen."

On Sunday, Senior US officials, including the Vice President Mike Pence and Defense Secretary Mark Esper, were seen at the White House for a National Security Council meeting about the attack on Saudi Arabia's oil infrastructure.

Crude prices rocketed have more than 19 per cent since the attack on the world's biggest crude-processing facility and the kingdom's second-biggest oilfield.

Before and after satellite images show how the drones, attacking Saudi Arabia's Abqaiq plant and its Khurais oilfield, tore through the facilities — leading to the interruption of an estimated 5.7 million barrels of the kingdom's crude oil.

The attack is the single worst sudden disruption to the oil market ever, and senior members of the US government are laying the blame on Iran.

However, Iran denies any involvement and it has responded with fury to the accusation, going as far as to threaten US bases with missile strikes.

The Islamic Republic's Revolutionary Guard says its forces could strike US military bases across the Middle East with their arsenal of ballistic missiles. 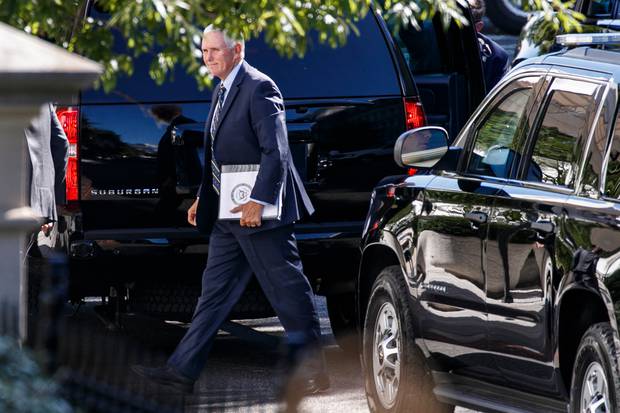 A senior Revolutionary Guard commander, Amirali Hajizadeh, told Tasnim news agency: "Everybody should know that all American bases and their aircraft carriers in a distance of up to 2000km around Iran are within the range of our missiles."

The devastating attack over the weekend halved Saudi Arabian oil production and could fuel a crisis in the region, it has been claimed.

"Because of the tension and sensitive situation, our region is like a powder keg," said Mr Hajizadeh.

"When these contacts come too close, when forces come into contact with one another, it is possible a conflict happens because of a misunderstanding."

He warned that Iran is now "ready for a fully-fledged war".

In response to the attack, senior US senators have suggested striking Iranian oil refineries in response to the assault, claimed by Yemen's Iran-backed Houthi rebels, on Saudi Arabia's largest oil processing facility.

Actions on any side could break into the open a twilight war that has been raging just below the surface of the wider Persian Gulf in recent months.

Already, there have been mysterious attacks on oil tankers that the US blames on Tehran, at least one suspected Israeli strike on Shi'ite forces in Iraq, and Iran shooting down a US military surveillance drone. 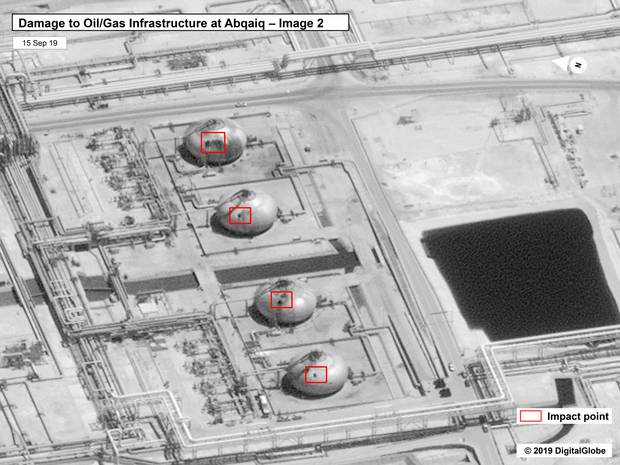 The attack on Saturday on Saudi Arabia's Abqaiq plant and its Khurais oilfield led to the interruption of an estimated 5.7 million barrels of the kingdom's crude oil production per day, equivalent to more than 5 per cent of the world's daily supply.

There was no immediate impact on global oil prices from the attacks as markets were closed for the weekend, but analysts anticipate a spike in oil prices when markets reopen on Monday.

Saudi Arabia has promised to fill the cut in production with its reserves but has not said how long it will take to repair the damage.

Images from the European Commission's Sentinel-2 satellite showed black char marks at the heart of the Abqaiq plant on Sunday, marks not seen over the previous month.

US Secretary of State Mike Pompeo directly blamed Iran for the Saudi attack on Twitter without offering evidence to support his claim. 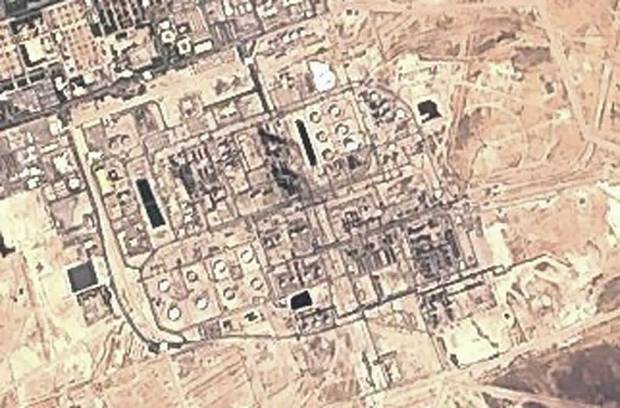 Those militias in recent weeks have been targeted themselves by mysterious air strikes, with at least one believed to have been carried out by Israel. Iranian foreign ministry spokesman Abbas Mousavi dismissed Mr Pompeo's remarks as "blind and futile comments".

He said: "The Americans adopted the 'maximum pressure' policy against Iran, which, due to its failure, is leaning toward 'maximum lies'."

Oil-rich Kuwait also said it would increase security around the country's "vital sites" over the attacks.

Houthi leader Muhammad al-Bukhaiti reiterated his group's claim of responsibility, saying it had exploited "vulnerabilities" in Saudi air defences to strike the targets.

Iran, meanwhile, kept up its own threats. 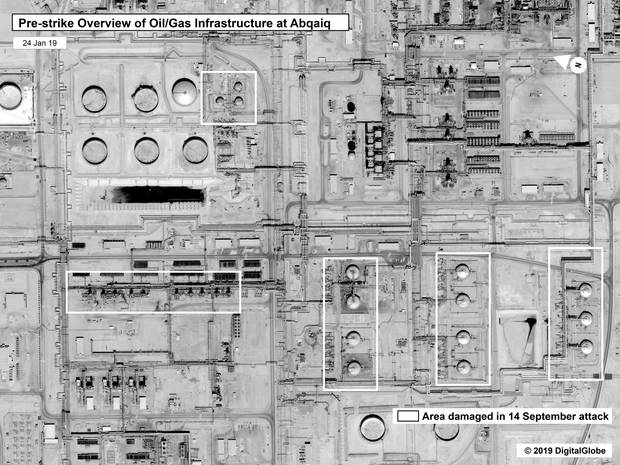 Hajizadeh, who leads the country's aerospace program, gave an interview published across Iranian media on Sunday that discussed Iran's downing of a US drone in July.

He said Guard forces were ready for a counter-attack if America responded, naming the Al-Udeid Air Base in Qatar and Al-Dhafra Air Base near Abu Dhabi in the United Arab Emirates as immediate targets as well as US Navy ships in the Persian Gulf and the Arabian Sea.

"Iran will not stop their misbehaviour until the consequences become more real, like attacking their refineries, which will break the regime's back," Mr Graham wrote on Twitter.