The President of the United States and the Governor of New York have started their own personal war as they both try to grapple with the state's coronavirus outbreak, which is now the deadliest in the world.

The pair have been at loggerheads for weeks, but things took a turn for the worse this weekend, with President Donald Trump telling New York Governor Andrew Cuomo to "spend more time doing and less time complaining" in a pointed tweet in response to a televised briefing Cuomo had given.

Cuomo fired back at the President, saying he should "get up and go to work" rather than being at home "watching TV".

The United States is now country worst affected by the coronavirus, with more than 732,000 cases and more than 38,000 deaths. The US has more than half a million more cases of coronavirus than other hard hit nations around the world like Spain and Italy, who have just over 191,000 and 175,000 cases respectively.

New York State is the country's coronavirus epicentre, and has been badly affected, with more than 13,200 deaths.

During Governor Cuomo's press conference on Friday Trump, watching on, sent a series of tweets directly to the Governor.

Cuomo had been commenting on his belief that his state, the worst hit by coronavirus, had been short-changed by US federal coronavirus relief packages, and needed another US$500 billion in federal funding to get through the crisis.

"First of all, if he's sitting at home watching TV, maybe he can get up and go to work," Cuomo said, responding to the President's tweets.

Cuomo insisted there were a number of ongoing issues for the federal government to deal with, including funding testing for the people of America.

"He's doing nothing! He says it's up to the states (to open up the country), which it always was. Then he calls it a 'fifty piece puzzle'. It's not a puzzle. That's called a map of the United States."

On Thursday Mr Trump outlined his "Opening Up America Again" plan, which was a road map for different states to ease social distancing restrictions. He said at the time some states were close to being ready to open within days, referring to the country as "a beautiful puzzle".

"Fifty pieces, they're all different," the president said.

The Governor also accused Trump of not having a proper understanding of the Constitution, leading him to claim earlier this week he had the "total authority" to reopen the country. 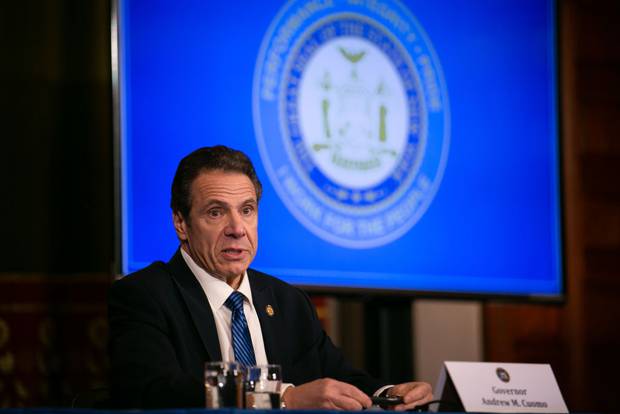 Cuomo said the states "have the power to open on their own timelines".

"Maybe he should have read the Constitution before saying he had the power to open the states?" Cuomo said.

Cuomo said he was thankful for what the President had done for his state, but said it was Trump's job to provide the people with what the governor asked for. "I'm saying thank you for doing your job. This is your role as president," he said.

The President took exception to the assertion that it was a federal role to assist the states with testing, and quickly tweeted back to Cuomo.

"We have given New York far more money, help and equipment than any other state, by far, & these great men & women who did the job never hear you say thanks," Mr Trump wrote.

"Your numbers are not good. Less talk and more action!"