The US Coast Guard battled time and currents on Wednesday as its planes and ships searched for 38 people missing off the coast of Florida, four days after a suspected human smuggling boat capsized in a storm.

The accident killed at least one person and left a single known survivor, and US authorities launched a criminal investigation.

Captain Jo-Ann F Burdian said the survivor told rescuers that the boat capsized Saturday evening shortly after sailing from the Bahamas into a storm. The Coast Guard was alerted Tuesday morning after the crew of a merchant vessel spotted the man sitting alone on the overturned hull of the 25-foot boat. He was taken to a hospital with symptoms of dehydration and sun exposure and turned over to Homeland Security officials, who said he is "conscious and lucid". 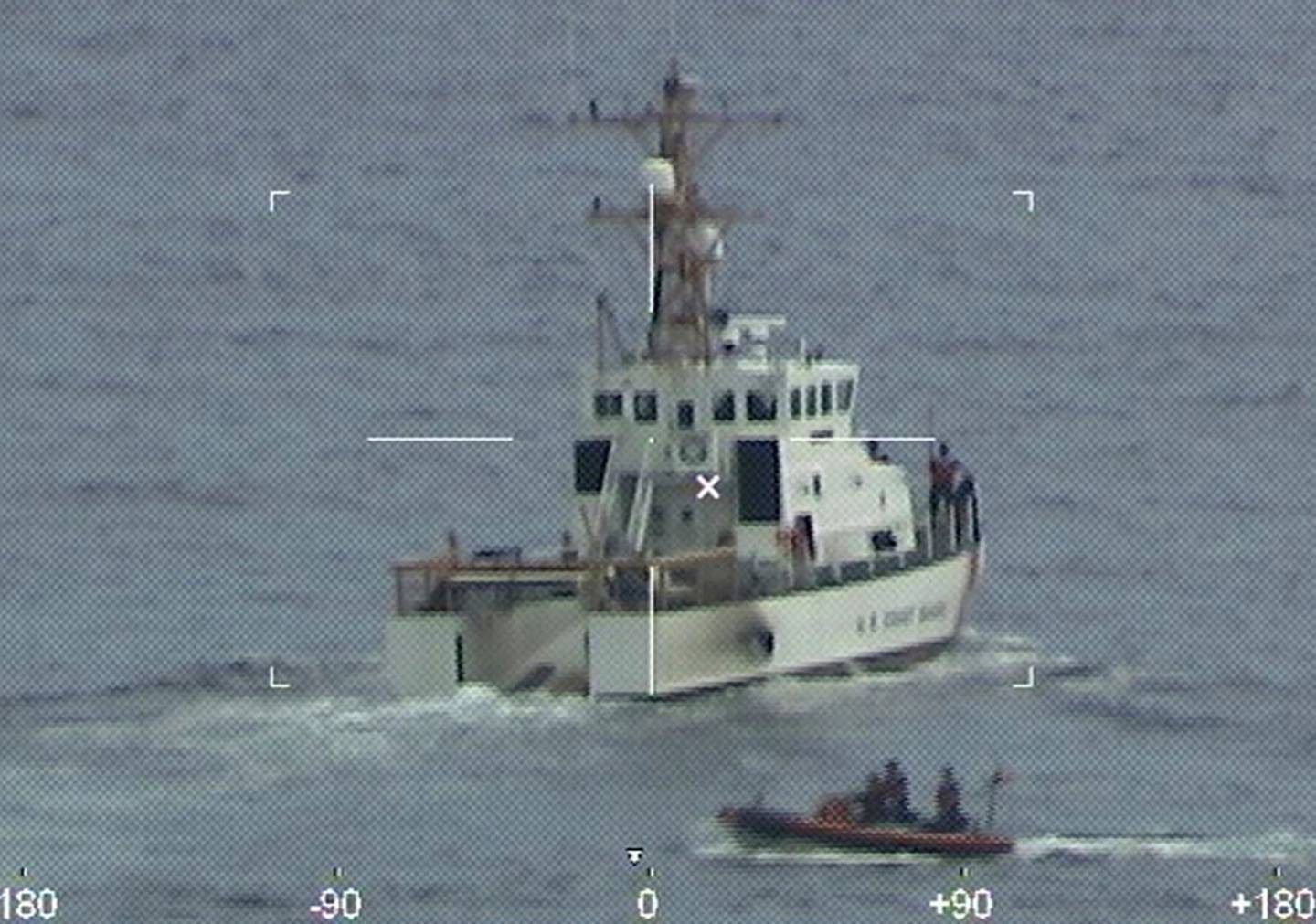 Coast Guard Cutter Ibis' crew searching for people missing from a capsized boat off the coast of Florida. Photo / AP

"With every moment that passes, it becomes much more dire and more unlikely" that survivors will be found, she told a news conference.

Crews searched around the clock, extrapolating from where the wreck was spotted about 64km off Fort Pierce. By Wednesday morning, crews on at least four ships and five aircraft scanned a vast area about the size of New Jersey, Burdian said. They planned to keep searching throughout the day and then re-evaluate.

"We are using every piece of information we can to make sure we are exhausting our search efforts," Burdian said. "But we can't search forever."

The weather forecast through to Thursday suggests scattered rain and thunderstorms in the search area, with swells cresting at 1m and winds blowing at 19-24km/h. The National Weather Service described conditions as "relatively benign" until a strong cold front arrives on Friday.

"You're dealing with criminal organisations that have no value for human life or safety. It's really victimising the migrants. It's just about the money," he said.

Agents have interviewed the survivor, but Salisbury would not identify the man or his nationality, nor reveal the nationalities of any others believed to have been on the vessel.

The rescued man told the Coast Guard he was part of a group of 40 people who left Bimini in the Bahamas, Burdian said. The man said the boat capsized shortly thereafter, and no one aboard was wearing a life jacket, she added.

A small craft advisory had been issued as a severe cold front blew through the dangerous passage on Saturday and Sunday, with winds up to 37km/h and swells up to 3m. Tommy Sewell, a local fishing guide, said there were high winds and fierce rain squalls from Sunday into Monday. 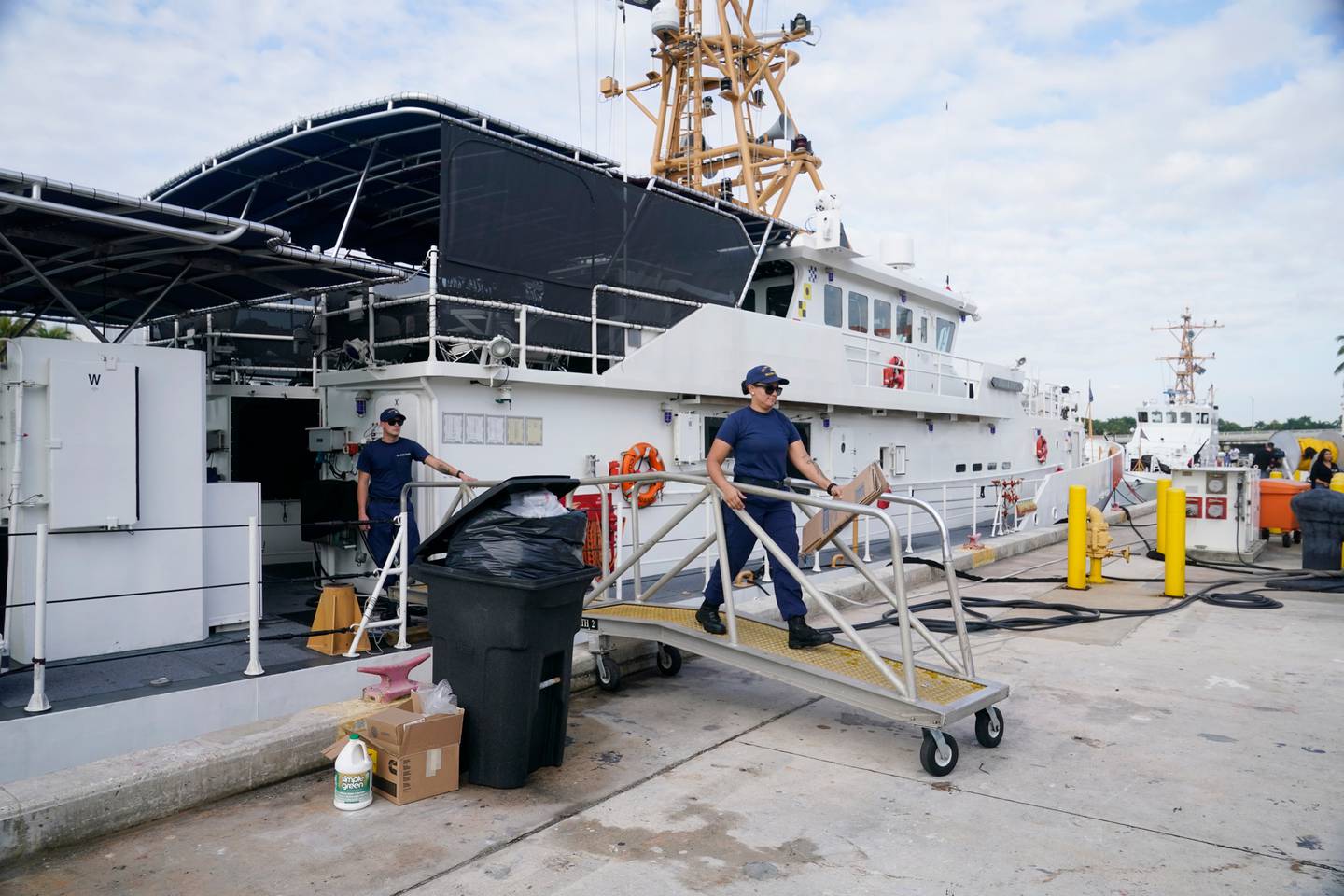 Burdian would not provide any more details, saying he's now in the custody of the Department of Homeland Security.

Bimini is a small cluster of islands about 90km east of Miami and about 160km south of where the survivor was found. The capsized boat was apparently pushed north by the Gulf Stream, a warm, swift current that wraps around the Florida peninsula and flows north along the Atlantic Coast of the United States.

Migrants from around the world have long used the Bahamas as a steppingstone to reach Florida and the United States. They typically try to take advantage of breaks in the weather to make the crossing, but the vessels are often dangerously overloaded and prone to capsizing. There have been thousands of deaths over the years.

For the most part, these migrants are from Haiti and Cuba, but the Royal Bahamas Defence Force has reported apprehending migrants from other parts of the world, including from Colombia and Ecuador earlier this month.

The Bahamas and nearby Turks and Caicos Islands have in recent years stepped up their anti-smuggling enforcement efforts in cooperation with the Coast Guard.

In May, a Canadian man was sentenced in the US to more than two and a half years in prison for his role in an operation that smuggled people from Sri Lanka by plane to Haiti, then by boat to the Turks and Caicos and the Bahamas before heading to South Florida. The case was investigated by the Homeland Security Department, which is also looking into the operation behind the capsized boat.

The Coast Guard constantly patrols the waters around Haiti, the Dominican Republic, Cuba and the Bahamas. On Friday, its crews pulled 88 Haitians from an overloaded sail freighter west of Great Inagua, Bahamas.

Last July, the Coast Guard rescued 13 people after their boat capsized off of Key West as Tropical Storm Elsa approached. The survivors said they left Cuba with 22 people aboard. Nine went missing in the water.

In the fiscal year that ended Sept. 30, the Coast Guard said it apprehended 838 Cubans, 1527 Haitians and 742 people from the Dominican Republic in the region that includes Florida and the Caribbean. The agency also apprehended migrants from other nations, but it did not provide a breakdown of the other nationalities.