The World Health Organisation has finally addressed a new Covid variant first detected late last year, as concern about the latest strain spreads across the globe.

The new strain, dubbed "variant IHU" or B. 1.640.2, was first officially recorded in France last month after patients began falling ill in the Marseilles region in November.

At least 12 cases of variant IHU, which is believed to be linked with travel to the African nation of Cameroon, were confirmed in southern France after being discovered by researchers from the Méditerranée Infection University Hospital Institute (IHU).

The strain has 46 mutations, which experts fear could mean it is more resistant to existing vaccines, although it does not appear to be spreading rapidly, especially when compared with the highly-transmissible Omicron variant which emerged at roughly the same time but has since taken over the globe.

While details of the new strain began to circulate late last year, news of its emergence only made international headlines this week after catching the attention of experts outside of France following the release of a paper on December 29, which is yet to be peer-reviewed.

Now, the WHO has finally spoken out about the variant, with WHO Covid incident manager Abdi Mahamud fronting the press in Geneva, Switzerland on Tuesday.

While he admitted the variant "has been on our radar", Mahamud said it was a positive sign that IHU had not spread rapidly.

"That virus had a lot of chances to pick up."

While IHU is under investigation by the WHO, it will only be declared to be a "variant of concern" if it is found to pose a serious risk.

Other international experts have also weighed in to downplay the risk posed by IHU, with many believing it may have already been crushed by Omicron.

They include Imperial College London virologist Dr Tom Peacock, who was among the first to sound the alarm over the Omicron variant in late 2021.

He explained on Twitter that IHU "actually predates Omicron" and that "in all that time there are exactly 20 sequences [compared to the >120k Omis in less time]", meaning it was likely "not one worth worrying about too much" at the moment.

Testing by French scientists has found IHU carries the N501Y mutation, which was first seen in the Alpha variant and which health experts believe can make the strain more transmissible. 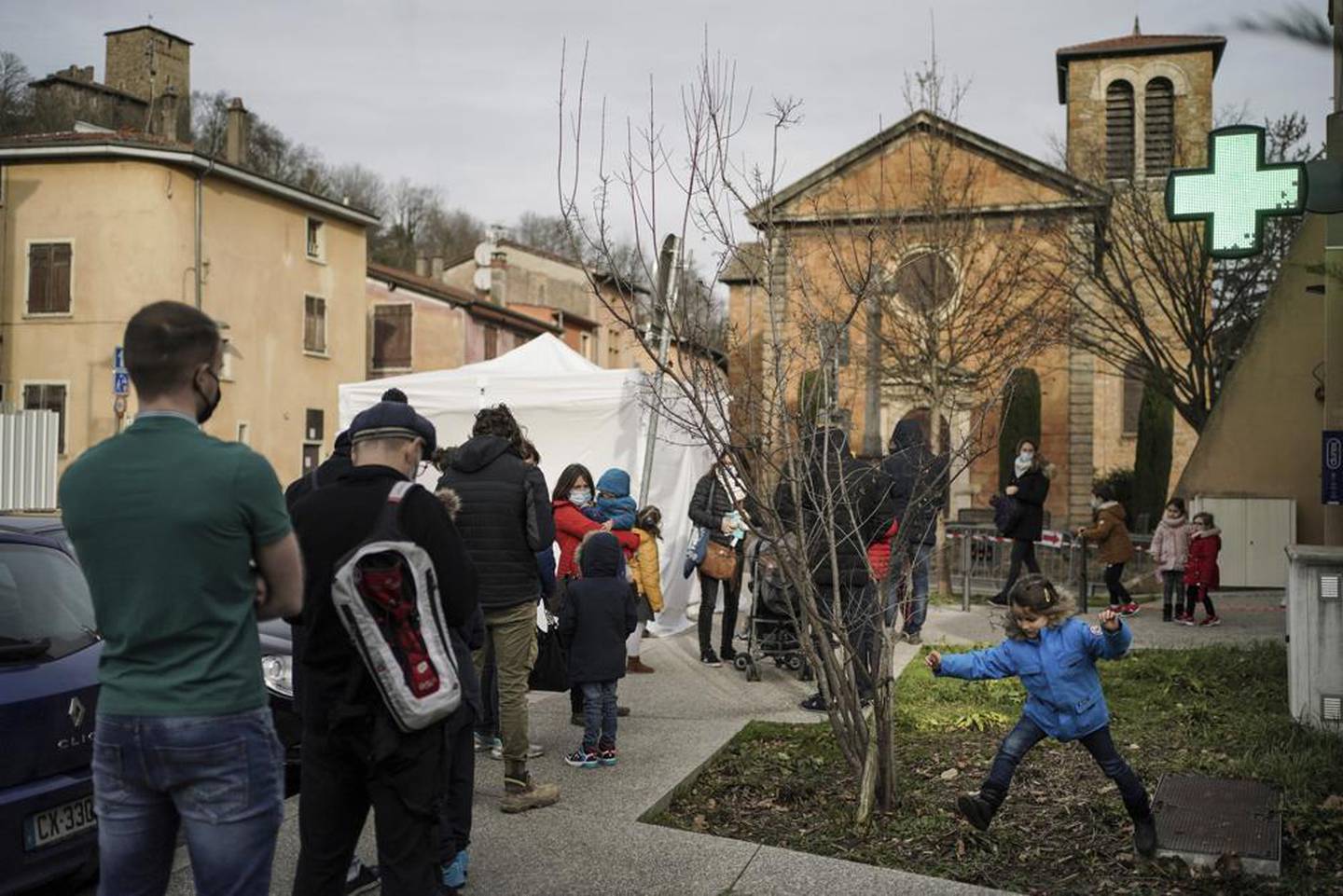 People wait to get a nasal swap at a mobile COVID-19 testing site in Albigny-sur-Saone, outside Lyon, central France, Tuesday, Jan. 4, 2022. Photo / AP

It also carries the E484K mutation, which could potentially mean it is more resistant to vaccines.

In total, IHU has 46 mutations and 37 deletions, with researchers claiming it was "another example of the unpredictability of the emergence of SARS-CoV-2 variants, and of their introduction in a given geographical area from abroad".

The paper claimed the "index case" was a fully-vaccinated man who had returned from a trip to Cameroon in November three days before returning a positive result in France after developing "mild respiratory symptoms" a day earlier.

The emergence of IHU comes as Omicron continues to wreak havoc across the world.

The US has just set a grim new world record after reporting more than one million new Covid cases in a single day on Monday.

A string of nations across Europe have also rolled out new restrictions and harsh crackdowns on the unvaccinated as the continent battles another deadly virus wave.

The situation came to a head in the Netherlands this week, after anti-restriction protesters clashed with police in violent scenes in the capital city of Amsterdam.

More than 4.9 million coronavirus cases were detected over the past week across 52 European nations and territories, making it the continent's worst week since the pandemic began.

Of those, 17 nations have broken new records for most amount of cases in a seven-day period.