Riots have broken out in Shanghai as starving residents begin to revolt against the Chinese Communist Party's draconian "Zero Covid" lockdown more than three weeks in. 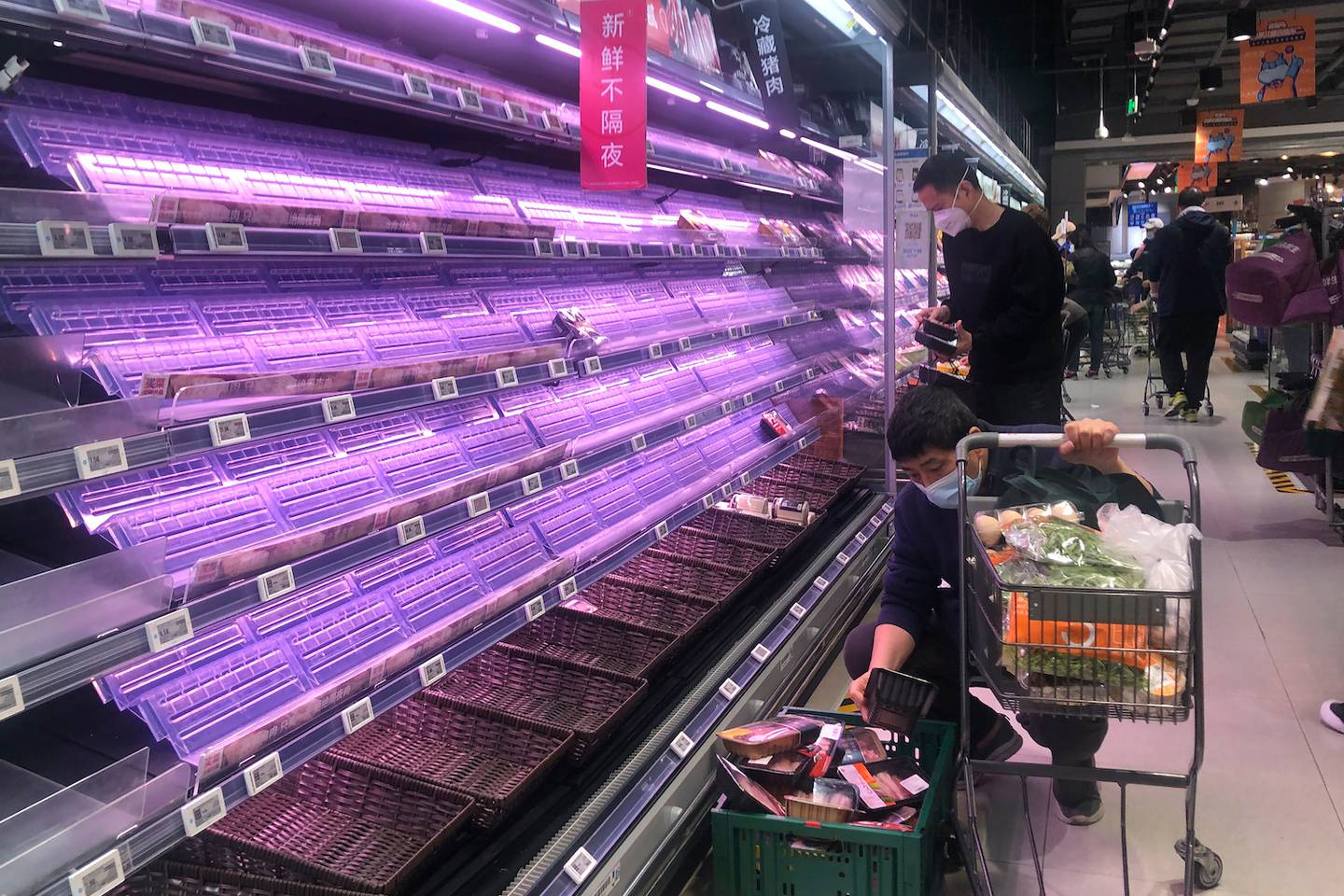 Customers look through empty shelves at a supermarket in Shanghai, China, in late March. Photo / AP

Crowds of residents were seen looting food parcels in one video posted to Weibo, while other clips showed furious mobs clashing with PPE-clad Covid prevention workers as they tried to break through barriers erected across the city.

One video captured the sounds of screaming from apartment balconies as people run out of food, while in another viral clip a man was filmed hurling abuse at an apparent government worker over the phone.

The human cost of this awful lockdown is unfathomable, people are being driven to the brink, the mental health cost is immeasurable, this man sums up how many are feeling at the moment pic.twitter.com/0kBGPwiNEE

"My parents are locked up by you for two months. How did they live for these two months? My grandmother lives alone, nobody takes care of her. You locked us up. What does she drink? What does she eat? You are driving [people] to death. F**k you! Shanghai city government, are they human? Driving ordinary people to revolt ... I don't care anymore. Just let the Communist Party take me. Where is the Communist Party? Where is communism? You bastards!"

More than 23,600 new infections were recorded on Friday despite Shanghai residents now suffering under the harshest Covid-19 restrictions anywhere in the world since the start of the pandemic, straining the regime's policy of total elimination of the virus.

The situation in Shanghai is scary. Reports of millions struggling to feed themselves, elderly unable to access medicine, videos of small riots breaking out circulating on social media. Many households relying on inadequate govt food deliveries. pic.twitter.com/bW1ixaTu7O

What the?? This video taken yesterday in Shanghai, China, by the father of a close friend of mine. She verified its authenticity: People screaming out of their windows after a week of total lockdown, no leaving your apartment for any reason. pic.twitter.com/iHGOO8D8Cz

Day 22 of my Shanghai Covid lockdown

As we feared yesterday, we have new restrictions

Before we were allowed to leave our building (but not community) to get deliveries - no more; now we are not allowed out of our apartment door

Residents have been barred from leaving their homes even for essential items, leaving many warning they are running out of food as shops and delivery services collapse under the pressure and government deliveries of vegetables, meat and eggs struggle to keep up. 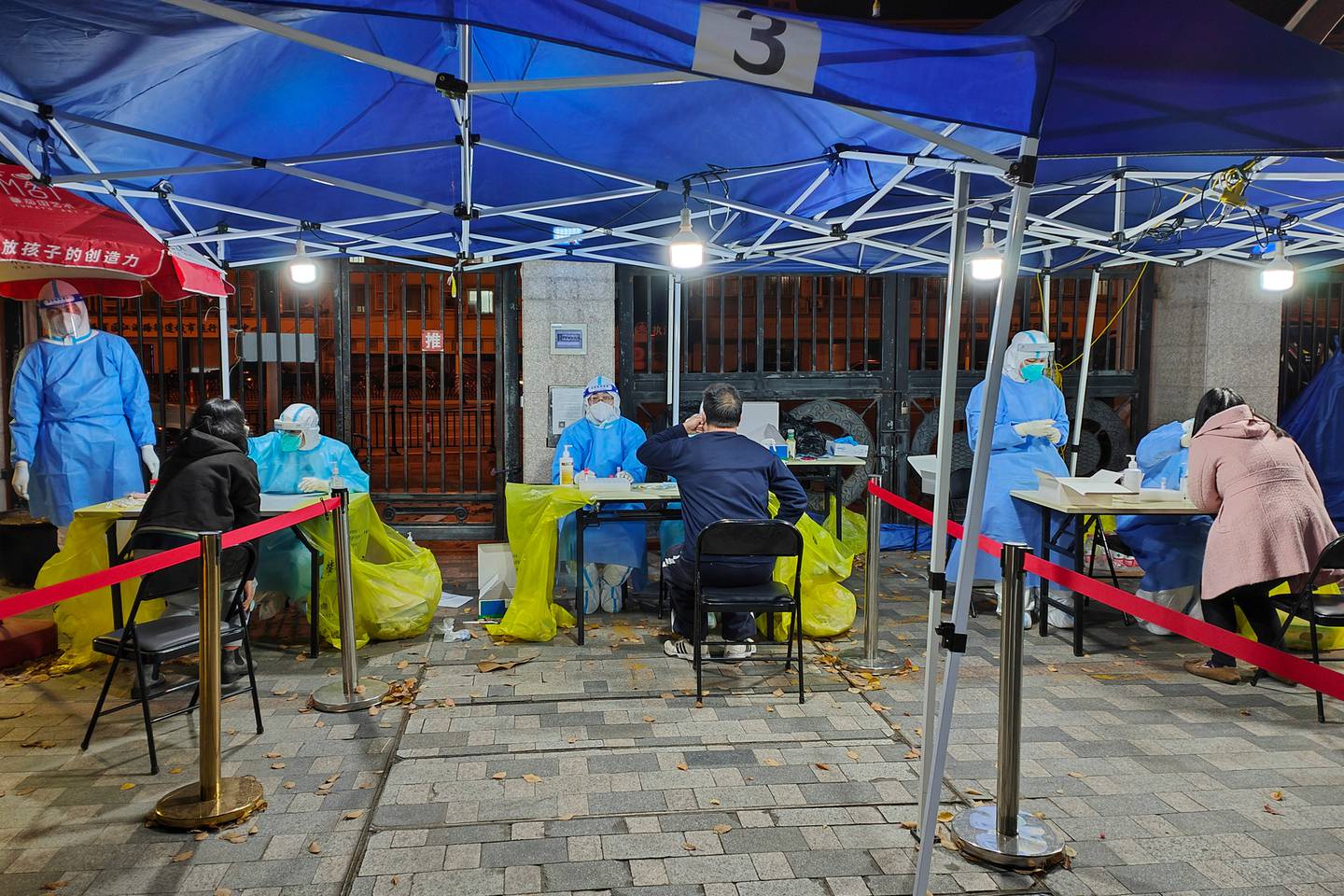 Shanghai residents are barred from leaving their homes in a strict Zero-Covid lockdown. Photo / Getty Images

"It is true there are some difficulties in ensuring the supply of daily necessities," local official Liu Min conceded on Wednesday.

It comes after a government worker was filmed chasing down a Corgi and beating it to death with a shovel because its owner was infected, in a horrifying video that went viral on Weibo.

The owner had released the dog onto the streets because he could not find anyone to care for it while he was in quarantine, China News Weekly reported.

"We hoped to let him outside and be like a stray dog," he wrote on Weibo.

"We didn't want him to starve to death. As long as he could live it would be okay. We never expected that he would be beaten to death the moment we had left."

When Omicron first emerged in Shanghai a month ago only specific buildings and complexes were placed under lockdown, but last week the government announced the city was being divided in two with different restrictions for each half.

On Monday, however, the full lockdown was extended to the entire city's population of 26 million.

The citywide lockdown is indefinite.

"The situation in Shanghai is scary," Michael Smith, North Asia correspondent for The Australian Financial Review, wrote on Twitter.

"Reports of millions struggling to feed themselves, elderly unable to access medicine, videos of small riots breaking out circulating on social media. Many households relying on inadequate government food deliveries. All this to contain a virus the Chinese government claims hasn't killed anyone in the city yet." 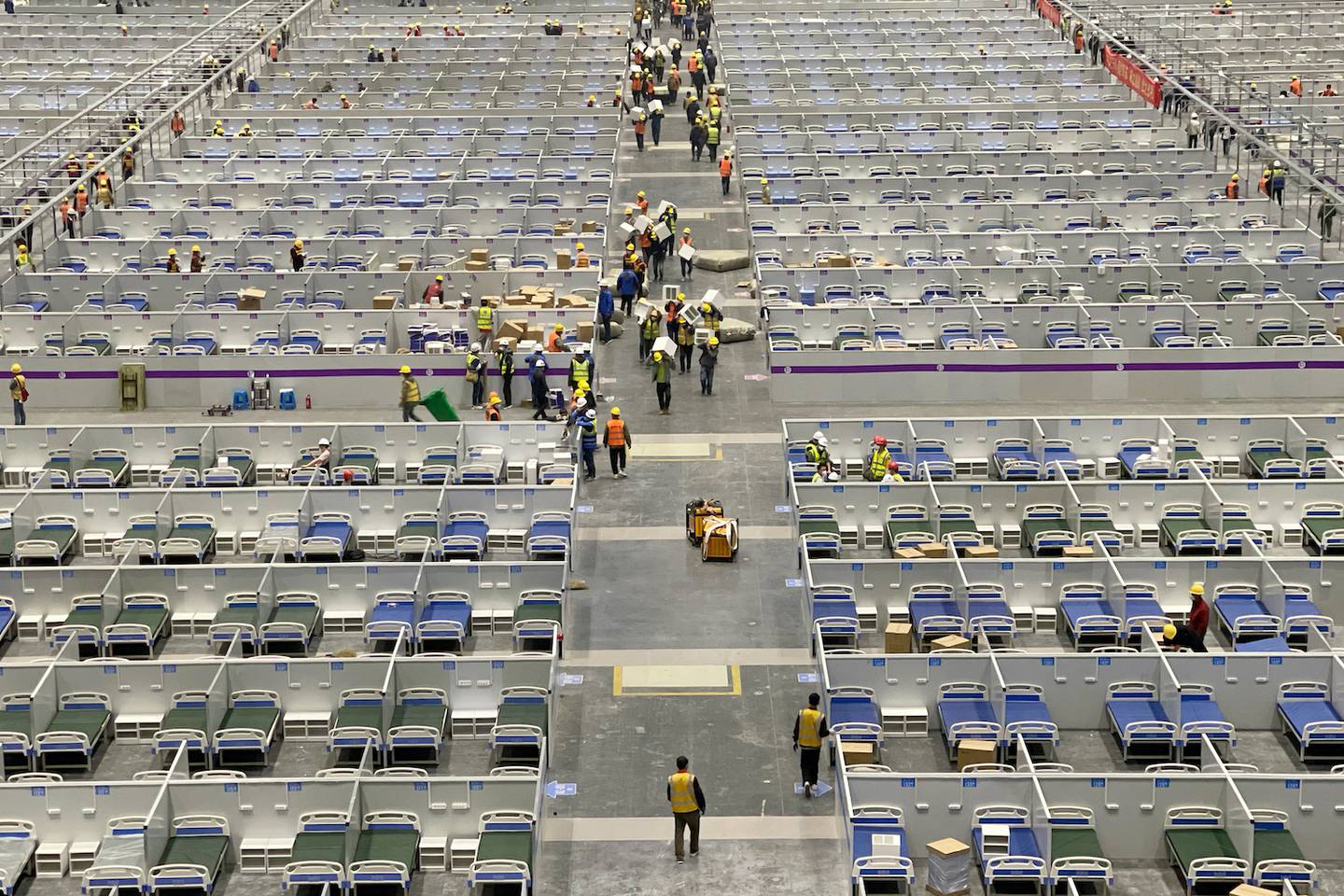 Workers labour at the site of a temporary hospital being constructed at the National Exhibition and Convention Center (Shanghai) in east China's Shanghai. Photo / AP

Mass daily testing is mandatory and anyone who tests positive is taken to a quarantine centre — a policy that even saw children removed from their parents into overcrowded facilities.

Shanghai officials were forced to respond to the public outrage by allowing parents to accompany their Covid-positive children to quarantine.

Jared T Nelson, an American lawyer living in Shanghai, has been sharing updates about the lockdown on Twitter.

He stressed that it was a "huge city" and circumstances were different everywhere.

On Saturday, he said rules for his building had been tightened again. While previously people had been allowed to go outside to get deliveries, residents had now been barred from leaving their apartments.

"Each day two volunteers from each building are allowed out to collect deliveries for the whole building (I'm a volunteer)," he wrote.

"We have to wear the full white suit during the process — mine was just delivered to me — and we only have a two hour window in the afternoon. If you have a delivery in the morning, for example of meat (if you are lucky enough to get that), it will sit at the gate until it is our time in the afternoon to get the delivery. The temperature in Shanghai right now, at 5pm, is 80F [27C]."

He added, "For my family, we had three deliveries that were booked to deliver today: two group purchases of meat/seafood plus one individual purchase of soap and shampoo. All three were cancelled."

Nelson said that on Friday night, several Covid-positive people from his community had been taken to a quarantine centre.

"From what we've heard, they didn't arrive until 2am and the conditions there are awful — no showers, portable toilets only, no hot water, and of course no privacy," he wrote.

China is one of the few nations still persisting with a zero Covid strategy, even though its full vaccination rate is approaching 90 per cent.

Other parts of China have been subjected to similar restrictions in the past month, including Shenzhen, Changchun, Xuzhou, Tangshan and Jilin. At one point in March, almost 40 million Chinese residents were under various levels of lockdown, according to CNN.

The US State Department on Friday said it was allowing non-emergency staff and their families to leave the Shanghai consulate due to the situation, while advising US citizens to reconsider travel to China "due to arbitrary enforcement of local laws and Covid-19 restrictions".

Australia's Department of Foreign Affairs and Trade says while it is not saying "don't go", Australians should "exercise a high degree of caution".

"Recent Covid-19 outbreaks in Shanghai and other large cities have resulted in city-wide residential lockdowns, closures of schools, businesses and suspension of public transport," DFAT says in its latest travel advisory.

"Access to medical facilities and other essential services has also been disrupted. Further Covid-19 outbreaks throughout China are possible and countermeasures including flight suspensions and re-routing, and mass testing may be imposed with little or no warning. Stay informed of local conditions, particularly if you intend to travel within China."