Australians have been warned to prepare themselves for the likely event they'll soon be infected with Covid-19, as a large Omicron-fuelled spike in case numbers is predicted in coming weeks.

In an update today, Australia's deputy chief medical officer Michael Kidd said it was "likely that many of us will test positive for Covid-19 over the coming days and weeks" as case numbers continued to surge.

Health experts and officials have increasingly suggested the actual case numbers across the nation are magnitudes higher than currently reported, as demand for both PCR and rapid antigen test kits continue to stretch the country's resources.

Screening carried out by health authorities in Victoria have shown that around 80 per cent of new cases were the Omicron variant.

University of Melbourne epidemiologist and public health medicine specialist Tony Blakely estimated last week that Australia's Covid-19 infections could be as much as five to 10 times higher than the current daily confirmed cases.

Speaking to The Sydney Morning Herald, Blakely said if the confirmed infections reached 50,000 a day, the real figure would likely be between 250,000 and 500,000 actual infections each day.

Cases per day are now almost double that, with the combined numbers from the state and territories now pushing 100,000 every 24 hours.

"It's only going to take about three weeks at those sorts of numbers before 40, 50, 60 per cent of the population has been infected, and the virus will run out of steam," he said.

Kidd urged all Australians to be prepared for any potential infections by having paracetamol or ibuprofen at hand to manage fevers and mild aches or pains.

"It's important to be prepared, because you won't be able to go to your supermarket or pharmacy if you're diagnosed," he said. "If you are feeling abnormally weak or tired you may have moderate symptoms and need to seek medical advice." New South Wales today reported 20,293 new cases of Covid-19, forcing those people to join more than 230,000 others in isolation.

The state also reported 18 new deaths in its deadliest day of the pandemic, even as it relaxed rules to allow some essential workers in isolation to return to work if they are asymptomatic.

"Critical workers in the food logistics and manufacturing sectors furloughed as close contacts will be permitted to leave self-isolation to attend work if they have no symptoms of Covid-19, to ensure the state has continued access to essential goods," NSW Health said in a statement on Sunday.

The workers can only leave self-isolation if their employer decides their absence poses a high risk of disruption to the delivery of critical services and if they are not able to work from home.

Shoppers have reported empty shelves in many supermarkets because of the Omicron outbreak's impact on food processing and supply chains.

Returning workers will have to wear masks and comply with risk-management strategies required by their employers, including daily rapid antigen tests. If they test positive, they will have to return to isolation.

New infections in NSW are expected to peak in the third or fourth week of January before they begin to decline next month, according to government modelling.

The state's hospitals remain under significant pressure with high numbers of hospitalisations and the loss of many medical staff to Covid-19 isolation requirements. 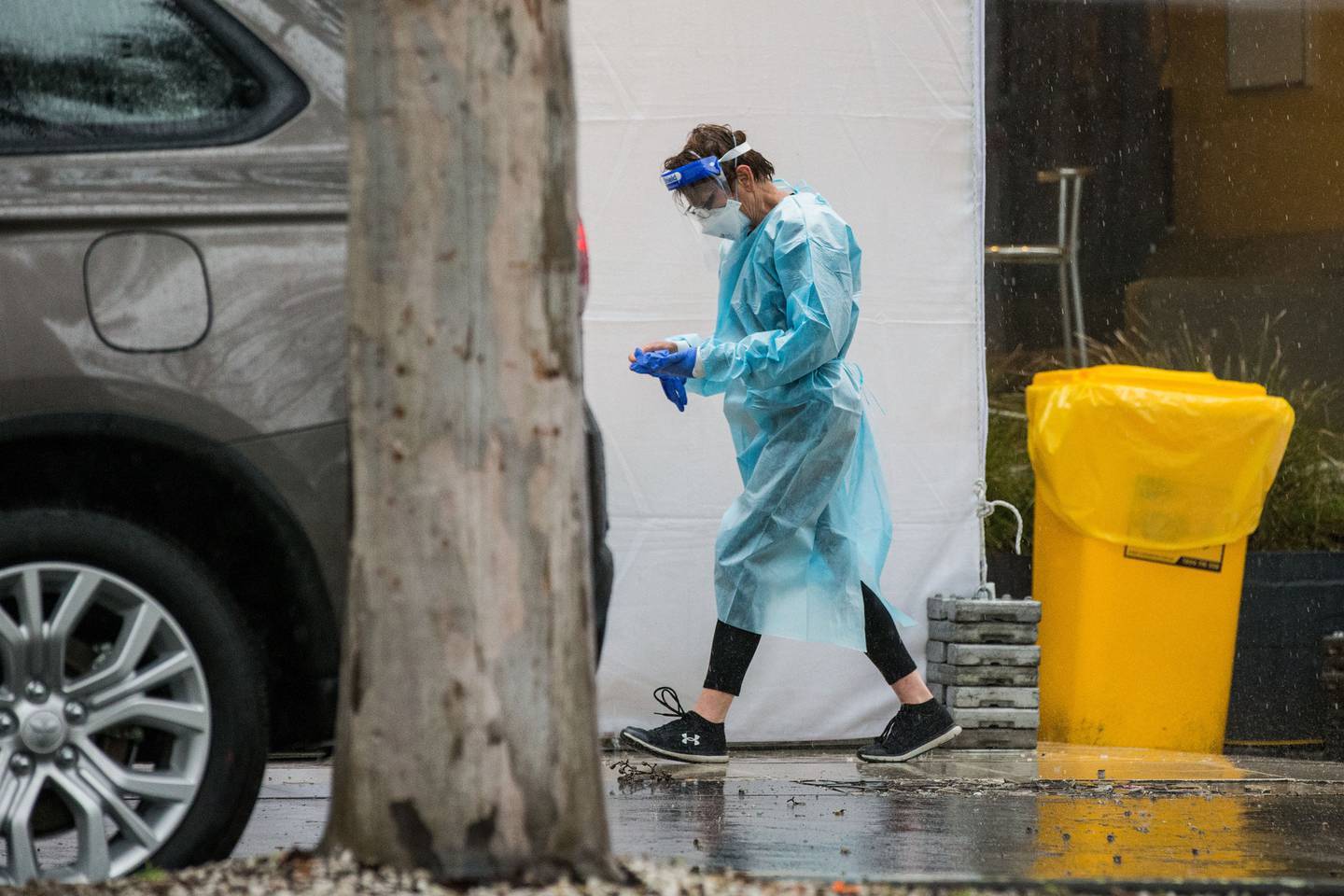 Screening carried out by health authorities in Victoria have shown that around 80 per cent of new cases were the Omicron variant. Photo / Getty Images

The health department said 118 people were in ICU which included both active cases and those who have been cleared of the virus – 28 of those people were ventilated.

About half of the new cases came from rapid antigen tests, which are recorded online, and the rest from traditional PCR testing.

People in Victoria who test at home using RAT tests are required to report positive cases to health authorities by phone or through a new online system.

A similar system will begin in NSW this week, and the state's daily Covid-19 numbers are expected to rise once residents are able to log their RAT results.

- by Natalie Brown, news.com.au with additional reporting from AP