New South Wales has recorded 170 new community cases of Covid-19, with at least 42 of those cases infectious while in the community.

While case numbers have dropped, NSW Premier Gladys Berejiklian said there was still a number of key concerns, particularly with the number of people who continue to circulate in the community while infectious.

"Obviously that is the number we need to see come down," she said.

There have been 2980 community cases reported since June 16, when the first case in the Sydney outbreak was reported.

To the residents that continue to violate lockdown rules, Berejiklian said: "you could be taking the disease home and passing it on to your parents, your siblings, your brothers and sisters or anybody you might have limited contact with. Do not give those you love the most a death sentence."

There are currently 187 Covid-19 cases admitted to hospital, with 58 people in intensive care, 24 of whom require ventilation.

With more anti-lockdown protests planned in Sydney over the weekend, NSW Police Commissioner Mick Fuller said the police would be prepared.

"Please don't come into Sydney tomorrow to protest," he said. "If you do, you will be met by up to 1000 police who will be ready to deal with you, whether that be via the health orders or other laws."

There are growing concerns that current restrictions across Greater Sydney are not tight enough to bring down case numbers.

The government is persisting with a targeted approach, introducing new restrictions on Thursday in eight local government areas, a strategy that experts point out did not work when Victoria attempted it during its second wave last year.

Until now, NSW's nuanced approach to coronavirus outbreaks has helped to keep most of Sydney's businesses open, but the Delta variant has defied increasingly tighter restrictions and is now highlighting the gaps in compliance among residents.

On Wednesday, authorities revealed 45 of 50 people who attended an illegal funeral service in western Sydney tested positive to Covid-19. Rules currently limit funerals to a maximum of 10 people.

Berejiklian said the state could not afford any more setbacks or exceptions if Greater Sydney was to come out of lockdown in four weeks.

"One setback has a ripple effect which can take weeks to get out of." 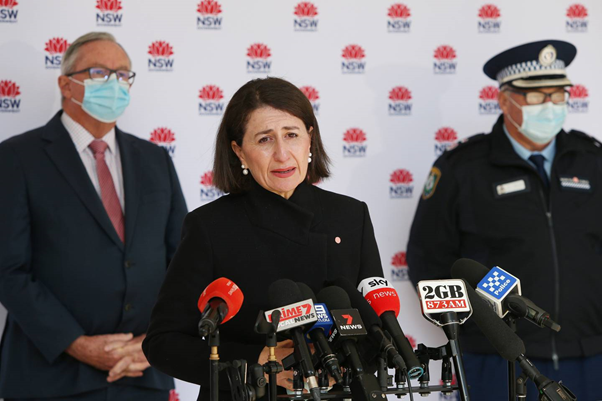 She announced fines for not wearing a mask would increase from A$200 to A$500, and said police will be given more powers to shut down businesses, construction sites and public premises if there was a risk to public health.

NSW Police Commissioner Michael Fuller said officers would perform an extra 1000 shifts throughout the next week, with thousands to be deployed on compliance and other checks. Support from 300 Defence troops has also been requested.

"The challenge is that the Delta variant is probably exposing some of the noncompliance, where the previous viruses hadn't," Fuller told reporters.

Health policy expert Bill Bowtell has warned that the new restrictions in place across Sydney would still not be enough to suppress the Delta strain.

"A lot more has to be done," he told 7 News. "There's no way out of this by vaccinations in four weeks or four months - it's what happens in the next four days. It's absolutely critical to return Sydney to zero [cases] soon."

Berejiklian has already flagged that cases will likely go up before they come down, due to the high number of cases that have been infectious while in the community.

On Thursday, at least 88 of the record 239 cases had been infectious while in the community, with another 70 cases still under investigation.

New targeted restrictions on eight local government areas were announced on Thursday, including a 5km limit and the mandated use of masks outside the home. Other areas of Sydney have a 10km limit and only have to wear masks outdoors in certain circumstances.

"It is very challenging and difficult to manage outbreaks locally and it spreads to larger areas within the metropolitan area," Covid-19 modeller Professor Prokopenko said.

"Melbourne tried it last year and a hard lesson was learned."

Victoria initially tried to contain its second wave through local lockdowns of 10 Melbourne postcodes, adding a number of regional areas about a month later. But days after that it was forced to introduce a Stage 4 lockdown across metropolitan Melbourne and Stage 3 restrictions in regional areas.

Statewide lockdowns are a tactic Victoria has continued to deploy, including in its most recent Delta lockdown that managed to bring cases under control within two weeks.

Prokopenko is not hopeful cases in Sydney can be contained within the eight local government areas being targeted but does not rule it out, saying "it could still happen".

However, he believes it would be better for tighter restrictions to be introduced across the entire Greater Sydney region.

"What we need to do is to be consistent and thorough, with very stringent measures applied comprehensively throughout the metropolitan area.

"We need to break this growth and to do that we need to be harsh and comprehensive."