It has been a month since the UK's controversial Freedom Day when the Boris Johnson-led Conservative government threw open the doors despite thousands of daily cases and 4000 scientists urging them not to.

Driven by high vaccination rates, rules were cast aside in favour of reigniting the economy. Sports stadiums reopened to maximum capacity, as did nightclubs. Mandatory mask rules were left behind, too.

More than 4200 scientists from across numerous fields wrote a letter to the Lancet medical journal warning about the "dangerous and premature" decision that was being made.

"The UK Government must reconsider its current strategy and take urgent steps to protect the public, including children. We believe the government is embarking on a dangerous and unethical experiment, and we call on it to pause plans to abandon mitigations on July 19, 2021," they wrote.

"Instead, the government should delay complete reopening until everyone, including adolescents, have been offered vaccination and uptake is high, and until mitigation measures, especially adequate ventilation and spacing are in place in schools.

"Until then, public health measures must include those called for by WHO (universal mask wearing in indoor spaces, even for those vaccinated)."

One month on – and as Australia eyes a similar relaxing of rules when states reach 80 per cent of the population receiving two Covid-19 vaccines – some results are in.

More than 800 patients are ending up hospital with Covid-19 every day and roughly 90 people are dying from the virus.

Good vaccination coverage means that number is well below the peak of the pandemic in the UK where the death rate topped 1300 a day.

Kit Yates, co-director of the Centre for Mathematical Biology at the University of Bath, told CNN countries like Australia should be careful about following the UK strategy blindly.

"If there was one lesson I wish other countries would take from watching the UK's attempt to reopen is that vaccines are not the whole solution to the problem," Yates said.

"Yes, they make a huge difference, but if you want to keep on top of this disease then you need to back vaccines up with other tried and tested public health measures: Mask mandates in indoor public spaces, ventilation in schools and work places, a functioning, locally-driven test, trace and isolate system in combination with support for isolation."

Pleasingly, reopening did not lead to a spike in reported coronavirus cases. In fact, there was a drop in the days after Freedom Day that left epidemiologists scratching their heads.

"Scientists are scratching their heads over the precipitous decline in daily Covid-19 infections in the United Kingdom following their rapid rise earlier in the year. Officially recorded new cases more than halved in just 2 weeks: from a high of 54,674 on 17 July to 22,287 on 2 August," the article read.

The number of cases have slowly crept back up again. But with 75 per cent of the adult population now vaccinated, deaths have remained steady.

Results are also in from other aspects of the UK recovery. 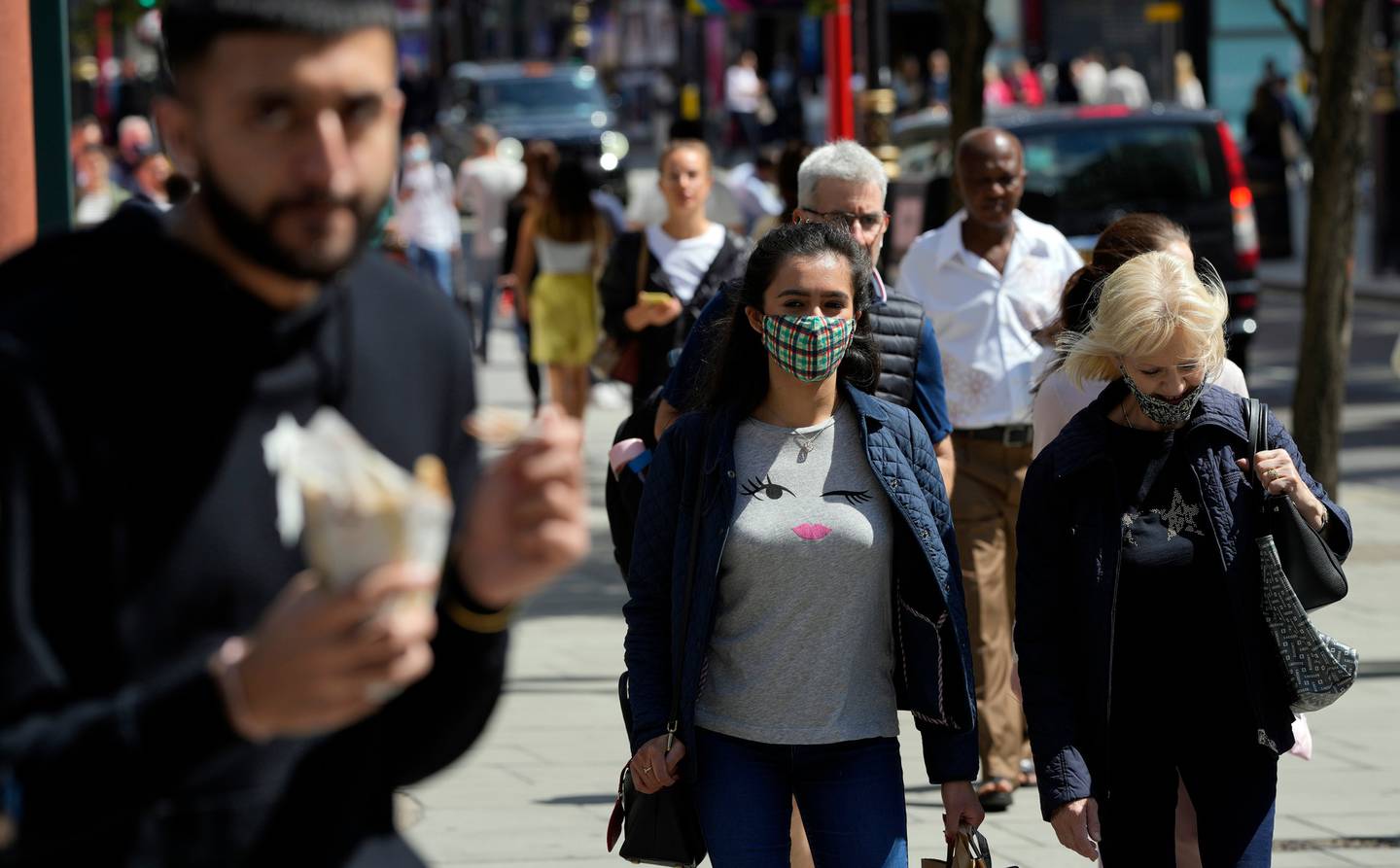 Two women walk along Oxford Street while wearing a face mask against the coronavirus in London on August 6. Photo / AP

The Consumer Prices Index stood at 2.0 per cent in July, the Office for National Statistics said in a statement.

The rate had soared in June to a near three-year peak of 2.5 per cent as prices had accelerated on easing coronavirus restrictions.

Inflation has been propelled higher since March when the UK government began a phased lifting of coronavirus restrictions.

Britain's unemployment rate dipped in the second quarter on reopening of the economy that has resulted in record-high vacancies, official data showed Tuesday.

While the number of payroll employees has surged, it remains below the pre-pandemic total, the Office for National Statistics added.