New South Wales has recorded 587 new local cases of Covid-19 as the state prepares for an easing of lockdown restrictions.

More than 70 per cent of eligible residents aged 16 and older are now fully vaccinated against the virus, triggering an easing of restrictions from Monday under the state's roadmap out of lockdown.

Once the 80 per cent target is reached - likely to be next week - there will be another wave of eased restrictions.

Sydney has been locked down since mid-June after the first case of Delta emerged in the Bondi area. It has since spread across the city and to the regions triggering several snap lockdowns.

NSW Premier Dominic Perrottet this morning announced the restrictions that will ease from Monday for vaccinated residents will include:

A number of changes have also been made to the 80 per cent reopening plan, including:

"But ultimately, as you say, they're an impediment for people going back into the office, so we made some changes."

Victoria's roadmap out of lockdown remains "on track" despite record-high cases in recent days, according to a leading professor from the Burnet Institute.

Earlier this week the state broke a record for the highest ever daily cases in Australia, with 1763 infections reported.

But despite the high numbers, the Burnet Institute's Mark Stoove said the state was still on its path towards reopening.

"The numbers that have been coming through over the last week or so have been high and they've been stabilising between 1000 and 1500," Stoove told 9 News.

"But it is well within the bounds of our modelling. I don't see any reason why the government would want to change its roadmap at the moment."

Of the eligible population in Victoria, 54.5 per cent are fully vaccinated and 83.6 per cent have had their first dose. 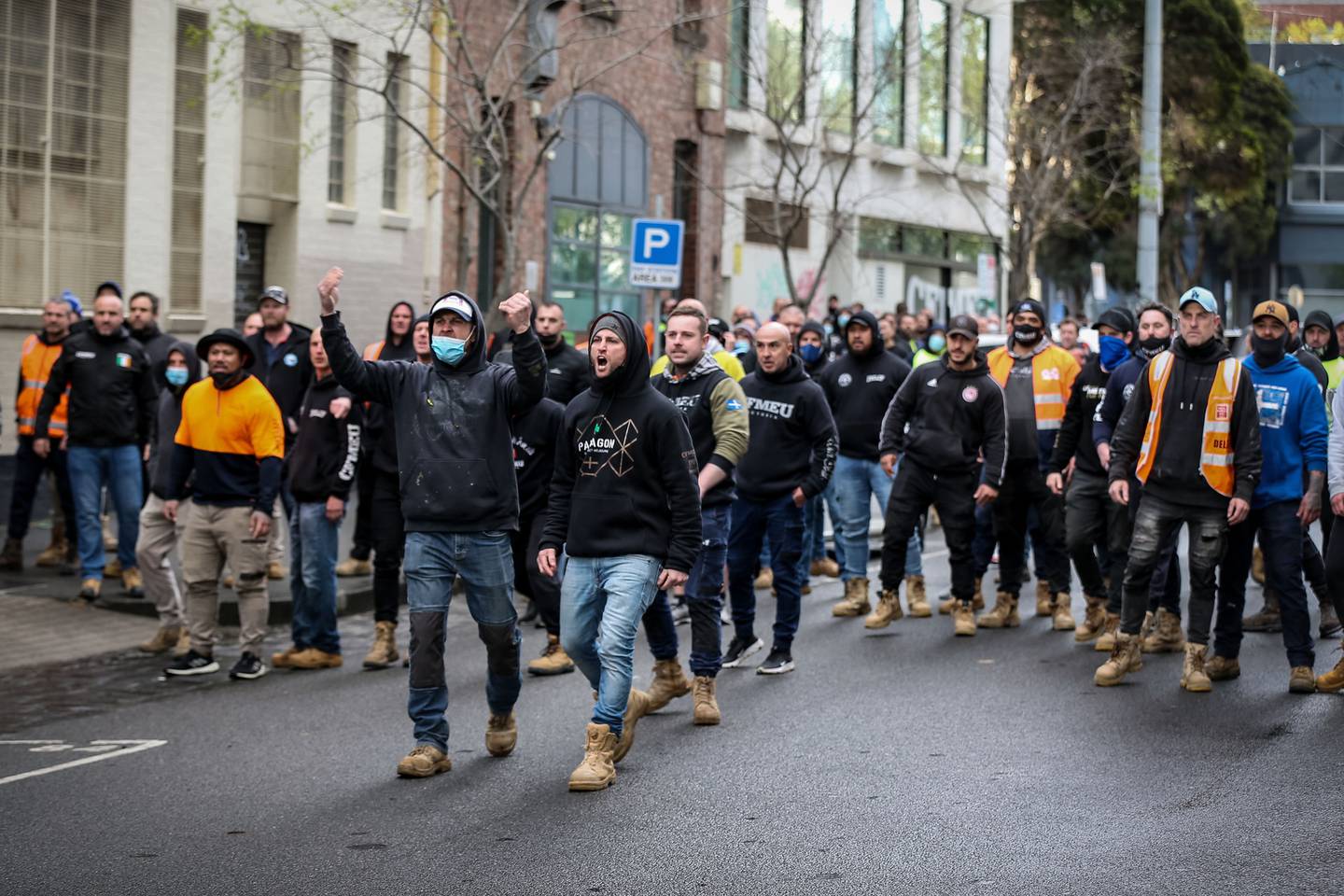 Melbourne has been plagued by anti-lockdown protests in recent weeks. Photo / Getty Images

Victoria on Wednesday announced it would roll out rapid antigen testing in the state's healthcare settings.

More than 500 people are in Victorian hospitals with Covid, with 101 in intensive care and 66 on a ventilator.

Unvaxxed to be given $750 weekly payment

Unvaccinated Victorians who ignore the state's jab mandates will be able to claim hundreds of dollars in government payments if they are sacked for not following the rules.

From October 15, all workers on Victoria's Authorised Worker list will be required to have their first Covid vaccine dose in order to continue working onsite. They will need to be fully vaccinated by November 26.

This list includes thousands of different workers, from firefighters and police officers, to taxi drivers and actors.

The Herald Sun has revealed that workers who are stood down for not complying with the mandate will be eligible to claim Victoria's Covid-19 disaster payment, which is A$750 for those who lose more than 20 hours of work a week and A$450 for those who lose between eight and 20 hours.

A spokesperson for Emergency Management Minister Bridget McKenzie told the publication that the payments were "available to people who live or work in a commonwealth declared hot spot subject to a movement restriction and have reduced hours of work".

"If a person is temporarily stood down, they may be eligible for Covid-19 disaster payment if they meet the eligibility criteria," he said.

The Federal government payments will be available until 80 per cent of Victorians are fully vaccinated and when then be phased out over a two-week period.