Māori climate activist India Logan-Riley gave a rousing speech at the opening of the United Nations climate summit in Glasgow earlier today - and had a stark warning for world leaders listening to them.

Logan-Riley, who introduced themselves on stage in Glasgow in te reo Māori, has told G-20 leaders, in no uncertain terms, that it is imperative that they listen to young indigenous peoples and support their fight for a better future.

The activist says climate change issues are rooted in colonialism and we must move away from modern-day forms of it.

They demand that world leaders listen to indigenous peoples, who have been fighting against resource exploitation and corporate greed and have offered real solution to climate issues.

Condemning colonialism, Logan-Riley pointed out they come from a place where land "was stolen by the British crown".

Logan-Riley said the roots of the climate crisis began with imperialist and colonisation by Western countries and reminded British leader Boris Johnson of the colonial crimes committed against subject peoples, including those in Aotearoa.

"Two-hundred-fifty-two years ago invading forces sent by the ancestors of this presidency arrived at my ancestors' territories, heralding an age of violence, murder and destruction enabled by documents, like the Document of Discovery, formulated in Europe.

"Land in my region was stolen by the British Crown in order to extract oil and suck the land of all its nutrients while seeking to displace people.

"These historic forces continue to shape my life and have brought me here," they added.

The activist says that those same forces remain at play in Aotearoa, mentioning the "theft of the foreshore and seabed".

"I am the same age as these negotiations," Logan-Riley said, frustrated at the number of times her speeches have been applauded by world leaders at summits like this one, but no real action was taken by those in power.

"I have grown up, graduated, fallen in love, fallen out of love, started and changed a couple of careers, all while the global north, colonial governments and corporations fudged with the future," they said.

The Māori activist has called on world leaders to listen to indigenous peoples.

"We're keeping fossil fuels in the ground and stopping fossil fuel expansion. We're halting infrastructure that would increase emissions and saying no to false solutions," they said.

"In the US and Canada alone indigenous resistance has stopped or delayed greenhouse gas pollution equivalent to at least one quarter of annual emissions. What we do works," Logan-Riley added.

"I cannot put it more simply than we know what we are doing, and if you are not willing to back us or let us lead, than you are complicit in the death and destruction that's happening across the globe. Land back, oceans back."

"This is an invitation to you. This COP, learn our histories, listen to our stories, honour our knowledge and get in line, or get out of the way.

"Kia ora, thank you," they concluded.

'If Glasgow fails then the whole thing fails'

Logan-Riley's message was blunt and to the point, but G-20 leaders have yet to commit to any solid targets.

In fact, AP reports G-20 leaders offered more vague pledges than commitments of firm action, saying they would seek carbon neutrality "by or around mid-century".

They also agreed to end public financing for coal-fired power generation abroad, but set no target for phasing out coal domestically — a clear nod to China and India.

The G-20 countries represent more than three-quarters of the world's climate-damaging emissions and G-20 host Italy and Britain, which is hosting the Glasgow conference, had looked for more ambitious targets coming out of Rome.

But major polluters including China and Russia had already made clear they had no immediate intention of following US and European pledges to zero out all fossil-fuel pollution by 2050. Russia said on Sunday that it was sticking to its target of 2060.

Speaking to reporters before leaving Rome, US President Joe Biden called it "disappointing" that G-20 members Russia and China "basically didn't show up" with commitments to address the scourge of climate change ahead of the UN climate summit.

British Prime Minister Boris Johnson struck a grim tone, saying G-20 leaders "inched forward" on curbing global warming, but the goal of limiting temperature rise to 1.5C - struck in a landmark deal at the end of the 2015 Paris climate accord - was in danger of slipping out of reach.

"If Glasgow fails then the whole thing fails," Johnson told reporters in Rome.

"This weak statement from the G-20 is what happens when developing countries who are bearing the full force of the climate crisis are shut out of the room," said Mohamed Adow, director of Power Shift Africa. "The world's biggest economies comprehensively failed to put climate change on the top of the agenda ahead of COP26 in Glasgow."

While the opening ceremony in Glasgow formally kicked off the talks, known as COP26, the more anticipated launch comes on Monday (local time), when leaders from around the world will gather to lay out their countries' efforts to curb emissions from burning coal, gas and oil and deal with the mounting damage from climate change.

The leaders of two of the top climate-polluting nations - China and Russia — were not expected to attend the summit, though seniors officials from those countries planned to participate. Biden, whose country is the world's biggest climate polluter after China, the summit comes at a time when division within his own Democratic party is forcing him to scale back ambitious climate efforts.

At the Vatican Sunday, Pope Francis urged the crowds gathered in St Peter's Square: "Let us pray so that the cry of the Earth and the cry of the poor" is heard by summit participants.

Negotiators will push nations to ratchet up their efforts to keep global temperatures from rising by more than 1.5C this century compared with pre-industrial times. 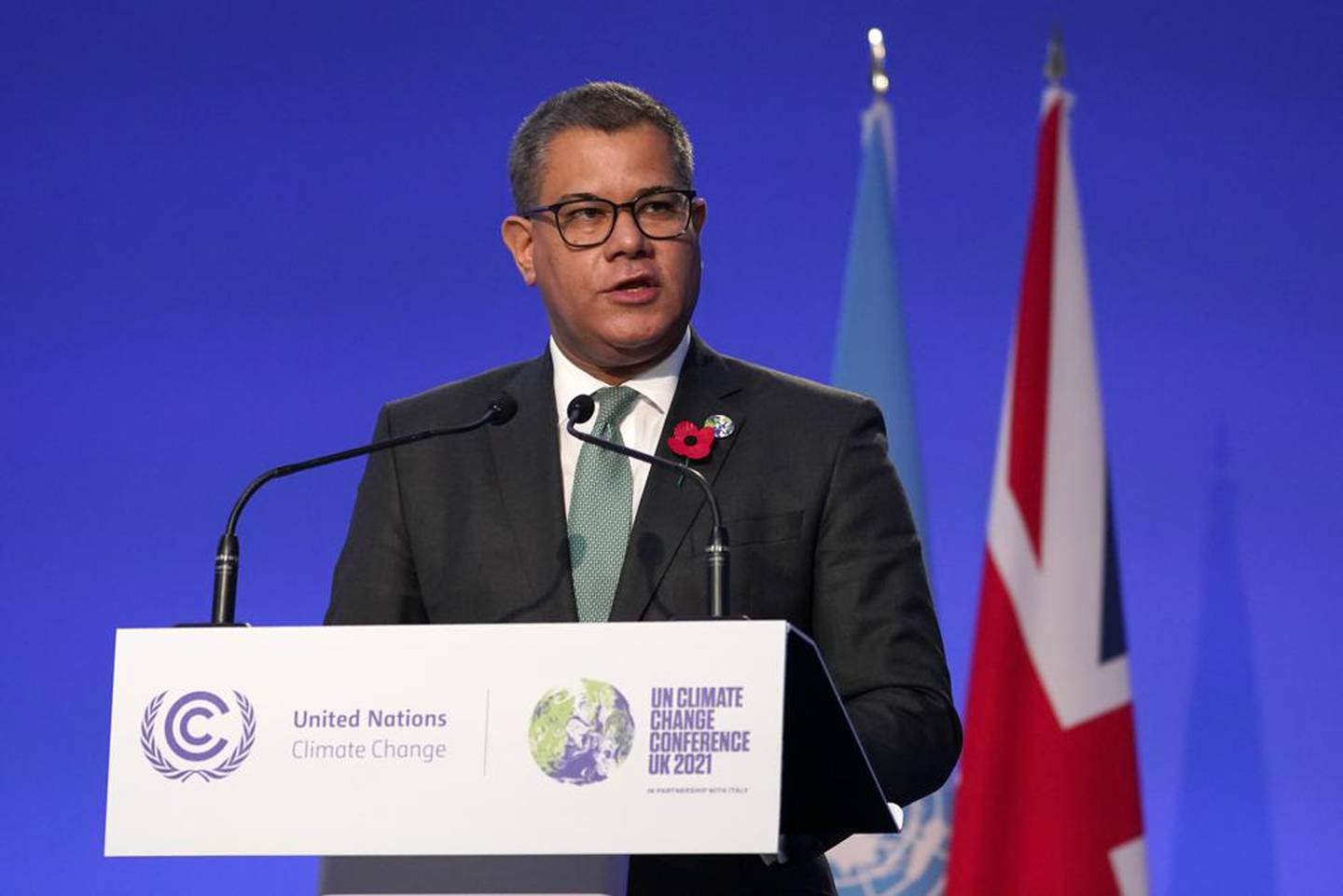 Alok Sharma President of the COP26 summit speaks during the Procedural Opening of the COP26 UN Climate Summit in Glasgow, Scotland. Photo / AP

Scientists say the chances of meeting that goal are slowly slipping away. The world has already warmed by more than 1.1C and current projections based on planned emissions cuts over the next decade are for it to hit 2.7C by the year 2100.