Beijing is further tightening its fist around Taiwan – insisting that international law does not apply to the Taiwan Strait.

This is despite China being a signatory to criteria established under the International Convention on the Law of the Sea (UNCLOS), which says it is.

Washington is not a signatory to the convention. But it asserts its validity as part of an international "rules-based order".

But the 160km-wide waterway has been used for commercial shipping and naval movements for centuries.

It's a vital highway for Japanese and South Korean tankers and cargo ships. And the US deliberately sends its warships there as part of its "freedom of navigation" campaign in the region. 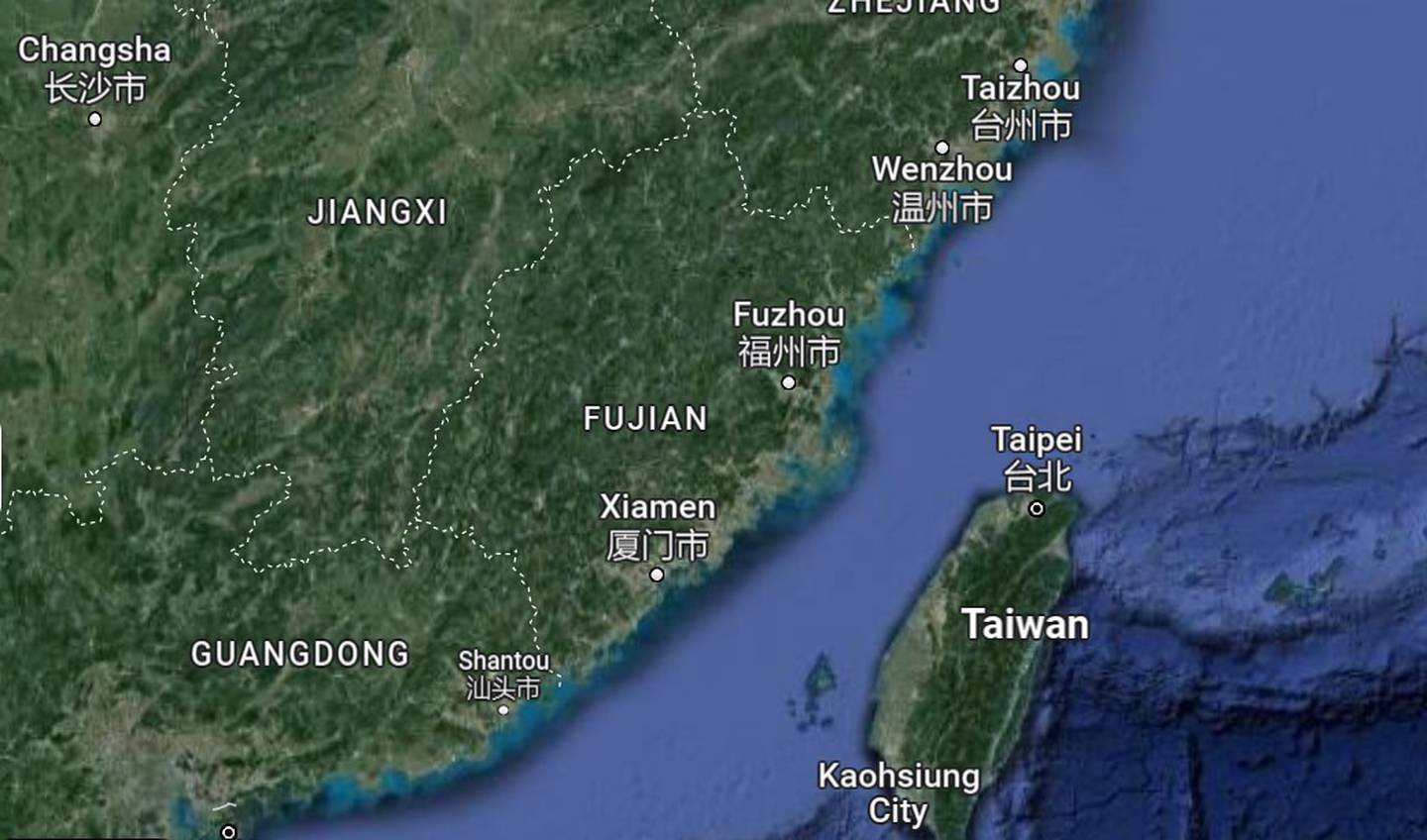 The Taiwan Strait is a waterway between the island and mainland China. Photo / Google

Beijing has long claimed it as part of its exclusive economic zone (EEZ) – as defined under UNCLOS. But it has attempted to reinterpret economic activities as including military movements.

Now it has changed tack.

But China's Chairman Xi Jinping has just signed into law a similar power to that exercised by Russian President Vladimir Putin over Ukraine.

It allows "special military operations" to not constitute formal war. And that means Beijing may be preparing to dramatically increase its aggressive behaviour in the East and South China Seas – and around Taiwan.

On Tuesday, Wenbin declared Beijing "has sovereignty, sovereign rights and jurisdiction over the Taiwan Strait".

"It is a false claim when certain countries call the Taiwan Strait 'international waters' in order to find a pretext for manipulating issues related to Taiwan and threatening China's sovereignty and security," he said.

Technically, he's both correct – and wrong.

There is no UNCLOS definition for "international waters". But there are ones for territorial waters.

UNCLOS allows all countries to claim an area extending 22km from the coast as sovereign territory. They can also claim out to 370km as an exclusive economic zone which allows international access for all purposes except financial gain (such as fishing or mining).

The Taiwan Strait is 160km at its narrowest point, allowing a 116km wide path for international shipping and aircraft use.

Under UNCLOS, this would apply even if the same country occupied both sides of the strait.

However, the Taiwan Strait is a heavily militarised "front line".

It has been the scene of confrontation ever since the Communist Party seized control of the Chinese mainland in 1949. The Republic of China's government fled to Taiwan.

Ever since, US warships – and those of other nations, including Australia, Britain and Canada – have sailed through the strait to reiterate its international waterway status. 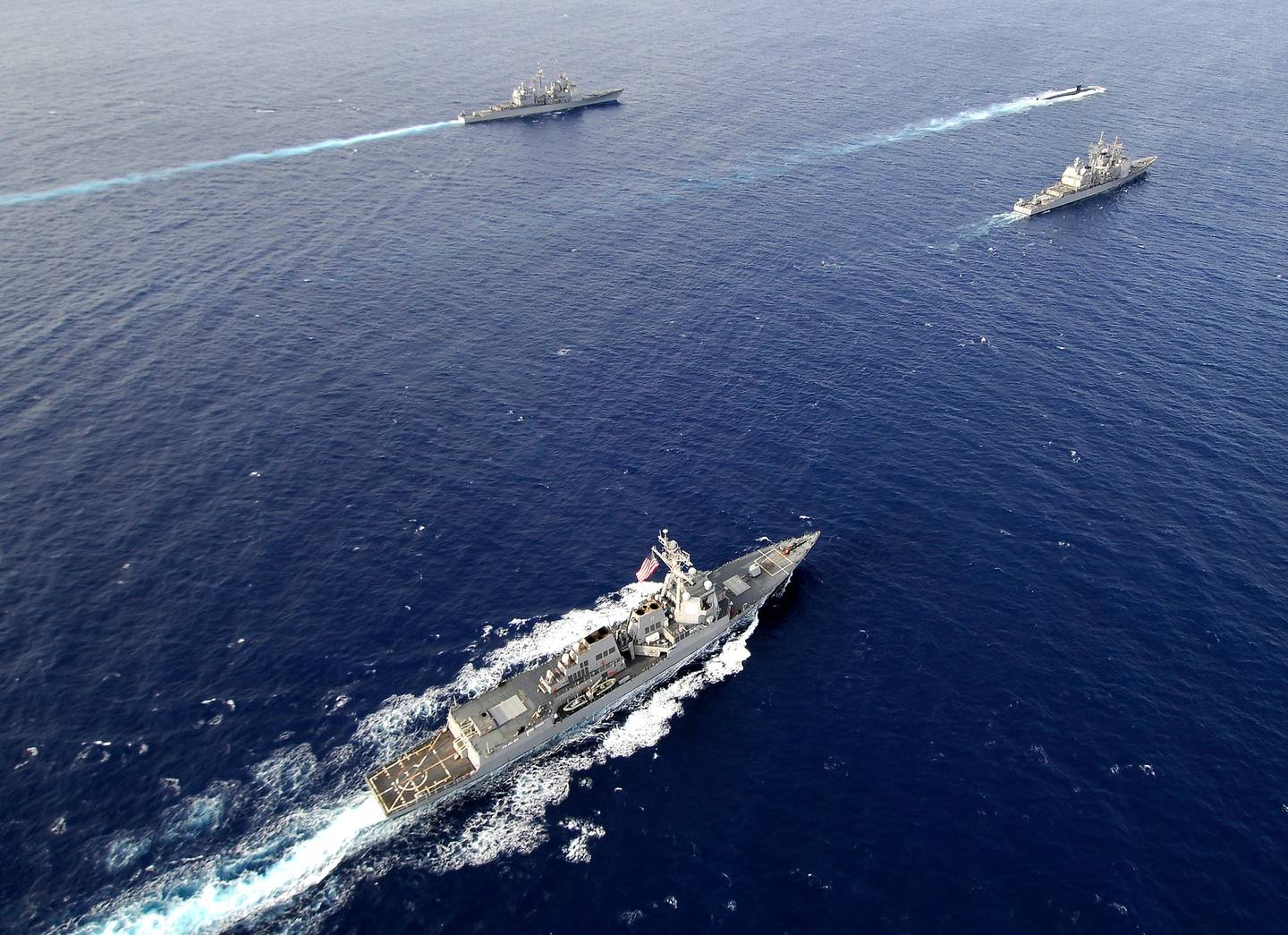 "The Taiwan Strait is international waters, and the waters outside our territorial waters are subject to the 'freedom of the high seas' principle of international law," she told reporters.

"Our government has always respected any activities conducted by foreign vessels in the Taiwan Strait that are allowed by international law."

Washington refuses to accept any change to the status quo.

"The United States will continue to fly, sail and operate wherever international law allows, and that includes transiting through the Taiwan Strait," Pentagon spokesman Lieutenant Colonel Martin Meiners told US media.

"Taiwan is an inalienable part of China's territory," Wang reiterated this week. "Taiwan has sovereignty, sovereign rights and jurisdiction over the Taiwan Strait."

Taipei's foreign ministry spokesperson retorted that the claims were a "distortion of international law" and "revealed China's ambitions to annex Taiwan".

Which they assumed PLAN CV group's long range land-attack power must come from the onboard J-15s. In reality, Type 055 destroyers with their massive VLS arsenal can easily carry dozens/hundreds of CJ-10 cruise missiles to attack Taiwan from the far east. Range 1,000nm+. pic.twitter.com/v8OiIjvEmz

"Is it appropriate to come out and say something like this now?" Tamkang University international affairs analyst Huang Chieh-Chung told Radio Free Asia. "The intentions behind [Wang's comments] may need further analysis."

"One thing China has been doing is presenting its behaviour towards Taiwan from a legal point of view," he says.

Chairman Xi this week signed a law creating a similar "special military operations" concept as to that used by President Putin to avoid calling his invasion of Ukraine a war.

"China has been making comments, particularly using the perspective of international law, to strengthen its legal case for forcing 'unification' on Taiwan," Ye adds. "But the legitimacy isn't accepted by most countries."

But, like Russia, it offers an excuse for hesitant or allied nations to sit on the fence.

The order, titled "Military Forces Nonwar Military Activities (NWMA) Outline- Trial", defines acts to "defend national sovereignty" over "mountains and seas" as qualifying for the use of "innovative military power".

"The Outline adheres to the guidance of Xi Jinping Thought on Socialism with Chinese Characteristics for a New Era … and gives non-war military operations a legal basis," declares the Communist Party-controlled news agency Xinhua.

"[It] thoroughly implements Xi Jinping's thought on strengthening the military, adheres to the overall national security concept, focuses on effectively preventing and defusing risks and challenges. It will maintain National sovereignty, security, and development interests. It will maintain world peace and regional stability, innovating the use of military forces. It will regulate the organisation and implementation of military non-war military operations of great significance to effectively fulfilling the military's missions and tasks in the new era."

The US most recently sent a warship - the guided-missile cruiser USS Port Royal - through the strait last month.

"The US Navy's freedom of navigation operations in and around the Taiwan Strait will likely increase in frequency and publicity to signal that the US disagrees with Beijing's position."