The writer and producer of the hit HBO series "Chernobyl" has called on visitors to the site of the nuclear disaster to show respect, after a series of inappropriate photos were posted online.

"It's wonderful that #ChernobylHBO has inspired a wave of tourism to the Zone of Exclusion. But yes, I've seen the photos going around," tweeted Craig Mazin Tuesday.

"If you visit, please remember that a terrible tragedy occurred there. Comport yourselves with respect for all who suffered and sacrificed."

The five-part series, which ended on June 3 in the United States, tells the story of the missteps and mismanagement that led to the 1986 Chernobyl nuclear accident, the world's worst nuclear disaster.

Its success has led to a surge in the number of visitors to the site in Ukraine, some of whom have posted images of themselves posing with the wrecked buildings and vehicles left behind by those who fled for their lives. 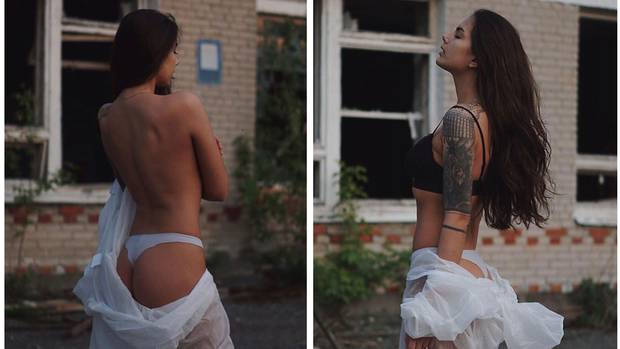 One of the photos generating ire across the internet. (Photo / Instagram, @nz.nik)

One photo shows a woman in a hazmat suit unzipped to expose her underwear, and the images have sparked criticism from Mazin and others online.

While travelers are permitted to visit Chernobyl with a guide, there is no official Ukrainian law in place authorizing tourism in the exclusion zone.

As a result, guests are referred to as "visitors" rather than tourists, according to Victor Korol, director of local tour operator SoloEast.

On April 26, 1986, a reactor at the Chernobyl Nuclear Power Plant exploded, forcing a region-wide evacuation and sending radioactive fallout billowing across Europe.

While the explosion directly caused around 31 deaths, millions of people were exposed to dangerous radiation levels.

The final death toll as a result of long-term radiation exposure is much disputed.

Although the UN predicted up to 9,000 related cancer deaths back in 2005, Greenpeace later estimated up to 200,000 fatalities, taking further health problems connected to the disaster into account.

Authorities imposed a 1,000-square-mile exclusion zone around the reactor, including the city of Pripyat, once home to 50,000 people.

The radiation has not put off social media influencers. Photo / Instagram.com

Much of the area has been open to tourists since 2011, but the HBO series appears to have encouraged a new breed of visitor. HBO is owned by AT&T subsidiary WarnerMedia, which also owns CNN.

The controversy is reminiscent of previous incidents at other important sites.

In 2015, Malaysia fined four foreign hikers after they took naked photos at the top of Mount Kinabalu, which is considered sacred.

And in March, officials from the Auschwitz Museum tweeted a reminder to visitors not to pose for photos at the former Nazi concentration camp where more than 1 million people were murdered.