A 3-week-old wildfire engulfed a tiny Northern California mountain town, leveling most of its historic downtown and leaving blocks of homes in ashes as crews braced for another explosive run of flames Thursday amid dangerous weather.

The Dixie Fire, swollen by bone-dry vegetation and 64kmh gusts, raged through the northern Sierra Nevada community of Greenville on Wednesday. A gas station, church, hotel, museum and bar were among the fixtures gutted in the town dating back to California's gold rush era where some wooden buildings were more than 100 years old.
The fire "burnt down our entire downtown. Our historical buildings, families homes, small businesses, and our children's schools are completely lost," Plumas County Supervisor Kevin Goss wrote on Facebook.

"We lost Greenville tonight," US Rep. Doug LaMalfa, who represents the area, said in an emotional Facebook video. "There's just no words."

As the fire's north and eastern sides exploded Wednesday, the Plumas County Sheriff's Office issued an urgent warning online to the town's approximately 800 residents: "You are in imminent danger and you MUST leave now!"

A similar warning was issued Thursday as flames pushed toward the southeast in the direction of another tiny mountain community, Taylorsville, about 10 miles (16 kilometers) southeast of Greenville.

To the northwest, crews were protecting homes in the town of Chester. Residents there were among thousands under evacuation orders or warnings in several counties.
No injuries or deaths were immediately reported. Flames from the Dixie Fire consume a home and pickup truck on Highway 89 south of Greenville in California yesterday. (Photo / AP)

Margaret Elysia Garcia, an artist and writer who has been in Southern California waiting out the fire, watched video of her Greenville office in flames. It's where she kept every journal she's written in since second grade and a hand edit of a novel on top of her grandfather's roll-top desk.

"We're in shock. It's not that we didn't think this could happen to us," she said. "At the same time, it took our whole town."

Firefighters had to deal with people reluctant to leave on Wednesday. Their refusals meant that firefighters spent precious time loading people into cars to ferry them out, said Jake Cagle, an incident management operations section chief. 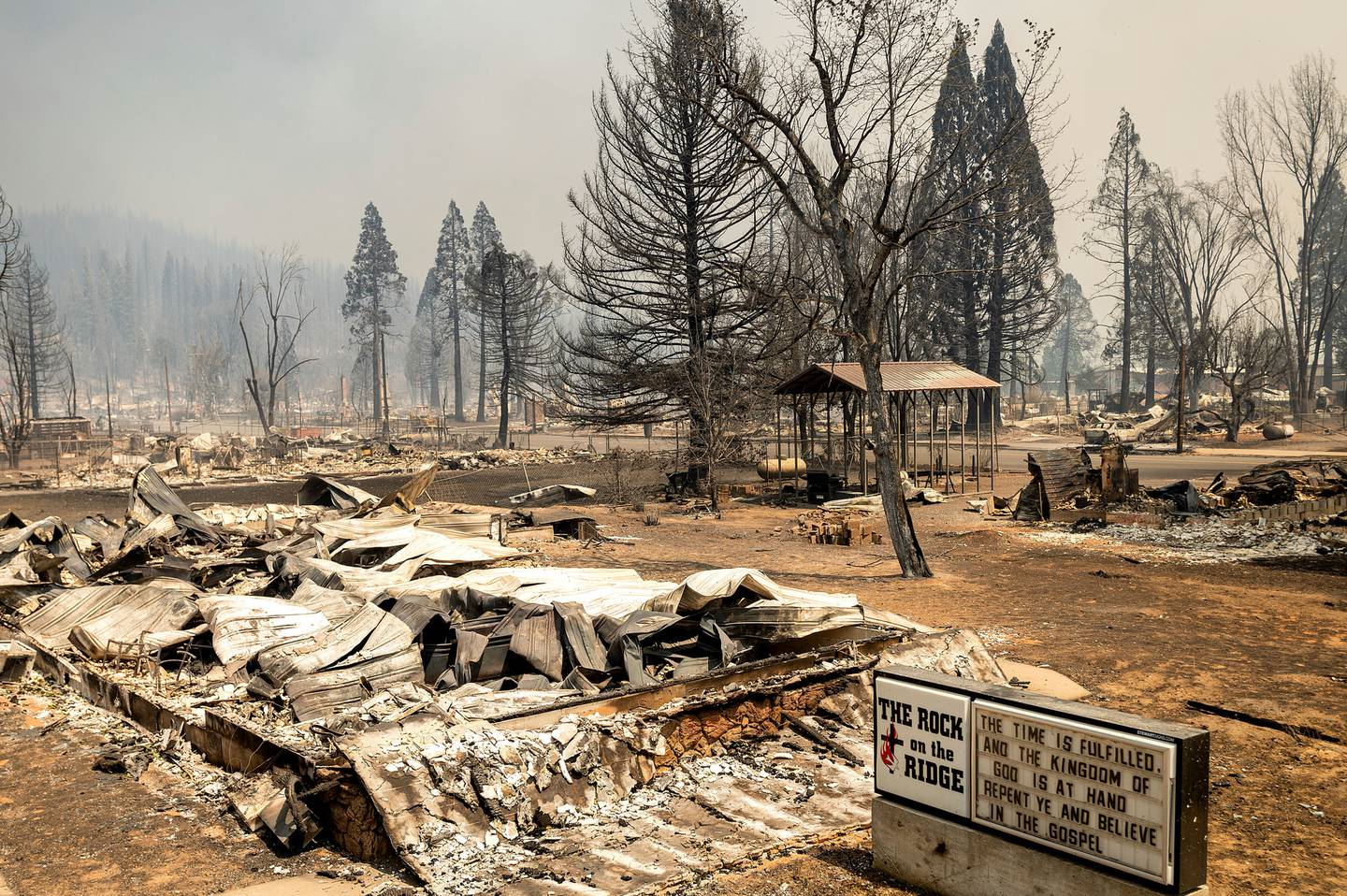 A church marquee stands among buildings destroyed by the Dixie Fire in Greenville. (Photo / AP)

"We have firefighters that are getting guns pulled out on them, because people don't want to evacuate," he said.

The blaze that broke out July 14 is the largest burning in California and had blackened over 1305 square kilometres, an area larger than Los Angeles. The cause was under investigation. But Pacific Gas & Electric has said it may have been sparked when a tree fell on one of its power lines.

The fire was near the town of Paradise, which was largely destroyed in a 2018 wildfire that became the nation's deadliest in at least a century and was blamed on PG&E equipment.
Ken Donnell left Greenville on Wednesday, thinking he'd be right back after a quick errand a few towns over, but couldn't return as the flames swept through. All he has now are the clothes on his back and his old pickup truck, he said. He's pretty sure his office and house, with a bag he had prepared for evacuation, is gone. 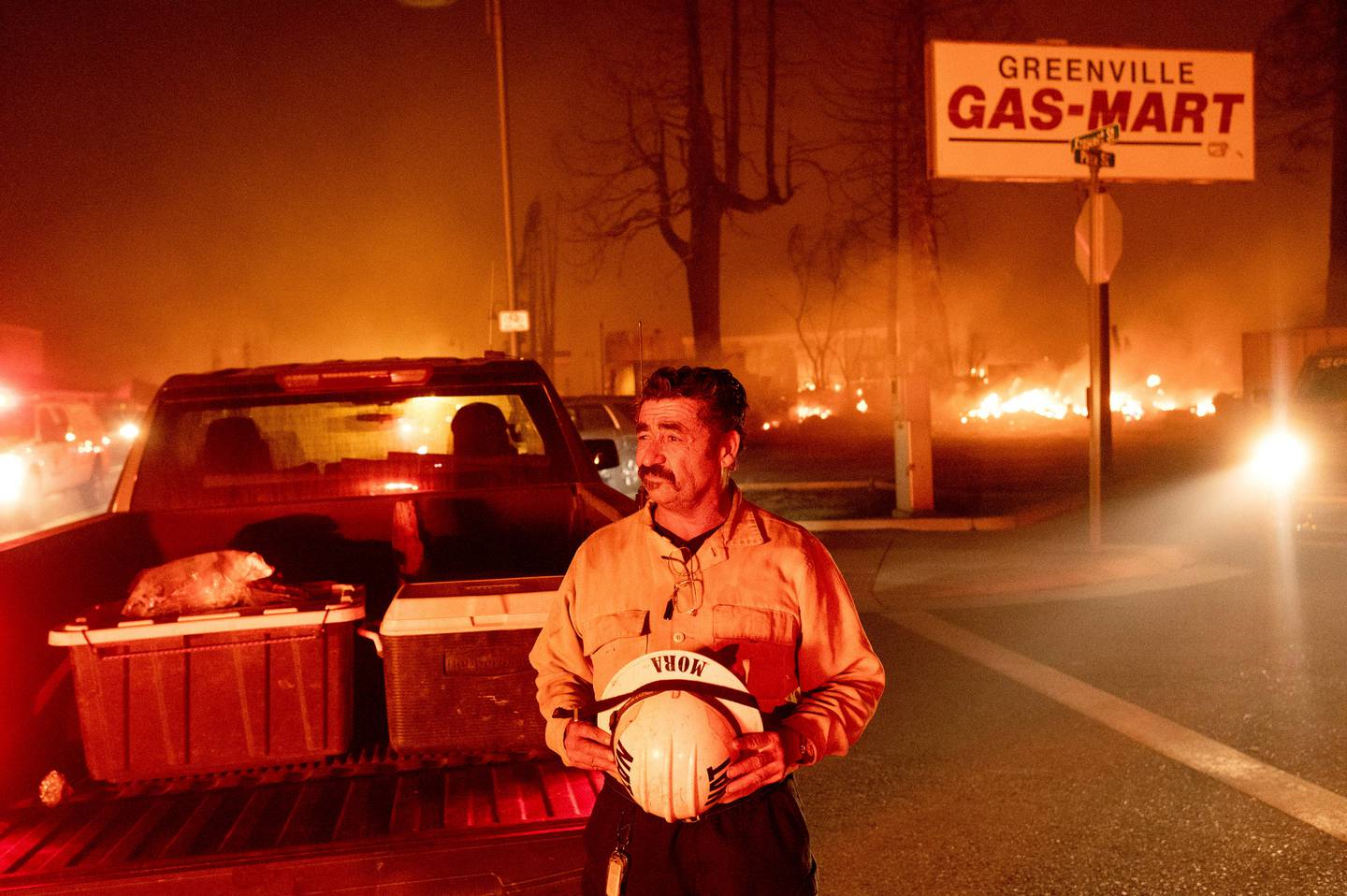 Donnell remembered helping victims of 2018's devastating Camp Fire, in which about 100 friends lost their homes.

"Now I have a thousand friends lose their home in a day," he said.

By Thursday, the Dixie Fire had become the sixth largest in state history, the California Department of Forestry and Fire Protection said. Four of the state's other five largest fires happened in 2020. A bench stands outside a scorched building as the Dixie Fire tears through the Greenville community of Plumas County, California on August 4. The fire leveled multiple historic buildings. (Photo / AP)

Dozens of homes had already burned before the flames made a new run Wednesday. The U.S. Forest Service said initial reports show that firefighters saved about a quarter of the structures in Greenville.

"We did everything we could," fire spokesman Mitch Matlow said. "Sometimes it's just not enough."

About 160 kilometres south, officials said between 35 and 40 homes and other buildings burned in the fast-moving River Fire that broke out Wednesday near Colfax, a town of about 2000. Within hours, it ripped through nearly 10 square kilometres of dry brush and trees. There was no containment and about 6000 people were ordered to evacuate in Placer and Nevada counties, Cal Fire said. 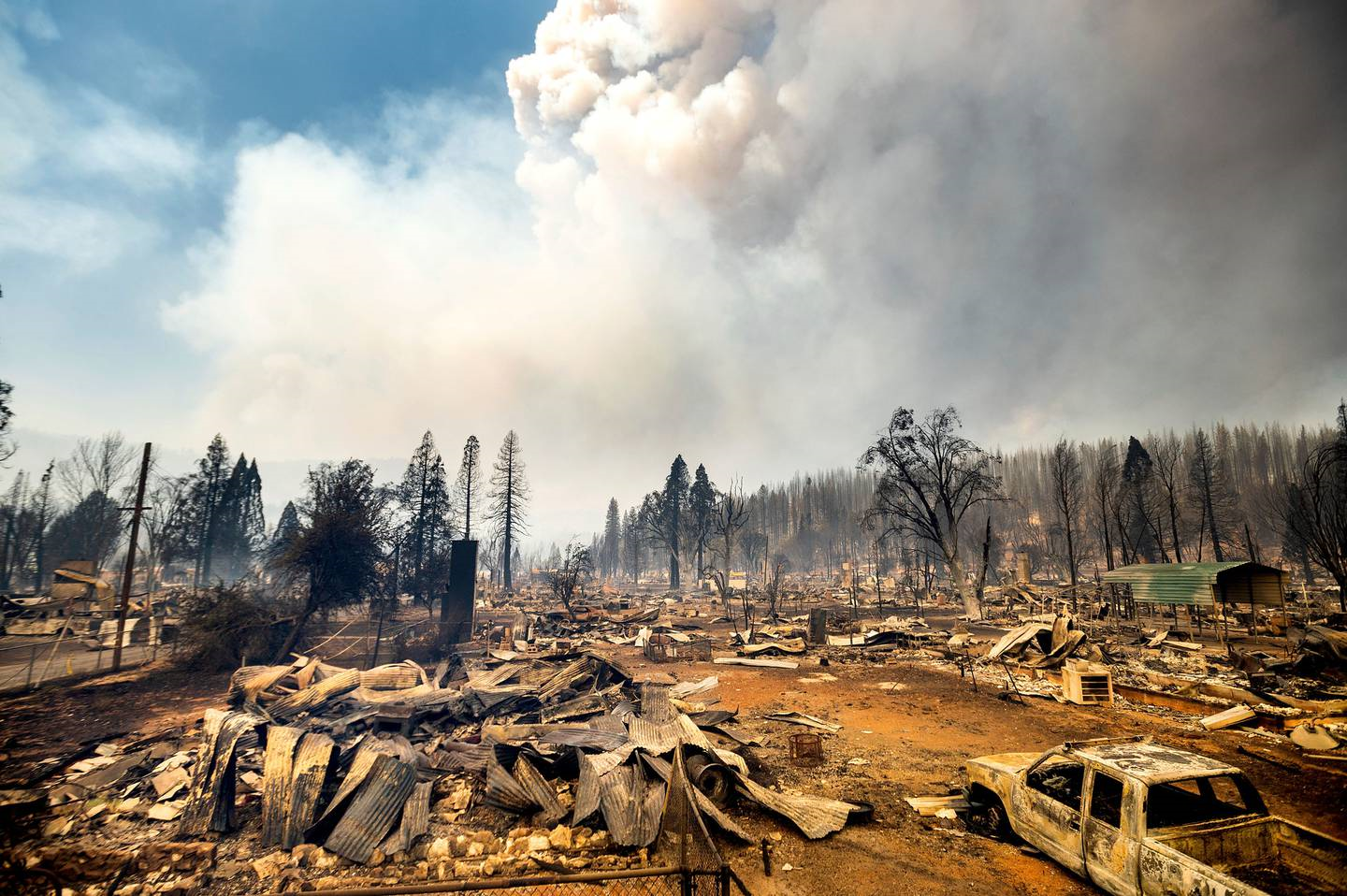 In Colfax, Jamie Brown ate breakfast at a downtown restaurant Thursday while waiting to learn if his house was still standing.

He evacuated his property near Rollins Lake a day earlier, when "it looked like the whole town was going to burn down." Conditions had calmed a bit and he was hoping for the best.

After firefighters made progress earlier this week, high heat, low humidity and gusty winds erupted Wednesday and were expected to remain a threat.

Winds were expected to change direction multiple times Thursday, putting pressure on firefighters at sections of the fire that haven't seen activity in several days, officials said.
The trees, grass and brush were so dry that "if an ember lands, you're virtually guaranteed to start a new fire," Matlow said. 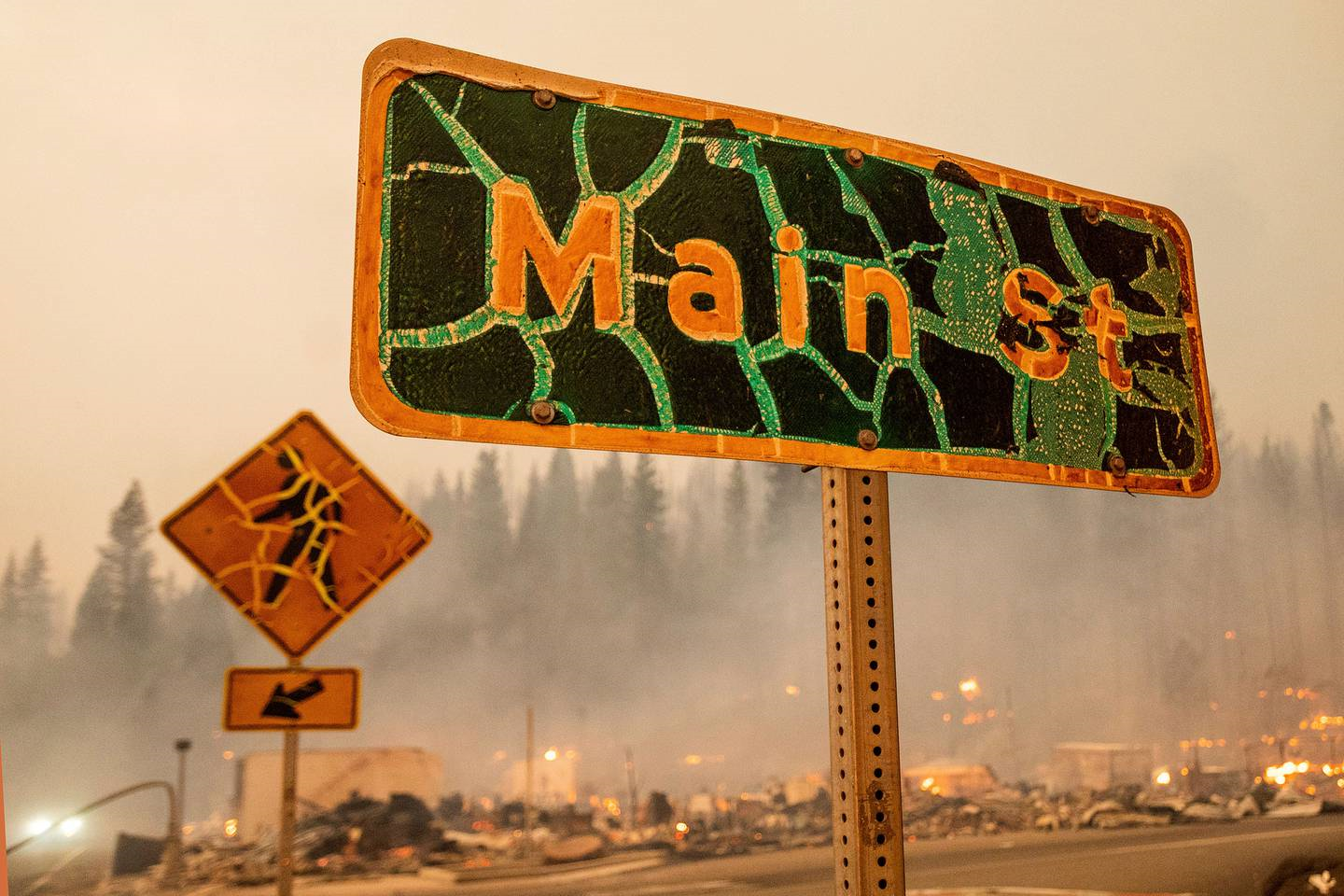 Heat waves and historic drought tied to climate change have made wildfires harder to fight in the American West. Scientists say climate change has made the region much warmer and drier in the past 30 years and will continue to make weather more extreme and wildfires more frequent and destructive.

About 240 kilometres west of the Dixie Fire, the lightning-sparked McFarland Fire threatened remote homes along the Trinity River in the Shasta-Trinity National Forest. There was little containment of the fire after it burned nearly 85 square kilometres of drought-stricken vegetation.

Risky weather also was expected across Southern California, where heat advisories and warnings were issued for inland valleys, mountains and deserts for much of the week.
More than 20,000 firefighters and support personnel were battling 97 wildfires covering 7560 square kilometres) in 13 US states, the National Interagency Fire Center said.