Relatives of the 10 black people massacred in a Buffalo supermarket pleaded with the nation on Thursday (local time) to confront and stop racist violence, their agony pouring out in the tears of a 12-year-old child, hours after the white man accused in the killings silently faced a murder indictment in court.

Jaques "Jake" Patterson, who lost his father, covered his face with his hands as his mother spoke at a news conference. Once she finished, Jake collapsed into the arms of Reverent Al Sharpton, the veteran civil rights activist, and cried silently, using his T-shirt to wipe his tears.

"His heart is broken," said his mother, Tirzah Patterson, adding that her son was having trouble sleeping and eating.

"As a mother, what am I supposed to do to help him get through this?" 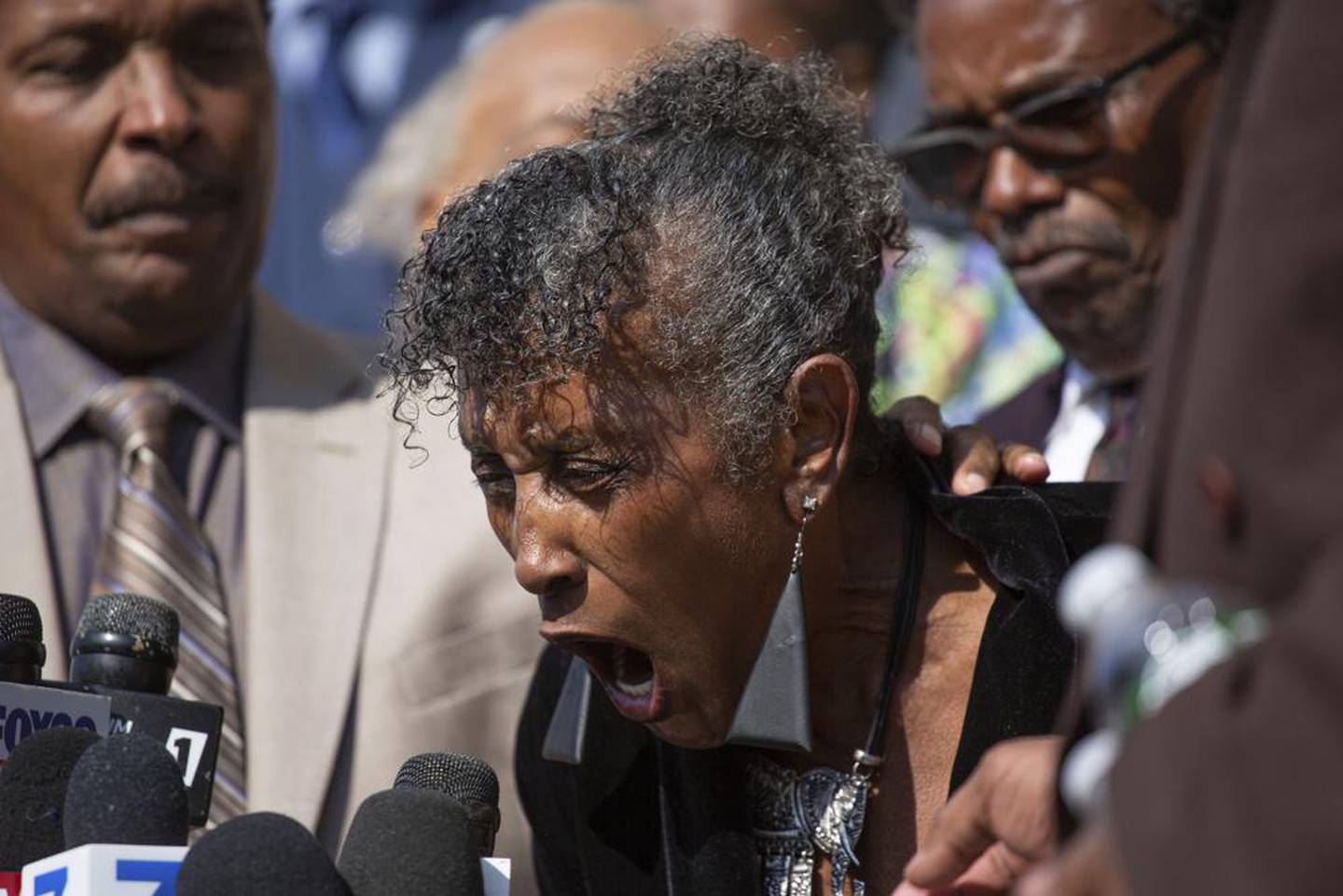 Robin Harris, the daughter of Ruth Whitfield, cries out during a press conference. Photo / AP 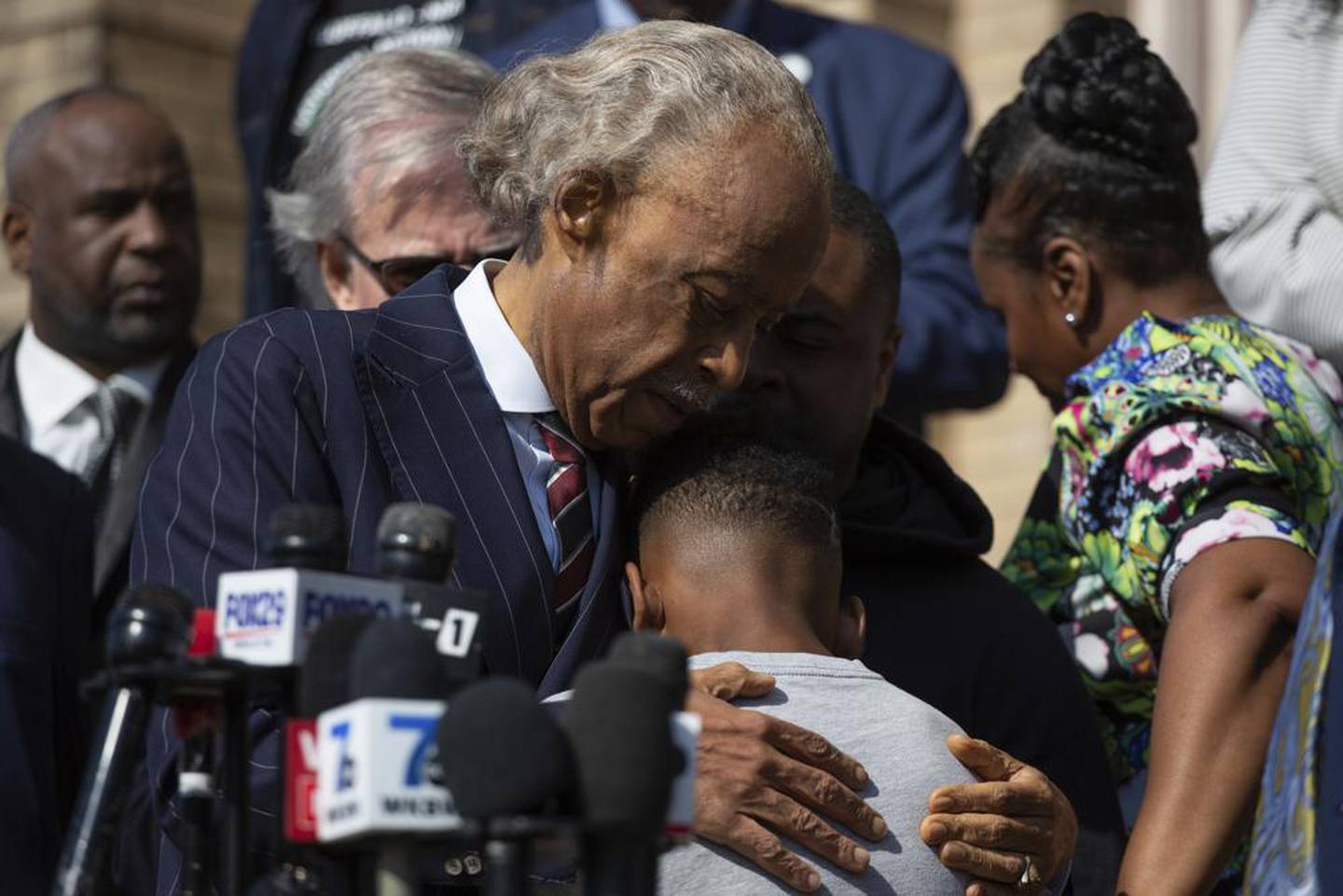 Her ex-husband, Heyward Patterson, a 67-year-old church deacon, was gunned down Saturday at Tops Friendly Market.

So was Robin Harris' 86-year-old mother and best friend, Ruth Whitfield, on a day when they were supposed to go see the touring Broadway show "Ain't Too Proud".

"That racist young man took my mother away," Harris said, trembling and stomping her feet as she spoke.

"How dare you!" Harris shouted viscerally. 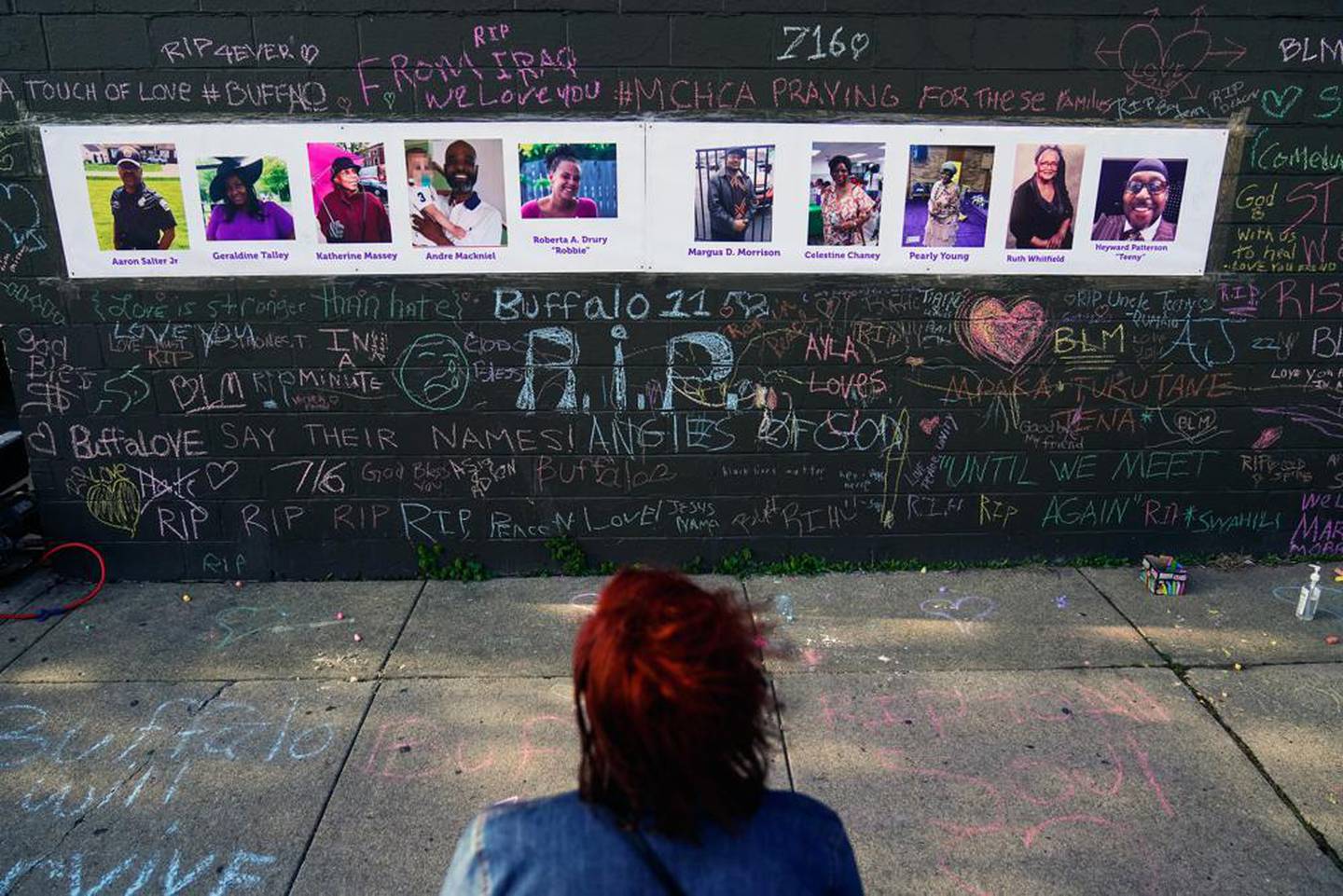 A person visits a makeshift memorial near the scene of Saturday's shooting at a supermarket, in Buffalo. Photo / AP

Earlier in the day in another part of town, accused gunman Payton Gendron, 18, appeared briefly in court to hear that he was indicted in the killings.

"Payton, you're a coward!" someone shouted in the courtroom gallery as he was led away.

Gendron, whose lawyer entered a not guilty plea for him at an earlier court appearance, didn't speak. His attorneys later declined to comment. He is being held without bail and is due back in court on June 9.

Authorities are investigating the possibility of hate crime and terrorism charges against Gendron, who apparently detailed his plans for the assault and his racist motivation in hundreds of pages of writings he posted online shortly before the shooting. It was livestreamed from a helmet-mounted camera. Payton Gendron is led out of the courtroom after a hearing at Erie County Court. Photo / AP

"We need to hold all that have aided and abetted the hate in this country accountable," Sharpton said at the news conference outside Buffalo's Antioch Baptist Church. The civil rights activist's group, the National Action Network, plans to cover funeral expenses for those killed.

The carnage at the Tops supermarket was unsettling even in a nation that has become almost numb to mass shootings. Thirteen people were shot in total, all but two of them black. Gendron's online writings said he planned the assault after becoming infatuated with the white supremacist ideology he encountered online. 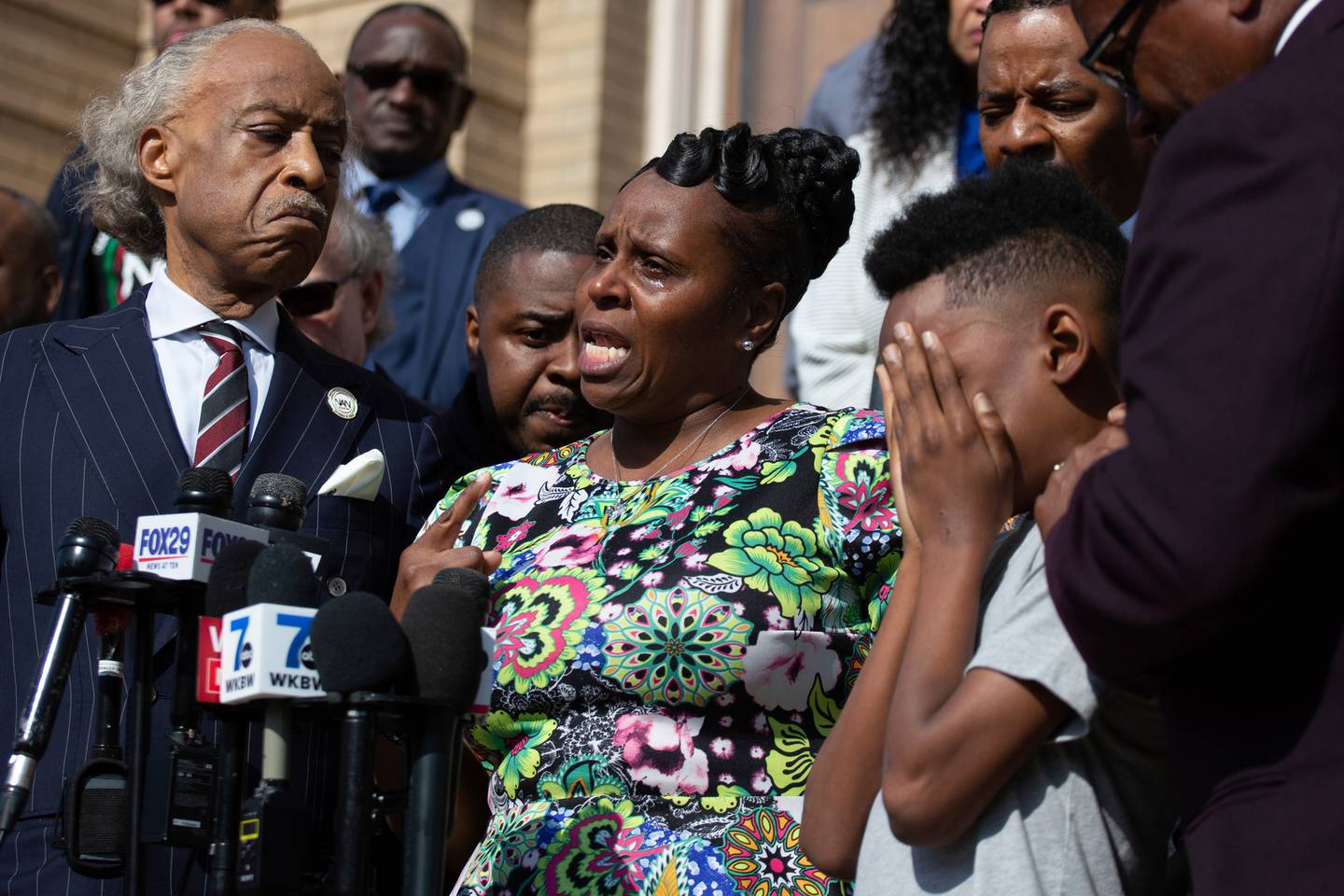 "I constantly think about what could have been done," Mark Talley said at the families' news conference, holding a photo of his slain mother, Geraldine Talley, 62. Her fiancé, who survived the shooting, saw her get shot to death, her son said. 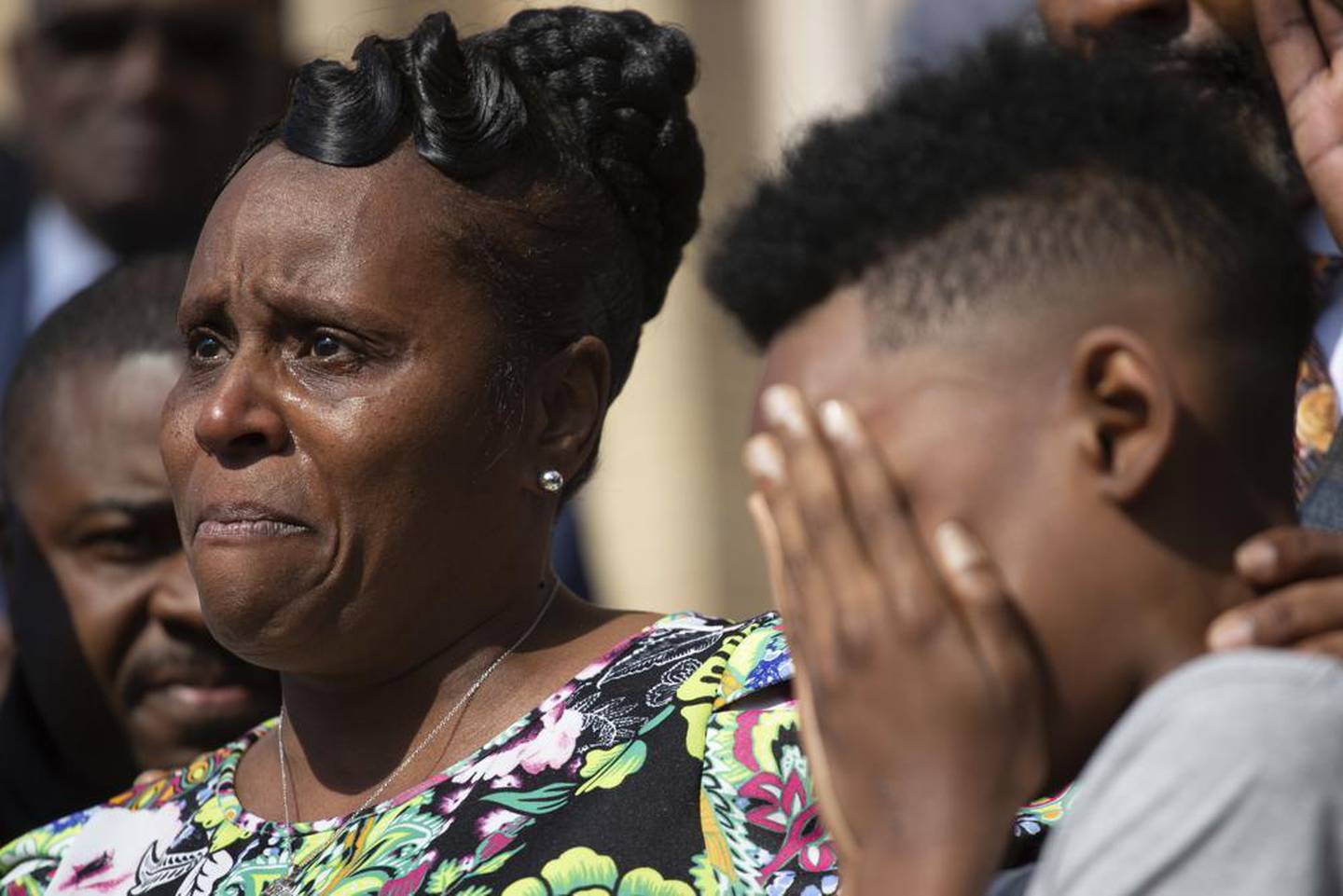 "It's like Groundhog's Day. We've seen this over and over again," he said.

Stephen Belongia, the FBI's lead agent in Buffalo, said at a news briefing that agents were still working to piece together Gendron's motives and how he came to his extremist views. Investigators have been examining the online documents, which included a private diary on the chat platform Discord.

The diary said Gendron planned his attack in secret, with no outside help. A half-hour before opening fire, he invited a small group of people to see his writings.

Fifteen Discord users accepted, according to a person familiar with the investigation who was not authorised to speak about it publicly. 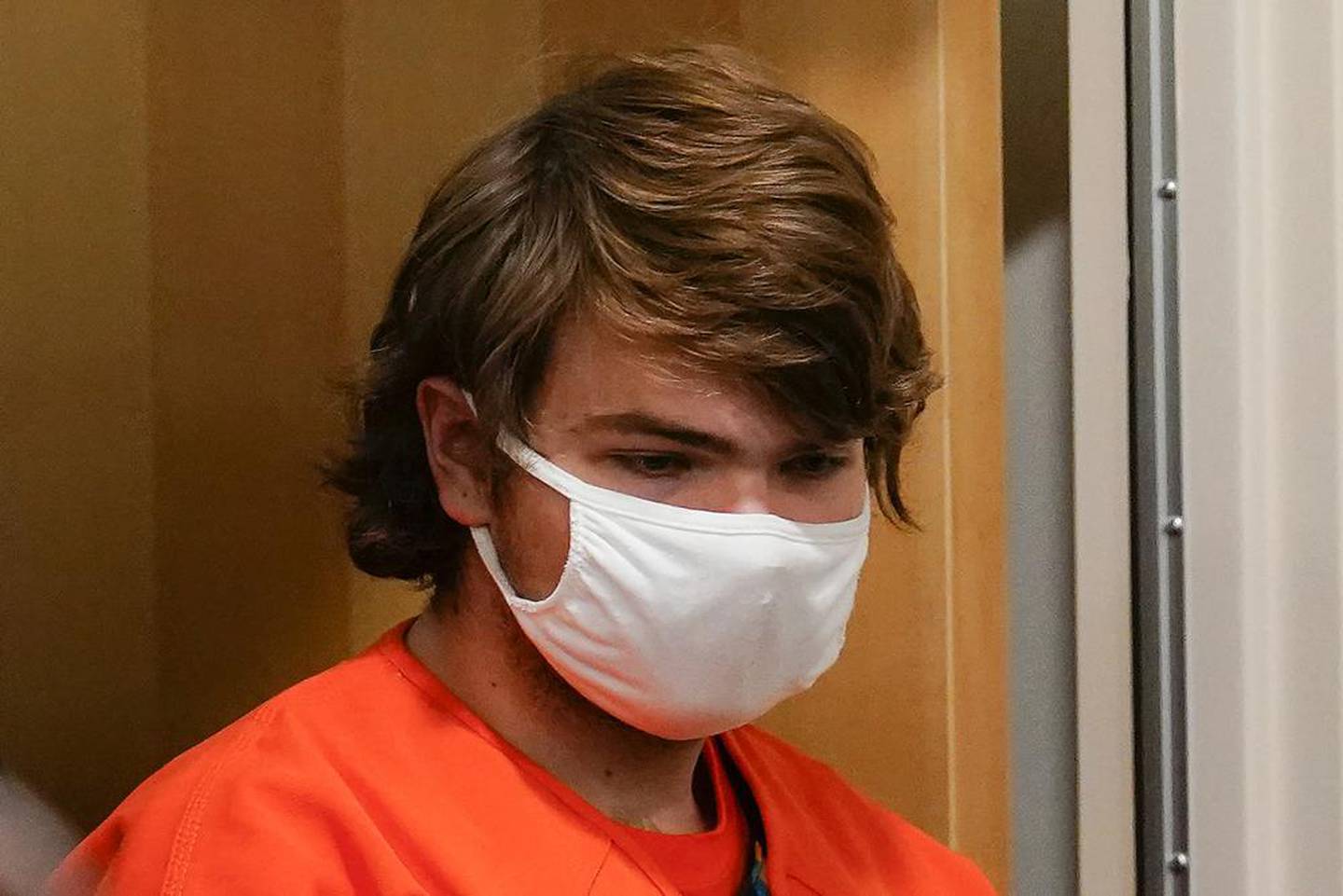 Gendron faces charges in the May 14, fatal shooting at a supermarket. Photo / AP

It wasn't clear how quickly those people saw what he'd written or whether any tried to alert law enforcement.

New York Governor Kathy Hochul has authorised the state's attorney general, Letitia James, to investigate whether social media companies that Gendron used were liable for "providing a platform to plan and promote violence".

"You need to out these people," he said at a briefing. "Expose those that are putting out those types of extreme views, and let us root them out."

At the families' news conference, Tirzah Patterson had another request.

"I need the village to help me raise and be here for my son," she said, asking people to pray "that God gives us strength to go through this".

Civil rights attorney Ben Crump chanted, "We are the village", encouraging the other victims' family members to join in.