From an old pastor in Papua New Guinea whose parents put human flesh in his school lunchbox to a former Khmer Rouge executioner in Cambodia determined to track down his victims' families to apologise, my work as a journalist brought me face-to-face with some extremely morally ambiguous people.

But none holds a candle to Heather Mack, the 25-year-old American who made global headlines in 2014 when she helped her ex-boyfriend Tommy Schaefer bludgeon Mack's mother Sheila von Wiese Mack to death with a heavy fruit bowl before stuffing the corpse in a suitcase while holidaying in Bali.

When I met Mack in Bali's notorious Kerobokan Prison in 2019, she was halfway through a 10-year sentence for accessory to murder and completely unrepentant for the life she took to get her hands on an early inheritance worth $2.2 million.

"Yes, I feel remorse. She didn't deserve to die," Mack told me with the kind of flippancy one might expect from a teenager caught skipping school.

Even more disturbing was the thinly veiled threat she made on my life.

"Do you trust me?" Mack asked, smiling maniacally. "Well, you should. You should trust me not to come after you with a big pineapple knife or fruit bowl when I get out on parole." 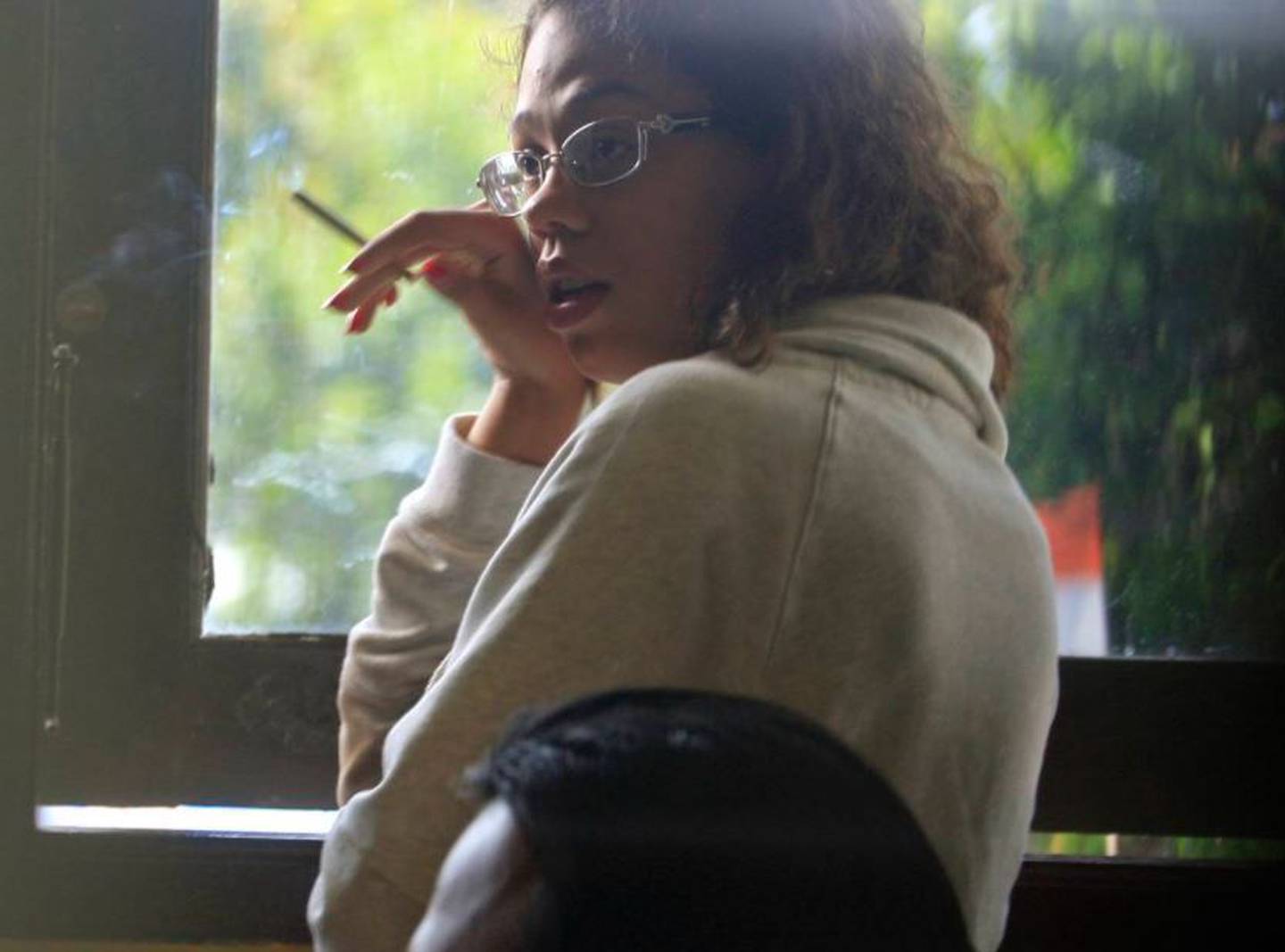 Heather Mack stands at the police district headquarters after she was brought in for questioning in relation to the death of her mother in Bali, Indonesia. Photo / AP

For the past two years, Mack's release has been an abstract concept. But her lawyer Yulius Benyamin Seran told Agence France-Presse Mack would qualify for parole in a little more than one month: "Her sentence will be completed in October and then she'll be completely free," Seran said.

Schaefer, who is now 30 and serving an 18-year sentence for his part in the murder of Sheila von Wiese Mack, did not apply for a sentence reduction as he does not believe he deserves leniency – despite claiming he was the patsy in Mack's murderous plan.

Schaefer's allegations have been corroborated by Mack herself and by text messages they exchanged before the murder in which his ex-girlfriend wrote: "Okay just knock her out. It'll be so much easier" and "Literally can't wait". 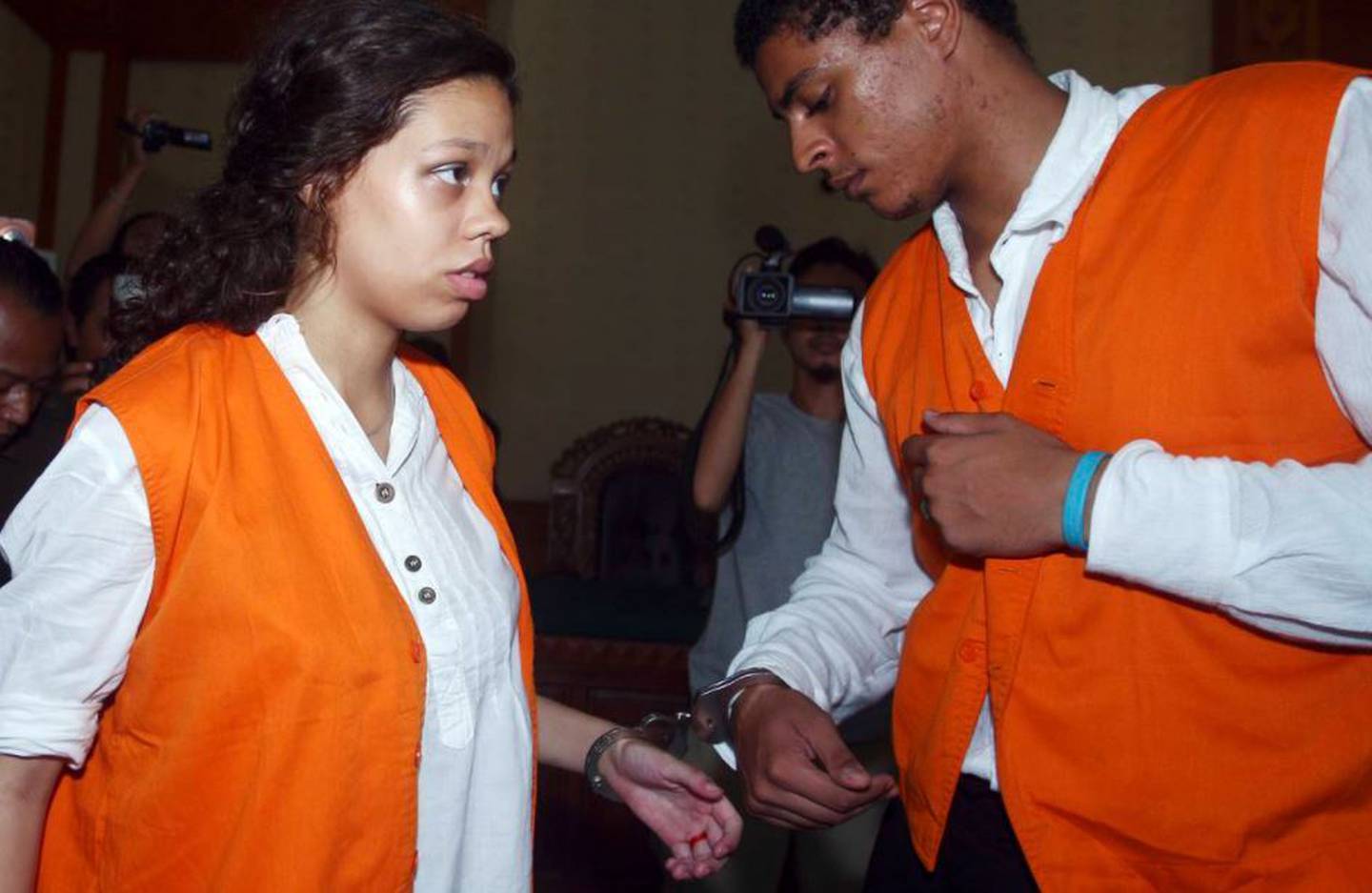 Heather Mack and her boyfriend, Tommy Schaefer, during their trial in Bali. Photo / AP

"I am guilty of murder and that is why I am in here," Shaefer told me during a series of lengthy interviews at Kerobokan Prison. "I did it along with Heather but my reasons for killing Sheila were different to hers. She had an objective and I was emotionally tagged along.

"I don't want to sound like a crybaby or a b**ch or that I am not a man, but I was emotionally tricked. God only knows the sorts of mind games and tricks I went through at the time, which is why I helped kill her mother."

Shaefer may have committed the ultimate crime but he touched my heart in ways few people ever have. A born-again-Christian who has baptised more than 50 men in prison, every inch of Shaefer's soul screamed with remorse.

"I have become a better person in here because of how forgiving the Indonesians are," he said, crying inconsolably. "They don't judge you for the mistakes you've made because they understand every person in here is going through a process of cleansing. It's your process so they give you freedom in prison.

When I asked Shaefer why he had agreed to speak to me after rejecting every other journalist who'd attempted to engage him in the past, he answered: "I can see the good in you. I see the love in you. I think God brought you here today so you could share my story with the world. The time has come to break my silence."

When I asked Mack the same question the following day, she said: "I always wanted to tell my story because it relates to a lot of people in dealing with racism. My mother was a racist. That is why this happened."

Mack claims her mother hated Shaefer because of his skin colour and used the "n" word repeatedly in his presence even though Mack's father, the late great jazz composer James L Mack, was an African-American. Yet in a 2017 video confession, Mack published on YouTube she said she killed her mother because she murdered her father, who died of a pulmonary embolism while holidaying in Greece in 2006.

Unlike Schaefer, who has suffered terribly in prison, Mack actually enjoyed her time at Kerobokan. She studied and perfected not only the language but the mannerisms of her Indonesian keepers, using her formidable emotional intelligence to convince them hook, line and sinker that she is reformed. She is the most popular and well-liked convict in the prison's female section. 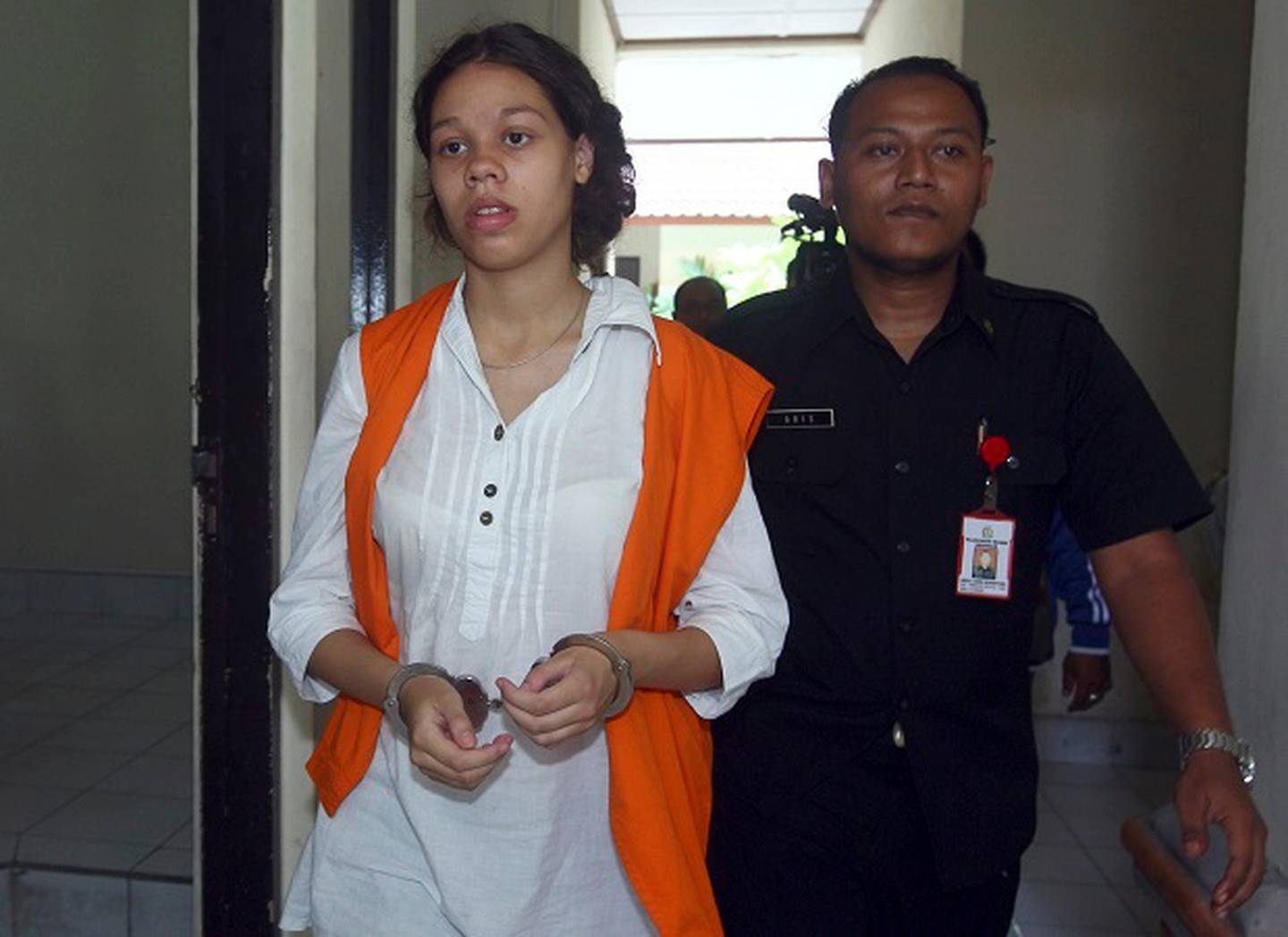 Handcuffed Heather Mack of Chicago is escorted by an Indonesian prison guard in 2015. Photo / AP

But Mack is going to receive a very different reception when she is deported to the US after her sentence is complete. She will have trouble finding a sympathetic ear in her native Chicago, where she is considered a pariah who got away very lightly with murder and will be hounded relentlessly by the press.

"Wouldn't a truly remorseful teenager have called me as her aunt and her second mother to grieve? Wouldn't she call her cousins or friends and cry?" Debbi Curran, von Wiese Mack's sister, told The Chicago Tribune. "There are no words to describe how horrific this crime was. The punishment should fit the crime."

Added William Wiese, a close friend of the family: "For a brutal murder, I feel that type of light sentence was a travesty of justice."

Mack may also be charged for conspiring to commit foreign murder of a US citizen as per the case of Schaefer's cousin, Robert Ryan Justin Bibbs. Before flying to Bali, Mack offered Bibbs US$50,000 to find a hitman to kill her mother. Bibbs later exchanged text messages with Schaefer in which he advised his cousin on different ways to kill Von Wiese Mack, including drowning or suffocation, and to be wary of security cameras. In 2017, Bibbs was sentenced to nine years in a federal prison.

Mack's fear of being incarcerated in the US appears to be the reason she is petitioning the High Court in Bali to allow her and Shaefer's daughter Stella to remain in Bali for another year after she is deported. Stella, who is 6 years old, was born at Kerobokan Prison and is now the ward of Australian-Balinese woman Oshar Putu Melody Suartama, who declined to comment for this story.

The FBI did not respond to inquiries about any plans they may have to arrest Mack in the US. The Ministry of Law and Human Rights in Indonesia, which oversees the country's courts and prisons, also refused to say if it had been contacted by legal authorities in the US about Mack's pending release.

Elliot Jacobson, the official media liaison for the Wiese family in the US told news.com.au, "we don't want to discuss or speculate on what should happen to Heather Mack as we believe we should let the criminal case, if there is one, play out without our intervention." 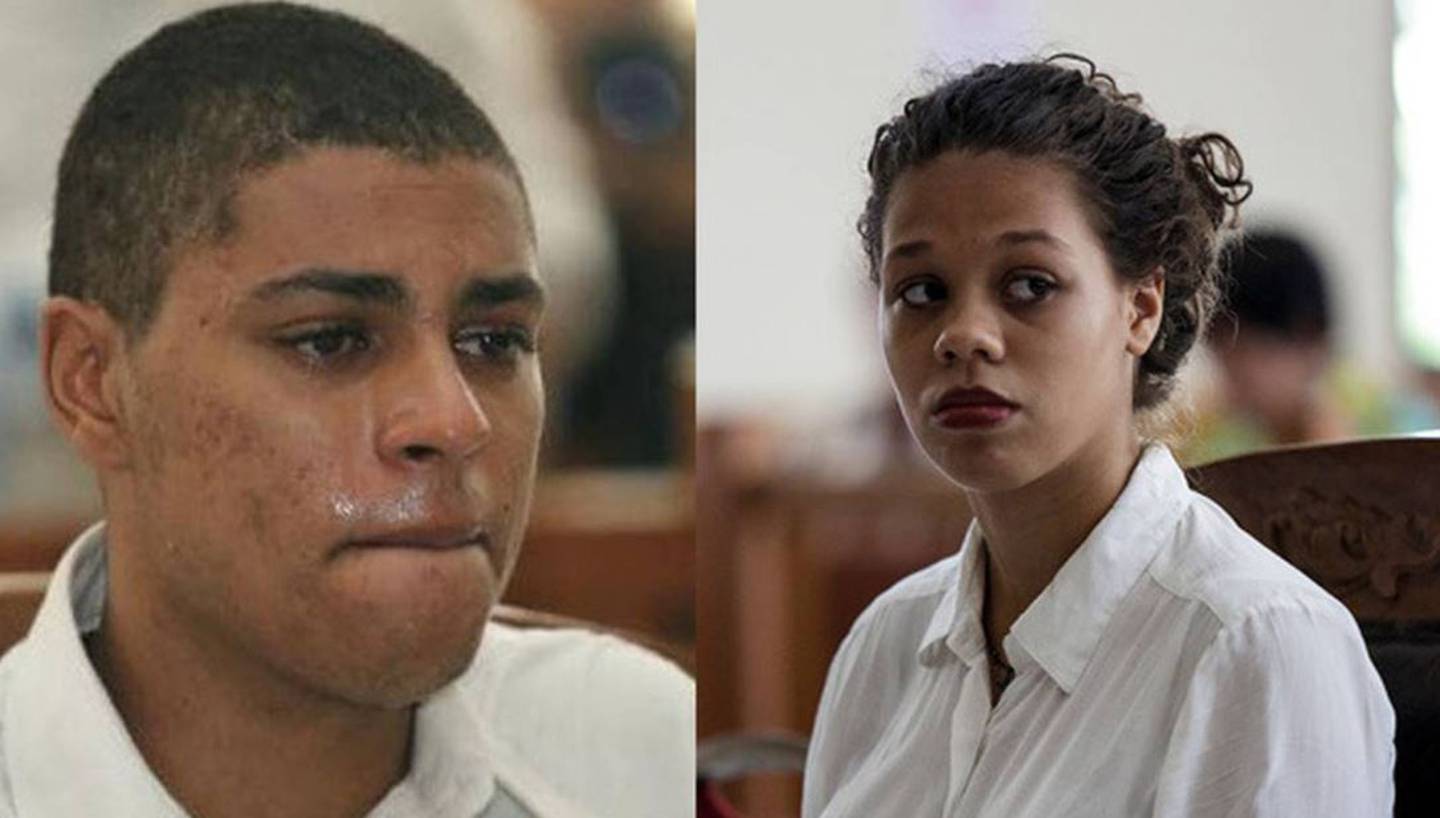 Heather Mack and her boyfriend Tommy Schaefer murdered Mack's mother and hid her body in a suitcase during their holiday in Bali. Photo / Getty Images

As to whether Mack will carry out her threat to kill me when she is paroled, well … she is going to have a hard time reaching me in Sydney.

But having looked into Mack's eyes as she made up lie after lie to justify the murder of her own mother, I believe she is a psychopath who could kill again and not even blink.

"Heather," Schaefer told me before we parted, "Heather is a black hole."