The backpack was tied to a tree that was half-submerged, a firefighter told reporters in Atalaia do Norte, the closest city to the search area, which is near the Javari Valley Indigenous Territory. It is the flood season in the region and part of the forest is flooded.

Officers with the Federal Police brought the items by boat to Atalaia do Norte later in the afternoon. 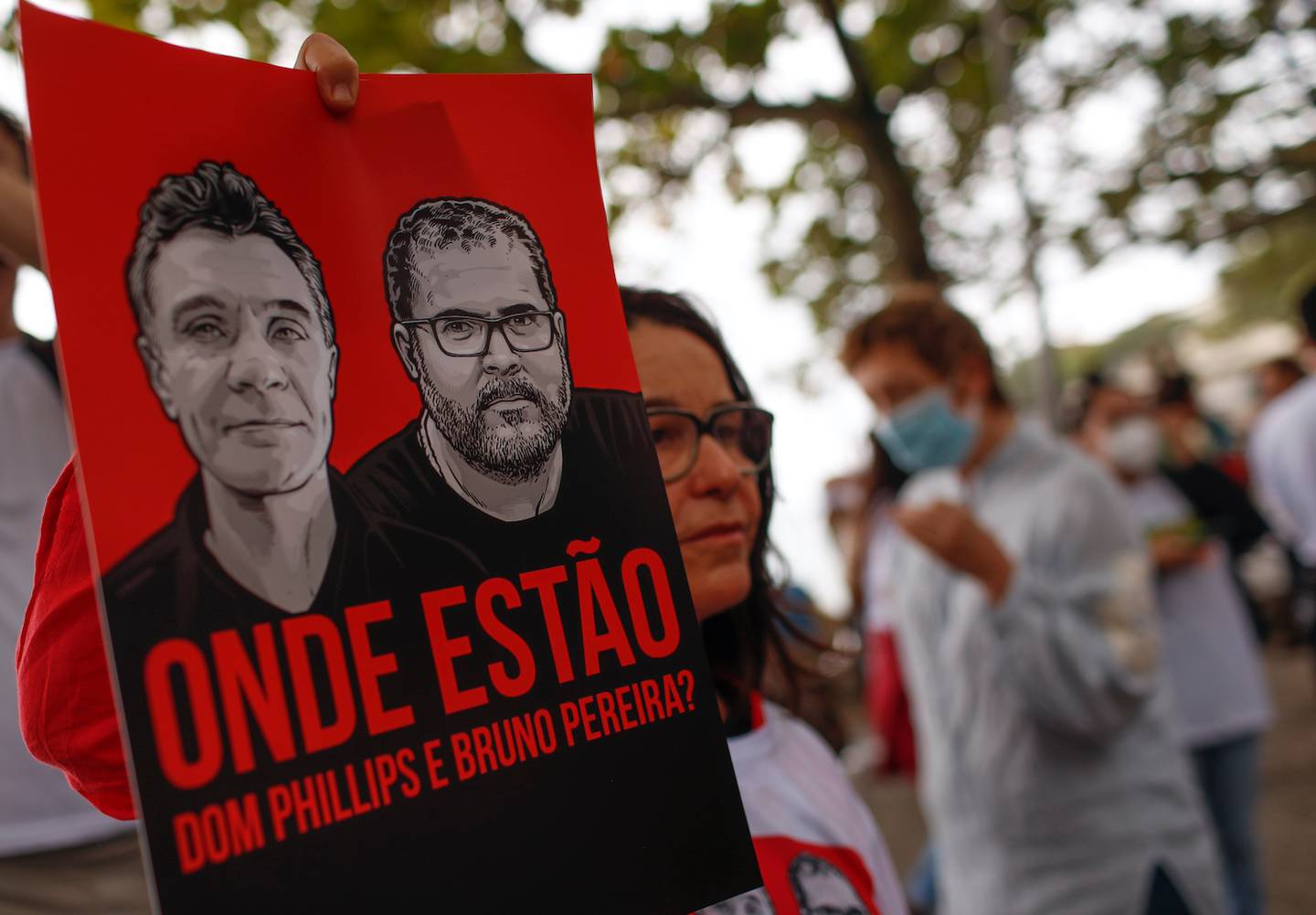 The local Indigenous association, with which Pereira was working at the time of his disappearance, confirmed that firefighters' divers found a backpack but said it could not immediately say to whom it belonged. The area has only poor riverside communities, where equipment like laptops are rare.

Orlando Possuelo, a member of the Indigenous association, known as UNIVAJA, told reporters that Indigenous volunteers also found a tarp that had been in the boat used by the missing men and a T-shirt that belonged to Pereira near the site of the backpack.

"Now, the hope is to try to find at least part of the bodies," he said.

Previously, police found traces of blood in the boat of a fisherman who is under arrest as the only suspect and organic matter of apparent human origin inside the river. Officials said Saturday that both materials were being analysed, and no more details were provided.

Pereira, 41, and Phillips, 57, were last seen June 5 near the entrance of the Indigenous territory, which borders Peru and Colombia. They were returning alone by boat on the Itaquai river to Atalaia do Norte but never arrived.

That area has seen violent conflicts between fishermen, poachers and government agents. Violence has grown as drug trafficking gangs battle for control of waterways to ship cocaine, although the Itaquai is not a known drug trafficking route.

Authorities have said that a main line of the police investigation into the disappearance has pointed to an international network that pays poor fishermen to fish illegally in the Javari Valley reserve, which is Brazil's second-largest Indigenous territory.

One of the most valuable targets is the world's largest freshwater fish with scales, the arapaima. It weighs up to 200 kilograms and can reach 3 metres. The fish is sold in nearby cities, including Leticia, Colombia, Tabatinga, Brazil, and Iquitos, Peru.

The only known suspect in the disappearances is fisherman Amarildo da Costa de Oliveira, also known as Pelado, who is under arrest. According to accounts by Indigenous people who were with Pereira and Phillips, he brandished a rifle at them the day before the pair disappeared. The suspect denies any wrongdoing and said military police tortured him to try to get a confession, his family told The Associated Press.

Pereira, who previously led the local bureau of the government's Indigenous agency, known as FUNAI, has taken part in several operations against illegal fishing. In such operations, as a rule the fishing gear is seized or destroyed, while the fishermen are fined and briefly detained. Only the Indigenous can legally fish in their territories.

"The crime's motive is some personal feud over fishing inspection," the mayor of Atalaia do Norte, Denis Paiva, speculated to reporters without providing more details.

AP had access to information police shared with Indigenous leadership. But while some police, the mayor and others in the region link the pair's disappearances to the "fish mafia," federal police have not ruled rule out other lines of investigation, such as narco trafficking.

Fisherman Laurimar Alves Lopes, who lives on the banks of Itaquai, told AP that he gave up fishing inside the Indigenous territory after being detained three times. He said he endured beating and starvation in jail.

Lopes, who has five children, said he only fishes near his home to feed his family, not sell.

"I made many mistakes, I stole a lot of fish. When you see your child dying of hunger you go get it where you have to. So I would go there to steal fish to be able to support my family. But then I said: I'm going to put an end to this, I'm going to plant," he said during an interview on his boat.

Lopes said he was taken to local federal police headquarters in Tabatinga three times, charging he was beaten and left without food.

In 2019, Funai official Maxciel Pereira dos Santos was gunned down in Tabatinga in front of his wife and daughter-in-law. Three years later, the crime remains unsolved. His FUNAI colleagues told AP they believe the slaying was linked to his work against fishermen and poachers.

Rubber tappers founded all the riverbank communities in the area. In the 1980s, however, rubber tapping declined and they resorted to logging. That ended, too, when the federal government created the Javari Valley Indigenous Territory in 2001. Fishing has become the main economic activity since then.

An illegal fishing trip to the vast Javari Valley lasts around one month, said Manoel Felipe, a local historian and teacher who also served as a councilman. For each illegal incursion, a fisherman can earn at least US$3000.

"The fishermen's financiers are Colombians," Felipe said. "In Leticia, everybody was angry with Bruno. This is not a little game. It's possible they sent a gunman to kill him."