A senior Australian minister has suggested that China deliberately announced its security pact with the Solomon Islands during an election campaign to undermine her government's chances of reelection.

Home Affairs Minister Karen Andrews' accusation is consistent with her conservative Liberal Party's argument that Beijing wants the Labor Party to win the May 21 election because Labor lawmakers were less likely to stand up to Chinese economic coercion.

Labor has described the government's inability to prevent the deal announced by the Chinese and Solomons governments last week as Australia's biggest foreign policy failure in the Pacific since World War II.

Andrews — who is responsible for the Australian Security Intelligence Organisation, the nation's main domestic spy agency, and has access to classified secrets from other intelligence agencies — said Australians should be "taking notice of and paying some attention to" the timing of the Solomons' announcements.

"We talk about political interference and that has many forms," Andrews added.

Australia angered China in 2018 by passing national security laws that ban covert foreign interference in domestic politics. The Chinese Foreign Ministry said at the time the government was prejudiced against China and had poisoned the atmosphere of China-Australia relations.

Jim Chalmers, a senior Labor lawmaker, dismissed the possibility of China attempting to use its Solomons deal to influence the Australian election.

"Even by the incredibly low standards of this government, I thought what Karen Andrews said was remarkably desperate and remarkably unhinged," Chalmers said. "The Australian people will determine who wins this election."

John Blaxland, Australian National University's Professor of International Security and Intelligence Studies, questioned whether Andrews was drawing on classified intelligence briefings in her comments on the Solomons.

"It certainly is plausible that they timed it this way. They would've been mindful of what's happening in the elections," Blaxland said.

"I'd be very surprised if China wanted to go public on siding with one side or the other because that's basically a poison chalice you're handing to that side of politics," Blaxland added.

Blaxland suspected Beijing and Paris would both welcome a change of government in the hope of resetting their bilateral relationships with Australia. 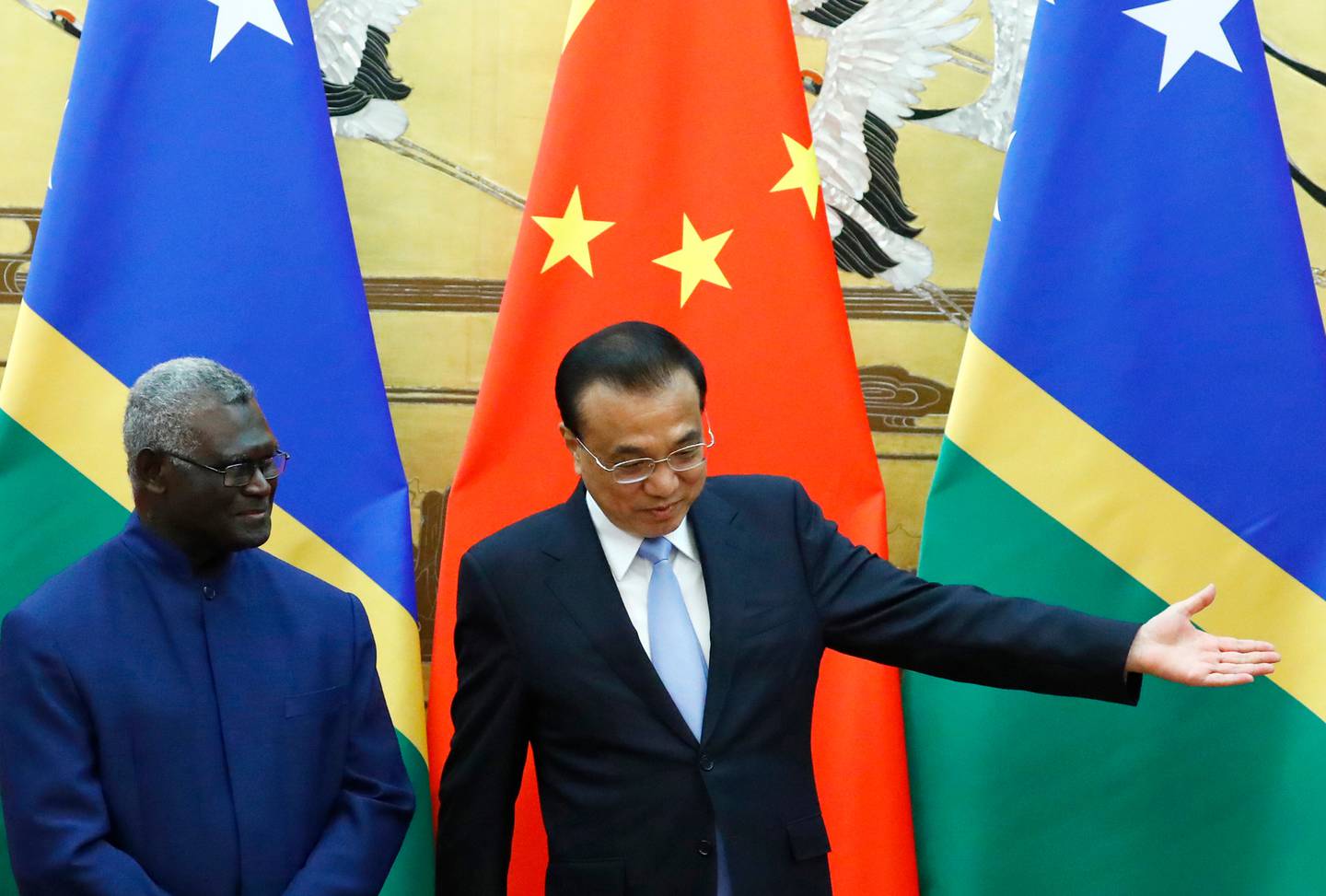 "China stands ready to work with the new Australian government to move forward bilateral ties along the right track," a ministry official said at the time.

But bilateral relations have continued to sour.

France was incensed in September when Australia dumped a US$66 billion contract for French-build conventional submarines. The United States and Britain will instead provide Australia with a nuclear-powered fleet.

The government boasts the new submarine deal is evidence of its superiority over Labor on national security.

The Chinese Foreign Ministry attacked Defence Minister Peter Dutton's warning this week that Australians must prepare for war because of the threat from China and global insecurity spurred by the Russian invasion of Ukraine.

US Assistant Secretary of State for East Asian and Pacific Affairs Daniel Kritenbrink said the United States had a fundamental concern with the lack of transparency in Chinese activities in the Pacific islands.

"Only a handful of people in a very small circle" in the Solomons had seen the detail of the Chinese pact, Kritenbrink said Tuesday.

Labor on Tuesday announced a range of measures that it would implement in government to increase Australia's engagement in the Pacific.

Prime Minister Scott Morrison said that by blaming the government, Labor was siding with China in the dispute over the Solomons pact that has raised fears of a Chinese naval presence less than 2,000kms off the northeast Australian coast.

"They are playing politics with the Pacific and the only ones who are benefitting from Labor's attacks on the government is the Chinese government," Morrison said Tuesday.