Australia's Prime Minister-elect Anthony Albanese is a politician moulded by his humble start to life as the only child of a single mother who raised him on a pension in gritty inner-Sydney suburbia.

He is also a hero of multicultural Australia, describing himself as the only candidate with a "non-Anglo Celtic name" to run for prime minister in the 121 years the office has existed.

He has promised to rehabilitate Australia's international reputation as a climate change laggard with steeper cuts to greenhouse gas emissions.

His financially precarious upbringing in government-owned housing in suburban Camperdown fundamentally formed the politician who has led the centre-left Australian Labor Party into government for the first time since 2007. He is still widely known by his childhood nickname, Albo.

"It says a lot about our great country that a son of a single mom who was a disability pensioner, who grew up in public housing down the road in Camperdown can stand before you tonight as Australia's Prime Minister," Albanese said in his election victory speech on Saturday.

"Every parent wants more for the next generation than they had. My mother dreamt of a better life for me. And I hope that my journey in life inspires Australians to reach for the stars," he added. 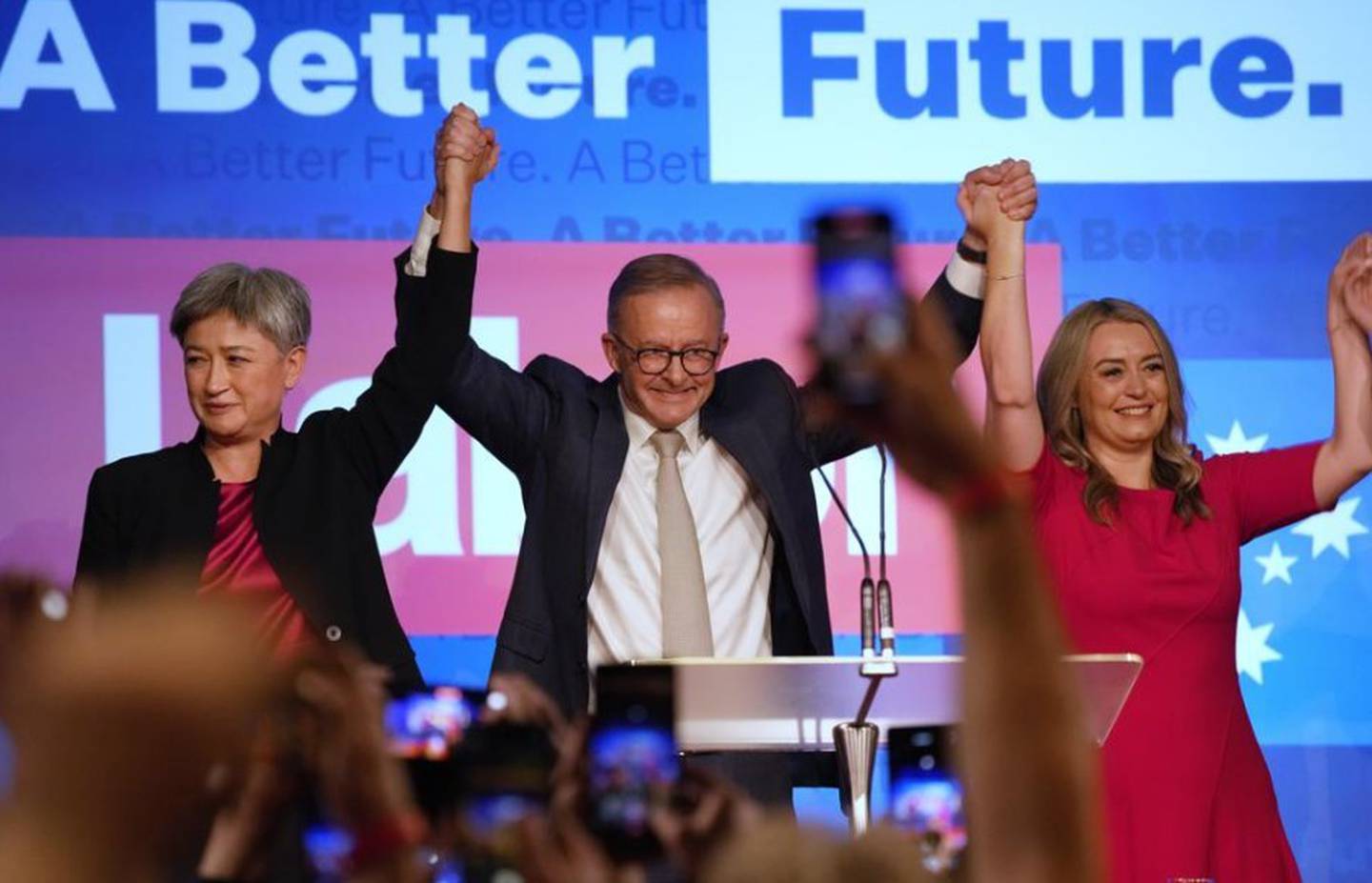 Albanese repeatedly referred during the six-week election campaign to the life lessons he learned from his disadvantaged childhood. Labor's campaign has focused on policies including financial assistance for first home buyers grappling with soaring real estate prices and sluggish wage growth.

Albanese said he will be "completely consistent" with outgoing Prime Minister Scott Morrison's current administration on Chinese strategic competition in the region.

But he said Australia had been placed in the "naughty corner" in United Nations' climate change negotiations by refusing to adopt more ambitious emissions reduction targets at a November conference.

"One of the ways that we increase our standing in the region, and in particular in the Pacific, is by taking climate change seriously," Albanese told the National Press Club.

Biden's administration and Australia "will have a strengthened relationship in our common view about climate change and the opportunity that it represents," Albanese said.

Albanese blamed Morrison for a "whole series of Australia's international relations being damaged."

He said Morrison misled the United States that a secret plan to provide Australia with a fleet of submarines powered with US nuclear technology had the support of Albanese's Labor Party. In fact, Labor wasn't told of the plan until the day before it was announced in September.

Albanese also accused Morrison of leaking to the media personal text messages from Emmanuel Macron to discredit the French president's complaint that Australia had given no warning a French submarine contract would be cancelled.

In November, French Ambassador to Australia Jean-Pierre Thebault described the leak a "new low" and a warning to other world leaders that their private communications with the Australian government could be weaponised and used against them.

Labor also has described a new security pact been China and the Solomon Islands as Australia's worst foreign policy failure in the Pacific since World War II.

As a young child, to spare Albanese the scandal of being "illegitimate" in a working-class Roman Catholic family in socially conservative 1960s Australia, he was told that his Italian father, Carlo Albanese, had died in a car accident shortly after marrying his Irish-Australian mother, Maryanne Ellery, in Europe. 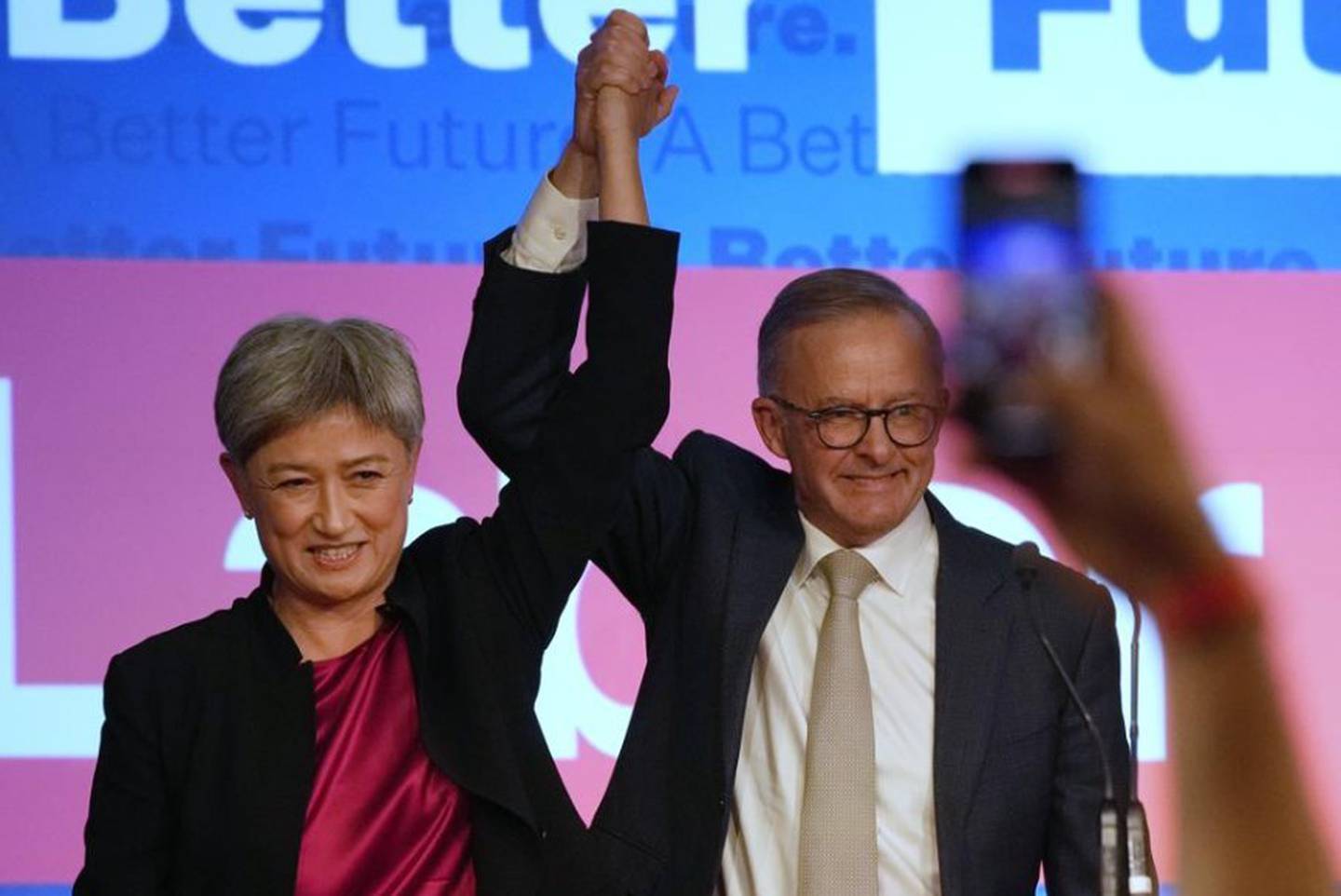 His mother, who became an invalid pensioner because of chronic rheumatoid arthritis, told him the truth when he was 14 years old: his father was not dead and his parents had never married.

Carlo Albanese had been a steward on a cruise ship when the couple met in 1962 during the only overseas trip of her life. She returned to Sydney from her seven-month journey through Asia to Britain and continental Europe almost four months' pregnant, according to Anthony Albanese's 2016 biography, "Albanese: Telling it Straight".

She was living with her parents in their local government-owned house in inner-suburban Camperdown when her only child was born on March 2, 1963.

Out of loyalty to his mother and a fear of hurting her feelings, Albanese waited until after her death in 2002 before searching for his father.

Father and son were happily united in 2009 in the father's hometown of Barletta in southern Italy. The son was in Italy for business meetings as Australia's minister for transport and infrastructure.

Anthony Albanese was a minister throughout Labor's most recent six years in power and reached his highest office – deputy prime minister – in his government's final three months, which ended with the 2013 election.

But Albanese's critics argue it's not his humble background but the left-wing politics that make him unsuitable to be prime minister.

The conservative government argued he would be the most left-wing Australian leader in almost 50 years since the crash-or-crash-through reformer Gough Whitlam, a flawed hero of the Labor Party.

In 1975, Whitlam became the only Australian prime minister to be ousted from office by a British monarch's representative in what is described as a constitutional crisis.

Whitlam had introduced during his brief but tumultuous three years in power free university education, which enabled Albanese to graduate from Sydney University with an economics degree despite his meagre financial resources.

Albanese's supporters say that while he was from Labor's so-called Socialist Left faction, he was a pragmatist with a proven ability to deal with more conservative elements of the party.

Albanese had undergone what has been described as a makeover in the past year, opting for more fashionable suits and glasses. He has also shed 18kg in what many assume is an effort to make himself more attractive to voters.

Albanese says he believed he was about to die in a two-car collision in Sydney in January last year and that was the catalyst for his healthier life choices. He had briefly resigned himself to a fate he once believed had been his father's.

After the accident, Albanese spent a night in a hospital and suffered what he described as external and internal injuries that he has not detailed. The 17-year-old boy behind the wheel of the Range Rover SUV that collided with Albanese's much smaller Toyota Camry sedan was charged with negligent driving.

Albanese said he was 12 when he became involved in his first political campaign. His fellow public housing tenants successfully defeated a local council proposal to sell their homes – a move that would have increased their rent – in a campaign that involved refusing to pay the council in a so-called rent strike.

The unpaid rent debt was forgiven, which Albanese described as a "lesson for those people who weren't part of the rent strike: solidarity works".

"As I grew up, I understood the impact that government had, can have, on making a difference to people's lives," Albanese said. "And in particular, to opportunity."