Anthony Albanese has been sworn in as Australia's 31st Prime Minister with a "Gang of Four" ministers to take control of the entire government until the ALP caucus finalises the front bench.

The Labor leader was filmed leaving his house in Marrickville with his partner Jodi and son Nathan early on Monday morning before boarding the Prime Minister's VIP plane to Canberra.

Albanese, who will fly to Tokyo with Penny Wong on Monday for the Quad leaders' summit with US, Indian and Japanese leaders, has promised to "get down to business'' with a slimmed down team of ministers.

The economic team of incoming Treasurer Jim Chalmers and Finance Minister Katy Gallagher were sworn in to their respective portfolios but will also take interim responsibility for a range of portfolios.

Albanese was sworn in shortly after 9am by the Governor General David Hurley.

"I, Anthony Norman Albanese, do solemnly and sincerely affirm and declare that I will well and truly serve the Commonwealth of Australia, her land and her people in the office of Prime Minister,'' he said.

Speaking to reporters earlier, Albanese said it was a momentous day and he was determined to hit the ground running.

"It's a big day in my life. But a big day for the country, when we change the government,'' he said.

"I want to lead a government that has the same sentiment of optimism and hope that I think defines the Australian people. I want to be positive."

Former Labor leader Bill Shorten, who is yet to be sworn in, said it was a historic moment.

"Congratulations to our new Prime Minister Anthony Albanese. A great moment for the nation and Labor,'' he said.

Albanese was hugged by his partner Jodi and 21-year-old son Nathan after he was sworn in, before making his way to the steps of Government House for a class photo. 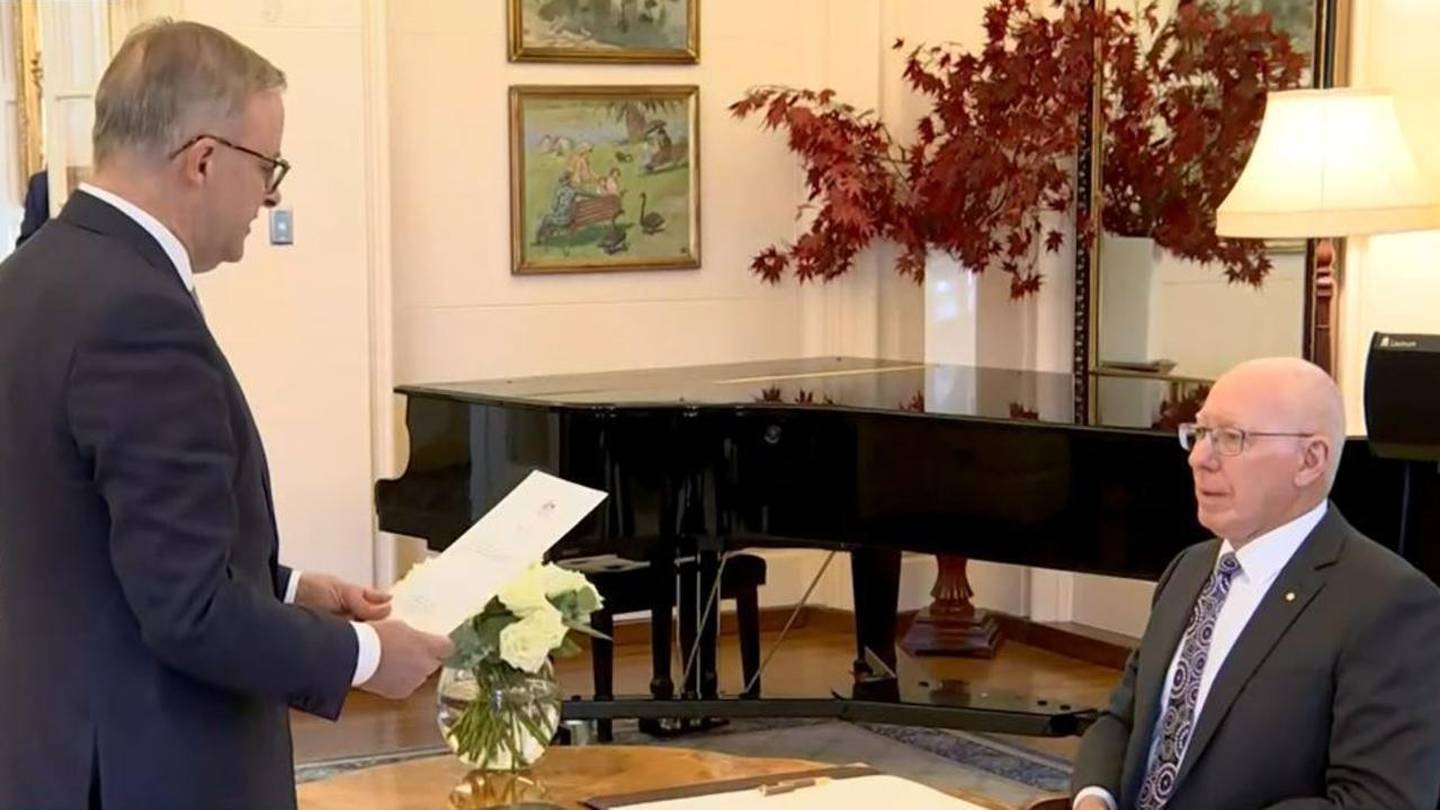 Albanese was one of four people to be sworn into government ahead of a meeting with Quad leaders in Tokyo. Photo/ news.com.au

The Gang of Four ministers have taken on multiple portfolios in the short term, until the Labor cabinet and outer ministry is finalised.

Chalmers has been sworn in as Treasurer and Senator Gallagher has become Minister for Finance, minister for women and Attorney-General.

Incoming Treasurer Jim Chalmers said the ALP remained confident of forming a majority government and would have "a lot on his plate" for the next 72 hours.

"For sure. It's not locked in yet that we'll have a majority. We're hopeful there's a handful of seats that we're pretty confident in. That we can get to 76 seats," he told the Today show.

"We inherit a lot of challenges, particularly in the economy. We've got the cost of living going through the roof. We have real wages going backwards. We'll be inheriting a trillion dollars of debt with not enough to show for it.

"The work has begun already. We want to hit the ground running."

Chalmers said it was "a very different election result in that there's no time for partying."

"Everyone is getting on with it."

Labor would "absolutely" back an increase to the minimum wage, he said.

"We absolutely support a minimum-wage increase that keeps up with the cost of living,'' he said.

"Many of them (low income workers) are the heroes of the pandemic. We absolutely support an outcome at the Fair Work Commission which recognises that inflation is going through the roof and people need to catch up with that."

Albanese confirmed he had spoken to US President Biden and said the talks were crucial.

"It enables us to send a message to the world that there is a change of government, there will be some changes in policy, particularly with regard to climate change and our engagement with the world on those issues," he said.