Experts have issued a dire warning for Australians still reeling from the ferocious bushfires that have raged across the country for months – get used to it.

In response to the crisis, a team of scientists in the United Kingdom convened last month to conduct a "rapid response review" of 57 different pieces of research conducted since 2013.

And extreme conditions that fuelled the spread of ferocious and deadly blazes, described by fire chiefs as "unprecedented", are set to become our new norm.

Professor Richard Betts, head of climate impacts research at the Met Office Hadley Centre and University of Exeter, said human-induced climate change will cause an extra 20 to 30 severe fire danger days each year in the future. 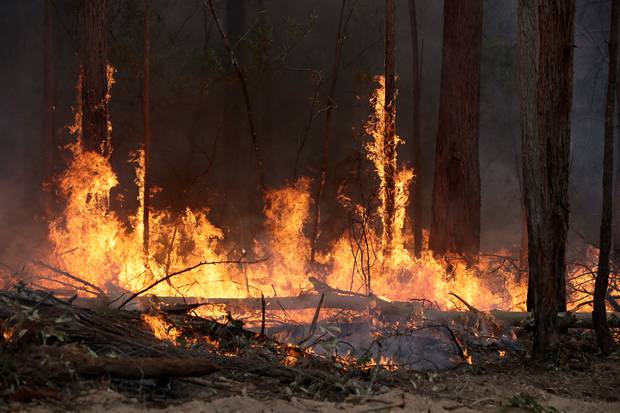 Flames from a controlled fire burn up tree trunks as firefighters work at building a containment line at a wildfire near Bodalla, Australia. Photo / AP

Through December and the start of January, multiple states experienced severe, extreme and catastrophic fire warning days – determined a long-established index that fire services rely on.

The catastrophic rating was added after the Black Saturday bushfires in Victoria because conditions experienced had never been seen before and exceeded measurements available.

"This catastrophic category has occurred in the recent days and weeks, but even below that, many areas have been categorised as severe and extreme," Professor Betts said.

Based on the analysis of current research, it's possible to develop future projections on fire weather, he said – and it's not good.

Severe and extreme fire warnings will become more common and "will be normal under a global warming world of three degrees or more", he said.

"Temperature is a key factor, both on the day (of a bushfire) and in the days and weeks before because high temperatures will have dried out the fuel.

"Hot and dry conditions make fires more likely when they're ignited for whatever cause, whether it's by people or lightning.

"The world is warmer because of global warming, so when you get hot and dry conditions (naturally), they're even hotter because of (climate change).

"We know that Australia has had its hottest year on record. In fact, Australia is 1.4 degrees Celsius warmer now than pre-Industrial (Revolution) conditions. That's more than the global average." 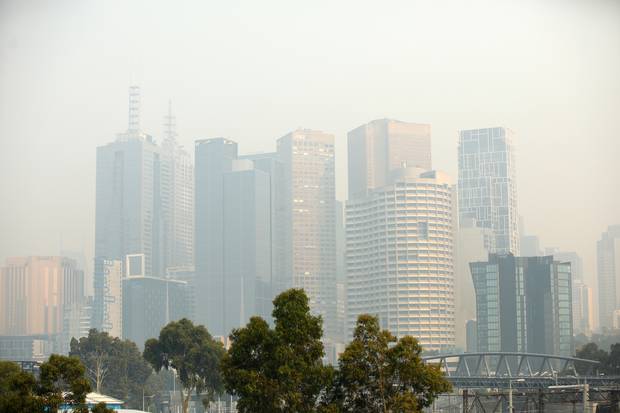 A general view of the city shrouded in smoke at Melbourne Park. Photo / Getty Images

The link between climate change and the intensity of this bushfire season has been a source of debate in politics and sections of the broader community for months.

But the science on the connection between the two is clear.

"All 57 papers show links between climate change and increased frequency or severity of fire weather," Matthew Jones, senior research associate at the Tyndell Centre for Climate Research at the University of East Anglia, said.

"Fire weather is becoming more frequent and severe in Australia.

"Overall, our review finds that climate change increases the frequency and severity of fire weather globally and thus increases the risk of fire occurring."

Today, Federal Science Minister Karen Andrews announced she would convene a meeting of top scientists to develop a response to the "devastating and surprising" bushfire season.

"Every second we spend discussing if climate change is real is a second we don't spend addressing these issues. Let's move on and get over this," Ms Andrews said in an interview with The Sydney Morning Herald.

"My starting position in the discussion tomorrow will be that the climate has changed and it continues to change. We need to focus on the steps to adapt and mitigate the impact of those changes."

Dr Jones said the review focused chiefly on the effects of climate change on fire weather, rather than fire counts or burned area.

"Area burnt and fire activity depend not only on fire weather but also on ignition sources and land management decisions," he pointed out.

However, increases in average temperatures globally, as well as the extent and intensity of heatwaves, and longer periods of drought are making fire weather much more likely.

Australian bushfire experts through to state-based fire chiefs have described the past few months as "unprecedented" in terms of the scale and intensity of the disaster.

Professor Betts said scientists "can be confident" that conditions in Australia have been made hotter by man-made climate change.

If global warming can be constrained, limiting increased temperatures to 2C or less, than the fire weather risk can be minimised.

"Overall, our review finds that climate change increases the frequency and severity of fire weather globally and thus increases the risk of fire occurring," he said.

"However, at least historically, humans are capable of moderating the fire risk … in recent decades, land management decisions have overall suppressed fire globally."